Background: Cardiovascular diseases are rapidly emerging as major cause of mortality and disability in India. Existing Risk Calculators for Cardiovascular Risk have not undergone appropriate validation in Indian Patients. Present Study was undertaken to compare different cardiovascular calculators for CVD risk assessment models in Indian patients presenting with first episode of myocardial infarction.

Conclusion: FRS seems to be as most useful CVD risk assessment tool in identification of Indian patients at high Cardiovascular Risk.

India is in the throes of a Cardiovascular epidemic. South Asians have been seen to have higher risk of CV disease as compared to other populations [1-7]. Several Studies have shown that Cardiovascular risk among Indians is several times higher than in other ethnic groups and at least four times that of Caucasians [8,9]. Indians tend to develop CVD at a younger age (approximately 10 years) compared to others [5,6]. Both the genetic make-up and the early onset of conventional CV risk factors are believed to contribute to this excess risk [4,6].

While most of these risk estimation models have used some south Asian cohort for their derivation, None of the available risk prediction models have been prospectively validated in Indian patients. Some studies [15-18] have attempted to assess discriminating ability of CVD risk score to diagnose high risk patients (those with established Cardiovascular disease or MI) in Indian patients with conflicting results. Most of these validation studies have used older versions of AHA Risk Score, which has recently been updated [14] with new cohort data and none of these studies include comparative study of discriminaton of these Rsk scores.

Our Cohort included 150 consecutive patients admitted in coronary care unit of a tertiary Hospital between Jan 2018 to Jan 2019 with first episode of Myocardial infarction.

The diagnosis Of MI was based on 3rd universal definition of MI. All patients were admitted and managed according to current guidelines for the management of MI

History and clinical examination were done in each patent especially with respect to the presence of significant CVD risk factors.Physical examination consisted of General Physical examination and examination of Cardiovascular (CV) system. Height and body weight were measured and body mass index (BMI) was calculated. Smoking, diabetes and hypertension were defined according to the National Health Interview Survey (NHIS).

Biochemical parameters Fasting and Random blood sugar, Lipid profile was performed in every patient. Systolic and diastolic Blood pressure was recorded in each patient. Ethical clearance for the study was taken from the institutional ethical committee.

Three risk calculators (Risk FRS, WHO ISH RISK and Risk ACC/AHA) were used to calculate 10-year risk of having a major CV event (CV death, MI or stroke) for every patent. In Risk ACC/AHA calculator, the race was taken into account as an additional factor.

Statistical analysis was carried out by using R version 3.5.0. Values are expressed as mean± standard deviation or as percentages. Pearson’s correlation coefficient (r) was estimated to assess correlation between fRS and ASCVD. Kappa Score was calculated to determine agreement between various subcategories of CV Risk. Bland Altman Plot was constructed to determine bias and variation between FRS and ASCVD Risk Scores. A p-value <0.05 was considered statistically significant.

Our cohort consisted of Patients who presented with first episode of MI. Some socio-demographic characteristics of our cohort was as follows :

Around 30 % patients were Alcoholic and had a Family history of CAD, Around 40% were Diabetics. Population was predominantly Male (75.3%) and 42% were Actively Smoking.

Lipid Parameters were as follows :

Further Details of Baseline Variables are Provided in Table 1.

The Scores were as Follows.

The number of patients in various subcategories of 10 years risk scores were as follows:

The agreement plot between FRS and ASCVD in Figure 1. 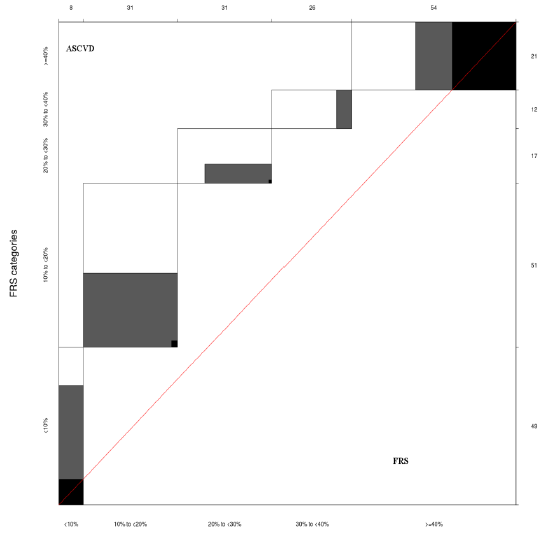 Bland-Altman analysis was performed to compare FRS with ASCVD. There were 150 observations in our study. The mean risk percentage by FRS was 36.42 .The mean risk percentage by ASCVD was 19.69. There was a mean bias of 16.73 (95% C.I. 15.23 - 18.23) and 95% confidence limits of Agreement from a lower limit of -1.53 to upper limit of 35 implying 95% of differences between the two methods were found in this range. The mean proportional bias was 68.7 % with a 95% Confidence Limit of 66.21 % to 75.52 %. The difference between methods as a function of mean of two methods can be described by the equation y(differences) = 0.34 x(means) + 7.3 implying difference between two measures changes by 0.34 unit with a 1 unit increase in average of cardiovascular risk percentage calculated by two formulas. The Bland Altman Plot between FRS and ASCVD in Figure 2. 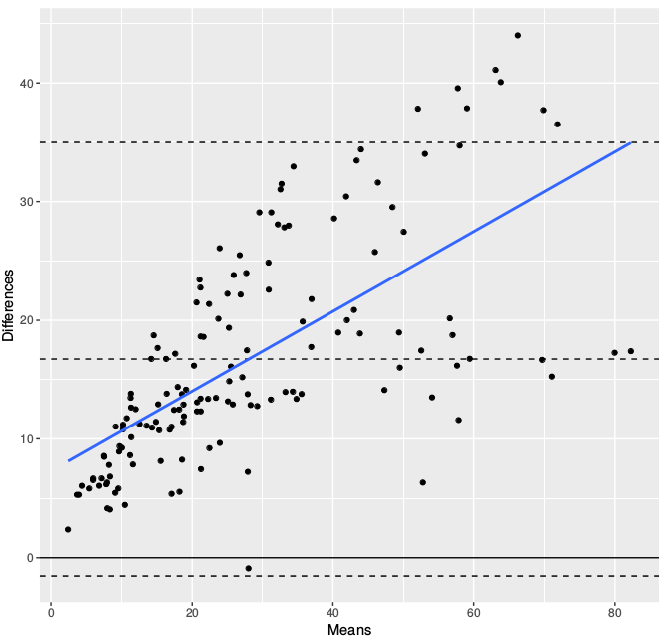 While the correlation between FRS and AHA Risk calculator is good, agreement between their subcategories is poor which shows disadvantages of categorizing continuous data. Thus instead of using deciles of cardiovascular risk categories, absolute measures should be used and reported.

Our findings are similar to Study by Bansal and Garg where all risk Scores underestimated the 10 year Cardiovascular Risk to varying degrees. Thus we should consider looking at non-conventional measures like CIMT, hsCRP, Coronary Artery Calcium for better estimation. Our Population was slightly older to relatively younger cohort in binoo et al. (mean 36 years) but similar to Bansal and Garg et al. (mean 55-60 years) [15,16].

The strengths of our study is the use of newer AHA Pooled Cohort equation for risk estimation and analysis of evaluation of the agreement between categories of these scores by Kappa Scores and Bland Altman Plot, which has not been done previously to our knowledge in existing literature.

Our study has some limitations - These tools should ideally be measured at baseline and then cohort should be followed up in time for better assessment of risk with time. In our study we used First MI as retrospective proxy for patients with high risk. FRS-CVD is aslo not directly comparable to other tools and may not perform the best in Indians if the same outcomes were to be measured with other scores used in this study.