Frequency of Atrial Fibrillation in Patients of Hypertension

Objective: To determine the frequency of AF in patients of hypertension. Material and methods: It is a cross-sectional study done in Punjab Institute of Cardiology, Lahore and CPE Institute of Cardiology Multan during a duration of six months from 07/02/2020 to 07/08/2020. Data collection: Patients with BP>140/90 mmHg were included. Later on, ECG was taken on a standard 12 lead format. Presence of AF was confirmed. All the data was recorded in a pre-structured proforma.

Conclusion: The frequency of AF is low in hypertensive patients but the value is not ignorable. Periodical screening of AF is required to prevent hazardous consequences.

Hypertension is a well-recognized risk factor for cardiovascular and renal diseases; moreover, even slightly elevated blood pressure (BP) levels lead to increased risk in cardiovascular diseases (CVD) or stroke. Hence, it is one of the leading causes of global burden of disease. As age is an important risk factor for hypertension, the population aging in Western countries exacerbates the situation [1]. The prevalence of hypertension differs substantially by regions [2]. Substantial differences (relative difference >10%) in the prevalence of hypertension were indicated by age group, race/ethnicity, educational attainment, country of birth, family income, health insurance, diabetes, obesity, and disability status [3]. Pakistan National Health Survey showed that the prevalence of hypertension increased from <10% in 18-19 years old to >60% in over 70 years age in males and similarly in females it increased from <5% at 18-19 years to a peak of 70% in 60-69 years age, the prevalence being higher in the female compared to male [4, 5]. There are different risk factors and clinical conditions predisposing to the development of AF, but due to its high prevalence, hypertension is still the main risk factor for the development of AF. Several pathophysiologic mechanisms (like structural changes, neuro hormonal activation, fibrosis, atherosclerosis, etc.) have been advocated to explain the onset of AF. The presence of AF per se increases the risk of stroke but its coexistence with high blood pressure leads to an abrupt increase of cardiovascular complications [6].

Moreover, the activation of renin–angiotensin–aldosterone system activation in patients with hypertension induces left atrial fibrosis and conduction block in the left atrium, resulting in the development of AF. Accordingly, recent studies have shown that effective blockage of renin–angiotensin–aldosterone system by angiotensin converting enzyme inhibitors or angiotensin receptor antagonist may be effective in both primary and secondary prevention of AF in patients with hypertension, although with controversies. In addition, optimal antithrombotic therapy, blood pressure control as well as rate control for AF are key to the management of patients with AF [7].

To determine the frequency of AF in patients who are presenting with hypertension.

Sample size of 200 cases is estimated using 95% confidence level and 6% margin of error taking expected frequency of AF as 14%.

Patients of age between 20-60 years of both genders with hypertension (BP≥140/90 mmHg 4 hours apart on two occasions) diagnosed at least 6 months ago.

2.7 Exclusion Criteria: Patients with bleeding disorders, congenital abnormalities, already undergone CABG or who have been treated for any cardiac disease were excluded from the study.

All the patients were evaluated for the history of taking anti-hypertensive medication at the time of presentation of patients. Later on, ECG was taken on a standard 12 lead format (electrocardiogram model ECG-1112 Carewell electronics, Shenzhen). Presence of AF was confirmed as there is no p wave present on 12 lead ECG and unequal R-R interval and QRS complex <120 ms. All the data was recorded in a pre-structured proforma. Patients with AF were managed as per hospital protocol.

Descriptive statistics for data would be computed using SPSS version 21. Frequency and percentages would be calculated for categorical variables like gender, diabetes and AF. Mean ± S.D would be calculated for continuous variables like age and duration of hypertension. Data was stratified for (i) age, (ii) gender, (iii) diabetes (iv) duration of hypertension and (v) medication for hypertension to control effect modifiers. Post stratification chi square test was applied keeping a –value < 0.05 as significant. 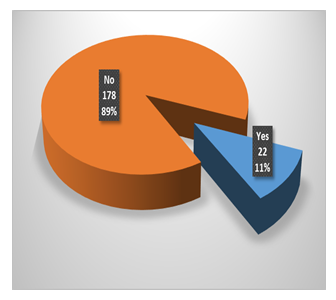 AF is the most frequently occurring sustained cardiac arrhythmia and is related to many cardiac diseases. Patients with hypertension have an increased risk of developing AF of 42% and patients with AF have increased cardiovascular morbidity and mortality. Due to the high prevalence of hypertension, it accounts for more cases of AF than any other risk factor. Hypertension is associated with left ventricular hypertrophy, impaired ventricular filling, slowing of atrial conduction velocity, structural changes and enlargement of the left atria [11]. All these changes in cardiac structure and physiology favor development of AF and increase the risk of thromboembolic complications. In the following we will review possible mechanisms for the increased risk of AF in hypertensive patients and look into the effect of different anti-hypertensive treatment with special focus on blockade of the renin-angiotensin-system [12]. AF is a disease of aging as its prevalence doubles with each decade after 50 years and approaches 10% in those more than 80 years of age. As the general population is aging, the prevalence of AF is expected to rise in the future and methods to prevent or to postpone AF development may be of clinical, prognostic, and economic importance. However, prevention is a new strategy in the treatment of AF as it earlier has been more focus on rate and rhythm-control and anticoagulation therapy to prevent cardiovascular endpoints [13].

In 21st century, AF an “old” arrhythmia that was first identified in 1909 has assumed increasing importance as the global demographic tide results in a burgeoning population of elderly individuals. Indeed, Braunwald, in his Shattuck lecture, referred to the growing “epidemic” of AF. The impact of AF on mortality and morbidity is substantial, as are the socio-economic consequences in relationship to hospital admissions, chronic disease management and disabilities [14, 15]. These adverse trends, nonetheless, are superimposed on a background of potentially exciting new therapeutic options. Consequently, an understanding of the epidemiology and natural history of AF is crucial to the future allocation of resources and the utilization of an expanding range of therapies aimed at reducing the impact of this disease on a changing patient population [16].

AF currently affects approximately 2.2 million patients in the U.S. and is the most common rhythm disorder among U.S. patients hospitalized with a primary diagnosis of an arrhythmia [17, 18]. The median age of patients is 75 years; approximately 70% of patients are between the ages of 65 and 85 years, and 84% are older than 65 years [17]. Pooled data from studies of chronic AF in North America, Britain and Iceland suggest a prevalence of 0.5% to 1% in the general population [19]. In two separate studies restricted to patients older than 60 years, the prevalence was 5% to 9% after 5 to 15 years of follow-up [20]. Thus, the genesis of this epidemic was initially attributed to alterations in the age-related composition of the population, with an expanding elderly population accounting for the increasing incidence and prevalence of AF. However, during the past two decades, additional factors seem to have influenced the frequency of this disease. The Framingham study found an increasing prevalence of AF even after adjusting for age, gender and other comorbidities; but underlying explanations are unclear, and further studies in other populations are needed. From a recent population-based study in subjects older than 65 years, the prevalence in men (9.1%) was greater than that in women (4.8%) [21, 22].

In the Framingham study, after adjustment for age and other risk factors, AF developed in men at 1.5 times the rate in women. The reason for the greater susceptibility to AF in men is unexplained. Previous reports indicate that prevalence of AF in western populations is generally greater than Asian populations [23, 24]. There was no clear explanation for this but it could be related to genetic predisposition reported by previous studies on specific polymorphisms that related to AF [25]. A study was planned to find prevalence of AF in the Thai hypertensive population since hypertension is a common cardiovascular risk factor and predisposes individuals to AF [25].

Prevalence of AF increases with age due to degenerative process of the atrial muscle and conducting cells [21]. The results of our study were different with those conducted on both western and other Asian populations. The finding on more predominance in males is also consistent with previous reports [22]. We noticed a significant interaction of age and gender on the prevalence of AF. Male gender was more likely to have AF compared to female in the age group less than 60 years, but no such association after the age of 70. This finding was not found in previous reports from Europe and United States. However, similar interaction has been reported from Taiwan. Therefore, the effect of male gender on the increased prevalence of AF in Asian population may disappear after the age of 70 years [23].