Background: The role of adenosine as cardio protective factor is well established. Adenosine deaminase (ADA) contributes to the control of adenosine concentration in body fluids and, as ecto-enzyme, to the regulation of adenosine receptors activity. ADA and adenosine receptors expressions have been found down regulated in heart failure. We have studied the relationship between genetic variability within the ADA gene and left ventricular ejection fraction (LVEF).

Methods: The genotypes of three polymorphic sites (SNPs) within the ADA gene have been determined in 346 patients admitted to the hospital for cardiovascular diseases. Informed consent was obtained by the patients to participate to the study that was approved by the Council of Department of Biomedicine and Prevention. The three polymorphic sites in the ADA gene are called ADA1, ADA2 and ADA6. Each locus shows two alleles called ADA1*1 and ADA1*2, ADA2*1 and ADA2*2, ADA6*1 and ADA6*2 respectively.

Conclusions: The study of polymorphic sites of ADA gene could allow to detect subjects with higher risk of cardiac failure following infarction.

The role of adenosine as cardio protective factor is well established [1-3]. Adenosine deaminase (ADA) and adenosine kinase activities contribute to the regulation of adenosine concentration in body fluids. Adenosine binds to specific receptors: A1, A2, A3. A1 and A3 act through Gi protein and A2A and A2B through Gs protein. ADA and adenosine receptors have been found down regulated in heart failure [4].

ADA is localized on human chromosome 20q and consists of 13 exons distributed approximately on 32 Kb of DNA [5]. A number of differences among normal sequences have been found within the coding and the intronic regions of ADA gene [6]. The SNP corresponding to the presence/absence of a Taq 1 site (nt 4050-4053) in exon 1 is associated to a known functional variation and represents the basis of the common biochemical polymorphisms at ADA locus described by Spencer et al. [7]. This polymorphism is due to the presence of two common alleles ADA1*1 and ADA1*2: the corresponding phenotypes have enzymatic activity decreasing in the order: ADA11 > ADA1 21 > ADA1 2 [7]. The function of the other SNPs observed in the ADA gene has not yet been elucidated. Recent studies suggest a role of genetic variability within the ADA gene on susceptibility to coronary artery disease [8,9].

ADA is not only a cytosolic enzyme but acts as an ecto-enzyme also being present in the surface of many cell types where it regulates the extracellular concentration of adenosine and modulates the activity of receptors through interaction with other molecules [10].

We reasoned that the role of ADA in the cardiac function could be due not only to enzymatic activity i.e. the regulation of adenosine concentration, but also to ecto-enzymatic activity through interactions with adenosine receptors. Genetic variability of other sites besides the Taq 1 site in exon 1 could have an important role in this context and could influence the susceptibility to heart failure.

In the present study we have investigated three polymorphic sites (SNPs) spanning approximately 28 Kb in ADA gene in relation to the value of left ventricular ejection fraction (LVEF) an important index of cardiac function. Besides the SNP of exon 1 we have studied the Pst 1 site (ADA2) (nt 19465-19470) of intron 2 and the MluNI site (ADA6) (nt 31230-31235) of exon 6 [11].

We have studied 346 patients admitted consecutively to the Hospital for Cardiovascular diseases (see Table 1). All subjects were from the White population of Rome. Venous blood samples were obtained after informed consent was acquired from all subjects to carry out the present study that was approved by the Council of Department of Biomedicine and Prevention . The data were collected a few years ago before the institution of an Ethical Committee. All procedures followed were in accordance with the ethical standards and with the Helsinki Declaration of 1964 and its later amendments. The number of subjects is not the same in all tables owing to random missing the data for some variables. 224 blood donors were also studied as controls.

ADA genotypes were determined by RFLP-PCR. Genomic DNA was extracted from venous blood samples collected in NaEDTA using the procedure described by Kunkel [12] with slight modifications. PCR amplification was carried out as described by Hirschhorn  [11]. The details of the procedure and primers have been reported in a previous paper [13]. The alleles corresponding to the presence (+) and absence (-) of the restriction sites have been indicated as allele *1 and allele *2 respectively.

Statistical analyses were carried out by commercial software (SPSS).

Table 4: The association of LVEF with the joint “ADA2*2 carrier-ADA6 *2/*2 genotype”. Comparison between patients with CAD and patients without CAD.

Table 5: The relationship of joint “ADA2*2 carrier-ADA6*2/*2 genotype” with LVEF divided into 3 classes in patients with CAD. 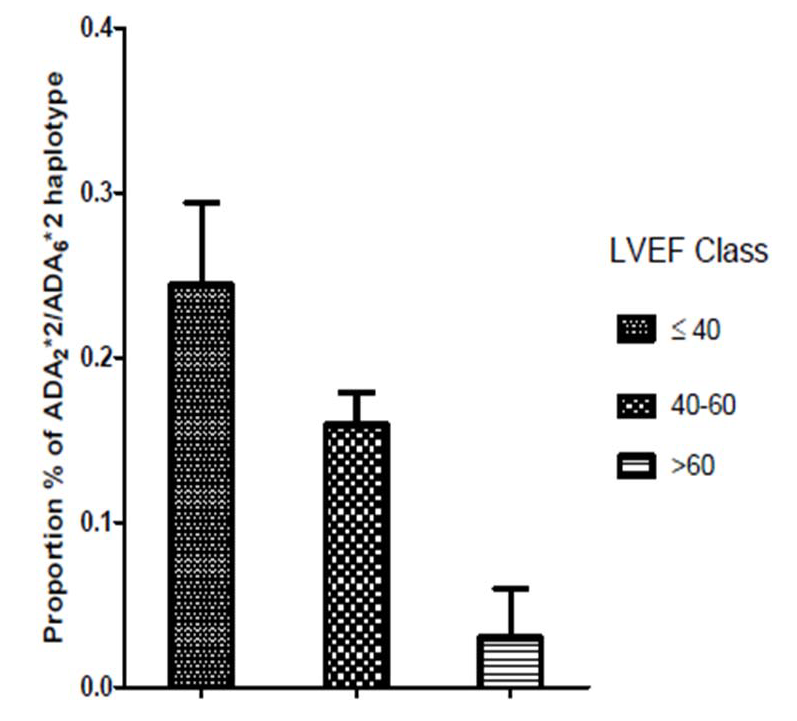 Figure 1: Proportion of ADA2*2/ADA6*2 haplotype in relation to LVEF class in patients with CAD

The present data suggest that in the genomic area of ADA there are sites that influence LVEF. in patients with CAD. Such association is independent by other factors associated with LVEF. No correlation with the type of treatment was observed.

Since ADA2 is an intronic polymorphism and ADA6 is a synonymous substitution, these DNA modifications do not change ADA protein sequence. The association of LVEF with ADA2-ADA6 haplotype could be due to some causal site included in this area. At present, however, cannot be excluded that genetic variability in this area influences ADA enzymatic activity and in turn adenosine concentration. It is also possible that sites in this area control aminoacid sequence of the ADA protein involved in ADA properties as ecto-enzyme.

From a practical point of view, the study of polymorphic sites of ADA gene could allow to detect subjects with higher risk of cardiac failure following infarction. Further investigation of this genomic area could be rewarding.

The relatively small number of subjects examined represents the limitation of the study.