Left ventricular (LV) aneurysm is a serious mechanical complication following acute myocardial infarction (MI). Approximately 85% of true LV aneurysms are located at the apical and anteroseptal wall. They are associated with increased morbidity and mortality due to complications that can potentially occur, including heart failure, thromboembolism and tachyarrhythmias. As the need for prompt treatment is vital, transthoracic echocardiography, contrast echocardiography, computed tomography (CT) and cardiac magnetic resonance (CMR) are the preferred noninvasive modalities used for the diagnosis. The incidence of LV aneurysm as a complication of acute myocardial infarction has declined, primarily thanks to the advances in percutaneous coronary intervention and early revascularization. We report the case of a large LV apical aneurysm in a patient with a delayed presentation after ST-elevation myocardial infarction during the COVID-19 pandemic. A 60-year-old female with history of previous anterior myocardial infarction with delayed revascularization presented to the emergency department with worsening shortness of breath, orthopnea and marked limitation of physical activity. The transthoracic echocardiogram that was conducted revealed a giant LV aneurysm located at the apex as well as a markedly reduced left ventricular ejection fraction. Contrast echo-cardiography and cardiac CT were used to confirm these findings while CMR also provided accurate measurements of left ventricular volumes and mass. In addition, the extent of myocardial scar tissue and viability of the other regions of left ventricle were identified. The patient underwent a successful left ventricular reconstructive surgery leading to a significant functional status improvement.

Left ventricular aneurysms are a late mechanical complication of acute myocardial infarction and represent a full-thickness infarct that has been replaced by fibrous tissue [1]. Aneurysms of the apex and anterior wall are more common than those of the inferior or inferoposterior walls. They are associated with impaired survival due to the serious complications that can potentially occur, including heart failure and ischemia, ventricular arrythmias, thromboembolism, ventricular rupture and cardiac tamponade [2]. A true aneurysm is formed by full- thickness bulging of the ventricular wall, while a false ventricular aneurysm is secondary to a myocardial rupture which is contained by localized pericardial adhesions and scar tissue [1].

Although it was previously estimated that a left ventricular aneurysm develops in up to 35% of acute transmural myocardial infarction, thanks to the advances in percutaneous coronary intervention and the early initiation of therapeutic strategies to prevent or even reverse cardiac remodeling, LV aneurysms and false aneurysms have been less commonly identified with an incidence of 8-15% in such patients [3]. However, during the COVID-19 pandemic we are witnessing an increase in post- infarction complications due to delayed presentation and revascularization, since even symptomatic patients tend to stay at home for fear of being exposed to severe acute respiratory syndrome coronavirus 2 (SARS-CoV-2) [4].

A 60-year old female presented to our emergency department (ED) with worsening shortness of breath during the last two weeks and orthopnea that began two days prior to admission. She had a medical history of chronic cigarette smoking, arterial hypertension, dyslipidemia, hypothyroidism and known coronary artery disease. Two months ago she had suffered an anterior myocardial infarction with delayed revascularization due to late presentation to the emergency department, two days after the onset of symptoms for fear of contracting COVID-19. Coronary angiography had shown a subocclusive lesion of the mid segment of left anterior descending artery that was treated by stent implantation with optimal angiographic results (Figure 1, Figure 2). Her medication consisted of dual antiplatelet therapy (aspirin and clopidogrel), atorvastatin, pantoprazole, bisoprolol, ivabradine, ramipril and levothyroxine. The electrocardiogram revealed Q waves and ST segment elevation in the anterior leads while high- sensitivity troponin levels were normal. On arrival at the ED, her blood pressure was 95/70mmHg with heart rate of 110 beats per minute and her oxygen saturation was 94% on room air. Clinical examination revealed a holosystolic murmur, loudest over the left lower sternal edge and elevated jugular venous pressure. There were no radio-radial or radio- femoral delays. Lung auscultation was pertinent for bibasilar crackles and the chest X-ray was suggestive of pulmonary venous congestion. Transthoracic echocardiogram revealed a giant anteroapical left ventricular aneurysm with a markedly reduced LV ejection fraction of 20% (Video 1). The right ventricular systolic function was normal, with an elevated right ventricular systolic pressure of 50 mmHg. The patient was treated with intravenous diuretic therapy and showed significant symptomatic improvement during the following days with no evidence of ventricular tachyarrythmias on Holter rhythm monitoring. Contrast echocardiography enabled the accurate definition of the cavity and the aneurysm and confirmed the absence of a thrombus formation (Video 2).

A cardiac CT was performed that confirmed the diagnosis of the left ventricular aneurysm and enabled multiplanar reconstruction of the heart providing an impressive image of left ventricular morphology (Figure 3, Video 3). Additionally, CMR was conducted, since it is considered the gold standard for LV morphological and functional assessment thanks to its accurate measurements of the entire volume and mass. It depicted a large true anteroapical left ventricular aneurysm and a LVEF of 15%. CMR also helped identify the extent of myocardial scar tissue and viability of the other regions of the left ventricle. The patient underwent a successful left ventricular reconstruction using the endoventricular circular patch plasty, known as the Dor procedure (Figure 4). In the follow-up assessment, two weeks after surgery, the patient’s functional status and cardiac performance were significantly improved, as indicated by increased LV ejection fraction and reduced LV end-diastolic pressure. The echocardiographic evaluation revealed akinesia limited to the apex and a LVEF of 40% (Video 4, Video 5, Video 6). 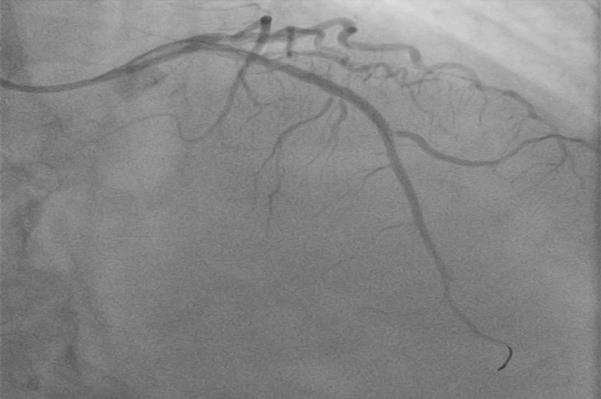 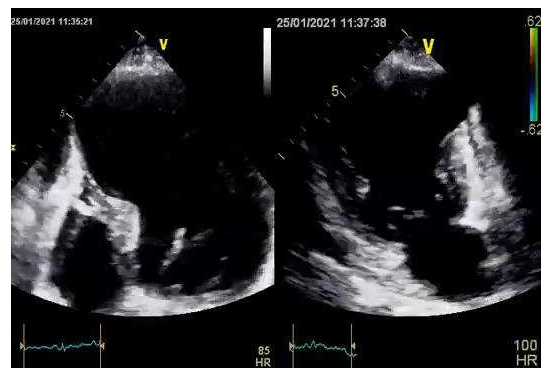 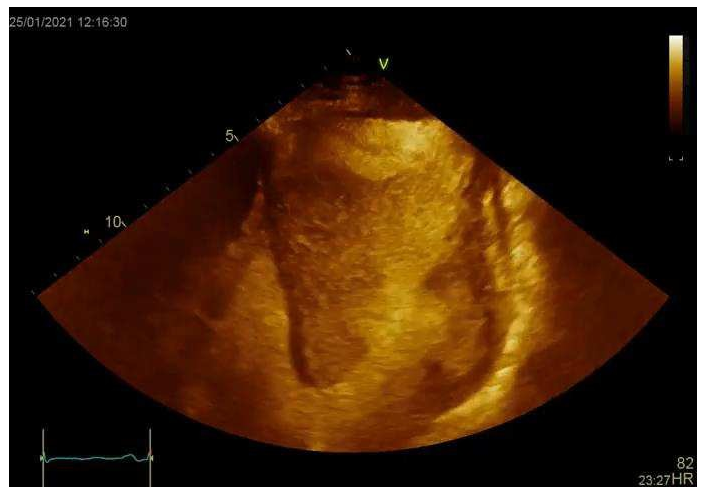 Video 2: Contrast echocardiography. Note the improved endocardial border definition as well as the absence of a mural thrombus. 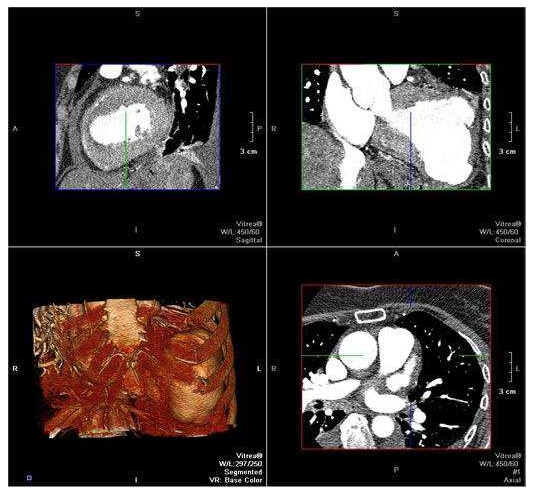 Figure 3: A cardiac CT was conducted that also confirmed the presence of a giant anteroapical left ventricular aneurysm. 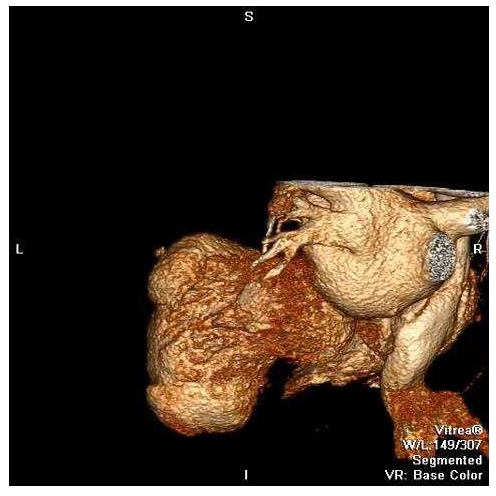 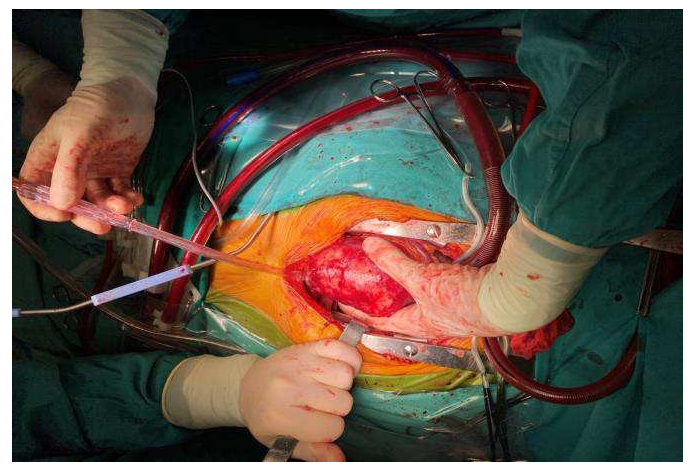 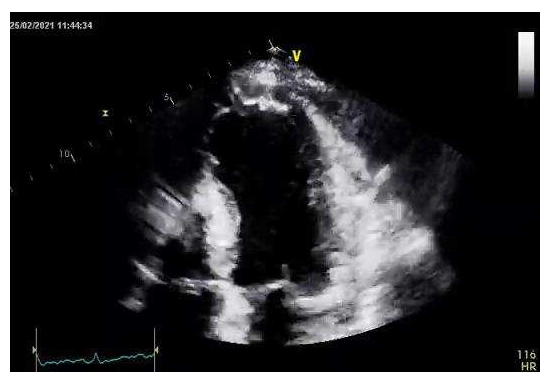 Video 4: Transthoracic echocardiogram after a successful left ventricular reconstruction (Dor procedure) with the use of pericardial patch. The evaluation revealed akinesia limited to the apex. 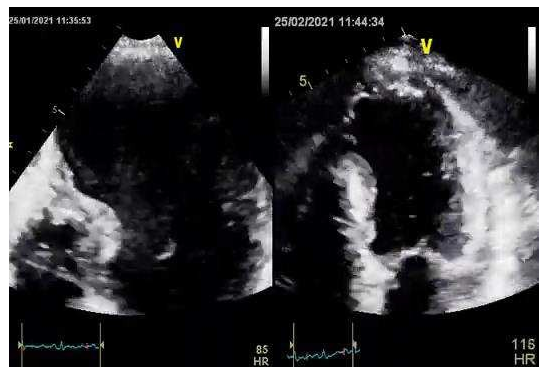 Video 5: Transthoracic echocardiogram before and after surgery illustrating the improved cardiac performance and the restored left ventricular geometry. 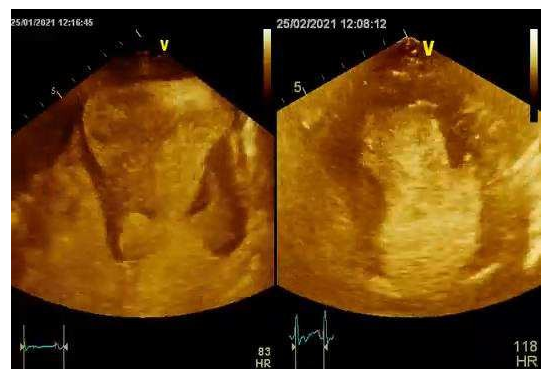 Video 6: Contrast echocardiography before and after surgery showing the improved cardiac performance.

We report the case of a patient with a giant left ventricular aneurysm following a delayed anterior STEMI presentation. A true LV aneurysm is defined as a well delineated, thin, scarred or fibrotic wall, being a result of a healed transmural infarction [3]. Total occlusion of the left anterior descending artery, lack of collateral circulation, failure to achieve patency of infarct site artery, elevated wall stress, hypertension and ventricular dilation are important

risk factors contributing to the development of LV aneurysms which are usually located at the apical and anteroseptal wall. A true LV aneurysm can occur as early as within 48 hours or two weeks post-infarction. At the early expansion phase the migration of inflammatory cells in the infarct zone, the lysis of the necrotic myocytes, the disruption of the collagen fibers and the presence of extravascular hemorrhage contribute to the development of the LV aneurysm. At the late remodeling phase, 2 to 4 weeks after myocardial infarction, vascularized granulation tissue appears and 6 to 8 weeks post-infarction, myocardium is replaced by fibrous tissue [1]. Thanks to the advances in percutaneous coronary intervention and the early initiation of therapeutic strategies to prevent or even reverse cardiac remodeling, LV aneurysms and false aneurysms have been less commonly identified.

However, in the COVID-19 pandemic era patients tend to wait significantly longer to seek medical treatment for acute myocardial infarction, leading to delayed revascularization and increasing the risks for future complications [5]. The development of mechanical complications, including LV aneurysms, is associated with impaired short-term and long-term survival. Echocardiography, particularly contrast echocardiography, is an important imaging modality for LV aneurysms. Cardiac CT is another valuable diagnostic tool providing a better view of the aneurysm wall and the presence of mural thrombus. Cardiac magnetic resonance imaging allows simultaneous anatomical and functional evaluation, as well as tissue characterization [6]. It provides accurate measurements of left ventricular volume, mass and helps identify the extent of myocardial scar tissue and viability of the other regions of the left ventricle. CMR is quite accurate in the assessment of LV aneurysm resectability. Surgery is indicated in the presence of a large aneurysm in a symptomatic patient, particularly when persistent angina, refractory heart failure, thromboembolism or life- threatening tachyarrhythmias occur. Different surgical techniques have been used for the LV restoration, depending on the location and size of the aneurysm, the scarred tissue and the left ventricular dimensions. The first successful surgical treatment of a left ventricular aneurysm, by Wieting in 1912, involved the ligation of a congenital form of LV aneurysm. Nowadays, the Dor technique is widely considered to be the treatment of choice, as in the case we are describing. Reconstructive surgery leads to improvement in LV geometry and the reduction in left ventricular wall stress. It results in reverse remodeling of the entire left ventricle and contributes to the significant improvement in cardiac performance [7].

All authors declare that there is no conflict of interest.

Nowadays, the incidence of MI-related complications is increasing due to delayed revascularization as patients tend to avoid early medical care for fear of contracting the new coronavirus. It is crucial for healthcare providers to be able to recognize all the potential post-infarction mechanical complications including the formation of left ventricular aneurysms, using echocardiography, CT and CMR as valuable diagnostic tools. The management of apical aneurysms aims to prevent heart failure, ventricular arrythmias, thromboembolism, or even ventricular rupture and cardiac tamponade. A large LV aneurysm in a symptomatic patient, particularly one with angina pectoris or heart failure, is an indication for operation. Surgical management is also indicated when documented expansion, rupture, pseudoaneurysm, thromboembolism or life- threatening tachyarrhythmias occur. Surgery should be performed in centers with a high surgical experience in order to correct the size and geometry of the left ventricle, reduce wall tension and improve pump function, functional status and survival.