Hibernating myocardium is important sequelae of ischemic heart disease causing reversible cause of morbidity in the form of systolic dysfunction. LV dysfunction need not always represent dead myocardium. Differentiation between viable and non-viable myocardium has to be accurate for proper planning of the further management of the patients with post ischemic left ventricular dysfunction.

Our case is a 62y old male- a retired businessman by profession presented with complaints of mild chest pain, breathlessness and exercise intolerance for past 6 month. He was a known diabetic and hypertensive on regular medication and adequate control. ECG showed preserved QT dispersion and mild ST segment elevation. Echo showed significantly reduced ejection fraction ~28%. CT coronary angiography showed severe stenosis of the origin of right coronary and left circumflex arteries. PET CT with ammonia perfusion and FDG viability was done to identify the percentage of viable myocardium to plan for revascularisation. NH3 Perfusion scan showed defect in the basal inferior segment with corresponding uptake in the FDG PET suggesting mismatch which is indicative of viable but hibernating myocardium. Multiparametric cardiac MRI was done within 48 hours to compare with the PET CT findings. CINE sequence in the end diastolic phase demonstrated normal myocardial thickness (~5.3 mm) with reduced segmental motion of the basal inferior segment. Delayed enhancement of the corresponding segment noted indicating scar in subendocardial location with ~27% transmural extension. Tagging sequence also showed poor grid movement and crunching in the basal inferior segment. 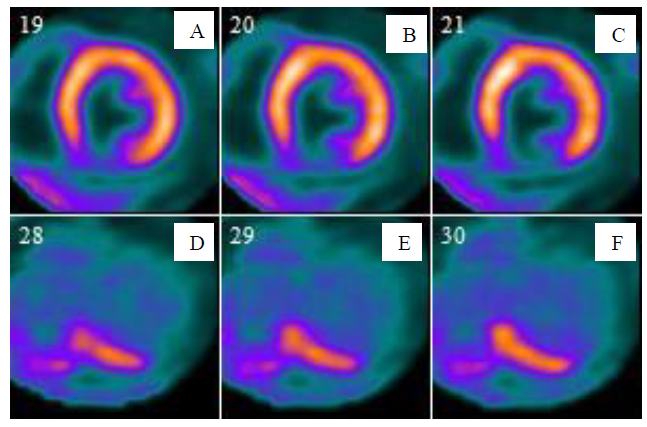 Hibernating myocardium is an important cause of reversible left ventricle dysfunction. Identification of this cohort of patients becomes essential to ensure proper treatment. PET CT has been commonly used modality to identify viable but hibernating myocardium to ensure timely management of these patients to improve their quality of life. Better soft tissue resolution of MRI, superior myocardial scar detection of late gadolinium sequences are well studied. Cardiac MRI is also considered as the gold standard for functional assessment. Though widely not used Cardiac MRI with its multiparametric approach enables us in the confident detection of viable myocardium excluding the myocardial scar component. Cardiac MRI can also be used to accurately prognosticate the patients who will really benefit from cardiac revascularisation therapy.

LGE identifies the scar due to accumulation of the gadolinium based contrast agent in the intracellular spaces which can be widened either due to inflammation or fibrosis. So differentiation of infarction enhancement from inflammatory enhancement is necessary. Clinical details, pattern of enhancement-subendocardial to trans-mural, extent of enhancement, localization of enhancement corresponding to the arterial territory suggests an ischemic pathology. Many studies showed there was a strong correlation between the extent of late gadolinium enhancement and the recovery of RWMA at 6 months (P<0.001) and LGE can be used for viability assessment.

Wall thickness is typically measured in the cine sequence in the end diastolic phase where the left ventricle blood pool is maximum. Scar tissue typically leads to volume loss and focal reduction of the thickness in the infarcted segment. RWMA can be assessed subjectively on both CINE and tagging sequence. Tagging grading is semi-objective with good reproducibility and intra-observer variability. Varied manifestations of wall motion abnormalities can be expected in hibernating myocardium from akinesia to mild hypokinesia.