Background: Hypertrophic cardiomyopathy (HCM) is defined by the presence of left ventricular hypertrophy (LVH) in the absence of other potentially causative cardiac, systemic, syndromic, or metabolic diseases [1]. It is the most common genetic abnormality of the myocardium, with an anaesthetized prevalence ranging from 1:500 to as high as 1:200 [2-4]. It is the primary cause of sudden cardiac death (SCD) among teenagers and athletes.

Patient: A 56-year-old man presented with chest tightness and palpitations which had been occurring post-activity for the previous 6 months. The patient was advised to be admitted. He underwent echocardiography, cardiac magnetic resonance (CMR), coronary angiography (CAG) examination, and left ventriculography. He was diagnosed with hypertrophic obstructive cardiomyopathy (HOCM) with systolic anterior motion (SAM) phenomenon.

Results: Echocardiography results showed that the interventricular septal thickness was 14-16 mm and that there were 2 degrees of SAM of the mitral valve. This resulted in severe stenosis of the left ventricular outflow tract (LVOT) and moderate to severe mitral insufficiency. Left ventriculography confirmed mitral regurgitation (MR) associated with HOCM with SAM phenomenon. Under the protection of a permanent pacemaker, the patient was treated with alcohol septal ablation (ASA). After discharge, the symptoms of chest tightness and palpitation did not recur.

Conclusion: Beneficial effects were observed when patients with HOCM and SAM were treated with ASA under the condition of a permanent pacemaker.

Hypertrophic cardiomyopathy (HCM) is mainly an autosomal dominant inherited heart disease. In adolescents and adults, 40%~60% of HCM is caused by gene mutations encoding myocardial sarcomere proteins, 5%~10% is caused by other gene mutations or nongenetic diseases, and 25%~30% cases of HCM have unknown causes [5,6]. Clinical diagnosis of HCM is made by imaging with two-dimensional echocardiography. The most important haemodynamic consequence of this condition is left ventricular outflow tract (LVOT) obstruction (LVOTO), in which 70% of patients develop a dynamic LV outflow gradient of 30 mmHg or greater [7]. LVOTO is typically associated with HCM and is the third most frequent cause of unexplained hypotension [8]. In addition, there are many wide clinical manifestations, such as chest pain, chest tightness, anhelation, palpitation, syncope, and sudden cardiac death (SCD).

On July 7, 2022, a 56-year-old man presented with chest tightness and palpitations which had been occurring post-activity for the previous 6 months. The patient suffered from slight chest tightness and palpitation, which was a paroxysmal dull pain that was located in the lower section of the sternum and lasted from more than a couple of minutes to one hour with connection to physical activity. The symptoms were accompanied by chest pain and shortness of breath, but not by dizziness, syncope or haemoptysis. He had not received treatment. The patient had smoked five cigarettes a day for 20 years. He denied the use of any alcohol and did not have any known chronic diseases (such as coronary heart disease (CHD), hypertension, diabetes, etc.). There were no similar diseases or any other genetic history of disease in his family. The patient’s vital signs were normal upon admission. On physical examination, the patient’s body temperature was 36.5°C, pulse rate was 74 beats/min, respiratory rate was 18 breaths/min, blood pressure was 126/88 mmHg, weight was 66 kg, and height was 1.68 metres. The patient had a clear mind, upright posture, no cyanosis of lips, no dilation of jugular veins, and there was no negative sign of hepatic jugular venous reflux. The respiratory sounds of both lungs were clear, and there were no dry or wet rales. The cardiac boundary was normal, with a heart rate of 74 beats/min. The heart rhythm was uniform, and there was a systolic ejection murmur in the fourth intercostal space on the left edge of the sternum. The abdomen was flat and soft, without tenderness and rebound pain, and the bowel sound was normal. There was no oedema in either of the lower limbs. Auxiliary examination results showed no detectable changes in myocardial enzymes, myoglobin, serum troponin T, blood routine, coagulation function, liver and kidney function, serum glucose, electrolytes, blood lipids, N-terminal pro-B-type natriuretic peptide (NT-proBNP) or chest X-ray. The patient refused genetic testing for HCM. Electrocardiographic recordings during sinus rhythm showed an ST change, ST segment depression and T-wave inversion in leads V2 to V6. Dynamic electrocardiogram (DCG) showed the same results as electrocardiography (ECG), except for occasional atrial premature contraction and ventricular premature contraction. Transthoracic echocardiography (TTE) revealed the following (Figures 1A and 1B): 1. Significant hypertrophy (16 mm) and protrusion (15 mm) of the basal segment of the ventricular septum + II° systolic anterior motion (SAM) of the mitral valve resulted in severe obstruction of the LVOT (the narrowest inner diameter was 7 mm, peak gradient of LVOT 105 mmHg, average gradient of LVOT 44 mmHg) and moderate to severe mitral regurgitation (MR) (max regurgitating velocity 7.3 m/second, max regurgitating gradient 213 mmHg, instantaneous backflow 57 ml). 2. The echo light spots of the ventricular septum and left ventricular (LV) myocardium were slightly thickened and enhanced. (HCM?) 3. Mild aortic valve regurgitation was observed. 4. The LV diastolic function was poor (FS: 38%), and there were no obvious abnormalities in the LV overall contractile function (EF: 68%). 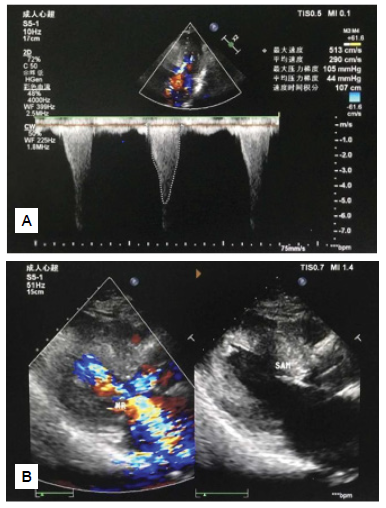 The patient was diagnosed with the following: 1. Hypertrophic Obstructive Cardiomyopathy (HOCM)? 2. Coronary Heart Disease (CHD)? Cardiac magnetic resonance (CMR) showed significant hypertrophy of the ventricular septum wall of the LV, with the thickest location being approximately 14 mm (Se17 Img 25), and II° SAM of the mitral valve. Myocardial blood flow perfusion was without defect. Myocardial enhancement was delayed. CMR indicated the diagnosis of HOCM. Coronary angiography (CAG) showed that some plaques were observed in the left anterior descending (LAD) artery with 30% stenosis. There was a TIMI flow of grade 3. No plaques or occlusion were observed in the left trunk, left circumflex artery (LCX) or right coronary artery. The blood stream was unobstructed. The left ventricular septal branch was not observed providing collateral blood supply to other areas of the myocardium. Left ventriculography showed that the interventricular septum under the mitral valve and the middle part of the interventricular septum were significantly hypertrophied. The guide conduit was sent to the left coronal opening. The guide wire passed through the first septal branch to the distal end, and then the first septal branch was blocked by balloon test. At the same time, the MR decreased from 50 ml to 15 ml. This confirmed that the MR was related to the SAM phenomenon in HOCM.

At approximately the 2-month outpatient follow-up, the patient stated that he took the medicine regularly.

The patient refused genetic testing for HCM. The most important limitation of this study is its lack of long-term follow-up, and the subsequent inability to assess the patient's prognosis.

Funding information is not applicable.

The authors declare that they do not have any conflicts of interest.

Written informed consent was obtained from the patient.

The work was approved by all the authors.

The work has been approved for publication by all the authors.

Some or all data and material generated or used during the study are available in a repository or online (provide full citations that include URLs or DOI).

Some or all code generated or used during the study are available in a repository or online (provide full citations that include URLs or DOI).