Is Qtc Interval Associated With Insulin Resistance in Metabolic Syndrome?

Background/Aims: Prolonged corrected QT interval (QTc) is related to ventricular malignant arrhythmia and increases the risk of sudden cardiac death. This study assesses the association between cardio metabolic abnormalities and length of the QTc interval in the Province of Vojvodina, a region with the highest prevalence of obesity in Serbia.

Numerous epidemiological and clinical trials have shown that increased amount of body fat, particularly intra-abdominal fat is associated with a number of metabolic complications. Enlarge extent of adipose tissue and imbalance in adipocytokines secretion have a significant role in MetSy development [1].

Metabolic syndrome (MSy) is a group of risk factors that are associated with cardiovascular diseases and type 2 diabetes [2]. Increase amount of intra-abdominal fat, insulin resistance, dyslipidemia, hypertension, and the presence and protrombotic-proinflamatory state are key factors in metabolic syndrome [3-6]. It is estimated that approximately 20-25% of the world's adult population have metabolic syndrome; mortality of these people is double, and the morbidity of heart attack or stroke is three times higher than in the healthy population [7].

Studies conducted by Faramawi et al. and Soydinc et al. have shown that the metabolic syndrome is independently associated with the length of the corrected QT interval [15,16]. Prolonged QTc interval can be related to some components of the insulin resistance [17-19]. Except usual risk factors, some unclear mechanisms cause increased cardiovascular risk in Patients with type 2 diabetes mellitus [20]. A prolonged QTc interval might be a significant additional factor [21]. Prolonged QTc interval in diabetes can be caused by a dysfunction of the autonomic nervous system that causes a higher incidence of cardiac arrhythmias [22-20].

The study aim is to evaluate which metabolic parameter play the most important role in the prolongation the of the QTc interval in the Province of Vojvodina, a region with the highest number of obese people in Serbia.

Retrospective cohort study was carried out in the Department of Endocrinology, Diabetes and Metabolic Disorders, Clinical Centre of Vojvodina, Novi Sad. We included obese patients with body mass index (BMI) ≥ 30 kg/m2. Patients were 18 to 50 years old. Anthropometric measurements (body weight, body height and waist circumference), body fat mass estimation and cardiovascular risk factor assessment (systolic and diastolic pressure, fasting serum lipids, glucose and insulin levels) were done. Metabolic syndrome was diagnosed according to the Adult Treatment Panel III criteria. We excluded patients with any serious illness previously diagnosed or treated (arterial hypertension, diabetes mellitus, heart, hepatic, kidney, psychiatric, malignant or infectious disorders, electrolyte imbalance and those patients taking drugs that can influence QT interval. Inclusion and exclusion criteria for the study group are showen in the flow chart (Figure 1). The control group involved healthy, nonobese subjects with BMI < 30 kg/m2. The groups were age and gender matched. The study was performed according to the Declaration of Helsinki, and informed consent was obtained from all participants.

Participants wearing light indoor clothes and no shoes were measured body weight (BW) and body height (BH) using calibrated beam-type balance to the nearest 0.1 kg and Harpenden anthropometer to the nearest 0.1 cm respectively, body mass index (BMI) was calculated (BMI= BW/BH2 (kg/m2)). Waist circumference was measured using a flexible tape to the nearest 0.1 cm at the level midway between the lowest point on the rib margin and the highest point on the iliac crest. Systolic (SBP) and diastolic (DBP) blood pressure was measured using a sphygmomanometer by Riva-Rocci, in sitting position after 10-15 minute rest period. Total cholesterol and triglycerides were established using the commercial kit Boehringer Manheim GmbH. HDL-cholesterol was evaluated using the method of precipitation with Na-phosphor-tungstate, while LDL-cholesterol was calculated using Friedewald formula. Fasting plasma glucose was measured using Dialab glucose GOD-PAP method. Insulin was assayed via immunoradiometric assays. All patients underwent a 75g oral glucose tolerance test (OGTT), during which fasting and stimulated levels of glucose and insulin were measured at 0' and 120'. The HOMA-IR index (Fasting glucose (mmol/l) x Fasting insulin (μUI/ml)/22.5) was used for estimating insulin sensitivity. All blood samples were taken after an overnight 12-h fast. Body fat mass was assessed with the bioelectrical impedance method using a Tanita TBF-310 Body Composition Analyzer (Tanita Corporation, Tokyo, Japan). In order to ensure accuracy of measurement, subjects were told not to eat or drink within 4 hours of the test, not to exercise within 12 hours prior the test, to urinate 30 minutes before the test and not to drink alcohol within 48 hours.

All of the subjects in the study population done a standard resting 12-lead surface ECG record at a paper speed of 25 mm/s and a gain of 10 mm/mV. The ECGs were analyzed by one reader who was unaware of the characteristics of the subject. The reader was trained to obtain the minimum of intravariability of measurements. The ECG intervals were calculated manually with graduated lens. QT intervals were measured from the beginning of the QRS complex to the visual return of the T-wave to the isoelectric line. QT intervals and R-R intervals were measured in all of 12 derivations in three consecutive cardiac cycles and then averaged . All QT intervals were corrected using the Bazett formula = QT Interval / √ (RR interval).

Statistical analyses were performed using the SPSS (version 11.0) software. All variables were expressed as mean ± standard deviation or percentage (%). We used the Mann?Whitney test for nonparametric unpaired variables when comparing the 2 groups, and the Student’s t test for parametric variables, p value of 0.05 or less was considered to indicate statistical significance. The analysis of correlations was obtained by Pearson correlation coefficients.

The study included 80 patients who were divided into two groups: the study group patients - patients with metabolic syndrome (n = 50) and a control group - normal weight subjects without metabolic syndrome (n = 30). The characteristics of the study population are listed in Table 1. Body weight, BMI, waist circumference, total fat mass, systolic blood pressure were significantly higher (p<0.01), whereas HDL level was significantly lower (p< 0.01) in subjects with MSy than those without Msy. 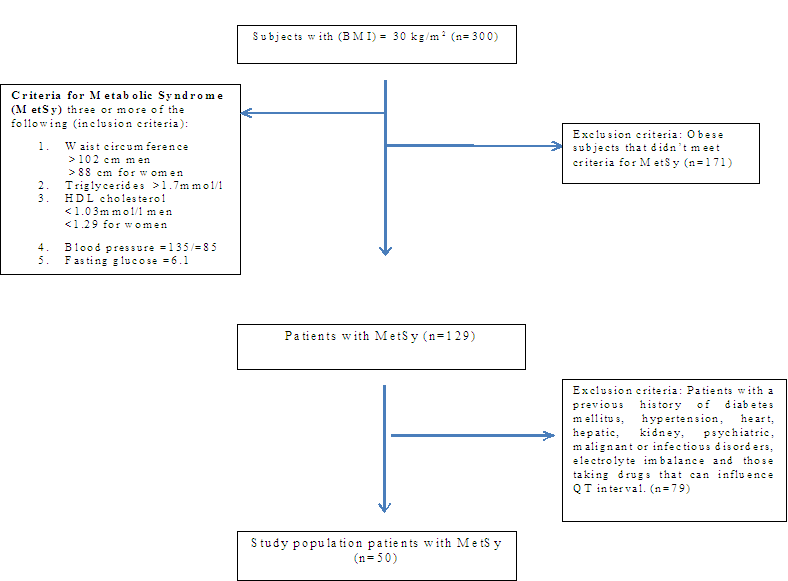 Figure 1: Flow chart of patients who met inclusion/exclusion criteria for the study population 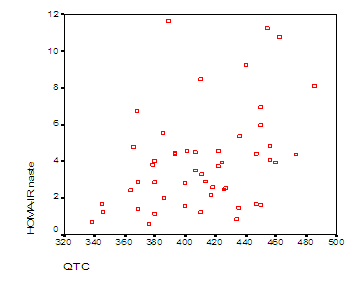 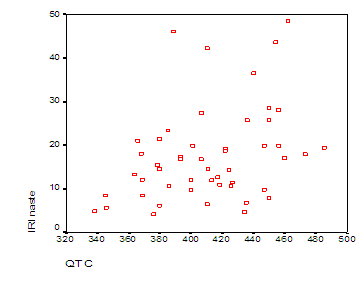 In fact, the authors found inverse correlation between adiponectin levels and QTc duration [8]. Montague et al. showed that visceral adiposity has been shown to be an important predictor of increased cardiovascular, metabolic complications and mortality [25]. Peiris et al. came to conclusion that abdominal fat distribution is an independent risk factor for QT prolongation [26].

In our study, although the length of the QTc interval in patients with metabolic syndrome had significantly higher values, the absolute mean values were not abnormal in this study. However, studies have shown that the QTc interval prolongation even within the normal range is associated with adverse cardiovascular events [22,27-29]. Prolonged QTc interval predisposes patients with MetSy to develop malignant ventricular arrhythmia and adverse cardiovascular outcomes.

We found a positive correlation between the level of insulin resistance and hyperinsulinism with the QTc interval length. The increased amount of body fat, a greater amount of intraabdominal adipose tissue is closely associated with the development of insulin resistance in patients with metabolic syndrome. Insulin resistance plays the main pathophysiological role in the metabolic syndrome development. Van et al. illustrated that hyperinsulinemia prolongs QT interval even in healthy subjects [30]. High insulin levels are associated with increases in sympathetic nerve activity, which in turn enhances myocardial cell membrane refractoriness and thus prolongs the QTc interval [31,32]. Insulin can also cause hypokalemia, which often results in a prolongation of QTc interval [33].

Pop et al, Lo et al. and Stettler et al. pointed out that abnormal values of QTc interval show dysfunction of sympathetic and parasympathetic nervous systems which is a predictor of decreased survival and increased deaths from ventricular arrhythmias in patients with diabetes [34-36]. QTc interval prolongation represents an independent risk factor for the development of malignant arrhythmias and sudden cardiac death [37]. Insulin resistance may affect the membrane of cardiomyocytes and thus to prolong the QTc interval. Hyperglycemia in endothelial dysfunction and oxidative stress can potentially alter cardiac repolarization [38,39]. In addition, autonomic neuropathy, which is common in diabetes is a result of glucose metabolism and may lead to disorders sympathovagal balance and increased cardiac sympathetic activity [28].

Regardless of the mechanism of QTc interval prolongation, it represents a clinically important predictor of cardiovascular risk in the assessment of early cardiac death. Therefore, we should pay particular attention to the ECG and QTc interval length in patients with metabolic syndrome because most sudden cardiac deaths are a consequence of impaired ventricular repolarization [44,45].

In conclusion, this study demonstrated that prolongation of the QTc interval is associated with insulin resistance in patients with Metabolic syndrome in the Province of Vojvodina. From this study, we see the need for further research on the links between the insulin resistance and sudden cardiac death. It requires long-term follow-up studies of these patients in evaluating the risk of malignant cardiac arrhythmias.