Methylene Blue to the Rescue in Accidental Treprostinil Overdose

The incidence of pulmonary hypertension (PH) has been rising enormously over the past few years, with more systemic diseases being found to be associated with it. A better understanding of the pathophysiology of PH has led to the development of more effective therapies that have impacted the survival and morbidity of these patients. However, the adverse effects associated with these medical therapies are often serious and not trivial. Here we present a case of an inadvertent overdose of oral treprostinil diolamine that led to refractory vasoplegic shock.

A 63-year-old female with a medical history of severe pulmonary arterial hypertension well controlled on Riociguat and oral Treprostinil, obstructive sleep apnea, hypertension, and hyperlipidemia presented to an outside hospital with nausea and vomiting. Her PH medications were discontinued due to nausea. She developed acute respiratory failure while going upper endoscopy and could not be extubated afterward. A trans-thoracic echocardiogram (TTE) showed new onset severely depressed left ventricular ejection fraction of 10-15% with global hypokinesis compared to normal left ventricular function at the time of admission to the outside facility. Right heart catheterization after stopping PH therapy at the outside facility showed the following findings:

Post nitric oxide challenge test PA pressure dropped to 38/24 with a mean of 30 mmHg. There was no change in CO/CI. PVR decreased to 2.85Woods units. Measurements were done at the ventilator setting of Tidal Volume - 450ml, Positive end-expiratory pressure (PEEP) of 10mmHg, and 100% FiO2. Oxygen saturation was noted to be the following: R PA - 63.3%. RA - 58.7%. RV - 57.7%. These values were extremely concerning for rebound pulmonary hypertension after abrupt cessation of PH therapies.

The patient was then transferred to our facility for further care. On arrival to our facility, she was improving on diuretics and inotropic support with mechanical ventilation, and a decision was made to resume her PH medications gradually through the feeding-tube. She was given a full dose of 6 mg of extended-release treprostinil diolamine crushed through her naso-gastric feeding tube which immediately lead to profound hypotension requiring escalating doses of multiple vasopressors including dopamine, epinephrine, norepinephrine, and vasopressin. She continued to be hypotensive despite maximal doses of vasopressors. Her extremities were flushed and warm with pulmonary arterial diastolic pressure (a surrogate of wedge pressure) being < 15mmHg. This suggested vasodilatory shock. We then decided to use methylene blue in an attempt to reverse the refractory vasoplegia. 100mg of methylene blue was given intravenously, which resulted in rapid improvement of her blood pressure, and she was weaned off all the vasopressors subsequently in the next hour. A repeat TTE showed LVEF 25-30% with severe global hypokinesis with focal akinesis of mid to distal anterior, anterolateral septum, and mid inferolateral and inferior segments.

A Repeat RHC on no PH Therapy Showed the Following Numbers:

A follow up cardiac MRI in the next two days showed more improvement of her LVEF to 43% and no abnormal delayed contrast-enhancement to suggest prior infarct or infiltrative disease, and a diagnosis of stress-induced cardiomyopathy was made. She was placed on inhaled epoprostenol for a brief period and her PH medications were restarted gradually when she was able to take oral medications, titrated up slowly and they were well tolerated this time. The patient was discharged home safely the subsequent week. The patient followed up in our clinic in a month and was doing very well clinically. Repeat echocardiogram revealed normal LV function and remarkable improvement in previously noted wall motion abnormalities. 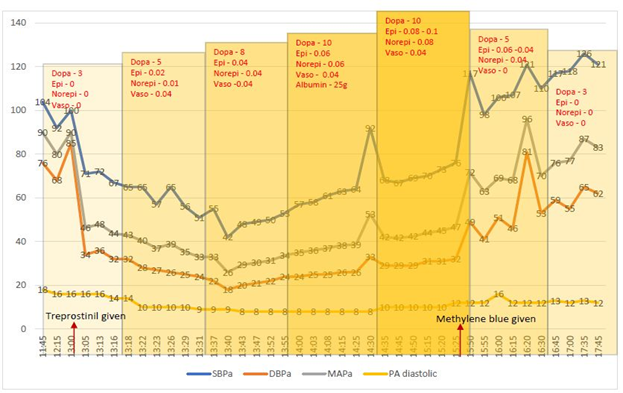 The treatment of pulmonary arterial hypertension [1] has come a long way in the past decade, with more than ten different therapies available now [2,3]. Of all the available therapies, prostacyclin-based therapies mainly epoprostenol is the one that has been studied the most and has proven mortality benefit as de novo therapy [4]. However, this drug is available only in a parenteral formulation, which makes it a last resort in the treatment of PAH. More recently, the discovery of oral prostacyclin analog, treprostinil diolamine, has made a paradigm shift in the treatment of PAH.

The vasodilatory effect of prostanoids is mediated via cyclic AMP stimulation by the IP receptors [5]. They also decrease platelet aggregation and improve smooth muscle relaxation via cyclic AMP. Patients with PAH tend to have reduced activity of prostaglandin synthase enzyme and, as a result, reduced prostacyclin levels. The synthetic prostanoids help overcome this critical deficiency. Treprostinil and Iloprost are also known to be pulmonary venodilators via DP1 receptors [6]. However, until recently, all the synthetic prostanoids were available only in parenteral formulations due to their short half-lives and are associated with complications during continuous infusion. This led to the development of oral prostacyclin analog, treprostinil diolamine. Although not very efficacious as add-on therapy with background ERA and PDE5i, as noted in the FREEDOM C trial [7], it has been shown to be a good first-line agent in de novo PAH therapy for improvement in 6MWD [8]. It is available as an extended-release formulation with a half-life of about 4 hours and sustained plasma concentration up to 8-10 hours [9]. As such, the drug is usually dosed twice daily or three times daily regimens [10]. It is recommended to be taken with food and not to be crushed or chewed. The drug is predominantly metabolized in the liver. The major side effects associated with oral treprostinil are headache, flushing, jaw pain, edema, nausea, extremity pain, and rarely systemic hypotension [11]. It is often very challenging to determine if the hypotension is due to worsening pulmonary hypertension or a side-effect of the medication itself. Management of hypotension is usually conservative by increasing intravascular volume, decreasing the drug dosage, and avoiding bolus doses.

When administered as a bolus, treprostinil may lead to severe systemic hypotension needing vasopressors. So far, there have been 3 cases noted in the literature of inadvertent treprostinil overdose, all due to parenteral formulations. The first case is that of a 10-year old girl who received an accidental bolus of intravenous treprostinil by her caregiver [12]. She was reported to have severe nausea, vomiting, arm tingling, and hypotension managed conservatively with good clinical recovery. The second case is that of a 58-year old female who received a subcutaneous bolus of treprostinil due to a mishap in pump programming [13]. She was found to have tachyarrhythmias and severe hypotension managed with amiodarone and vasopressors with good recovery in 48 hours. The third case was reported in 2018 [14] about a 29-year-old woman who inadvertently received a subcutaneous injection of treprostinil rather than infusion that led to immediate circulatory collapse. She was resuscitated with vasopressors and intravenous fluids as well as with ondansetron and loperamide for gastrointestinal disturbances.

To our knowledge, this is the first case of treprostinil overdose with the oral formulation and the first case to be treated with methylene blue for vasoplegic shock. The treprostinil capsule was unknowingly crushed in order to be administered via the naso-gastric feeding tube. This led to a catastrophic circulatory collapse with hypotension and vasoplegia, as evidenced by a low systemic vascular resistance within minutes of medication administration. The patient required escalating doses of epinephrine and dopamine with no improvement in hemodynamics. A decision was made to use methylene blue as a rescue agent due to its nitric oxide scavenger effect. Methylene blue has good evidence for reversing vasoplegic shock after cardio-pulmonary bypass [15], and it is an all-time favorite drug for surgeons [16]. Methylene is believed to compete with nitric oxide in binding to soluble guanylyl cyclase enzyme, which in turn counteracts the nitric oxide-mediated endothelial vasodilation [17]. Thus, methylene blue is a potent vasoconstrictor in refractory vasoplegic shock [18]. The most important side-effect of methylene blue is profound vasoconstriction, which can manifest as angina, tachyarrhythmias, reduced cardiac output, and increase in pulmonary pressures and pulmonary vascular resistance resulting in impairment of gas exchange. However, these effects are dose-dependent and do not occur with doses < 2mg/kg [19]. It can also precipitate a hemolytic crisis in G6PD deficiency. Therefore, methylene blue needs to be used with caution and only in refractory cases. In our patient, we were faced with a challenging clinical situation and limited treatment options due to refractory vasoplegia, and hence, we had to use methylene blue for rescue, which proved to be the savior for the patient.

The other learning point from this case is that pulmonary vasodilator medications need to be resumed at lower doses and titrated slowly to reach target dose especially when they have been held for more than 24 hours [20] . It is also important to be aware of rebound pulmonary hypertension and acute right ventricular failure when these medications are abruptly stopped without parenteral or inhaled substitutions [21]. This could lead to catastrophic right ventricular cardiogenic shock which is usually refractory to medical therapy. Pulmonary arterial hypertension is indeed one of the most challenging conditions to manage in critically ill patients [22].

The most dangerous adverse effect of treprostinil is vasoplegic shock, which could be managed with vasopressors, but in refractory cases, methylene blue can be safely used to reverse the refractory vasoplegia. Extreme caution should be exercised in administering treprostinil therapy. Caregivers should be well educated and aware of the potential consequences and be ready to tackle the same. The use of methylene blue for reversal should be considered on a case-by-case basis.