A previously healthy 33 year-old male was admitted to the Emergency department (ED) with two days of dyspnea upon exertion, orthopnea and paroxysmal nocturnal dyspnea. Past medical history revealed that the patient had been body building using resistance training for the past three months.  Two days prior to presentation to the ED he took three pills of Clenbuterol 40 mcg to enhance his athletic performance.  The patient denied using tobacco, or consuming steroids or any other medications including illicit drugs or prior use of clenbuterol. He did not have a history of cardiovascular risk factors such as hypertension, hypercholesterolemia or diabetes mellitus, and did not have a family history of cardiovascular disease.

Physical examination showed a heart rate of 60 beats/min and BP 123/70. Elevated jugular venous pressure was noted, however the rest of the physical examination was unremarkable. The electrocardiogram (ECG) showed sinus rhythm with inverted T waves in lead III and AVF (Figure 1). (The third beat is pre-excited.  Subsequent recordings showed a clear WPW pattern and the patient had an ablation at a later time).  Blood tests revealed troponin of 0.433 ng/ml (normal <0.04). Creatine kinase was 428 U/L (normal <308). C reactive protein was 4.1 mg% (normal <0.5), and the rest of the blood tests were normal. The differential diagnosis included myocarditis and acute coronary syndrome.  The patient was admitted to the intensive cardiac care unit for monitoring and was treated for presumed acute coronary syndrome with aspirin, clopidogrel and enoxaparin.

An echocardiogram showed normal systolic function of both ventricles with a small area of hypokinesis in the inferior wall. A day after the patient was hospitalized he underwent coronary angiography which showed normal coronary arteries. Left ventricle end diastolic pressure was mildly elevated 20 mmHg (normal <12 mmHg).

During his hospitalization dyspnea improved and troponin levels returned to normal. The patient was discharged home after two days in good condition. The patient was seen in an outpatient clinic several weeks following this episode where he had no complaints and felt good. ECG was normal with normalization of T waves and repeat echocardiogram showed normal systolic function of both ventricles. 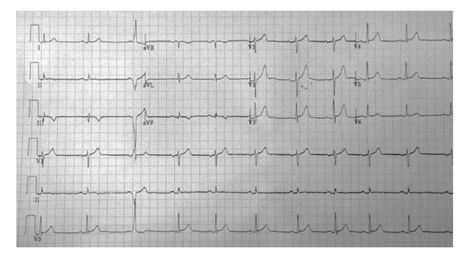 Clenbuterol hydrochloride is an orally-administered β2 sympathomimetic with an oral bioavailability of 70-80% and a long half-life of 25-39 hours [1]. While it has been a common treatment for bronchial asthma in the past, currently it is rarely used for this indication, due to its side effects, including tachycardia and tremor. In addition to its well-known bronchodilator and positive inotropic effects, clenbuterol possess well studied anabolic effects that have been studied in both animal and humans [2]. The anabolic effects of Clenbuterol have been used in the meat industry to increase meat mass, and consequently, a few cases of clenbuterol poisoning in humans following consumption of contaminated meat have been reported [3,4].

Due to the effect on skeletal muscle, long term beta agonists have been suggested as a possible therapy for muscle wasting in conditions such as cancer, HIV and other conditions that cause cachexia [5].

Such effects have brought clenbuterol to the attention of body builders and the use of this remnants of this drug have been shown in 4% of college students that participated in a study [6]. Currently, clenbuterol can be easily purchased in multiple websites over the internet.

As the abuse of clenbuterol has grown, additional side effects have been reported including palpitations, chest pain, tremor, tachycardia, tachypnea, wide pulse pressure, abdominal distention,   hypokalemia and hyperglycemia [7,8]. Several cases have been reported of patients who had cardiovascular adverse events after taking clenbuterol in combination with anabolic steroids, heroin, liothyronine sodium, intramuscular testosterone or other drugs [8-12].  However, due to the use of various agents in combination with clenbuterol, the cardiovascular effects of the latter could not be differentiated from those of the other drugs of abuse. In Pubmed search, we found only eight cases of myocardial injury among patients who used clenbuterol alone [13-19].

These nine cases (including our case) are characterized by myocardial injury following the sole use of clenbuterol. These cases vary from each other in clenbuterol dose, duration of exposure, and the extent and territory of myocardial damage.

A summary of the reported cases is shown in Table 1. 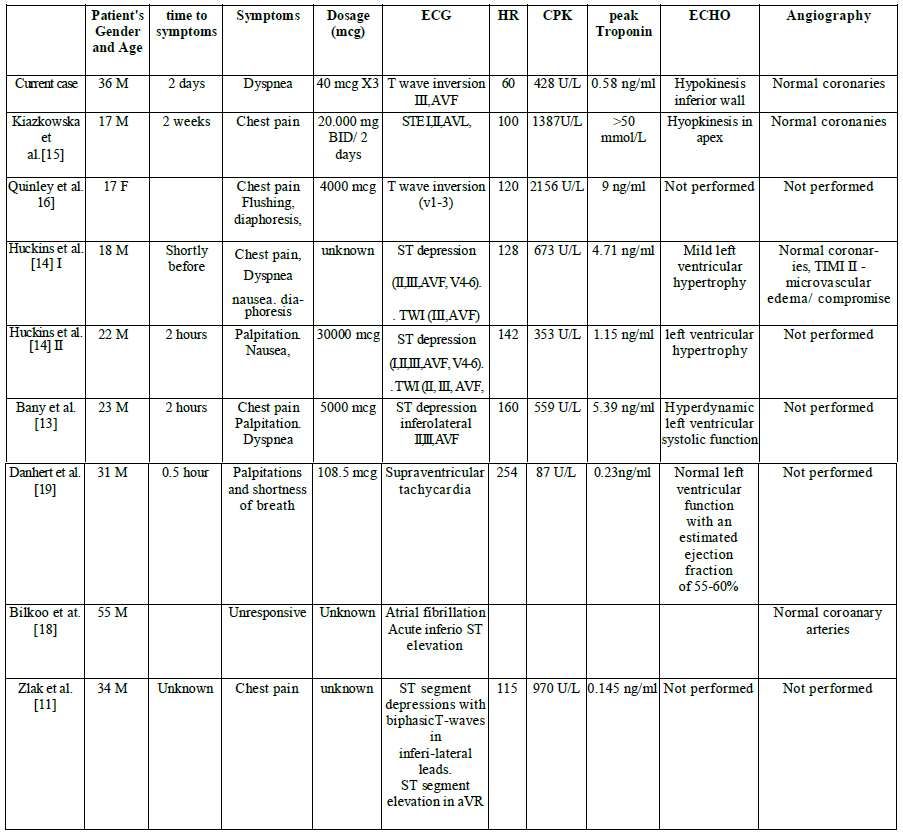 Most of the patients with clenbuterol-induced myocardial injury were young males, a finding consistent with the typical population of bodybuilders. The symptoms of developed shortly after the ingestion of the drug and Clenbuterol dosage varied greatly among the patients described. This may be explained by inaccuracy in reporting by the patients, but can also be due to a variability in drug amount in different product and impurities due to lack of standardization of product processes.  The presenting symptoms of clenbuterol- induced myocardial injury included chest pain, dyspnea and palpitations.

Four of the seven patients, including ours, underwent coronary angiography which showed patent coronary arteries in all patients. In a single patient, findings compatible with microvascular injury were observed. No obstructing lesion in a major coronary artery was observed.

We focused on cases where the patients did not use any other drug, including anabolic steroids or recreational drugs. Myocardial injury following clenbuterol ingestion, as demonstrated by elevated troponin levels, ECG changes and echocardiographic findings has been rarely described. All of the nine cases presented had elevated troponin levels. To our knowledge this is the first review of the published cases.

The mechanisms underlying clenbuterol associated myocardial injury are not known, and several mechanisms have been suggested. Kierzwoska et al. [15] hypothesized that the focal ECG changes and wall motion abnormalities seen on echocardiogram represent regional vasospasm. This has been questioned by Huckins [14] since, based on their pharmacological effect, β2 agonists would be expected to cause coronary vasodilation. Huckins suggested that clenbuterol causes hypertrophy of the heart and the increased oxygen demand that result in myocardial ischemia, consistent with type II myocardial injury. While animal studies showed that rats treated with clenbuterol had elevated left ventricular mass compared to the control group [20] , the time course of symptoms, appearing shortly after ingestion, does not appear consistent with such a mechanism.

In addition, Huckins  suggested that the prolonged half-life of clenbuterol (25-39 hours), causes pathological tachycardia. As seen in the reported cases, most patients had tachycardia on admission. Some of them had extreme tachycardia which may explain the elevated troponin, yet many patients were only slightly tachycardic and in our patient heart rate was normal.

Burrinston et al. [21]  explored the myotoxic effects of clenbuterol injected subcutaneously. Rats were treated with a single shot of clenbuterol. The amount of necrosis in the muscle was measured using an anti-myosin monoclonal antibody that enters the endoplasmic reticulum only in cells that have undergone necrosis. The amount of necrosis in the heart was positively correlated with the amount of clenbuterol that was injected. Necrosis was seen at 4 hours post administration and peaked at 15 hours. This finding can explain the cardiomyocyte damage seen after a single ingestion of clenbuterol.   Necrosis decreased by 91-100% in rats pre-treated with bisoprolol, β2 blockade or noradrenaline depletion. This finding is consistent with direct myotoxic effect of clenbuterol. Peak cardiomyocyte necrosis was noted 2.4 mm from the apex. This finding is consistent with the high incidence of ECG and echocardiographic changes in the in the inferior and lateral wall in the patients presented. Direct myocardial injury due to catecholamine activation has been well described and attributed to supply/demand imbalance induced by the sustained activation of adrenergic receptors and mitochondrial dysfunction [22].

In summary, we reviewed nine cases of myocardial injury following exposure to the long acting beta2 agonist clenbuterol. The incidence of this injury is not known, and under reporting is probable. However, the small number of reported cases suggests that differences in individual sensitivity to beta 2 agonists may contribute to differences in subjects' susceptibility to cardiac toxicity of clenbuterol.  Indeed, genetic variability in Beta2 Adrenergic Receptor has been reporting, affecting in vivo response to agonists in healthy subjects [23]. Although the mechanisms causing clenbuterol myocardial injury are not clear, based on clenbuterol pharmacological properties and its long half-life, contributing mechanisms suggested include, prolonged tachycardia, increased myocardial oxygen demand, as well as direct toxicity to myocytes.

Awareness to the possibility of clenbuterol myocardial toxicity in young athletes admitted due to shortness of breath and chest pain, is essential to the prompt diagnosis and treatment of this condition.