Stent fracture came into recognition with the advent of the DES [1]. It has been suggested that a greater neointimal proliferation in the BMS reduces the risk of fracture [2, 3] or /and less radio opacity renders the diagnosis of fracture more difficult [1]. Stent Fracture is more frequently observed after DES implantation. The predictors of stent fracture may be attributed to multiple patient, stent and vessel characteristics. The treatment of stent fracture becomes significant in view of Target Lesion Revascularization instent restenosis and stent occlusions leading to repeat revascularization. Thus making stent fracture an important complication in percutaneous coronary intervention.

A 63 year old male with history of hypertension and diabetes mellitus underwent stenting to Left Anterior Descending (LAD) artery twice 6 years and 1 year back with Sirolimus drug eluting stents (DES). The latter DES stent was placed within the edges of the former DES leading to two layers of DES stents in the mid LAD. He presented to the hospital with anterior wall myocardial infarction. Coronary angiography revealed thrombotic instent total occlusion in LAD (Figure 1). The total occlusion was crossed using a 0.014 wire and check shoot showed instent stenosis of mid LAD (Figure 2). The patient lesion assessment was done using Optical coherence Tomography (OCT). OCT showed complete separation of the DES stents with multiple stent fractures at multiple levels in both the overlapping stents (Figures 3, 4, 5, 6). The lesion was predilated with 2.5 × 12 mm balloon (Figures 7, 8), followed by a DES 4 × 40 mm (Figure 9) which covered the proximal and distal edge of the previous stents. The lesion was post dilated using 4.5 × 12 mm balloon (Figure 10) with a good final result (Figure 11). 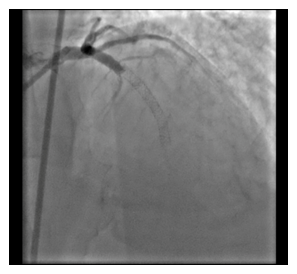 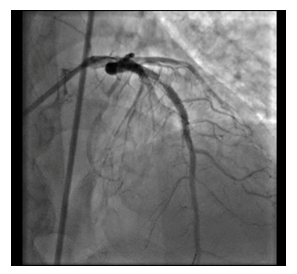 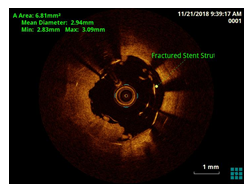 Figure 3: OCT showed complete separation of the DES stents with multiple stent fractures at multiple levels in both the overlapping stents. 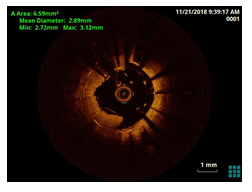 Figure 4: OCT showed complete separation of the DES stents with multiple stent fractures at multiple levels in both the overlapping stents. 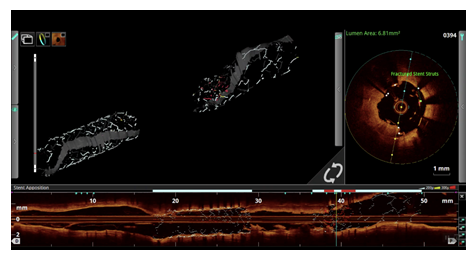 Figure 5: OCT showed complete separation of the DES stents with multiple stent fractures at multiple levels in both the overlapping stents. 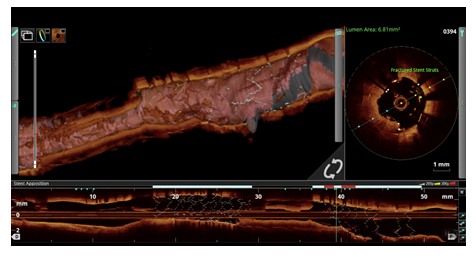 Figure 6: OCT showed complete separation of the DES stents with multiple stent fractures at multiple levels in both the overlapping stents. 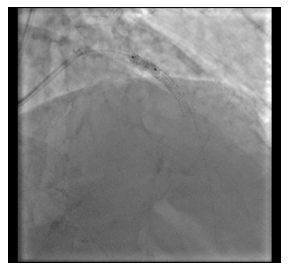 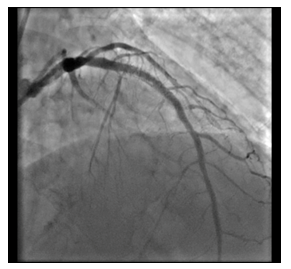 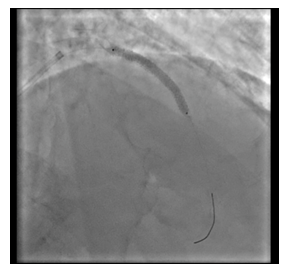 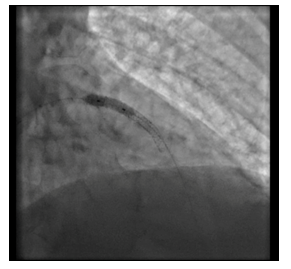 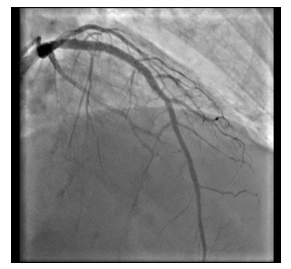 The reported incidence of stent fracture ranges between 0.8 and 19% [4, 5]. Amongst the various types of the DES, the sirolimus Stent (SES) is the main convict [4, 5]. Although there are few investigations reporting equal frequencies of stent fracture in the different types of the DES [6], the majority of the available studies underscore a higher frequency of SF in SES [1, 4, 5]. The interaction between stent and vessel geometry during stent implantation is considered the most important factor in the pathophysiology of SF. Stents change the vessel geometry, thus creating a new vessel angulation. This geometric distortion imposes a considerable mechanical force, increasing metal fatigue and finally the likelihood of stent fracture [1, 7]. Thus, stent flexibility which influences the vessel geometry appears to be directly related to fracture resistance. In DES group, the least flexible device undergoing bench testing for flexibility (Cypher) was the most susceptible to stent fracture [8]. Also, the fact that the SES enjoys relatively high radio opacity is believed to enhance the possibility of fracture diagnosis [5]. There is currently a paucity of data in the existing literature on the rate of stent fracture in the new generation of the DES; nonetheless, the incidence appears to be lower [7, 9].

Apart from stent type some other stent characteristics play role in stent fracture. Longer stents are thought to be more vulnerable to fracture [3, 4]. Radial force is believed to be more pronounced in longer stents, (not) least in the mid-part of the stent, and it increases metal fatigue and consequently the rate of fracture [1, 7]. Overlapping stents by enhancing “axial stiffness” possibly increases the risk of stent fracture [10-12]. A 60% rate of fracture in overlapped stents was observed in one study [5], and elsewhere, higher frequencies of restenosis along with fracture were reported in overlapped stents [13]. Excessive pressure during stent deployment, balloon post- dilation and resultant damage to the stent strut has also been blamed for a rise in the risk of stent fracture [3, 5, 7, 11, 14]. The other procedural predictors are stent and balloon diameter [1, 7, 10, 14], number of the implanted stents [7], residual post-stenting stenosis [7], smaller minimal lumen diameter, and greater acute gain and late loss [7, 15]. Although there have been a few reports showing no specific predilection for the location of stent fracture, the right coronary artery (RCA) appears to be favoured [7, 15, 16].

A few studies showed that the calcification of plaque increases the risk of stent fracture [17]. In addition, ostial [18] and bifurcation lesions [14] are also reported as the predictors of stent fracture.  In respect to patients characteristics Park et al. demonstrated that hypertension and chronic kidney disease were correlated with stent fracture [7].

In our case the treatment strategy was essential. The dilemma hung between GPIIbIIIa inhibitors, Drug eluting balloon (DEB) and Drug eluting stent (DES). The use of Optical coherence Tomography (OCT) was essential to solve this problem and determine the modality of treatment. The use of DES for re stenting the stent fracture segment was an important decision, the foundation of which laid on the use of OCT, thus improving the mortality, morbidity and prognosis of our patient.

Reintervention was associated with a significant reduction of MACE for patients with symptomatic SF induced ISR [19]. The recommendation for reintervention for SF-induced ISR was that new generation DES (cobalt chromium platform) should be selected as the first line option; various studies have [20, 21] reported significant increases in MACE, TLR, ST, and MI after implantation of a Cypher stent for symptomatic SF induced ISR. A few studies have compared the effect of restenting and ballooning with the recurrence of ISR. Given the factor that stent fracture is associated with a higher rate of clinical events and that a stainless stent is 1 of the independent factors of stent fracture, more mechanical durable DES (cobalt chromium platform stent) should replace first generation, stainless platform stents. As stent fracture is more frequently detected in anatomically complex lesions (angulation, tortuosity, hinge motion), better understanding of abnormal distribution of the shear stress [22] before and post-stenting could improvement of stenting techniques and prevent stent fractures. The use of intravascular imaging (OCT) in our case was immensely fruitful as it helped to decide the treatment strategy, reiterating its need in all such cases of complete occlusion with instent restenosis.