Aim: The use of oral anticoagulant drugs in patients with atrial fibrillation and one non-gender related risk factors is challenging. We compared the efficacy and safety of DOACs vs VKAs in low risk patients.

Conclusions: In low risk patients with atrial fibrillation, there is a benefit (although non-significant) with DOACs as compared to VKAs. Other studies are required to directly test this finding.

The CHA2DS2VASc score has become the standard for assessing the risk of stroke in atrial fibrillation (AF) [1]. A score of 0 in males (or 1 in females) defines a very low risk of stroke that advises against the use of anticoagulation. On the other hand, a score of ≥2 in male and ≥3 in female patients defines an expected net clinical benefit in favor of anticoagulation [2]. The decision on whether to treat patients with a CHA2DS2VASc score of 1 in male or 2 in female, i.e. those with one non-gender related risk factor (NGR-RF), is subject to debate [2-8]. In this patient group, observational studies have reported variable rates of ischemic stroke without anticoagulation [6-9], making it difficult to definitely establish a clear benefit of treatment. This uncertainty is reflected by the guidelines [10,11] in which the use of anticoagulants based on an individualized weighting of risk. There are some reports showing that benefits of anticoagulation with vitamin K antagonists (VKAs) in patients with one NGR-RF may not exceed the risks of bleeding [3,7,8,11]. Direct oral anticoagulants (DOACs) have shown a better safety profile as compared to VKAs in registration trials and real-life cohorts. However, the benefit obtained in high-risk populations (CHA2DS2 score of 2 or more) might not translate to low-risk patients [13].

In this cohort of patients with one NGR-RF, we evaluated the rate of stroke major bleeding and death among low stroke risk patients treated with DOACs as compared to well-managed VKA therapy.

We performed a population-based retrospective analysis on linked administrative claims in the Veneto Region, Italy, using the drug prescriptions archive (ATC codes), the regional inpatients register (ICD9-CM coded discharge diagnoses), the database of residents registered in the regional health system, the archive of co-payment exemptions to identify anticoagulation naive patients with non-valvular atrial fibrillation. Detailed identification of naive patients with atrial fibrillation and their characteristics has been previously published [14]. Patient recruitment and follow up extended from July 1, 2013 to December 31, 2017. All patients had at least 3 months of follow up. From this cohort, we extracted the population of male patients with a CHA2DS2VASc score of 1 and female patients with a CHA2DS2VASc of 2. The first prescription of oral anticoagulants (OACs), or index date, identified the date of enrolment in the cohort. We excluded from enrolment individuals with any dispensed prescription of OACs in the 12 months preceding the index date.

Patient exposure to anticoagulation was calculated on an as treated basis. Patients exited the study in the absence of a new prescription by the end of a 60-day period (grace time) from the last identified index medication fill, occurrence of an endpoint or the end of follow up, whichever came first. VKA dosage was calculated using defined daily doses (DDD) counting one DDD per day and distributing all available DDDs to days of follow-up (including the days covered by the last prescription).

Detailed information including drug prescription, relevant comorbidities for risk score calculation (CHA2DS2VASc and HASBED: a modified score that did not include labile INR) were available for all patients in the registry.

Study endpoints were ischemic stroke (IS), death from any cause, and major bleeding including intracranial hemorrhage (ICH), gastrointestinal bleeding, genitourinary bleeding, and bleeding from other sites identified according to ICD-9CM codes. Major bleeding was identified using the Cunningham algorithm for automated database definition of serious bleeding related to oral anticoagulant use [15]. We excluded intracranial hemorrhage associated with a concomitant discharge diagnosis of major trauma and events not leading to hospitalization or those that occurred as a complication of a hospitalization for another problem. To avoid overestimation of events, a 30-day blanking period was set for ischemic stroke; events occurring in the blanking period were excluded from the final analysis [6]. For the other endpoints, we started counting the days at risk from the date of endpoint occurrence.

The study was exempt from institutional review board approval because there was no direct patient involvement and we used pre-existing deidentified data.

Baseline characteristics are presented and compared as appropriate. The rate of events for the assessed endpoints is expressed as number of events per 100 patient-years. A time-to-event analysis was adopted to measure the risk of study endpoints from the initial prescription until the occurrence of ischemic stroke, major bleeding, death, switch to a different anticoagulant drug, discontinuation of the index anticoagulant drug, or the end of follow-up, whichever came first. Cox regression was used to compare event rates between groups with results expressed as hazard ratios (HR) with 95% confidence intervals (CI). Possible predictors of major bleeding and intracranial bleeding were assessed in a Cox multivariate analysis.

Of the 7912 anticoagulation-naive patients with one NGR-RF, 1829 received DOACs and 6083 received VKAs. Baseline characteristics are presented in Table 1.

Table 1: Characteristics of the cohort

* more than 3 prescriptions of antiplatelet or nonsteroidal anti-inflammatory drugs.

There were no major differences between the groups.

Among the CHA2DS2VASc items, age and hypertension were the most represented risk factors. Noteworthy, patients had also a low bleeding risk as assessed by the HASBED score. 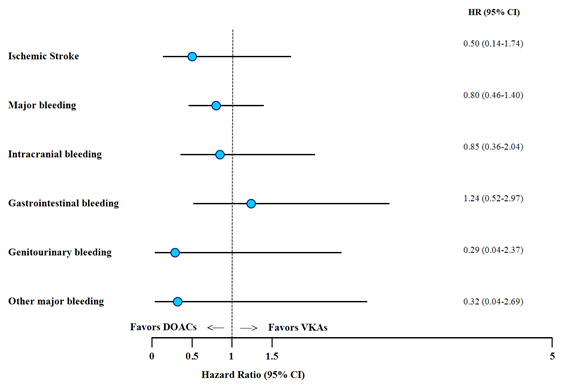 Figure 1: Forest plot showing the effect of DACs vs VKAs on the end points of the study

As shown in Table 2, there were no predictors of major or ICH bleeding among the plausible risk factors (female gender, age > 65 years, hypertension and medications predisposing to bleeding).

Table 3: Causes of death in the DOAC and VKA treated patients.

The question on whether to treat patients with one NGR-RF with oral anticoagulants is still subject to debate [2-8]. Despite uncertainty, we found a large number of patients with one NGR-RF receiving oral anticoagulation. Most patients possibly received anticoagulation in alignment with the European guideline recommendations [16] for the management of AF for patients with 1 NGR-RF (Class IIaB). The present study was prompted by a previous prospective study [7], in which we found a concerning incidence of major bleeding and ICH with warfarin in patients with one NGR-RF. In fact, the introduction of DOACs might have been beneficial in this setting. It has been shown that the absolute advantage of VKA-anticoagulation increases with increasing thromboembolic risk [13]. DOACs have a greater net clinical benefit over VKAs when there is a high risk of both ischemic stroke and intracranial hemorrhage [17]. How much this advantage flattens in low risk patients is not clear. Moreover, at variance with most patients with AF, these are younger with a good renal function which might be a concern for the efficacy of DOACs. In contrast, we found a tendency towards a reduction in ischemic stroke rates with DOACs as compared to VKAs. Although statistical significance was not reached, our findings show that patients treated with DOACs have a 50% reduction in stroke rates. Same is true for safety as the absolute reduction of major bleeding with DOACs was 20% and that of ICH was 15%. These findings are relevant because, despite their extensive use, DOACs have not been specifically tested in randomized trials for efficacy in patients with one NGR-RF.

Despite the overall favorable safety profile of DOACs versus VKAs, we found confirmation that gastrointestinal bleeding is increased (24%) with DOACs even in this younger low-risk population.

Major bleeding is a major concern when treating with anticoagulation in general and particularly in patients at low risk of stroke. Bleeding scores are generally not solid in predicting major bleeding, particularly cerebral bleeding. In this study, possible risk factors for bleeding were tested in multivariate analysis and none of them resulted a significant predictor.

With our data, we cannot answer the question on whether anticoagulation is warranted in these patients; this should be possibly considered in case-by-case basis, using other tools [19,20] and considering other unaccounted risk factors like biomarkers, patterns of atrial fibrillation, and atrial function [20-23]. However, when anticoagulation is deemed necessary, using DOACs instead of VKAs offers some benefit even in patients with one NGR-RF.

Limitations of our study are the retrospective nature of the design and data collection through routine health records without direct patient involvement. On the other hand, strengths of this study are the involvement of a high number of patients and the accuracy of cohort selection and endpoint identification.

In conclusion, whenever anticoagulation is indicated in low-risk patients with atrial fibrillation, DOACs provide an overall noteworthy benefit over VKAs.

All the authors have no conflict of interest to declare