#Both authors share the first author privileges and responsibilities

Objectives and Background: Hemodynamic changes at rest and during exercise in heart failure (HF) after cardiac resynchronization therapy (CRT) are still undefined.

Methods: In 93 HF patients, before and 8 ± 3 months after CRT, we assessed clinical conditions, ECG and standard echocardiography and we performed a maximal cardiopulmonary exercise test with non-invasive measurement of cardiac output (CO) by inert gas rebreathing method.

Cardiac resynchronization therapy (CRT) is nowadays an established treatment for heart failure (HF) [1-6]. CRT was conceived by the observation that an enlargement of QRS is frequent in HF patients, it is often the expression of mechanical dissynchrony of cardiac contraction and it is associated with poor prognosis [7]. The effects of CRT are evident in the acute setting as a reduction of QRS and left ventricular (LV) volumes and as an improvement of LV function. In the chronic setting, CRT is associated with NYHA class reduction [7], LV inverse remodeling, LV ejection fraction increase (EF) [8], and peak oxygen uptake (VO2) increase [9-11], leading to mortality and morbidity improvement [12]. However, the precise hemodynamic mechanism by which CRT improves HF patients’ condition, both at rest and during exercise, is still undefined. This study was conceived to assess whether and how CRT improves HF patients’ hemodynamic patterns at rest and during exercise.

We studied subjects belonging to a cohort of HF patients regularly followed at our HF Units. All patients had been previously familiarized with cardiopulmonary exercise test (CPET). Study inclusion criterion was the presence of the main recognized criteria for CRT selection at the time of inclusion, specifically QRS width>120 msec with a left bundle branch block (LBBB) morphology, HF with reduced ejection fraction (HFrEF) due to ischemic or dilated cardiomyopathy with a LVEF <35%, presence of sinus rhythm and NYHA class II or III (1-6). Patients also had to be capable of performing CPET and the respiratory maneuvers needed for cardiac output (CO) determination by inert gas rebreathing (IGR). Study exclusion criteria were comorbidities or other limitations that interfere with performing measurements during effort, major cardiovascular events or cardiovascular procedures within the previous 6 weeks, cardiovascular procedures planned within the next 6 months, significant pulmonary dysfunction. The study complies with the Declaration of Helsinki, the locally appointed Ethics Committee approved the research protocol (CCM-473), and informed consent was obtained from all patients.

2.2.1 Pre-CRT evaluation: Before CRT, all patients received careful clinical evaluation associated with collection of history and recent instrumental data to confirm CRT selection. All subjects underwent an ECG, a standard echocardiogram, a CPET for familiarization purposes, and at least one teaching section to understand and familiarize with the IGR methodology. Finally, a CPET based on a personalized ramp protocol aimed at achieving maximal effort was performed, along with a measurement of CO by IGR at rest and at peak exercise. Arteriovenous O2 content difference (ΔC(a-v)O2) was calculated following the Fick principle: peak VO2 = CO × ΔC(a-v)O2. Resting stroke volume (SV) was calculated both by IGR following the formula: CO/heart rate (HR), and by echocardiographic method following the formula: end-diastolic volume (EDV) - end-systolic volume (ESV).

2.2.2 Post-CRT evaluation: After at least 6 months of follow-up (range 6-16), all patients underwent clinical and instrumental re-evaluation, performing a CPET with CO measurement at rest and at peak exercise and using the same ramp workload protocol of the pre-CRT test. Data analysis was performed considering the entire population and assessing patients with different exercise performance. To do so, patients were grouped considering pre-CRT tertiles of peak VO2.

Standard two-dimensional, color, and spectral Doppler measurements were performed. No specific data on ventricular dissynchrony were collected. LVEF was determined using the Simpson’s rule algorithm by tracing the left ventricular 2D-area in standard apical two- and four-chamber view at end-systole and end-diastole [13].

CPET was performed on a cycle ergometer with progressive work-rate increase in a ramp pattern, after 3 minutes of rest and 3 minutes of unloaded cycling. Expiratory O2, carbon dioxide (CO2), and ventilation were measured breath by breath (Innocor® rebreathing system, Innovision A/S, Odense, Denmark). A 12-lead ECG was recorded continuously during the test (Marquette, Case800, Milwaukee, WI). Patients were strongly encouraged to perform a maximal test, allowing the final 30 seconds for the rebreathing maneuver. The work-rate increase during the test was set to achieve peak exercise in 8 to 10 minutes during the increasing work-rate period [14, 15]. Peak VO2 is reported as a mean over the last 20 seconds [15].

Non-invasive CO measurements were performed during CPET at baseline and at peak exercise using the Innocor rebreathing system (Innovision A/S, Odense, Denmark) [16-21]. The IGR technique uses an oxygen-enriched mixture of an inert soluble gas (0.5% nitrous oxide-N2O) and an inert insoluble gas (0.1% Sulphur Hexafluoride-SF6) from a pre-filled bag. Patients breathe into a respiratory valve via a mouthpiece and a bacterial filter with a nose clip. At the end of the expiration, the valve is activated, so that the patient re-breaths from the pre-filled bag for a period of 10-20 seconds. After this period, the patient is switched back to ambient air, and CO measurement is terminated. Photo-acoustic analyzers measure gas concentration over a 5-breath interval. SF6 is insoluble in blood, and it is used to determine lung volume. N2O is soluble in blood, and its concentration decreases during rebreathing with a rate proportional to pulmonary blood flow (PBF), that is the blood flow that perfuses the active part of the alveoli. CO is equal to PBF when the arterial oxygen saturation measure (SpO2) is high (>98% using the pulse oximeter), showing the absence of pulmonary shunt flow or the presence of only a negligible one. Two experts independently read each test, and the results were averaged.

Continuous variables were presented as mean ± standard deviation (SD). Differences between before and after CRT were evaluated by paired t-test. The differences between patients in tertiles of pre-CRT peak VO2 were measured by ANOVA. Tests were two sided. P-values <0.05 were considered statistically significant. Analyses were performed by SAS version 9.4 (SAS Institute Inc., Cary, NC).

Of the 100 patients enrolled, 7 were unable to complete the follow-up for different reasons: 1 subject died (cardiovascular death), 2 had cerebral strokes, 1 had atrial fibrillation, 1 had aortic aneurism, 1 became unable to perform exercise due to claudicatio intermittens, and 1 subject was lost to follow-up. The data of the remaining 93 patients (age 67 ± 10; M/F 77/16) were analyzed (Table 1 and Table 2). CRT was successfully implanted in all 93 subjects without major complications. CPET with CO measurement at rest and at peak exercise was performed in all patients, before and after CRT (average time between tests 8 ± 3 months).

In brief, at rest, CRT improves LVEF but not CO or SV in all categories of HF. At peak exercise, CRT improves SV and CO in all patients, but it increases peak VO2 only in severe HF patients (Figure 3). 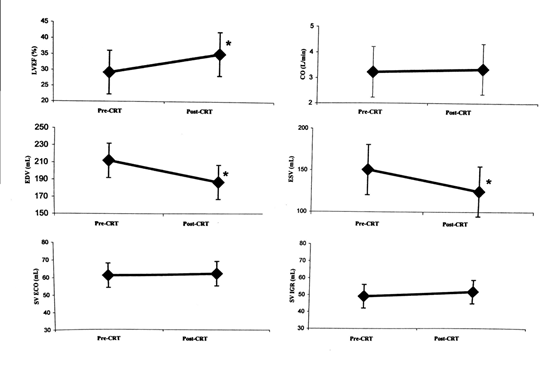 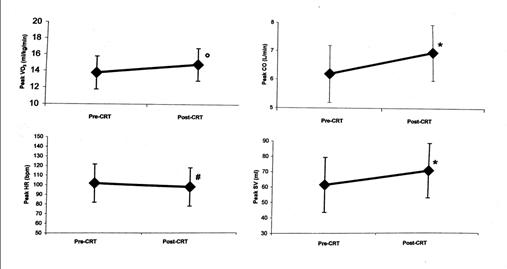 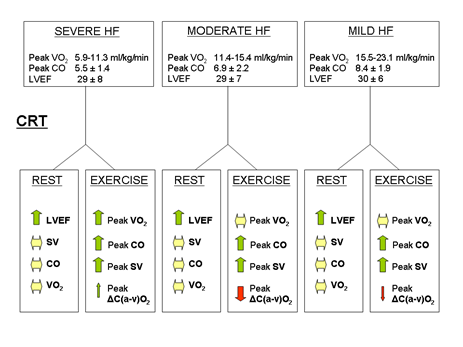 We non-invasively measured CO at rest and at peak exercise using IGR method. Since 2005, IGR has been shown to be a reliable technique to measure CO at rest and during exercise in HF patients, having been compared to CO measurement by thermodilution and Fick [17, 20]. Several authors have successfully used IGR in HF to measure CO at rest, during sub-maximal exercise, or at peak exercise [16-21]. Most importantly, IGR allows evaluating exercise with patients sitting on the bike, avoiding positions unnatural for exercise, such as laying on a side or supine as during stress echo or during exercise with invasive measurements. Schlosshan et al. [22] tested 15 HF patients before and after CRT, and they suggested a possible role of CO change as the cause of VO2 improvement. At rest, our data showed that, although LVEF increased due to LV volume reduction, CO and SV remained unchanged, underlining the real meaning of LVEF as an LV reverse remodeling parameter with almost no value as a hemodynamic marker. Differently, at peak exercise, our study confirmed in a large scale the pioneering report of Schlosshan et al., showing that CRT improves peak VO2 through an increase of CO and SV at peak exercise, but only in patients with severe HF.

CRT indication is based on parameters measured at rest-specifically LBBB morphology and low LVEF on top of a NYHA class ≥II – and recognized indicators of successful CRT are clinical changes, LVEF improvement, and QRS shortening [1-6]. However, there is no clear definition of post-CRT functional changes. Indeed, apart from NYHA class evaluation, exercise performance is hardly considered, both in patient selection and in the assessment of CRT efficacy. As regards the response to exercise, improvement following CRT has been shown in HF patients in NYHA class II to IV, and also in a few class I patients, i.e. across virtually all patients with symptomatic HF, without significant differences between NYHA classes [23, 24]. Differently, peak VO2, which is the gold standard of exercise performance evaluation, has been reported to increase after CRT only in patients with severely reduced exercise performance(10), and specifically in subjects with a peak VO2<12 ml/kg/min [9, 11], suggesting inconsistency between NYHA class improvement and peak VO2 changes. Our data confirm these findings, suggesting a low threshold of peak VO2 in CRT responders (peak VO2<11.3 ml/min/kg).

The simultaneous measurement of VO2 and CO during exercise is an advance in the post-CRT evaluation of HF patients. Indeed, knowing both CO and VO2 allows calculating the ΔC(a-v)O2 and, in practice, to discriminate between post-CRT change due to LV pump function improvement and improvement due to peripheral causes such as blood flow distribution, O2 extraction, and muscle function [25]. Our data showed that peak CO increase after CRT is similar in all patients and unaffected by pre-CRT peak VO2, while peak VO2 showed no significant increase after CRT in patients with peak VO2>11.3 ml/min/kg. The difference is by necessity associated with the behavior of ΔC(a-v)O2, which reflects muscle O2 extraction, muscle function, and blood flow distribution during exercise. Notably, very similar data were observed in the post-HF rehabilitation setting [26]. Specifically, knowing the hemodynamic response to CRT during exercise opens a new scenario for patients with improved CO but similar VO2. We believe that post-CRT patients who increase their peak CO but not their peak VO2 are likely a suitable target of an intensive rehabilitation program, which was not performed in the studied patients.

In conclusion, CRT improves exercise performance in HF patients by changing peak exercise CO and SV in all classes of HF patients. However, post CRT peak CO improvement translates into peak VO2 improvement only in patients with severe HF.