Background: Every four minutes someone is admitted to hospital suffering from a heart attack or a chest pain event in the UK, totalling over 150,000 hospitalisations a year. Chest pain is one of the most common presentations in the emergency department and quite a few of them get admitted as low risk ACS patients. With the developments in technology, we have increasingly sensitive troponin assays available. Previous-generation troponin assays have been used as diagnostic and prognostic markers in acute coronary syndrome patients and for risk stratification to guide triage decisions and aid in treatment selection. New, high-sensitivity troponin assays represent an important advance with added sensitivity for cardiac myocyte necrosis. High-sensitivity troponin assays detect concentrations of the same proteins that conventional sensitivity assays are aimed at detecting, just in much lower concentrations.

Methods: We did the retrospective data analysis for 300 patients presenting in the emergency department of University hospitals Birmingham in January to March 2016. All adult patients admitted with the diagnosis of suspected ACS were included in the study.

Conclusion: We have 5-10 patients every day presenting to the emergency department with chest pain. About 50% of them get admitted with the diagnosis of suspected ACS. 81% of our patients could have been potentially discharged home by using high sensitivity troponin at 0 and 2 hours and hence could have avoided 81% admissions. This in turn could have saved quite some money. With the growing pressure in the emergency departments due to ever increasing number of patients all these high sensitivity tests could potentially make some difference.

Acute chest pain can herald serious cardiovascular events such as acute coronary syndrome (ACS). However, the differential diagnosis of acute chest pain is broad and the consequences of a misdiagnosis can be detrimental. Furthermore, the patient load experienced in the emergency department (ED) on a daily basis combined with the 4 hour breech time frame in the NHS adds to this pressure. In such situations, it is quiet important to safely rule in or rule out acute coronary syndrome within this time frame, which ultimately would help to reduce the number of admissions to acute medical beds. A lot of admissions depend on the clinical discretion of the emergency medicine physician who see the patient on presentation to ED [1-4].

However, if this interval between serial troponins can be reduced to 2 hours, a majority of the admissions can be avoided by safely ruling out the possibility of ACS in low risk patients.

This was a retrospective observational study done in the Emergency Department of University Hospitals Birmingham NHS Foundation Trust in the months of February - March 2016.

The initial standard clinical workup of these patients included a 12-lead electrocardiogram (ECG) and blood tests including high sensitivity troponin levels and a chest radiograph.

The pre-defined outcome measures for the study were to record the proportion of patients that had a 2nd troponin done and had a final diagnosis of ACS on discharge after admission for a suspected ACS diagnosis. The second important factor was to observe what proportion of the admitted patients had a non-life threatening chest pain as discharge on diagnosis.

This outcome measure was chosen on the basis of the hypothesis that if the patients with a low risk for ACS, have the serial troponins done at interval of 2 hours instead of 3 , they can be discharged from ED by safely ruling out ACS.

PE , SVT, pericarditis, gastritis, AF, pneumothorax and COPD. In 38.3% of the patients there was no specific cause detected for the chest pain and were labelled ‘’Non-specific chest pain’’ as a diagnosis on discharge (Figure 2). The other important factor determined in this study was that the average length of stay in hospital was 33 hours. 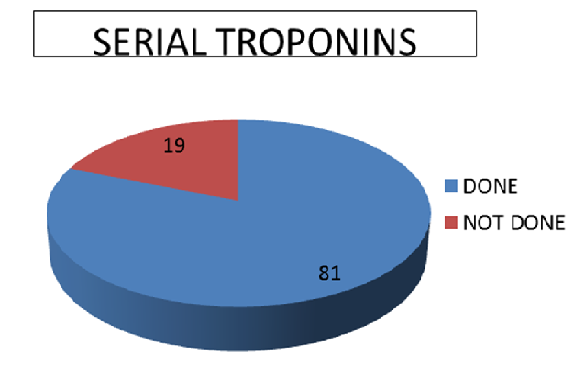 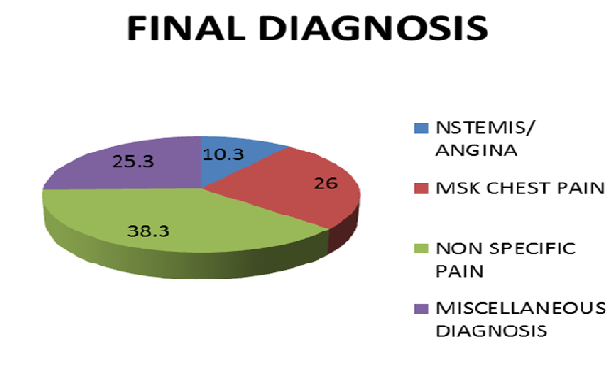 The main findings of the study can be summarized as follows. 1) amongst the patients admitted for suspected ACS, only 10.3% had a final diagnosis of ACS while the majority patients were discharged home or had an alternative diagnosis. 2) average duration of stay in hospital was 33 hours 3) majority of the patients admitted under the medical team, were admitted for a 2nd troponin 4) more than 60% of patients had non-life threatening chest pain as diagnosis on discharge which did not warrant any further investigations.

The purpose of this study was to observe the impact of the large number of admissions for suspected ACS diagnosis, which could be potentially avoided if the interval between serial troponins could be reduced to 2 hours. With the increasing numbers of patients presenting to the emergency department and the need for acute medical beds in hospitals, the idea to be able to safely discharge low risk patients from ED would have a great impact in reducing admissions and in turn saving money.

As highlighted in the results section of this article, more than 60% patients were discharged after 2 serial Hs- TnT were negative and were diagnosed with non-life threatening chest pain ie musculoskeletal and non-specific chest pain respectively.

It is also worth considering here that combining an effective risk stratification score such as TIMI or GRACE score along with two serial high sensitivity troponins done 2 hours apart in ED would help emergency physicians safely discharge these patients.

We have 5-10 patients every day presenting to the emergency department with chest pain. About 50% of them get admitted with the diagnosis of ACS. 86% of our patients could have been potentially discharged home by using high sensitivity troponin at 0 and 2 hours and hence could have avoided 86% admissions. This in turn could have saved quite some money. With the growing pressure in the emergency departments due to ever increasing number of patients all these high sensitivity tests could potentially make some difference.