Cardiomyopathies are a group of disorders defined by structural and functional abnormalities of the ventricles that are unexplained by coronary artery disease or abnormal loading conditions. They have been subdivided into primary diseases by particular morphological and functional criteria [1]. In this case we discuss about the subgroup of Hypertrophic Cardiomyopathy. It is an inherited disorder characterized by increased LV wall thickness that cannot be justified by other pathological conditions. The diagnosis of HCM in adults requires more than 15mm LV wall thickness, except for first-degree relatives of a HCM patient where the limit is lower (normal values are below 11 mm). Imaging methods, like CMR and Echocardiography, can be utilized to conduct accurate measurements. Interestingly, approximately 10% of patients with HCM have an LV mid-cavity obstruction, while 25% of them have an LV apical aneurysm, a condition that leads to higher cardiovascular mortality [1]. In a large HCM patient cohort,it has been found that 2% of HCM patients may have an LV apical aneurysm [2]. On the other hand, LV apical aneurysms can occur in approximately 1% of patients with HCM in the absence of coronary artery disease (CAD) [3].

A 77-year-old female patient, with end-stage chronic kidney disease on peritoneal dialysis, was admitted to a district hospital with a 3-hour history of continuous retrosternal chest pain. Her medical history included arterial hypertension (15 years history treated by a β-blocker and a calcium channel blocker), dyslipidaemia (15 years history treated by atorvastatin) and paroxysmal atrial fibrillation. She denied alcohol consumption, tobacco smoking and illicit drug use. Her admission ECG showed nonspecific ST segment changes in the anterior wall suggestive of myocardial ischemia. Abnormal HS troponin I levels were detected with no other myocardial necrosis markers elevated. The symptoms improved the following days and the discharge ECG one week later showed negative T waves (anterolateral wall) with no associated abnormal Q waves (Figure 1A). Nonspecific myocardial injury was the final diagnosis and a follow-up visit was scheduled at one month.

Figure 1: (A) Discharge ECG. Note the specific negative T waves in leads I, aVL, V3-V6 and the biphasic T waves in the inferior leads indicative of myocardial injury; (B) An old, near normal patient’s ECG.

Three weeks later, the patient was urgently referred to our Heart Failure Clinic, with complaints of severe fatigue and dyspnoea, and a thorough imaging and functional assessment was scheduled. On presentation, a 12-lead ECG showed normal sinus rhythm (heart rate: 68 beats/min) with negative T wave morphology in lateral and anterior leads. The blood pressure was 100/70 mmHg. The patient underwent an echocardiogram that depicted an LV apical aneurysm. The anatomy of the aneurysm was better evaluated by using contrast echocardiography (Video 1). Additionally, concentric LV wall hypertrophy was documented with a measured interventricular septal end-diastolic wall thickness of 14.5 mm. No obstruction at the level of LV outflow tract was observed and the LVEF was 45-50% (Video 2). The patient provided us a 2-year-old ECG with neither negative T waves nor evidence of LV hypertrophy, except for a marginal R wave height in leads I and aVL and a LV strain configuration in aVL (Figure 1B). A coronary angiography was performed, in order to evaluate the presence of obstructive CAD as the underlying mechanism of the aneurysm, but revealed normal coronary artery anatomy (Figure 2A). 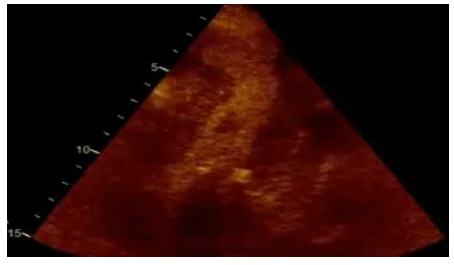 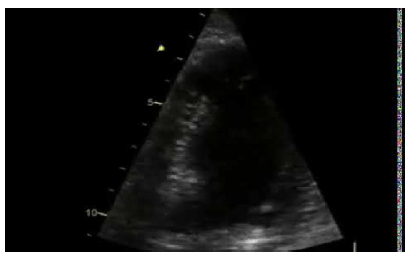 Ventriculography was conducted, which showed normal systolic function of the basal segments of the left ventricle and the presence of an LV apical aneurysm (Fiure 2B, Video 3).The patient was discharged with dual antiplatelet therapy and optimal heart failure medical treatment, including an angiotensin-converting-enzyme inhibitor, a β-blocker, an aldosterone antagonist and a statin. A few days later she was rushed to the emergency room for severe dyspnoea and hypotension. As a result, she was hospitalized for 5 days with the diagnosis of heart failure decompensation. Due to HS troponin I rise, she underwent a CT coronary angiography, which once more documented LV hypertrophy, LV apical aneurysm with an attached mural thrombus and confirmed the absence of significant CAD (Figure 3A, Video 4).

In order to further clarify the diagnosis and characterize LV hypertrophy and evidence of myocardial necrosis, CMR was performed. CMR showed moderate hypertrophy of the basal segment of the interventricular septum (14.5 mm) and of the mid inferior wall (14mm) with a characteristic patchy fibrosis of the septum, following Late Gadolinium Enhancement (LGE) technique. Interestingly, there was evidence of end-systolic midventricular obstruction that was accompanied by apical aneurysm (11cm2) with mural thrombus and a LVEF of 40% (Figure 3B, Video 5). 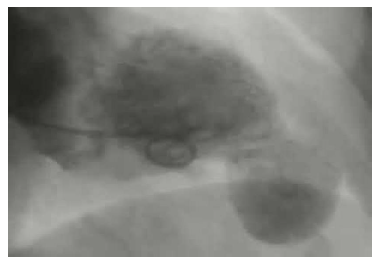 Video 3: Left ventriculography. Note the normal systolic thickening of the basal segments and the typical feature of the LV aneurysm. 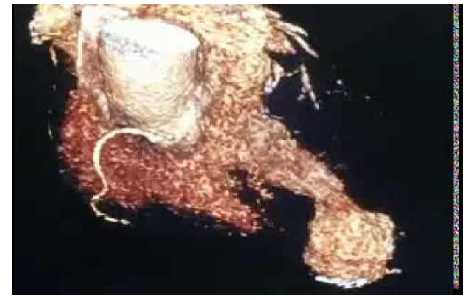 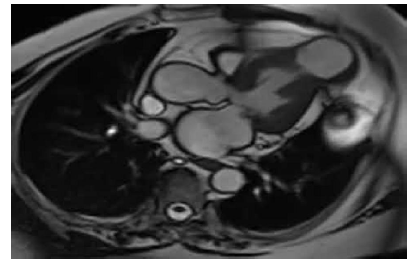 By comparing the 2-year-old ECG (Figure 1B) with the recent one we concluded that the recent negative T waves in the anterior-lateral leads were secondary to myocardial infarction and not to LV hypertrophy due to HCM, since they were absent in the early ECG.

Therefore, we concluded that the final diagnosis was MINOCA associated with an LV apical aneurysm in a patient with HCM and midventricular obstruction. Recent follow-ups, consisting of ECG and Holter rhythm monitoring did not evidence any ventricular tachyarrhytmias and repeated echocardiograms did not reveal significant changes. The patient received treatment for heart failure and dyslipidaemia, dual antiplatelet treatment but not antithrombotics, due to her high frailty index. We advised a screening test to be conducted in her first degree relatives, with an ECG and an Echocardiogram, for possible subclinical HCM detection.

We present an uncommon case of a patient with HCM and midventricular obstruction associated with an LV apical aneurysm following a recent MINOCA hospitalization. For the final diagnosis to be made, serial ECG changes and multimodality imaging were used as appropriate.

Typically in this case, CMR documented evidence of HCM that was accompanied by an LV apical aneurysm with mural thrombus, evidence of transmural myocardial necrosis and a LVEF of 40%. The presence of myocardial necrosis established the correct diagnosis of myocardial infarction associated with apical LV aneurysm. The type of myocardial infarction was considered as MINOCA due to the absence of significant coronary artery stenosis following coronary angiography. This case might satisfy the condition of HCM with LV apical aneurysm in the absence of CAD, which occurs in approximately 1% of HCM patients [3]. This phenotype remains greatly underrecognised, is usually associated with midventricular obstruction and requires a high index of clinical suspicion and appropriate imaging assessment [2]. Although the cause of LV apical aneurysm formation in patients with HCM and normal coronary arteries remains yet unknown, several hypotheses have been made. The first hypothesis attributes their formation to genetic predisposition, the second one to myocardial bridging and the third one to mid-cavitary LV obstruction with elevated intra-cavitary systolic pressures [2]. In the case we are describing, midventricular obstruction might be the cause of the apical aneurysm but the evidence of myocardial necrosis suggested that this was indeed the true cause of the aneurysm.

There are many cases of patients with HCM where the investigation with ECG and echocardiogram fail to reach a diagnosis, in contrast to CMR. This occurs most frequently in apical HCM [4]. Martin et al. investigated 28 HCM patients with LV apical aneurysm and only 57% of the aneurysms where recognised by echocardiography. In the remaining patients, apical aneurysms were identified only by CMR. The 2-dimensional echocardiography proved unreliable in detecting smaller aneurysms. CMR is the most effective imaging technique for the characterization of both the aneurysm and the contiguous myocardial fibrosis[2].  In this case, CMR depicted with accuracy the typical patchy myocardial fibrosis suggestive of HCM.

MINOCA typically occurs in patients younger than those with obstructive CAD. Moreover, in obstructive CAD the incidence of acute myocardial infarction is greater in young and middle-aged males than females, while in MINOCA there is only a slight male preponderance. Therefore, the factors underlying MINOCA presence are different[5]. The proposed mechanisms for MINOCA include coronary vasospasm, coronary thrombosis in situ or embolization from distal source with spontaneous lysis, cocaine abuse, viral myocarditis, aortic dissection, hypercoagulable states, autoimmune vasculitis and carbon monoxide poisoning[6]. MINOCA has been rarely associated with the development of an LV aneurysm[7]. In the case we are presenting the careful reading of the ECGs and the negative coronary angiography was the clue for the final diagnosis. The observation of T wave inversions in the last ECGs, which were absent in the old ones, was important, since they were attributed to ischemia rather than LV hypertrophy associated with HCM.

Finally, all patients with apical aneurysms have been considered high-risk due to the possibility of thrombus formation, ventricular tachyarrhythmia, sudden cardiac death and perfusion defects[8]. All of the above underline the importance of early diagnosis. It is strongly recommended that these patients follow a proper anticoagulation strategy, in order to be protected against thromboembolic events, and that they be evaluated for prophylactic implantable cardioverter defibrillator (ICD) implantation [2].

All authors declare that there is no conflict of interest.

Apical aneurysms in patients with HCM are an underrecognised but clinically important condition, which however may be missed by echocardiography, contrary to CMR. In this case CMR led to the detection of HCM associated with an LV apical aneurysm and mural thrombus secondary to MINOCA. Clinicians should pay special attention to this clinical entity to avoid misdiagnosis or underdiagnosis and prevent sudden death, which might be the result of the aneurysm or the condition itself. MINOCA and not only large ST elevation myocardial infarction might produce LV apical aneurysms and HF symptoms.