Background: To diagnose ischemia in patients with left bundle branch block (LBBB) patients non-invasively is always a diagnostic challenge. Many of the non-invasive modalities like stress test, nuclear imaging, cardiac CT and MRI that are routinely used to detect ischemia in recent times have their own limitations when used in patients with LBBB. Tissue Doppler imaging (TDI) has shown promising results in detecting ischemia in LBBB patients in various studies.

Conclusions: TDI may be useful to identify ischemia in patients with LBBB.

Figure 1: TDI in Normal and Abnormal.

Table-1 shows that baseline characteristics are comparable between the groups. Though p value for heart rate was statistically significant, when considered clinically it is insignificant value falls within normal limits.

Table- 3 shows the results of Echo Doppler analysis. Patient with LAD stenosis showed a mild reduction in iso-volumic relaxation time when compared to other group. No differences were found in other variables between the two groups. 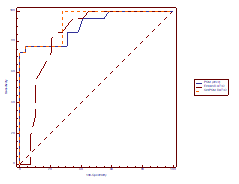 The ideal cut – off values of PSM, Em/Am ratio and Sm/PSM to predict LAD stenosis were >0.63, ≤0.73 and ≤0.81. The positive likelihood ratios of PSM and Sm/PSM ratio variables were higher than other variables and the negative likelihood ratios of PSM and Sm/PSM variables were lower than other variables. An Sm/PSM ratio of ≤0.81 was found in 77% of patients with LAD stenosis and only 3% of patients without LAD stenosis with a sensitivity of 77%, specificity of 96%, positive predictive value of 94% and negative predictive value of 85%.

PSM is a delayed ejection motion of myocardium occurring in iso-volumic relaxation time (IVRT) about 100 milli seconds after aortic valve closure. Gibson et al, first described PSM by cine-ventriculograms 4-hours post myocardial infraction [9]. PSM is an early and sensitive marker of ischemia [10,11]. PSM is seen in akinetic, hypokinetic and dyskinetic segments. But the mechanism of PSM slightly varies among these segments. In dyskinetic segments, PSM is due to passive inward movements caused by adjacent normally contracting segments. In hypokinetic segments, it is due to delayed active contraction appearing after LV unloading and decrease in regional wall stress [12]. PSM can also be seen in non-ischemic myocardium i.e. in patients free of CAD, such as LVH, LV volume overload and even in healthy subjects [13,14,15]. In our study also PSM is seen not only in patients with LBBB with LAD stenosis but also in patients with LBBB without LAD stenosis. So, when we analyze the differences, PSM occurring in patients with LAD stenosis is of higher amplitude, delayed (> 100ms from aortic valve closure) and associated with reduced myocardial systolic velocities. In our study, PSM value of > 6.3 m/s was found in 77% of LBBB patients with LAD stenosis and 3% in patients without LAD stenosis. So when we set of a cut-off value for PSM >6.3 m/s, it had 77% sensitivity and 96% specificity in detecting LBBB patients with LAD stenosis. Systolic phase and early diastolic relaxation phases of cardiac cycle are high energy consuming processes and are very sensitive to ischemia. So systolic (Sm) and early diastolic (Em) myocardial velocities are reduced in patients with ischemia [16,17,18,19]. Similarly late diastolic phase of cardiac cycle is relatively passive and less energy consuming compared to the above phases. Late diastolic (Am) myocardial velocities are increased in patients with ischemia [20]. In our study also Em/Am ratio is reversed in LBBB patients with ischemia. In this study, Sm/Psm ratio < 0.8 LAD stenosis in LBBB patients with 77% sensitivity and 96% specificity and negative predictive value of 85%. Similar results were obtained by Citro et al, in his study [21]. Limitations of the present study was that the TDI sampling was limited to IVS and LV lateral mitral annulus assuming dyskinesia due to LBBB is predominantly evident at the septal level. The study, would have been more comprehensive if we had evaluated other LV segments also. Another limitation is that in clinical setting, measurement of PSM needs patience, technical feasibility and additional time to acquire and interpret during routine echo evaluation.

Authors have no conflict of interest.