The authors report the successful removal of a paraganglioma associated with horseshoe kidney after preoperative embolization and two previous failed surgical attempts undergone in another center. Complete excision of the tumour was performed smoothly. Total blood loss was 205 ml and the surg-ical time was approximately 160 minutes. The posto-per-ative period was uneventful. Histological findings were of paraganglioma, and there was no surgical margin. This case emphasizes the necessity to include preoperative embolization in the manage-ment of difficult or inextirpable retro-peritoneal para-ganglioma and should be considered in difficult case.

Arising from extra-adrenal chromaffin tissues, paraganglioma remains rare tumors ranging in incidence from 0.005% to 0.1% in the general population. Surgical excision is the treatment of choice for both primary and recurrent tumours [1, 2]. The  Authors  report  a  case  with  a  rich   icono-graphy   of   a   voluminous abdominal paragang-lioma that is associated  with  horseshoe  kidney  in  which  pre-  operative  embolization  therapy  was  an  alternative  potentially  enabling  local  control  with  less  morbidity.  Here  we  report  that  such  case  successfully  treated  by   trans arterial  embolization  (TAE).  This  case  highlights  the  need  for  preoperative  embolization as part of the multi-disciplinary approach to the management of paragangliomain  difficult  anatomical  locations  by  the   surgeon   and   could   suggest   new modalities of treatment of this entity.

A 39-year-old man was referred from another urological centre for “inextirpable” functional retroperitoneal tumour (Figure 1).Measurements of plasma and urinary catecholamine and urinary total metanephrines ruled in the diagnosis with diabetes and hypertension. The month before his admission he has undergone two failed surgical attempts in another center to remove the lesion. A laparoscopic approach was attempted at first but was aborted due to dense adhesion between tumor and great vessels (Figure 2). Ten days later, an open procedure was subsequently performed unsuccessfully. Unexpectedly at laparotomy, despite adequate pre-operative imaging, once again the tumor was unable to be resected due to hemorrhage. A Planned blockage of blood vessels was then decided. Trans femoral access is obtained and a 5 Fr sheath is placed. A 5 Fr diagnostic catheter is then advanced into the artery on the left side of the tumor and angiography is performed to determine the arterial feeders of the tumor. Angiography showed three arteries with one dominant feeding artery arising from the left side of aortic artery (Figure 3a). Selective angiography was performed 2 days before the surgical removal of the tumor, and the feeding artery was successfully embolized with 3steel coils (Terrumo ®). Follow-up imaging revealed that devascularisation of at least 60% of the initial tumor blush was obtained (Figure 3b). 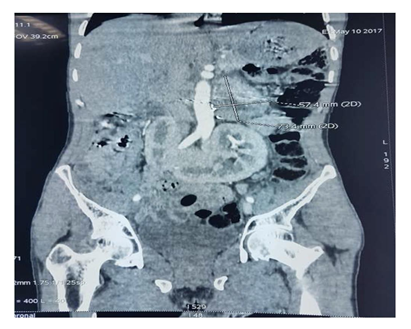 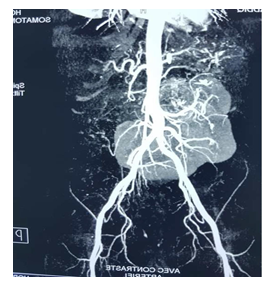 Figure 2: CT Angiography showing multiples tortuous arteries rising from the left side of the abdominal aorta. 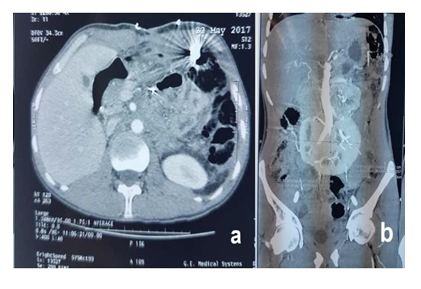 The patient then underwent surgical management by a bilateral subcostal approach. Per-operative exploration found a retroperitoneal tumor of about 07 cm in diameter that was soft and encapsulated. On exploration, there was a large blood supply by a 12 mm arterial rising directly from lateral side aorta. Complete excision of the tumor was performed smoothly after dissection along the basement (Figure 4 a, b). Total blood loss was 205 ml and the surgical time was approximately 160 minutes. The postoperative period was uneventful. His pre-operative symptoms improved, and he was discharged home one week after. At 6-months follow-up there was no recurrence of his symptoms. Histological findings were of paraganglioma, with negative surgical margin confirmed by postoperative histopathology (Figure 5). 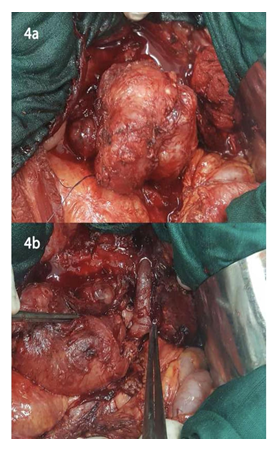 Figure 4: Preoperative photograph showing (a) ) paraganglioma involving the anterior face of left renal vein above the upper pole of left kidney (b) after surgical detachment from left renal vein.

Figure 5: Specimen of 7 cm of diameter.

Although described for the first time in 1886, the diagnosis of PGL remains a challenge, because patients do not present with characteristic signs and symptoms [1-3]. A paraganglioma may be discovered in the absence of any symptom. For patients with functional tumor the most common type of presenting symptom was the classic triad of symptoms associated with catecholamine-secreting para-ganglioma: episodic headache, diaphoresis and tachycardia. The surgical removal of a tumor can often be in theory made easier if the blood supply to the mass is decreased prior to surgeryand allowing better visualization [3-5]. Laparoscopic resection of PG is considered challenging because of the altered anatomic location, dense peritumoral adhesions, high vascularity envelope, and proximity to major blood vessels [5, 6]. In our case, the anatomic alterations were majored with the association with a horseshoe kidney. Horseshoe kidneys are different in three main ways: location, orientation, and vasculature showing a greater variation in the origin and number of renal arteries and veins. Horseshoe kidney is the most common congenital renal fusion anomaly with an incidence of 1 in 400-600 individuals [7].

The pre-operative embolization of hyperactive vascular tumours is often performed to decrease intraoperative blood loss and facilitate tumor resection but its use in abdominal PG is controversial and still matter of debate [4, 5]. Conflicting data have been reported on the benefit of embolization, although the literature is limited to small single-centers series and case reports [3, 4, 6]. Several techniques concerning gloms tumor embolization via the endovascular route (arterial, venous, or combined) or through direct percutaneous puncture have been previously described in the literature. Therapeutic embolization is not free of risks: such procedures have an 8% rate of morbidity and a 2.5% rate of overall mortality but remains generally a safe procedure and most authors report low complication rates [5, 8]. Commonly used particles include gelatin sponge, polyvinyl alcohol (PVA), trys-acryl gelatin microspheres or coils. Prior identification of all possible anastomoses is important before the injection of such agents.

The resection of retroperitoneal paraganglioma presents a distinct challenge because the procedure can be associated with massive intraoperative blood losses. In 2016, XIAO-KE et al reported a large panel of 34 RPG in whom a patient with 7500 ml of blood loss during the removal of RPP and adjacent organ resection was required in 7 (21%) cases [9]. Few authors have reported using embolization as a useful presurgical adjunct for routine approach of paraganglioma [3, 10]. Apentcheko et al described a similar case in a 17 year old girl treated with partial embolization prior to surgery [11]. However, despite a blood loss of 50 cc and a surgical time estimated to 160 min, the authors conclude that inherent increased cost, potential risk during embolization cannot be recommended as a pre operative adjunct and should be only recommended for hype-vascularized tumor or when size is superior to 4 cm. Rosing et al has performed the same pre operative approach for a 12, 5 cm paraganglioma [12]. In both case, patients had undergone complete resections without complications or significant bleeding. Many authors reports same cases [13, 14]. In addition, Di Daniele et al reported a pelvic paraganglioma in young female patient successfully removed after initial TAE and marked decrease of circulating catecholamine`s levels [15]. To our knowledge, there are only two reported cases of RPG associated with horseshoe kidney and the only one managed with preoperative embolization [13, 14].

This case emphasizes the necessity to include preoperative embolization in the management of difficult or inextirpable retroperitoneal para-ganglioma and should be considered in difficult case. Additional studies with larger sample sizes and long-term follow- ups are required to validate the benefits of preoperative approach but small patient numbers make prospective trials difficult to conduct on this topic.

The Authors declare that there is no conflict of interest.

Informed consent has been obtained from the patient for publication of the case report and accompanying images.

This research received no specific grant from any funding agency in the public, commercial, or not-for- profit sectors.