Proton pump inhibitors (PPIs) are amongst the most commonly prescribed medications in the clinical setting. They are commonly used for the treatment of gastroesophageal reflux disease and are readily available over the counter. However, their irrational long term use has been repeatedly discouraged. PPIs are highly lipophilic and may adversely affect multiple physiological pathways of various organs. Over the past few decades, multiple clinical studies have linked PPI use with an increased risk of cardiovascular disease. In this review, we discuss the PPI-induced pathophysiological mechanisms that contribute to cardiovascular disease. Furthermore, we highlight clinical evidence that associates PPI use with an increased risk for various cardiovascular manifestations.

Since their Introduction in 1989, proton pump inhibitors (PPIs) have become the gold standard for the short-term therapy of various acid-related disorders. In the United States, over 100 million PPIs have been prescribed annually [1]. From a global perspective, an estimated 113 million PPI prescriptions are issued every year [1]. Their profound clinical efficacy and easy availability account for the staggering expenditure annually. Therefore, PPIs are one of the most commonly prescribed medications in the United States [2].

When used as recommended, PPIs are generally considered a safe class of medications. The food and drug administration (FDA) originally evaluated PPIs for short-term treatment. More specifically, they were approved for a treatment period of 4 weeks with no more than 2 treatment cycles per year [3]. However, in modern clinical practice, the inadvertent long term use and prescription of PPIs are quite common [4]. As a consequence, accumulating evidence from several clinical studies have associated several adverse events with long term PPI use. Adverse sequelae include cardiovascular disease, dementia, bone fractures, renal failure, nutritional deficiencies, enteric infections, and antiplatelet drug interactions [1,3]. In this review, we discuss possible pathophysiological mechanisms leading to the development of the cardiovascular disease. Furthermore, we also discuss the spectrum of cardiovascular involvement backed by clinical evidence.

2. The spectrum of cardiovascular involvement based on clinical evidence

In a meta-analysis, 14 observational studies were carefully analyzed to determine the association between proton pump inhibitor (PPI) use and cerebro-cardiovascular outcomes [5]. The study concluded that PPI use was associated with an increased risk of ischemic stroke (OR: 1.22, 95% CI: 1.08-1.36), myocardial infarction (MI; OR: 1.23, 95% CI: 1.14-1.32), and cardiovascular death (OR: 1.83, 95% CI: 1.69-1.98) [5]. In a Danish registry study, 214,998 patients were assessed for the risk of first-time ischemic stroke and myocardial infarction (MI) in long term PPI users [6]. Furthermore, the duration and dose of PPI use were also analyzed [6]. Follow up over the years revealed that PPI exposure was associated with an increased risk of ischemic stroke (HR 1.13; CI 1.08 -1.19; p <0.001 ) and MI (HR 1.31; CI 1.23 -1.39; p <0.001) [6]. A significant relationship was noted between the PPI dose and the occurrence of outcomes. More specifically, a low-dose PPI was not associated with any of the adverse outcomes [6]. However, high-dose PPI was significantly associated with increased rates of both outcomes [6]. Therefore, based on these findings, PPI use increases the risk for a first-time ischemic stroke. This risk is more commonly seen with the long term use of PPIs. Furthermore, a dose-response relationship can be appreciated between PPI use and stroke. Therefore, long term high dose PPI use is associated with the greatest risk for stroke.

In a meta-analysis conducted by Cheungpasitporn et al., 3 cohort studies, 5 cross-sectional studies, and a case-control study were analyzed cumulatively [7]. Its results showed that the pooled risk ratio of hypomagnesemia in patients with PPI use was 1.63 (95% CI, 1.14-2.23) [7]. More specifically, in these patients, the magnesium levels were noted below 1.6-1.7 mg/dL [7]. Park et al. also conducted a meta-analysis cumulatively of 115,455 patients [8]. Among patients taking PPI, 27.1% developed hypomagnesemia [8]. Whereas, 18.1% of patients who developed hypomagnesemia were not taking PPIs [8]. Therefore, it is quite evident that PPIs are notorious for causing life-threatening hypomagnesemia. Although not common, the physicians must monitor magnesium levels prior to and during PPI therapy administration. It has been hypothesized that PPIs disrupt the active uptake of magnesium across the bowel wall [9]. Furthermore, excessive losses in the gut have also been postulated as a possible mechanism [9]. These patients also present with other electrolyte abnormalities such as hypokalemia and hypocalcemia. Clinically, patients usually present with the classical signs of tremors, cramps, weakness, irritability, seizures, and carpopedal spasms. Furthermore, electrophysiological conduction defects such as torsades de pointes, ventricular tachycardias, and QT prolongation are evident.

The concomitant use of anticoagulants and PPIs has also gained much attention. Several clinical studies have implicated antagonistic interactions between clopidogrel and certain types of PPI [10-11]. The metabolism of both classes of drugs is dependent on cytochrome (CYP) 2C19 [10]. Co-administration results in competition for CYP2C19 and as a consequence reduced effective plasma therapeutic dose and clinical benefit. This accounts for the possible increase in the risk of major adverse cardiac events (MACE). It is vital to note that the increased risk of adverse events is not due to metabolic interactions between esomeprazole and clopidogrel. This is evident from a meta-analysis of 23 studies conducted by Kwok and colleagues [12]. It was noted that a 30% increase in MACE was seen in patients being administered PPIs independently of clopidogrel use [12]. The increased risk of MACE was more evident with long term PPI administration (> 6 months) [12]. Furthermore, an increased risk of recurrent myocardial infarction (MI) has been reported in patients hospitalized for acute MI [13]. In the General Population, PPI use is independently linked to the first time cardiovascular event. Casula et al. identified 17,832 cases of new PPI users [14]. From which, 11,616 cases were hospitalized for coronary artery disease and 6467 for ischemic stroke [14]. Further analysis revealed that the risk for cardiovascular events was higher in the current (OR 1.61; 95%CI 1.55–1.68) and recent users (OR 1.15; 95%CI 1.06–1.26) [14]. Furthermore, this association was also noted in clinical subgroups based on exposure duration, statin use, and antithrombotic medication use [14].

Several clinical studies have also indicated an increased risk of short term mortality in patients with concomitant use of clopidogrel and PPI after a primary cutaneous intervention (PCI) [15,16]. Bundhun et al. analyzed a total of 11 clinical studies that cumulatively involved 84,729 patients [15]. Of the total, 29,235 patients belonged to the PPI group. Whereas, 55,494 patients belonged to the non-PPI group. The risk of short term mortality and target vessel revascularization was higher in the PPI group (OR 1.55) [15]. Furthermore, the incidence of long term MACE, stent thrombosis, and myocardial infarction post-PCI was also higher in the PPI group [15]. PPI should be cautiously prescribed to patients taking aspirin and clopidogrel. Combination therapy can result in increased rates of MACE, stent thrombosis, and revascularization [16]. However, this combination therapy has proven to be quite effective in reducing the risk of GI bleeding. Therefore, in such patients, GI benefits should be weighed against the risk of MACE [16].

Several underlying mechanisms have been postulated as the culprit of cardiovascular dysfunction with PPI use. These include the increased synthesis of chromogranin A (CgA) levels, reduced nitric oxide, endothelial cell dysfunction, endothelial senescence, hypomagnesemia, electrolyte imbalance, reduced clopidogrel bioactivation, reduced vitamin B12 absorption, and decreased dimethylarginine dimethylaminohydrolase (DDAH) activity. A summary of the proposed mechanisms has been depicted in Figure 1 below. 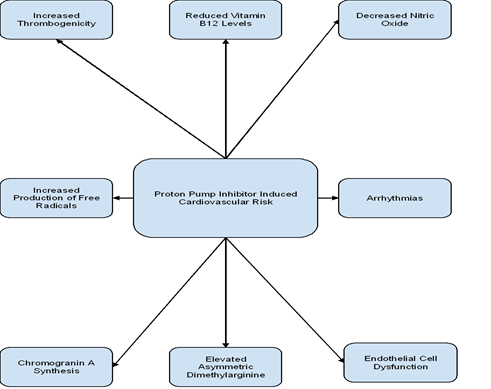 Long-term administration of PPIs has been associated with increased production of free radicals [17]. In turn, this is thought to arise as a consequence of PPI-induced inhibition of the endothelial lysosome proton pump [17]. This leads to protein aggregation due to reduced lysosomal acidification and enzyme function. Downstream biological effects of protein aggregation result in endothelial senescence [17]. Endothelial aging is thought to arise due to telomere shortening, epithelial-to-mesenchymal transition, reduced epithelial proliferation, and angiogenesis (Figure 2) [17]. Impaired nitric oxide synthase synthesis and increased generation of reactive oxygen species also aid in endothelial cell dysfunction [18]. Furthermore, upon exposure to PPI, senescent cells undergo a change in its secretory phenotype [19]. More specifically, the downregulation of genes encoding anti-atherogenic proteins in senescent cells has been noted [19]. As a consequence, PPIs tend to promote pro-atherogenic tendencies in senescent endothelial cells.

Dietary derived nitrites and nitrates produced by the oral flora get converted to nitrous acid [25]. Spontaneous release of nitric acid from nitrous acid follows [25]. PPIs via inhibition of gastric proton pumps decrease gastric acidity. As a consequence, the spontaneous release of nitric oxide from nitrous acid is hindered [25]. In addition to the regular pathway, nitric oxide can also be synthesized via the enterosalivary pathway. It is also known as the nitrate-nitrite-nitric oxide pathway [26]. In this pathway, the endogenous nitric oxide can be recycled to nitrate via oxidation [27]. The nitrate is then actively concentrated in the saliva, where it can be converted to nitrite by the oral flora [27]. As it is quite evident from our discussion above, PPIs reduced nitric oxide production. Therefore, the downstream levels of nitrite and nitrate should also be expected to reduce. In summary, one can expect reduced levels of nitric oxide in the circulatory reservoir.

Usually Implicated as a biomarker of neuroendocrine neoplasias, chromogranin A levels are also upregulated with PPI use [28]. At the molecular level, chromogranin A exerts adaptive vasodilatory and cardio-regulatory effects [29]. Chromogranin A is the precursor to vasostatins and catestatins [29]. Vasostatins act as a vasorelaxant to promote negative lusitropic and negative ionotropic effects [30]. Furthermore, they also inhibit the release of catecholamines [30]. Chromogranin A also upregulates the release of endothelin-1 [31]. Being a potent vasoconstrictor, endothelin-1 via endothelial dysfunction promotes pro-inflammatory and pro-atherogenic pathways [32]. 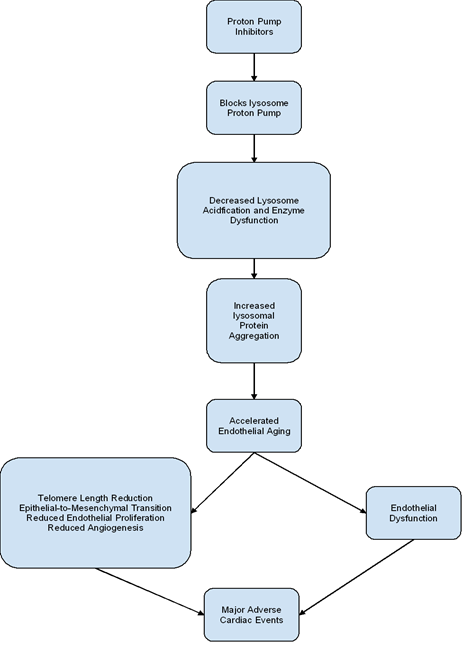 As per the review of the literature, it is quite evident that PPIs increase the risk of stroke, arrhythmias, and MACE. More specifically, PPI increases the risk for the first time ischemic stroke and has a dose-response relationship. The greatest risk of MACE is noted in patients taking PPIs for > 6 months. On a molecular level, these cardiovascular effects are mediated by nitric oxide insufficiency, accelerated endothelial aging, endothelial dysfunction, and increased synthesis of chromogranin A.

All authors have no conflict of interest to declare.