Background: trans-radial (snuffbox) approach is a newer approach for coronary catheterization with more advantages as compared with the classic anterior trans-radial approach. However, its routine use is still controversial due to the lack of data.

Objective: This study aims at evaluating the effectiveness and safety of routine distal right radial (snuffbox) as a route for cardiac catheterization.

Materials and Methods: A retrospective chart review of 200 consecutive cardiac catheterization cases performed over 4 months. The distal right radial artery was accessed without ultrasound guidance in all cases, the default access was a distal left radial artery. Information regarding procedure details, success rates and cannulation times were tabulated. Records of patients follow up at 1 to 2-weeks interval post-angiography were recorded.

Results: Distal right radial artery access was successful without ultrasound guidance in 98%, the mean cannulation time was (1.35 ± 0.55 min). No complications were recorded at one to two weeks follow up.

One of the major advancements in the Scientology of endovascular catheterization is the migration of access site from femoral to radial artery, currently is being recommended as class 1A for coronary catheterization for most cases [1]. Many studies have shown higher safety profiles as compared to femoral artery access mainly through decreasing vascular complications [2, 3]. While the radial artery as an access site for cardiac catheterization is getting more popular with wider acceptance, everybody recognizes that itself is not without limitations, among these are the learning curve for its mastering and the vascular complications mainly in form of radial artery occlusion preventing the use of same access site for repeated future procedures, and more importantly depriving the patient of using this artery has there been a need for a conduit [4-5].

Despite the many improvements that took place in handling radial artery access pre catheterization using friendlier introducing sheaths to during procedure using enough doses of heparin and vasodilators to post-procedure with better handling of sheath removal and hemostasis, still radial artery occlusion (RAO) remains the Achilles tendon of its use [6].

Over the last two years, it has been proposed and tried the principle of using a distal radial artery (DRA) or snuffbox approach for cardiac catheterization, again with limited acceptance secondary to the steeper learning curve and worries about vascular and nerve complications. Currently, many endovascular specialists adopted the use of anterior right radial artery for most catheterization procedures and left distal radial artery once failed the anterior right radial artery access or if there is LIMA graft, with a recommendation of performing the access under vascular ultrasound guidance [7-8].

In this retrospective chart review study of routine use of right and left DRA access for all comers for cardiac catheterization regardless of their diagnosis with the purpose of showing applicability, effectiveness, and safety of this approach.

Retrospective chart review of 200 consecutive patients who underwent cardiac catheterization over 4 months period between February and June 2018 performed by a single radial operator in a tertiary hospital were included in this chart review study (table1). Distal Radial artery access was performed routinely by this operator without vascular ultrasound guidance, Seldinger Technique was used, and Allen’s test was not performed. 6 French Terumo sheath was used (Figure 1). Universal 5000U of IV heparin was used, in case of intervention another 5000 units of IV heparin were used, a cocktail of nitrates and heparin was used to flush the sheath after each catheter exchange post-procedure immediate sheath removal was done using handmade pressure dressing in a gradual decrease of pressure over 2 hours period. Patients left home two hours later in case of only diagnostic procedures versus 1-4 days based on their admitting diagnosis. All patients' records of follow up were noted at 1-2 weeks post-index procedure. Hospital approval of the data review was obtained. 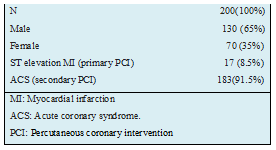 Table 1: Background characteristics of the patients. 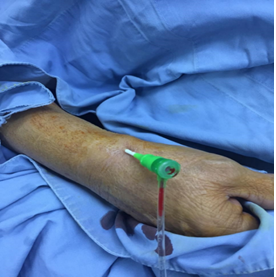 Figure 1: site of sheath insertion in the DRA in the snuffbox area. 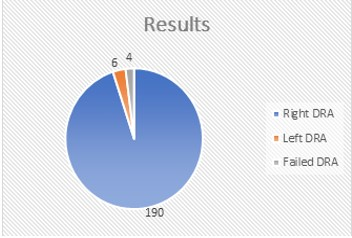 Figure 2: The number of patients who successfully catheterized thought DRA and the number of those who failed.

It might be that radial artery catheterization has revolutionized the catheterization world, it has been proven that for most of the cardiac catheterization cases, this route is very efficacious and superior in safety to the femoral artery catheterization [9]. Cesaro et al. review have shown that the radial artery approach is associated with better outcomes after PCI compared with femoral access, probably through a reduction in vascular complications especially bleeding, and acute kidney injury. The choice of radial vascular access for both percutaneous coronary diagnostic and interventional procedures has proven to be a fascinating strategy with strong evidence that makes it safe and effective in decreasing vascular complication especially bleeding [10].

Unfortunately, with radial artery catheterization, the Achilles tendon remains radial artery occlusion that might happen up to 30% even with all the correct steps pre, during and post radial artery access cautiously have been taken [11-13]. Due to this and the technical challenges it poses in the steep learning curve, many endovascular specialists appear shy of its routine use.

Over the last two years, more and more sporadic data has emerged in the use of DRA catheterization or the snuff box approach (Figure 3). This approach has been proven to be safer and of lesser chances of radial artery occlusion due to the fact it takes place distal to the origin of palmar arch arteries [4, 7]. Also, the time to achieve haemostasis in DRA is shorter than the traditional trans-radial approach due to smaller diameter and is easily achieved by manual compression [14], without affecting the local veins which will not be obstructed, hence decrease the risk of congestion and compartment syndrome [5].

Despite its safety still, it has its inherent problems mainly the greater and steeper learning curve secondary to a smaller-caliber radial artery in the tougher anatomically challenging snuffbox area which might entitle more access time and lesser success rates as compared to the traditional trans-radial artery approach [15]. The worries of harming the nerve supply to the thumb have never been proven. Koutouzis et al study reported a significantly longer time of cannulation (3.9±4.1 min), and Ferdinand et al study showed 11% cannulation failure requiring to cross over to the traditional trans-radial approach [16-18] 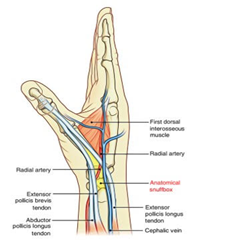 Due to the above, this access site though very attractive, but harder to achieve on a routine basis, so many catheterization specialists remain shy and hesitant of its routine adoption, limiting its use to few cases mainly those who failed anterior right radial artery approach or when using the left radial artery in the presence of ultrasound guidance [19].

Cardiac catheterization using the distal right radial artery routinely and left distal radial as default access can be performed safely without the need for ultrasound, it can be achieved in a very timely fashion in most cases with a high success rate. It has a better safety profile as compared with other routes of access, we stress on the learning curve for this approach that we think it is very doable and ready to be adopted, however, more studies are needed to duplicate results.

Especial thanks for Dr Mohammed Alqadi, Jihad S. Zalloum, and Sadi Abukhalaf for reviewing this article.

No fund was obtained

All data is available in the manuscript