Animal hibernation is a kind of starvation with some fat reserve. During early stage of starvation, gluconeogenesis, fatty acid oxidation and ketogenesis started in the liver which is a comparable condition in patients who are being treated with sodium-glucose cotransporter 2 inhibitors (SGLT2i). SGLT2i might exert a cardioprotective effect by change in cardiac excitation-contraction coupling as seen in hibernating animals, which prevents calcium overload and energy waste in myocardium. Modestly elevated circulating levels of the ketone β-hydroxybutyrate (βOHB) during treatment with SGLT2i causes different beneficial effects on organs and cells, depending on the succinyl-CoA:3-ketoacid CoA transferase (SCOT) level. In the failing heart, SCOT is highly expressed/up-regulated and thus βOHB may be an energy source apart from fat and glucose oxidation in myocardial mitochondria. On the other hand, SCOT is not highly expressed/down-regulated in the kidney and thus βOHB may translocate into nucleus and cause beneficial effects such as inhibition of inflammation, oxidative stress and fibrosis as an endogenous and specific inhibitor of class I histone deacetylases (HDACs) and the NLRP3 inflammasome. SGLT2i exert a direct renoprotective effect with restoration of tubulo-glomerular feedback and improving renal proximal tubule oxygenation. Other than that, various beneficial effects of SGLT2i might be caused by well-orchestrated pattern of systemic metabolic change against glucose starvation induced by SGLT2i.

Animals, including humans, invoke a comprehensive program of hormonal and metabolic adaptations that enable them to withstand prolonged periods of starvation. The dominant metabolic processes during starvation are the mobilization of triacylglycerols in adipose tissue and gluconeogenesis by the liver. The brain is only capable of using glucose or ketone bodies as respiratory fuel. To spare glucose use and thus spare muscle protein most tissues of the body utilize fat-derived fuels fatty acid and ketone bodies. As starvation progress ketone bodies also become the major fuel of the brain, again reducing the need for glucose. This well-orchestrated pattern of metabolism allows a consistent fuel supply to the brain and other tissues during prolonged starvation [1]. After the start of fasting, gluconeogenesis starts within as early as 6 hours and then β-hydroxybutyrate (βOHB) production begins within 16 hours and significantly increases within 28 hours. This early metabolic changes may be comparable to the condition in patients who are being treated with SGLT2 inhibitors (Figures 1a, 1b).

Figure1a: Balance between starvation and gluttony.

Nutritional condition leans to starvation side during treatment with SGLT2 inhibitors. 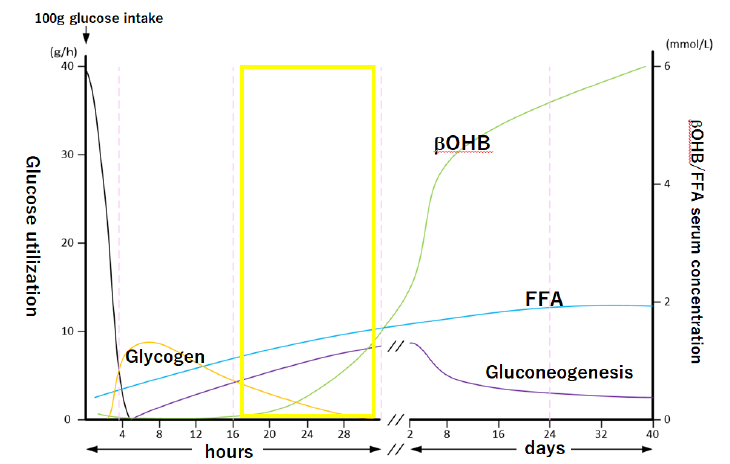 Figure 1b: Metabolic changes during abstinence from food.

After 100 g glucose intake, a man weighing 70 kg starves himself for 40 days. Area surrounded by yellow line may be comparable to the condition in patients who are being treated with SGLT2 inhibitors. βOHB, β-hydroxybutyrate: FFA, free fatty acid. (This graph is a modification of Figure 1 by Matsumoto and Sakai, Exp Med 34, 2016).

The reported glucagonotropic effect of SGLT2i may reflect a compensatory mechanism caused by declining blood glucose or glucosuria and /or could be a direct effect of the SGLT2i on the pancreatic α-cells [2]. The main target organ of glucagon is the liver. Glucagon stimulates glycogen breakdown and inhibits glycogen synthesis by triggering the cyclic AMP cascade leading to the phosphorylation and activation of phosphorylase and the inhibition of glycogen synthase. Glucagon also inhibits fatty acid synthesis by diminishing the production of pyruvate and by lowering the activity of acetyl CoA carboxylase by maintaining it in an unphosphorylated state. In addition, glucagon stimulates gluconeogenesis in the liver and blocks glycolysis by lowering the levels of Fructose 2, 6-bisphosphate. Under these conditions, fatty acid oxidation and ketogenesis are promoted in the liver.

Cardiovascular outcome trials have provided evidence that SGLT2i treatment is associated with remarkably favorable cardiovascular outcomes. Avogaro et al. hypothesize that the beneficial cardioprotective effects of SGLT2i may be related to their ability to switch cell life programming from a defense to a dormancy state which has strong analogy with animal hibernation where fuel is stored, metabolic rate is suppressed, and insulin secretion is reduced [3].

Hibernation is a kind of starvation with some fat reserve. Indeed, it has been shown how black bears maintain energy homeostasis during hibernation, which revealed up-regulation of gluconeogenesis-related genes in the liver, and down-regulation of glycolysis- and de novo lipogenesis-related genes in the liver, skeletal muscle, and adipose tissues during hibernation, compared to the active period [4].

I found an interesting report that some characteristics of cardiac excitation-contraction coupling are markedly changed in myocardium of hibernating animals (asian chipmunks) [5]. The contraction of the cardiac muscle depends mainly on intracellularly derived calcium in hibernating animals, whereas in myocardium of nonhibernating animals calcium influx across cell membranes makes a greater contribution to the activation of contraction (Figure 2). In this story, hibernating heart contracts mainly depending upon intracellular calcium storage in sarcoplasmic reticulum without calcium influx across cell membranes which prevents calcium overload state that has been implicated in the mitochondrial calcium accumulation and destroy. This also makes unnecessary for cardiac muscle to pomp out calcium against overwhelming amount of calcium outside which causes energy waste. If this is an adaptive change to glucose starvation during hibernation, SGLT2i might exert a similar cardioprotective effect by change in cardiac excitation-contraction coupling. 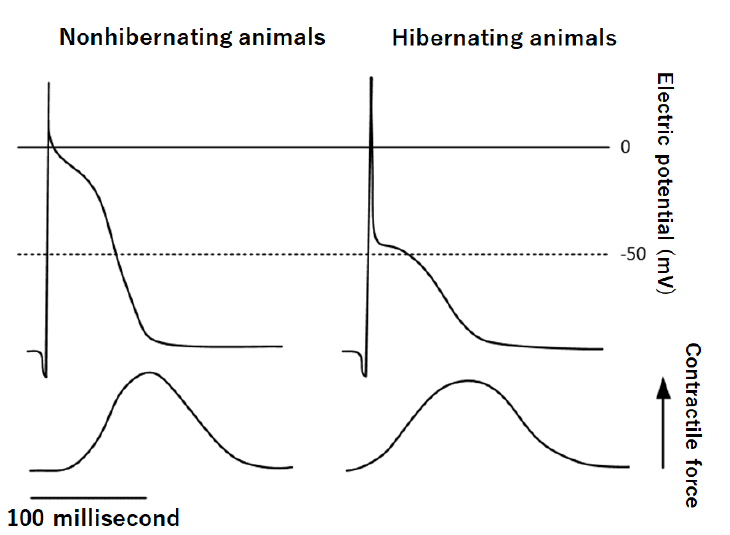 Action potential was composed from two phases, the initial phase followed by plateau phase. The plateau phase which reflects calcium influx across cell membrane is shaved off in hibernating animal.

3. Ketone Body as a Starvation Signal

Ketone bodies are important vectors of energy transfer. Ketogenesis primarily occurs in the liver due to the use of excess acetyl-CoA that is mainly derived from accelerated fatty acid β-oxidation. The relative capacity for tissues to utilize ketone bodies for energy is thought to be determined by their levels of ketolytic enzymes including succinyl-CoA:3-ketoacid CoA transferase (SCOT) [6-8].

Modestly elevated circulating levels of the ketone β-hydroxybutyrate (βOHB) during treatment with SGLT2i causes different beneficial effects on organs and cells, depending on the succinyl-CoA:3-ketoacid CoA transferase (SCOT) level. In the failing heart, SCOT is highly expressed/up-regulated and thus βOHB may be an energy source apart from fat and glucose oxidation [7].

It is well known that the failing heart reprograms to a lower capacity for oxidizing fatty acids-the chief fuel for the normal heart. Fatty acid oxidation is impaired partly because of decreased mitochondrial carnitine-shuttle-mediated uptake, which in turn leads to increased circulating levels of acylcarnitines and decreased fatty acid β-oxidation [9, 10]. Several lines of evidence, including the cardiomyopathy phenotype of human genetic defects in mitochondrial β-oxidation [11], suggest that reduced capacity for myocardial fatty acid utilization contributes to a vicious cycle of energy starvation and pathological remodeling.

Increased glycolysis in the presence of insufficient glucose oxidation cannot compensate for the decreased energy supply in the chronically falling myocardium. A functional mitochondrial pyruvate carrier (MPC) is critical for cellular homeostasis, because it is required for pyruvate import into mitochondria, thereby supplying substrate through acethyl-CoA for the TCA cycle. MCP suppression also occurs in the failing heart, which may make it impossible to compensate reduced capacity for myocardial fatty acid utilization [12]. Under such conditions, ketone bodies serve as an alternative energy source to the failing heart (Figure 3). 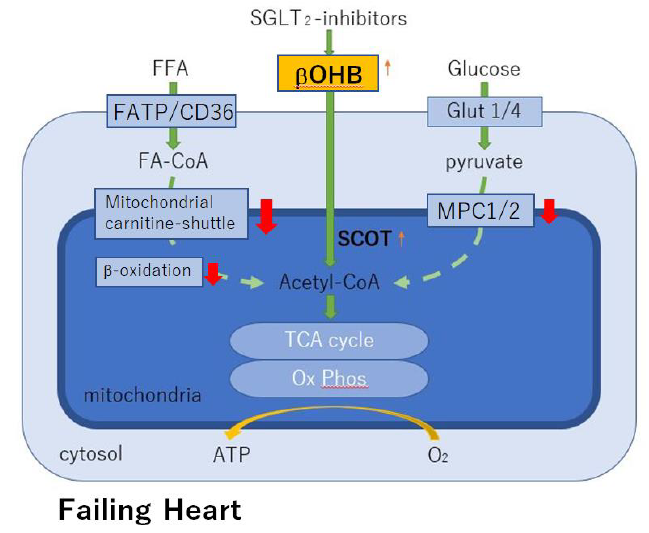 β-hydroxybutyrate (βOHB) is avidly used as an alternative fuel in the failing heart. High level of myocardial succinyl-CoA:3-oxoacid CoA transferase (SCOT) indicates a preference for utilization of βOHB for energy in the failing heart of patients who are being treated with SGLT2 inhibitors. MPC, mitochondrial pyruvate carrier; Ox Phos, oxidative phosphorylation.

First of all, SGLT2i restore tubulo-glomerular feedback and improve renal proximal tubule oxygenation as direct beneficial effects on kidney. SCOT is not highly expressed/down-regulated in the kidney and thus βOHB may cause different beneficial effects, rather than acting as an alternative energy source in the setting of chronic kidney disease (CKD) [8]. βOHB, an endogenous and specific inhibitor of class I histone deacetylases (HDACs) and the NLRP3 inflammasome, could lead to inhibition of inflammation, oxidative stress and fibrosis [8, 13] during treatment with SGLT2i (Figure 4). In addition, starvation signals caused by SGLT2i decrease mechanistic target of rapamycin complex 1 (mTORC1) activity which leads to promoting autophagy to influence glomerular disease susceptibility and maintains podocyte homeostasis [14, 15].

Nuclear translocation of β-hydroxybutyrate (βOHB), an endogenous and specific inhibitor of class I histone deacetylases (HDACs) and NLRP3 inflammasome, in kidney because of decreased βOHB utilization in mitochondria due to down-regulation of succinyl-CoA:3-oxoacid CoA transferase (SCOT) induces anti-oxidant, anti-inflammatory, and anti-fibrotic effects during treatment with SGLT2 inhibitors.

SGLT2i exert a direct renoprotective effect that is dependent of their inhibitory action on glucose reabsorption in the proximal renal tube: restoration of tubulo-glomerular feedback and improving renal proximal tubule oxygenation. Other than that, various beneficial effects of SGLT2i including the risk reduction of cardiovascular death and hospitalization for heart failure in both heart failure with reduced ejection fraction (HFrEF) and with preserved ejection fraction (HFpEF) might be caused by well-orchestrated pattern of systemic metabolic change against glucose starvation induced by SGLT2i.

The author thanks Dr. Masahiro Ueno (Information Technology Department, Ibaraki Seinan Medical Center Hospital) for the support to make the figures in this manuscript

The author declares that he has no competing interests

No funding was received for this work