Right Ventricular Infarction Secondary to Extensive Bilateral Pulmonary Emboli in the Setting of Negative D-dimer: A Case Report and Mini-Review

Introduction: Acute pulmonary embolism (PE) is one of the presentations of venous thromboembolism (VTE) which can be potentially life-threatening by causing cardiovascular collapse. Commonly, a negative D-dimer assay is accepted for ruling out PE; however, there have been cases such as this case that challenge current practice.

Conclusions: This case report is a rare case of initial negative D-dimer in the setting of extensive bilateral PE which caused right ventricular infarction. The literature review demonstrated only a few cases of PE in the setting of negative D-dimer. This unusual clinical scenario presents a diagnostic challenge in patients with low or moderate clinical probability for PE; even some current practices indicate stopping further diagnostic work-up if the D-dimer is negative in these groups. To mitigate negative outcomes in patients with low or moderate clinical probability, other strategies have been proposed to make an early diagnosis of PE such as triple combination modalities; however, they require additional analysis and consideration before they can be routinely recommended.

Acute Pulmonary Embolism (PE) is a potentially life-threatening presentation of Venous Thromboembolism (VTE). One of the mainstays in the diagnosis of PE is using the high-sensitivity D-dimer assay. Commonly, a negative D-dimer assay is accepted for ruling out PE; however, there have been cases such as this case that challenge the current practice. Our patient is an interesting, rare case of extensive bilateral PE with right ventricular infarction in light of intermediate clinical probability for PE and initially negative D-dimer assay which turned positive 5 days after the diagnosis of PE. Given that acute extensive PE can cause drastically poor outcomes by cardiovascular collapse, early diagnosis is very important to reduce morbidity and mortality, so current new studies are focusing on different diagnostic modalities to avoid misdiagnosis of PE in low or moderated clinical probability patients with negative D-dimer.

An 83-year-old female presented to the emergency room with acute onset shortness of breath without chest pain for 3 hours. She denied leg swelling and previous episode (s) of deep venous thrombosis (DVT), immobilization, trauma, and long-distance trip. Past medical history was significant for hypertension and peripheral vascular disease.

On examination, the oxygen saturation was 80–89% while breathing ambient air. The patient was tachycardic with a heart rate of 104 beats per minute at rest; otherwise, the physical exam was unremarkable. Initial lab tests revealed elevated levels of pro-B-type natriuretic peptide and troponin-T along with a normal level of the D-dimer assay tested via the quantitative immunoturbidimetric method. Electrocardiogram showed sinus tachycardia with premature atrial complexes and T-wave inversions in the anterolateral leads (Figure 1).

Chest X-ray findings were within normal limits. Transthoracic echocardiogram reported normal left ventricular ejection fraction at 55%, mild right ventricular dilation, and hypokinesia, with right ventricular systolic pressure of 39.7 mmHg. Although the D-dimer had been reported negative, because of the presenting symptom (shortness of breath), and paraclinical findings, PE workup was considered. Venous duplex ultrasound showed no evidence of acute DVT in the lower extremities, however, chest CT angiogram was consistent with extensive bilateral PE in the main pulmonary arteries extending into the segmental and subsegmental arteries (Figures 2, 3a, and 3b). It is noteworthy that repeated D-dimer tests became positive 5 days after the diagnosis of PE using the same primary quantitative method. I­­­­­­­nitially, the patient was managed with the non-ST elevation myocardial infarction protocol, including the therapeutic dose of anticoagulation and also oxygen therapy via nasal cannula for hypoxia. Upon confirming the PE, the treatment plan was refocused on right ventricle myocardial infarction in the setting of PE with the goal of optimizing right ventricular preload. Due to the patient’s age, medical background, and discussions with the patient and her family, the patient did not qualify for thrombolytic therapy either systemic or catheter-directed. Following the improvement of difficulty breathing and oxygen saturation, the patient was discharged on the therapeutic dose of direct oral anticoagulation (DOAC) along with scheduled follow-up appointments with hematologist/oncologist and cardiologist for subsequent evaluations. 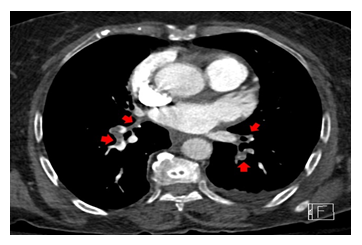 For the diagnosis of PE, different diagnostic modalities are being used including clinical probability, D-dimer assay, partial pressure of end-tidal CO2 (PetCO2), venous ultrasound of the lower extremities, ventilation-perfusion lung scan, and chest CT angiography [1]. Wells’ Criteria is one of the most commonly used tools for predicting the likelihood of PE based on clinical evaluation. According to Wells’ study, the chance of PE in patients with low (0-1), moderate (2-6), and high (>6) Wells’ scores is 1.3%, 16.2%, and 37.5% respectively. In addition, Wells' study shows that using the combined strategy of a clinical score with D-dimer has a negative predictive value of 99.5% (confidence interval (CI), 99.1%–100%) to diagnose PE [2]. The D-dimer assay is one of the most commonly used laboratory tests to rule out PE which is a protein fragment from the clot. Monoclonal antibodies to certain locations of the D-dimer protein, depending on the assay, have been developed and are added to the sample to bound to D-dimer. The D-dimer assay, by measuring these monoclonal antibodies, is a highly sensitive test in ruling out the PE, such that, the 2018 guidelines of the American Society of Hematology reported the sensitivity of D-dimer for diagnosis of PE as 97% (95% CI, 0.96%–0.98%) [3,4]. Additionally, D-dimer antigen levels are elevated in the acute phase of clot formation, and the half-life of these antigens is 4 to 6 hours. Continued fibrinolysis that occurs in PE causes the D-dimer level to remain elevated for about 7 days [3], so the assay could be falsely negative if the specimen is collected very early or later than 7 days after clot formation [5]. Since it is difficult to determine exactly when clot formation occurred, there is the potential to have a falsely negative D-dimer result and a misdiagnosis.

Due to the discrepancies between current recommendations and actual findings in practice, we suggest that the decision for the next step in patients with low or moderate clinical probability and negative D-dimer is multifactorial, and to improve the diagnostic yield of PE in these groups of patients clinicians need to consider new diagnostic strategies such as triple combination workup instead of the double combination of clinical probability and D-dimer assay. The triple combination workup proposed by Dhananjaya M. et al consisted of clinical probability, D-dimer, and CT pulmonary angiography. However, Youssf et al. state that the triple combination of clinical probability, D-dimer, and PetCO2 ≤28 mmHg could also increase the diagnostic accuracy of PE diagnosis [1,9]. This improvement can be explained by the fact that PE decreases alveolar CO2 content by obstructing the normal perfusion in the involved area of the lung. Therefore, the ventilation-perfusion ratio will increase and will create more alveolar dead space. Gas exhaled from this under-perfused lung contains low CO2 which leads to lower PetCO2 [9,11]. It is yet unclear which of these triple combination strategies is more practical, though Youssf et al.’s inclusion of PetCO2, which is a less-invasive test, may be preferred. Nonetheless, considering triple strategies in the diagnosis of PE in patients with low or moderate clinical probability requires revision to current common principles, and using these new combined modalities in practice which could be a valuable step in preventing potentially irreversible consequences from misdiagnosis of PE.

The patient’s identity is not disclosed anywhere. IRB or Ethics committee approval does not apply to the case report based on the authors’ institution. Written informed consent was obtained from the patient to participate in this case report.

The patient has provided informed consent for the publication of the case. A copy of the written consent is available for review by the Editor-in-Chief of this journal.

Conception or design of the work and data collection: FY; drafting the article and revision: FY, VB; editing and conceptualization: BZ, CH, RA; All authors have read and approved the final manuscript.