Seasonal Variability in The Implantations of Cardiovascular Electronic Devices

Objective: We assessed whether there were seasonal variations in CIED implantations.

Methods: In this serial cross-sectional study using Japan's National Health Insurance Data, we identified new implants of cardiac pacemakers (PMs, n=402,676) between 2006 and 2016, including implantable cardioverter-defibrillators (ICDs, n=29,330) and cardiac resynchronization therapy with defibrillators (CRT-Ds, n=17,907) between 2009 and 2016. We examined the seasonality in the number of implantations, and whether they depended on the geographical regions (north, central, and south) or number of procedures by prefecture (above and below the mean). A seasonaltrend decomposition procedure based on a locally weighted regression was used to assess the seasonal, monthly or quarterly variations. In addition, the seasonal sinusoidal oscillation in the detrended variations was evaluated using a least-squares cosine-curve fitting algorithm.

Conclusion: There were significant seasonal variations in PM and CRT-D implantations with a peak occurring in the summer and trough in the winter, but not for ICDs.

Cardiovascular implantable electronic devices (CIEDs) have had a great impact on the treatment of patients with arrhythmias and heart failure. The number of CIEDs being implanted in throughout the world has continues to increase [1,2]. Many yearly statistics on the CIEDs implantations have been reported, but little information is available as to seasonal variations. The incidence of cardiovascular events is known to have seasonal variations in the regions subjects to four distinct seasons [3,4]. For instance, acute coronary syndrome [5-7], sudden cardiac death [8-10], and heart failure [11] have been shown to have peaks in the winter and troughs in the summer. A seasonal variation has also been observed in arrhythmias. Atrial fibrillation typically occurs in the autumn-winter season and troughs in the summer [12,13]. Ventricular arrhythmias also present a peak in the winter [14], but some studies have reported an additional peak in the summer months [15-17]. Very few studies, however, have reported a seasonal distribution in the bradyarrhythmia onset [18, 19].

Although scant attention is paid in expert clinical guidelines, the study of the seasonality in cardiac diseases is important for a variety of reasons both at individual and public-health policy levels. The aim of this study was to examine the seasonal variation in the volume of implantations using the Japanese National Health Insurance Data registry of newly implanted CIEDs over a 7-year period, which totaled approximately 450,000 devices [2].

We used the National Health Insurance Data collected by the Japan Arrhythmia Device Industry Association [2]. They prospectively compiled the number of CIED implantations by month between 2006 and 2016. The number of implantations by prefecture was counted every quarter from 2012 to 2016. We analyzed the pacemaker (PM) implantation data between 2006 and 2016, and implantable cardioverter-defibrillators (ICDs), cardiac resynchronization therapy (CRT) devices with defibrillation capability (CRT-Ds) implantation data between 2009 and 2016. We excluded the ICD and CRT-D data between before 2009, because the number of ICDs and CRT-Ds were not registered separately until 2009. We did not analyze the CRT devices with pacing capability devices because of the small number of implants (n=6,902) between 2009 and 2016. The National Health Insurance Data includes the number and type of models, but does not include any information on the patient demographics such as the age, sex, race, underlying diseases, indication for the implantation, medications, or outcome. The institutional review board approved this study (HM17-475) and investigation was performed according to the ethical standards of the Helsinki Declaration. The database was provided with deidentified patient information and written informed consent was waived due to the study’s design.

We examined the possibility that the seasonal fluctuations in CIED implantations were influenced by the mean temperature of the geographic area or by the number of procedures in each prefecture. The geographic areas of Japan were divided into 3 areas according to the annual average temperature: north (Tohoku and Hokkaido, 12 ?), central (Kanto, Tokai and Kinki, 16 ?), and south (Chugoku, Shikoku, and Kyushu, 17 ?) [20]. Further, Japan's 47 prefectures were categorized into two groups depending on whether the number of total CIED implantations was above (10 prefectures) or below (37 prefectures) the national average.

We used an χ2-test for the goodness of the fit to identify nonuniform distributions. To identify periodic patterns, we used the so called seasonal-trend decomposition procedure based on a LOcally weighted regrESSion (loess) (STL) developed by Cleveland et al. [21]. This is an additive time series decomposition technique that is robust to outliers. The number of device implantations N(t) was decomposed into three components:

where t is time in units of years and increments monthly. T(t) is the trend component that captures long term changes such as an increase or decrease in the baseline. S(t) is the seasonal component. R(t) is a random-error noise component that reflects what remains after the trend and seasonal components are subtracted. Loess is a non-parametric regression method that combines a linear least squares regression with a non-linear regression. It is applied to localized subsets of data. In the STL, periodic components are detected by repeating smoothing by a Loess while changing the width of the window. In addition, to evaluate a seasonal sinusoidal pattern, a least-squares cosine-curve fitting was applied to the detrended variation N(t) - S(t). All analyses were performed using the R statistical software environment. A p-value <0.05 was considered statistically significant.

The temporal trends and monthly variations in the CIED implantations are shown in Figure 1 for PMs (left column), ICDs (middle column), and CRT-Ds (right column). The top row shows the number of device implantations by month and the calculated trend. There was a total of 402,676 PM implantations between 2006 and 2016. The number of PM implantations rose from 40,318 cases in 2006 to 44,700 cases in 2016. A total of 29,330 ICDs and 17,907 CRT-Ds were implanted between 2009 and 2016. The results of the STL for the three types of devices are shown in the second through bottom rows. The bottom row extracts one annual cycle and shows how the implantation numbers varied by month. 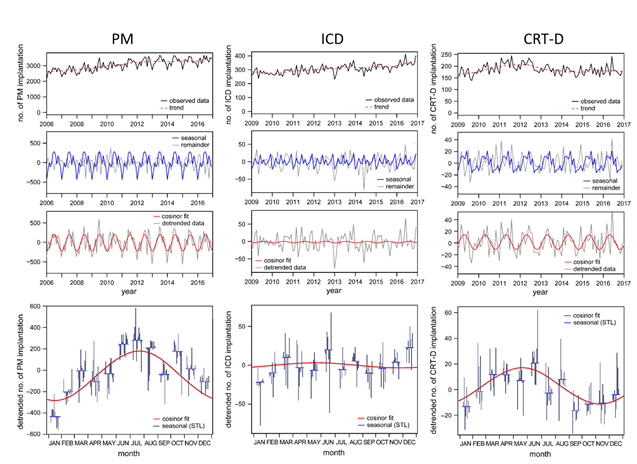 Regional variations in the CIED implantations

We next examined whether the CIED implantations fluctuated by month depending on the geographic regions between 2012 and 2016. We found a significant seasonal variation in the implantation of PMs and CRT-Ds irrespective of the geographical region (S2-S4 Figures). In the ICDs, however, no significant seasonal variation was found except for in the southern region of Japan.

Number of CIED implantations by prefecture

In this large database of contemporary implantation trends of CIEDs in Japan, we found there were significant seasonal variations in the number of newly implanted PMs and CRT-Ds, peaked in the summer months and troughed in winter. The ICD implantation did not exhibit seasonality, but it had a peak in December. These observations were not influenced by the geographic region or number of implantations by prefecture. It is helpful to know the seasonality of CIED implantations for example for hospitals to be adequately staffed and provide adequate access to operation. It is also useful for device companies, so they can plan their stock management accordingly.

Our data showed a significant seasonal variation in PM implantations with a peak in July, but there was little evidence that symptomatic bradyarrhythmia requiring PM implantation was likely to occur in the summer season under the influence of metrological elements. In an early study from Taiwan, Chen et al. [19] reported that a peak of PM implantations was observed between October and December, both for sinus node dysfunction and atrioventricular block. In a single hospital study, Liu et al. [18] showed that PM implantations in Taiwan due to atrioventricular block had a peak in the spring but no seasonality was observed for that due to sinus node dysfunction. They also found that a sudden drop in the outside air temperature of greater than 11 °C within 30 days prior to admission was associated with a higher number of patients with atrioventricular block. In a recent study, Shiue et al. reported a winter predominance of atrioventricular block in Germany [22]. Our study showed in contrast, that there were significant peaks in PM implantations in the summer months with a trough in the winter. It is difficult to postulate why our results differ so much from the previous studies, but our sample size was significantly larger and was true over climactically different geographic regions.

We found a significant seasonal variation in CRT-D implants, but not in ICDs. The ICD implantations exhibited a single peak in December. We expected that no significant seasonality for defibrillator implantations existed because majority of the patients receiving ICDs for primary prevention for sudden death. But for secondary prevention, defibrillators are expected to be implanted more in the winter because ventricular arrhythmias tend to peak in the winter months [9]. Previous studies showed that, differing from the ischemic heart disease population, patients with arrhythmogenic right ventricular cardiomyopathy [17] and Brugada syndrome, [16] tended to develop ventricular arrhythmias in the summer months. The secondary prevention patients with such diseases may receive ICDs in summer season.

Multiple mechanisms are likely to underlie CIEDs seasonality, resulting from complex interactions among physiological, meteorological, and social aspect. The older individuals, those with cardiovascular diseases, and those with lower cardiorespiratory fitness are probably less likely to adapt to meteorological changes, as well as by exposure to air pollution. Although definitive conclusions have not been reached, these meteorological factors have been suggested to cause ventricular [23] or supraventricular arrhythmias [24,25] modifying the autonomic tone, repolarization process, and circulatory load [26]. Also, oxidative stress or myocardial ischemia may provoke arrhythmic substrate. Mutual interrelations among the above-mentioned physiological and meteorological factors may be associated with arrhythmias requiring device implantations. The remaining mechanism of CIEDs seasonality is social, in which less urgent procedures would likely be scheduled around the convenience of the patient and family members supporting the patient. In this study, however, we do not have any information on this point.

The study of the seasonality is important for a variety of reasons. For one, it could lead to the identification of triggers of cardiac events that in turn elucidate mechanisms of cardiac disease. Two, identification of triggers may help with prevention, both on an individual patient level and at a public health policy level. Three, peaks in hospitalizations and procedures may exist that hospital administrators or device manufacturers may be unaware of. Preparations for the peak season might include staffing considerations, and scheduling of elective procedures for off peak seasons.

Although this analysis represents the largest study of CIED implantations to date, there are several limitations. The National Health Insurance Data is limited to collecting the absolute number of device implantations. The patient characteristics and indications for CIEDs implants were not ascertained. We therefore expect that many confounding factors may be linked to the seasonal variation in the CIED implantations.

In this large data set of CIED implantations, we identified a substantial seasonal variation in the CIED implantations across Japan. Although the mechanisms and factors underlying this phenomenon remain unclear, understanding the monthly variations in CIED implantations is important when seeking to implement effective public health measures. Further research on the CIEDs seasonality in various countries is warranted.

Supplementary information is available at https://www.fortunejournals.com/supply/ccm060.pdf