Single versus Dual-Chamber Pacing in a Sub-Saharan African Heart Center: Characteristics and Prognosis

Context: The pacemaker since the 2000s has seen technical improvements. In Sub-Saharan Africa, we often implant single-ventricular chamber pacemakers because of patients' limited financial resources.

Objective: This work sought to compare our patients' characteristics and prognosis with single-chamber ventricular pacing with those with dual-chamber pacing.

Methods: We conducted a retrospective study of patients implanted with pacemakers between 2006 and 2016 at Abidjan Heart Center in Ivory Coast. We compared demographic, clinical, and follow-up data of patients with single versus dual-chamber pacemakers. The endpoint was all-causes of death.

Results: Of the 283 patients (67.3 ± 12.6 years; 49.1% of males) selected for the study, 189 (66,8%) had a single chamber pacemaker. Patients with this type of pacemaker were older, with more often syncopes and atrial fibrillation before implantation. Sex and underlying disease were comparable in the two groups. During follow-up, early and late complications were not statistically different. At the end of the follow-up period (median:3.67 years, IQ [2.07; 6.10], 73 patients (25.8%) were dead. In univariate Cox model analysis, a single-chamber pacemaker was associated with risk of death (RR =1.974; 95% CI [1.132,3.44], p = 0.017), as well as age, heart failure, atrial fibrillation and, left ventricular ejection fraction <0.40. In multivariate analysis, only age was a factor of poor prognosis.

In sub-Saharan Africa, pacemaker therapy is still in the embryonic stage [1, 2]. A Pan-African Society of Cardiology (PASCAR) survey about 31 African countries reported that 30% of African countries had limited access to pacemaker insertion [3]. Eight of the 31 countries surveyed (26%) did not have access to pacemaker implantation. So, this practice is limited by insufficient technical, human resources, and patients' incomes. Thus, the dual-chamber pacemaker may appear to be significantly much more expensive than the single-chamber pacemaker. So in practice, we often suggest that patients choose the pacing mode according to their financial capabilities. Randomized studies from the early 2000s had compared dual-chamber (atrioventricular) and single chamber (ventricular) pacing mode [4-6]. Although the dual-chamber pacing had appeared to be more beneficial in terms of quality of life, this mode had not demonstrated superiority in morbidity and mortality. Current guidelines do not exclude the choice of single-ventricular pacing, particularly in cases of atrioventricular block [7, 8]. But several experts have found these results questionable [9, 10]. In practice, the use of single-ventricular pacemakers in developed countries has significantly decreased in favor of dual-chamber pacemakers [11, 12]. Besides, numerous cardiac pacing concepts and pacemaker technology have evolved [13, 14]. In this context, this work sought to compare our patients' characteristics and prognosis with single-chamber ventricular pacing with those with dual-chamber pacing.

We conducted a non-randomized retrospective cohort study of patients implanted with pacemakers between 2006 and 2016 at Abidjan Heart Center in Ivory Coast. Patients included in our study had a typical indication for cardiac pacing (bradycardia). For this reason, we inserted a single or a dual-chamber pacemaker according to the underlying disease and financial capabilities of patients. We excluded for this study all patients who received an implantable cardiac defibrillator, a pacemaker for cardiac resynchronisation therapy, had the right ventricular lead positioned outside the apex, or have had a cardiac surgery three months before or in the years following the pacemaker's implantation.

At the time of the first pacemaker implantation, we systematically recorded

After discharge, patients had a visit the first month, the third month, and then every six months. At the third month, we recorded the NYHA stage, early complications (i.e., those that occurred before three months), pacemakers parameters, and possible pacemaker dependency. The deadline for follow-up was December 31, 2017.We obtained data on late complications (those that occurred after the follow-up at three months), rehospitalizations, and deaths. If these data were not available in patients' files, we collected these data by telephone from the patients (with their prior agreement) or their referring physicians. We defined partial pacemaker dependency in patients with sinus dysfunction whose percentage of atrial stimulation was above 80% at a frequency programmed at a minimum frequency of 60 bpm and in patients with an atrioventricular block if the rate of ventricular stimulation was above 80% programmed at a minimum frequency of 60 bpm. Total pacemaker dependency was defined if, in addition to partial pacemaker dependency, spontaneous activity was absent at single atrial-chamber pacing (AAI) at 30 bpm (in sinus dysfunction) or single-ventricular chamber pacing (VVI) 30 bpm (in atrioventricular block) for 30 seconds.

Because of the lack of possibility to determine the exact cause of death of most patients on the data obtained, death for all-cause was established as the endpoint.

We presented the characteristics of the study population and the cardiac pacing using descriptive statistics. We carried out the comparisons between the groups for the descriptive variables with the chi-square test, and, if not possible, Fisher's exact test for the categorical variables. The continuous variables were compared using the Student's t-test or the Mann-Whitney U test, according to their characteristics. A univariate Cox proportional hazards model was used to identify the independent predictors of all-cause death from the variables usually known as such. Variables with a p-value < 0.05 were included in the multivariable Cox model. The final models for predicting each study outcome were determined using all the variables from the initial model. The bootstrap method with 1000 iterations was used to validate the final model. The cumulative incidence of deaths was generated using the Kaplan-Meier method and compared using the log-rank test between the two groups studied and according to the type of pacemaker (single versus dual-chamber pacemaker). All the analysis were done in intention-to-treat. A value of p < 0.05 was considered statistically significant. The data were analyzed using SPSS software version 23.

The Abidjan Heart Institute ethics committee approved the study. The data collected were analyzed under the data protection laws for individuals, following ethical principles according to the Declaration of Helsinki.

During the period, among 325 patients implanted, 283 patients met the selection criteria. The patients' mean age was 67.3 ± 12.6 years; 49.1% were male (Table1). The main symptoms were syncope (38.5%) and dizziness (30.5%). Eighty-five patients (30%) had underlying heart disease. The primary indication for pacing was a complete atrioventricular (AV) block (83.3%). One hundred and eighty-nine patients (66.8%) received a single chamber ventricular pacemaker, and 94 (33.2%) a dual-chamber pacemaker. After implantation, 16 patients (5.7%) experienced early complications and 15 (5.3%) late complications (Table 2). After discharge, 257 patients (91.2%) had their pacemaker checked at three months. Six patients died before three months, and 20 others were not present at the visit on this date. The tests revealed frequent pacemaker dependency (76%).

3.2 Comparison of patients with single versus dual-chamber pacemaker (Table 1 & 2)

Table 1: Baseline characteristics of all patients and comparison between patients with a single-ventricular pacemaker (VVI) and a dual-chamber pacemaker (DDD).

Table 2: Data on the patients’ follow-up. Comparison between patients with a single-ventricular pacemaker (VVI) and a dual-chamber pacemaker (DDD).

Table 3: Univariate and Multivariate analysis of prognostic factors of death. 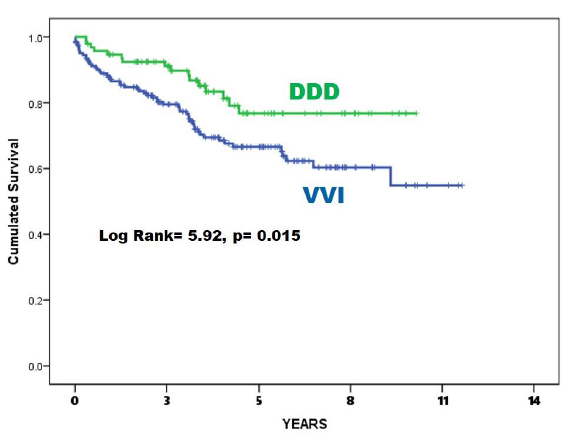 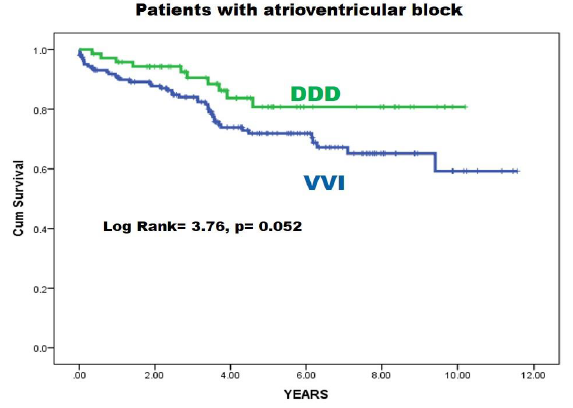 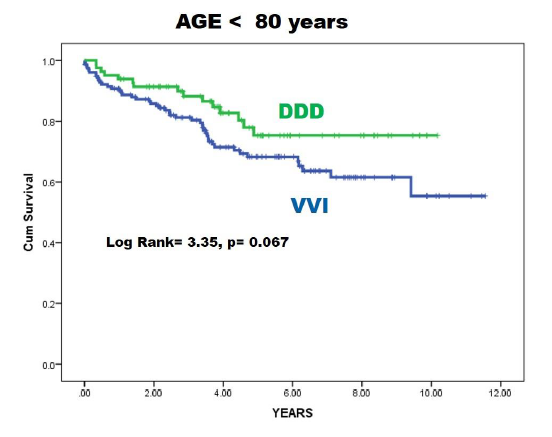 In our cohort of patients from sub-Saharan Africa, patients with single-chamber pacing had a more severe prognosis than patients with dual-chamber pacing. But this higher mortality was linked to older age and a more significant presence of atrial fibrillation in this group. The characteristics of patients receiving cardiac stimulation in sub-Saharan Africa differ from those in developed countries: they are much fewer, younger, and have a more severe clinical status [1, 15, 16]. Indeed, there is insufficient infrastructure and a lack of specialists practicing pacemaker therapy [2, 17]. It doesn't even exist in some countries. Besides, the cost appears excessive for the populations [2]. So much so that, among the patients who indicate cardiac pacing, very few benefit from it. These are generally the youngest patients (still in activity, therefore able to cover the pacemaker's cost) and the most serious (those who have frequent syncopes or pre-syncopes). In our cohort, we have a large number of patients who had syncopes or pre-syncopes (53.3%), a large number of patients with pacemaker dependency, and very few presenting with sinus node dysfunction.

In our context, patients prefer single-ventricular pacemakers because of their lowest cost. Although being the third choice in an atrioventricular block, it is easier to implant in the ESC guidelines and is associated with fewer complications than the DDD pacemaker [8, 18]. In our work, we have twice more difficulties with DDD, but this difference is not significant. But in 2020, the advantages of the dual-chamber pacemaker are indisputable [19]: it avoids the pacemaker syndrome, which may require reoperation. It allows, with its memories, to diagnose with precision paroxysmal ventricular and supraventricular arrhythmias. It avoids the unnecessary pacing of the right ventricle, which can be deleterious in certain situations with the news algorithm for preserving ventricular pacing. It decreases the risk of atrial fibrillation [4-6]. When we compare the two groups of patients, we realize that the single-chamber pacemaker was (unintentionally) chosen for the most severe cases: older subjects with a greater syncope and atrial fibrillation frequency. These three characteristics may explain the higher mortality in this group.

Older subjects naturally have a poorer prognosis than younger subjects. They also have a more significant number of comorbidities. Finally, the dual-chamber pacing would be more beneficial for them in this area. In a study of 140 patients over 80 years of age followed for four years after implantation of pacemakers, the prognosis was significantly favorable in the group of patients with dual versus single-chamber pacing (20). In a randomized, double-blind study with double cross-over, Ouali et al. analyzed patients' clinical status over 70 years of age stimulated for atrioventricular block [21]. They showed that patients in single-chamber with rate response (VVIR mode) had a lower quality of life than dual-chamber pacing. Also, they experienced impaired left ventricular function, left atrium enlargement, and degradation of their functional capacity. These changes can lead to heart failure more quickly and then to death. Syncope is usually a clinical manifestation that unequivocally indicates pacemaker implantation for patients with proven or suspected severe bradycardia. But another aetiology cannot be ruled out if the mechanism of syncope is not documented. Ricci et al.'s meta-analysis showed that among older, diabetic, and/or hypertensive individuals, a history of noncardiac/unexplained syncopes, even in the absence of an obvious cardiac etiology, is associated with higher all-cause mortality [22]. Atrial fibrillation is relatively common in the elderly and among patients with pacemakers [23]. Single-ventricular pacing, in that case, favors its occurrence [4]. Atrial fibrillation increases the risk of death by two in women and by 1.5 in men [25, 26]. 20 to 30% of strokes are due to this condition [27]. And we find 20 to 30% of left ventricular dysfunction among patients with atrial fibrillation [28]. The single ventricular- pacing mode (with rate response) is recommended for patients with permanent atrial fibrillation [7, 8]. All these facts combined may explain that, in our cohort, atrial fibrillation is a predictor of death and associated with single-ventricular pacing.

This work was a retrospective, non-randomized study. So, some data could not be obtained. Left ventricular ejection fraction was not assessed, after pacemaker implantation, during the follow-up. QRS duration and type were not taken into account and could help to understand patients' outcomes. Switches from dual-chamber mode to single ventricular mode and vice-versa were not considered. But despite these shortcomings, our study had the advantage of being carried out in real life and giving results consistent with the randomized studies.

This study allows us to consider changes to our practices even though our resources are limited. Thus, we need to reconsider the dual-chamber pacing in the elderly. Besides, we should use the methods of preservation of right ventricular pacing to avoid the occurrence of de novo atrial fibrillation. If the left ventricular ejection fraction is impaired, it would be helpful to avoid pacing in the apex of the right ventricle; It would be better to perform His or left bundle branch pacing.

The Abidjan Heart Institute ethics committee approved the study. The data collected were analyzed under the data protection laws for individuals, following ethical principles according to the Declaration of Helsinki.

The authors express their gratitude to the staff of the pacing unit of Abidjan Heart Institute.

None declared. All the authors express that there was no conflict of interest in writing this research article