Vascular smooth muscle cells (VSMC) are the main cellular components of blood vessel walls and bear external mechanical forces caused by blood flow and pressure. In this report, we have verified the following hypothesis through experiments: The increase in VSMC stiffness may be mainly due to changes in vascular stiffness due to aging.

Although aging enhances the stiffness and adhesion of VSMC, there is no significant difference in apparent elastic modulus and adhesion between the VSMC obtained by male and female. The effect of aging through the ECM-integrin-cytoskeleton axis is related to increased VSMC stiffness and matrix adhesion rather than gender.

Most prior studies have utilized either indirect measurements of vascular stiffness or examined isolated vessel preparations. Additionally, most prior work has focused on the extracellular matrix (ECM) or endothelial control, as the source of the changes in vascular stiffness [1-6]. These ECM changes were primarily seen as an increase in total collagen and a decrease in elastin [6, 7]. VSMCs are the main cellular components of blood vessel walls and bear external mechanical forces caused by blood flow and pressure. The aging process reduces the number of VSMCs in arteries, and the remaining VSMCs are enlarged in cell size to work harder [8, 9]. The mechanical properties and behavior of a single VSMC are mainly considered to play a key role in the development of vascular diseases [10, 11]. Cytoskeletal action and role in VSMCs include contractile filament cycling for the actin and myosin cross-bridge and remodeling of cytoskeletal architecture and construction to employ and perform the mechanical forces [12, 13]. The cytoskeletal behaviors flexibly and livelily support and sustain VSMC elastic and adhesive properties to respond and regulate vascular physiological functions. More importantly, the cytoskeleton is physically and func-tionally participated and joined to the cell adhesive process.

VSMC imposes the regulation and control of ECM assembly, composition and architecture through cell adhesion, and they are likely playing an important role in the ECM stiffening associated with aging. Meanwhile, VSMCs also can conversely alter their signaling state to reflect the rigidity of the ECM through adhesions to the ECM cells. Thus, the relationship is made complex by the changing and lively two-way interaction between ECM-adhesion site- cytoskeleton [14]. The AFM probe deflection and applied force can be used to determine cellular elasticity by an AFM probe indenting the surface of the cell [15, 16]. The AFM probe is functionalized with a ligand, and then the adhesion of the AFM probe to the cell surface can be used to evaluate cell adhesive interactions and this has been a successful application for studies of VSMC-ECM interaction [7, 17-19]. For these studies we used atomic force microscopy and imaging to estimate and evaluate Young’s modulus of elasticity and adhesion in aortic smooth muscle cells derived from groups of old and young primates.

VSMCs from thoracic aorta of monkeys were enzymatically isolated and used at passages 2 to 4. All external fat, connective tissue, adventitia and endothelial layer were carefully detached and removed. The prior publications provided the detail methods [20-22].

The topographical images of VSMC in this chapter were operated in contact mode by an AFM instrument, which is a Bioscope System (model IVa, Veeco Mertrology Inc.) mounted on an Olympus IX81 microscope (Olympus Inc.), and the AFM probe scanned across the cell surface (35 to 40 mm/s) with a tracking force of 300~500 pN. Transverse VSMC stiffness was measured in force mode using silicon nitride cantilevers [23-25], and the AFM probe was repeated to approach and retract from the cell surface at 0.5 Hz (tip speed 800 nm/s) to collect 15-20 force curves from the same site on each VSMC (30-40 s of recording). 10-20 cells were randomly selected and the AFM probe indented at a site midway between the nucleus and cell margin (150-400 force curves per cell) for each experiment. Young's modulus theory was applied to interpret and translate the recorded approach-rapture force curve into the AFM force-indentation description and statement for the quantification of VSMC elasticity. The calculation of the elastic modulus was:

where the indentation force (F) was stated and described using Hooke's law (F =κΔx, κ and Δx denote the AFM probe's spring constant and the probe's apparent deflection). The indentation depth (δ) is identified from the difference in the AFM piezo movement in z direction and the AFM probe deflection. E is the Young’s modulus of experimental cell as the value of elasticity, and ν denotes 0.5 for cell as the Poisson ratio. The numerical α is the semi-included angle of the cone for a pyramidal tipped probe and determined by the probe shape (MLCT, Veeco Mertrology Inc., Santa Barbara, CA) [26, 27]. An authoritative software NforceR is often applied to quantitatively analyze the apparent force- distance curves [28]. β1 integrin was identified on the VSMC surface using AFM probes labeled with fibronectin (1mg/ml) (Invitrogen, Grand Island, NY). Probes were operated in force-mode and repeated to indent and retract from the cell surface and specific adhesions detected as sharp shifts in the retraction curves using automated software (NforceR) [28]. With each probe, 10 randomly selected cells were sampled 50-60 times to collect approximately 500-600 force curves for analysis.

Isolated VSMCs were cultured and grown for 48 hours on glass substrate dishes under 37oC and 5% CO2 environment, and then fixed in 4% formaldehyde. The fixed cells were permeabilized with 0.1% Triton-X 100 for 5 minutes, rinsed and incubated with the primary antibodies overnight. Rinsed and washed 6 times using an antibody buffer, the cells were stained with the fluorescent secondary antibody. The cells were imaged by confocal microscopy for pan actin and α5β1-integrin.

Data are described as mean ± SEM for the number of samples reported in each figure legend. Statistically significant differences between young and old monkeys were identified using Student’s t-test. A value of P<0.05 was considered significant. 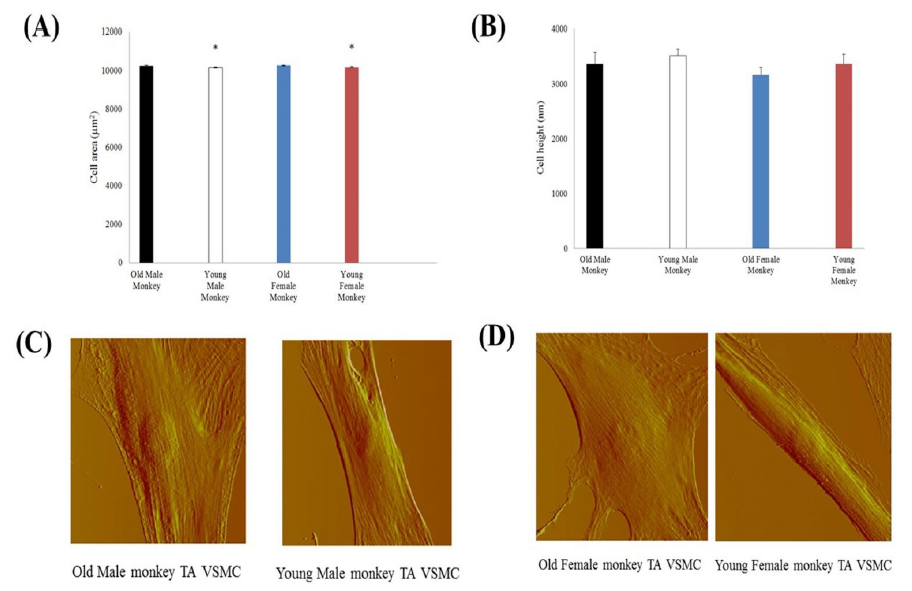 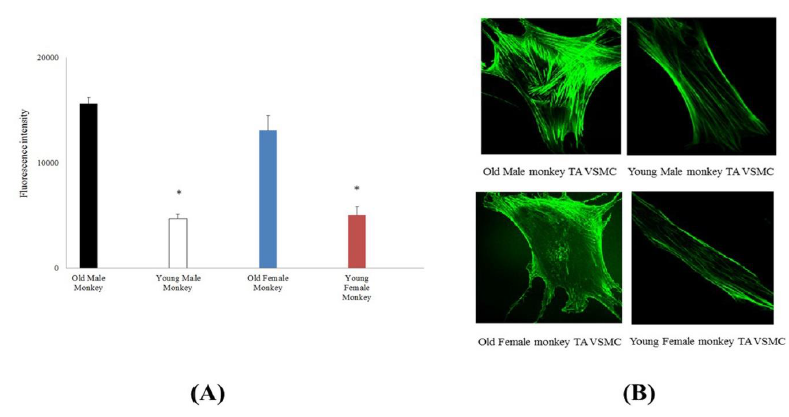 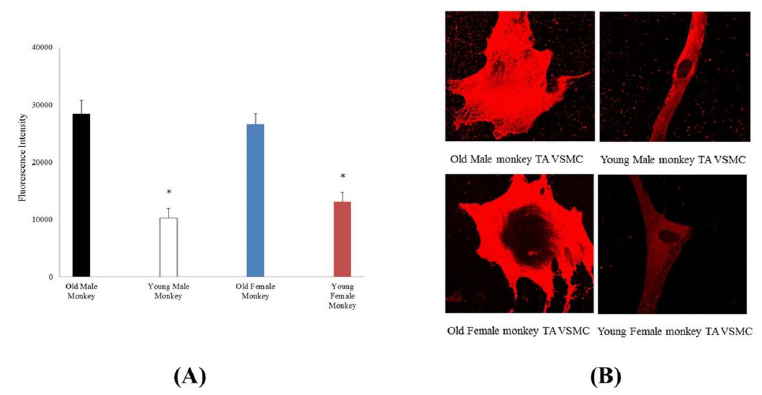 Our prior research showed the abundance of alpha-smooth muscle actin in cytoskeleton of the old monkey VSMCs [20, 21]. From the AFM image data, the area of single VSMC is significantly higher in old compared to young monkeys, thus the physical character of single old monkey VSMC is different from that of young one. A single vascular smooth muscle cell from male monkeys (Macaca fascicularis) was measured with AFM indentation method, and the old VSMC is obviously harder than the young one in elasticity. Meanwhile, the alpha-SMA of cytoskeleton mainly contributes to the inherent mechanical feature of VSMC (Figure2B). The adhesion force significantly enhanced in old compared to young monkeys due to old monkeys’ higher expression of β1-integrin [20, 21].

Fibronectin specifically binds with β1-intergrin [29, 30]. The α-SMA is an important component of the ECM-integrin-cytoskeltal axis responsible for mechanosensation, -transduction and -transmission [31-33]. Meanwhile, the β1-integrin, which is one of transmembrane proteins for the interaction between the ECM protein and the cytoskeleton, provides an important mechanical role and association with the extracellular environment [14, 34, 35]. Interestingly, the apparent values of stiffness of VSMCs between male and female of young monkeys were closed. In summary, we demonstrate that aging is associated with increased VSMC stiffness and cell- matrix adhesion via the ECM-integrin-cytoskeltal axis responsibility rather than gender.