Although sudden cardiac death risk stratification criteria have been validated for adults, its application is not recommended in a pediatric population. After considering risks and benefits, choosing the ideal candidate for an implantable cardioverter defibrillator (ICD) for primary prevention purposes still remains a challenge in a child with hypertrophic cardiomyopathy. In children, major issues concerning transvenous ICDs are those related to the lead implantation and the increased risk of systemic infections at mid-long term. With these in mind, it would appear that a subcutaneous ICD, in this population group, is an alternative to be considered.

This case regarding a 30Kg, an 8-year-old child with hypertrophic cardiomyopathy highlights the difficulties in sudden cardiac death risk stratification, raises the questions related to which type of ICD to implant and illustrates the feasibility of a subcutaneous ICD in this particular setting.

Hypertrophic cardiomyopathy (HCM) is the most common inherited cardiomyopathy [1] and it accounts for 42% of childhood cardiomyopathies [2]. The commonest form is typically characterized by asymmetric septal hypertrophy [3] in the absence of abnormal loading conditions, such as systemic arterial hypertension, valvular and subvalvular aortic stenosis [1, 4].

The disease prevalence has been estimated as high as 1 per 500 in young adults [1, 3]. Its prevalence in pediatric patients is unknown, however population based studies from the USA, Australia and Finland have reported an annual incidence between 0.24-0.47 per 100,000 children [5].

HCM has an autosomal dominant Mendelian inheritance pattern with variable expressivity and age-related penetrance [6]. In up to 60% of adolescents and adults with HCM, the disease is caused by mutations in the cardiac sarcomere protein genes [4]. More than 1400 mutations have been identified, MYBPC3 and MYH7 gene mutations being the most frequently found (in about 70% of HCM cases) [7].

Clinical presentation is phenotypically diverse, ranging from asymptomatic patients to heart failure or sudden cardiac death (SCD) [1], the latter one of the presenting events in a previously healthy child [7]. The rate of SCD in childhood HCM varies widely, with the most recent population-based study reported an annual SCD rate of 1-2% per year, which, although lower than previous reports (7% per year), is still higher than the SCD rates reported in adults [8].

It is undoubtedly crucial to identify the patients at risk for SCD who will benefit from primary prevention strategies. Recently, a stratification SCD-risk model has been proposed and validated [4] but it is not recommended in patients <16 years of age. As such, risk stratification in children with HCM remains a challenge [5].

In this report, we present a case of a 30Kg, 8-years-old child that represents the challenges of risk stratification in childhood HCM and illustrates the applicability subcutaneous implantable cardioverter defibrillators (S-ICD) in this age group.

The authors present the case of an 8 year old, asymptomatic boy with HCM with no family history of HCM or SCD, followed up at our Outpatient Clinic since the age of 9 months. During follow-up, repeat transthoracic echocardiograms had been compatible with non-obstructive HCM and 24h-Holters revealed absence of ventricular tachycardia episodes. Genetic screening identified two heterozygous mutations (p.Gly279Ala and p.Glu441Lys) in the MYBPC3 gene, in both our patient and the mother, the latter phenotypically normal. At 8-years-old, the transthoracic echocardiogram showed asymmetrical left ventricular hypertrophy with a septal distribution (a maximum wall thickness of 22mm, Z score +5.96, in the parasternal short axis view), withoutleft ventricular (LV) outflow tract obstruction, normal biventricular systolic function and a normal sized left atrium (LA). At this point, based on adult stratification risk factors criteria, he only presented one risk factor for SCD, severe left ventricular hypertrophy, and due to his young age, the management option was to remain conservative and maintain regular surveillance.

Ten months later, whilst at school and at rest he had a sudden cardiorespiratory arrest. Adequate cardiopulmonary resuscitation was initiated at once and performed for approximately 15min prior to the arrival of the emergency medical service. Ventricular fibrillation (VF) was identified and he was successfully treated with a single non-synchronized shock. He was admitted in the pediatric intensive care unit, where he remained hemodynamically stable, with no evidence of neurological or cognitive sequelae. A cardiac magnetic resonance was carried out, which revealed: normal sized LA and left ventricle [LA area: cm2; LV end-diastolic volume: 40ml / m2]; asymmetrical septal hypertrophy, predominant in the mid-ventricular region (maximum of 27mm, Z score + 6.92); normal systolic function, absence of obstruction to the LV outflow tract and without areas of late myocardial enhancement.

After weighing the risk-benefits, and despite the body weight (30Kg), the option was to implant a S-ICD. The procedure was performed under general anesthesia using the two-incision technique (Figure 1). Defibrillation testing was successfully performed and a post procedure chest X-ray (Figure 2) was done, which showed no evidence of procedure related complications. He was discharge on a beta-blocker (propranolol). Both incisions healed well and despite his weight, the generator was not as prominent as expected (Figure 3). Two months after the procedure, another VF episode occurred, with recovery of consciousness after three shocks. Interrogation of the S-ICD system showed appropriate detection and treatment by the device. At this stage, amiodarone was added to the therapeutic regimen and he has been asymptomatic. 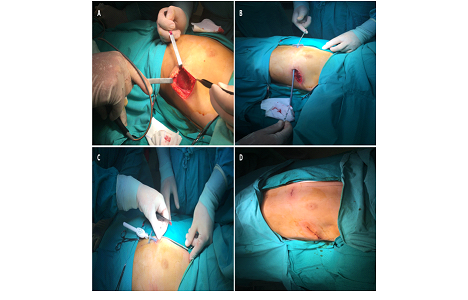 Figure 1: The procedure was performed under general anesthesia using the two-incision technique. 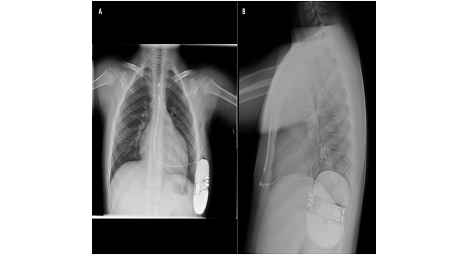 Figure 3: Both incisions healed well and despite his weight, the generator was not as prominent as expected

This report highlights the challenges regarding primary prevention for SCD in pediatric HCM patients, the risk-benefit of the two available implantable cardioverter defibrillators (ICD) systems - transvenous vs. subcutaneous and also the feasibility of S-ICD implantation in children due to weight considerations.

After several decades, risk factor stratification in the context of primary SCD prevention has remained a challenge. Although published recently for the adult population, criteria for risk stratification based on a 5-year risk for SCD [4] cannot be extrapolated for patients under the age of 16 years [4], even though, the latter present a higher risk of SCD [8].

In the pediatric population, both European and American guidelines [4, 9], recommend the use of four risk factors for SCD stratification: severe left ventricular hypertrophy, with maximum LV wall thickness ≥ 30 mm or Z score ≥6; unexplained syncope; nonsustained ventricular tachycardia and a family history of SCD. However, its evidence is far from being robust since only few series focused on children [2, 8]. A recent meta-analysis, made up of twenty-five studies with 3394 patients, evaluated the role of these risk factors in children with HCM and interestingly, only one showed a significantly increased risk of death for those with a severe left hypertrophy [10], which was the only criteria that our patient presented.

Taking into consideration primary prevention risk stratification criteria, our patient, at a younger age, was considered a candidate for an ICD, but after analyzing the impact of the device in the patient lifestyle and psychological health [4], we opted for conservative management. In addition, despite the undeniable advantages of an ICD, its implantation should always be treated with particular caution in the pediatric population since they will present a higher rate of complications compared to adults [2, 8]. However, following an arrhythmic event in our patient, the need of an ICD as secondary prevention became mandatory, reinforcing the need of better tools for SCD risk stratification in children with HCM.

Although in our case cardiac magnetic resonance was only performed after the arrhythmic event, it is an important diagnostic tool in in young patients with HCM. It not only provides more precise wall thickness measurements, but it also identifies apical LV aneurysms or the presence of late gadolinium enhancement. The latter finding still requires more studies to assess its predictive value in this population’s subset [11, 12].

The disadvantages and limitations of conventional ICD are well known, particularly in children. The placement of transvenous leads may be complicated by acute procedure-related problems (pneumothorax, hemothorax and cardiac perforation), but especially long-term complications such as lead fracture, infection and venous obstruction [13, 14, 15]. The transvenous leads are the weakest link of the ICD system, particularly in children who are more physically active [16].

In the recent years, in order to overcome the lead-related problems and infection related concerns, particularly systemic, an entirely extravascular defibrillator system has been introduced [13, 15] - the S-ICD. In fact, a recent meta-analysis that compared both types of ICD, confirmed the theoretical low rate of lead-related problems in the S-ICD group [17]. Despite the infection rate being reportedly inferior in the S-ICD group, it did not reach statistical significance. Also the authors, identified infection when antibacterial therapy was required or the system required explantation, but did not discriminate the rate of systemic infection [17]. Regarding inappropriate shocks, the rate was similar, although in the S-ICD group these were mostly due to T-wave oversensing and in transvenous-ICD one they were due to supraventricular tachycardia [13, 16, 18].

The main concerns about S-ICD systems are their inability to provide anti-bradycardia and tachycardia pacing [13, 15]. These limitations are, however, less relevant in children and young adults as the most frequent underling pathology will probably cause VF or fast ventricular tachycardia, that are unlikely to respond to antitachycardia pacing [14, 15]. This is especially true in the present case, given the HCM diagnosis.

Following the screening process [basal and after treadmill test for reducing inappropriate therapies in the follow-up [19, 20] we considered our patient eligible for a S-ICD, as he did not require pacing, neither was he a candidate for cardiac resynchronization therapy, thus avoiding the future lead-related problems or systemic infections given his young age [21]. Nevertheless, the S-ICD System has not been evaluated for pediatric use [22].

As there was data published about the feasibility of S-ICD implantations in young patients, we opted to go ahead and implant an S-ICD. (23) Despite a relatively large S-ICD generator to body size, a recent study showed an equal or even better patient quality of life compared those with transvenous devices [13]. Furthermore, S-ICDs do not limit arm movements and patients recover rapidly after implantation, which makes them especially suitable for younger and more active individuals [15]. Despite the short follow-up period, there have been no issues in our patient regarding arm movement or related to the device’s size or inappropriate therapies. The patient experienced one episode of VF and received three appropriate shocks.

More data is required for this age group, as body surface area changes throughout childhood and, if indeed, subcutaneous-ICDs have greater advantages as compared to the tranvenous-ICDs.

Primary prevention SCD risk stratification in pediatric HCM patients still remains a challenge. Due to their theoretical advantages, S-ICDs are an important alternative and should be considered in children.