Methods: Using a Japanese nationwide database, we identified pediatric patients with out-of-hospital cardiac arrest from January 2005 to September 2017. We used a generalized linear model to compare outcomes between patients with and without physician involvement during pediatric outof- hospital cardiac arrest. The primary outcome was neurologically favourable survival after 1 month. Secondary outcomes were the return of spontaneous circulation and 1-month survival.

Conclusions: Physician involvement during pediatric out-of-hospital cardiac arrest was associated with lower 1-month neurologically favourable survival rates, although it was associated with a better return of spontaneous circulation than that in the physician-absent group.

2.1 Emergency Medical Service (EMS) System in Japan: In 2019, there were 726 fire stations with dispatch centers in Japan. The Fire and Disaster Management Agency of Japan supervise the EMS system. In Japan, the emergency team is usually not permitted to terminate the resuscitation of patients with OHCA in a prehospital setting. All patients with OHCA are transported to hospital except in cases of decapitation, incineration, decomposition, and rigor mortis. Therefore, the Japanese EMS system is ideal for investigating the association between physician involvement during pediatric OHCA and patient outcomes. In a prehospital setting, the EMS team, comprising three people, can perform the following procedures for patients with OHCA: (i) obtain and assess an initial electrocardiogram (ECG), (ii) use an automated external defibrillator; place a peripheral intravenous line, administer Ringer’s lactate solution, and administer adrenaline (epinephrine) intravenously; and ventilate using a bag valve mask; and (iii) establish an advanced airway using an endotracheal tube, a laryngeal mask airway, a Combi-tube, and an esophageal gastric tube airway. Some procedures require instructions from a physician remotely. Patients with OHCA are treated according to Japanese Cardiopulmonary Resuscitation (CPR) guidelines, which are based on guidelines issued by the American Heart Association, the European Resuscitation Council, and the International Liaison Committee on Resuscitation. If an EMS team determines that it would be preferable to have a physician at the scene, the team picks up a hospital physician while enroute to the scene or calls a physician to attend the scene. However, there are no strict criteria for requesting physicians to attend a scene, with many complex factors such as the severity of the patient's illness, geographical conditions, and local medical resources influencing this decision.

2.2 Data Collection: We collected patient data from an ongoing prospective Japanese nationwide prehospital database, namely, the All-Japan Utstein Registry of the Fire and Disaster Management Agency. The database has been described in detail elsewhere [3,4,9]. Briefly, this population-based registry covers approximately 127 million residents in Japan. All patients with OHCA have been registered. Data have been collected since January 2005 and continue to be accumulated. The registry is based on the International Utstein style [10]. The database contains patients’ age (years), sex, date of the OHCA, call time to the EMS, suspected etiology of cardiac arrest, type of witness, interventions by bystanders (chest compression, rescue breathing, and defibrillation), provision of dispatcher CPR instructions, initial ECG rhythm at the time of EMS contact, interventions by healthcare providers (defibrillation, advanced airway device use, intravenous fluids, and adrenaline use), EMS arrival time at the scene, and outcomes (ROSC, 1-month survival, and 1-month cerebral performance categories [CPCs]).

2.3 Patient Selection: We collected data concerning pediatric patients with OHCA (age range, 0–18 years) from January 1, 2005 to September 9, 2017. We excluded patients with unrealistic time records, unknown outcome status, and patients who did not receive any resuscitation by bystanders or healthcare providers. We divided the patients into two groups: 1) patients who received physician involvement on site during OHCA (physician-present group), and 2) patients who did not (physician-absent group). Physician involvement was defined in the database as any physician present, regardless of whether or not a procedure was performed.

2.4 Variables and Outcomes: We considered the following variables: age, sex, year of the OHCA, season, call time to EMS, suspected etiology of cardiac arrest, type of witness, interventions by bystanders (chest compression, rescue breathing, and defibrillation), the provision of dispatcher CPR instructions, initial ECG rhythm at the time of EMS contact, and time from emergency call to EMS arrival at the scene, to perform adjustments required for these patients.

We subdivided the patients into the following age categories: new-borns and infants (0 years), toddlers to younger grade-schoolers (1–7 years), children (8–12 years), and adolescents (13–18 years).11–13 The year of the OHCA was categorized as follows: 2005–2009, 2010–2013, and 2014–2017. We also categorized the seasons as follows: January–March, April–June, July–September, and October–December. We divided the time of cardiac arrest into morning (0600 h to 0900 h), daytime (0900 h to 1700 h), evening (1700 h to 2200 h), and night-time (2200 h to 0600 h) based on previous studies and patterns of medical staffing [11,14,15]. The etiology of cardiac arrest was grouped into cardiac causes, other medical causes (respiratory disease, cerebrovascular disease, malignant tumor, hypothermia, anaphylaxis, and any medical disease), and external causes (traffic accident, suffocation, drowning, and trauma). The time from the emergency call to the EMS arrival at the scene was divided equally into four categories: <6 min, 6–7 min, 8–9 min, and >9 min. The primary outcome was 1-month neurologically favourable survival using Glasgow-Pittsburgh CPCs as measures of neurological outcomes [10]. CPCs are defined as follows: CPC1, good cerebral performance; CPC2, moderate cerebral disability; CPC3, severe cerebral disability; CPC4, coma and vegetable state; and CPC5, brain death. We defined CPC1 and CPC2 as ‘neurologically favourable survival [16]. The secondary outcomes were ROSC and 1-month survival rates.

2.6 Ethics Statement: This study was approved by the Institutional Review Board of the International University of Health and Welfare, Narita Hospital, Japan (approval number: 21-Im-043, September 28, 2021). The requirement for informed consent was waived due to the use of anonymized data. 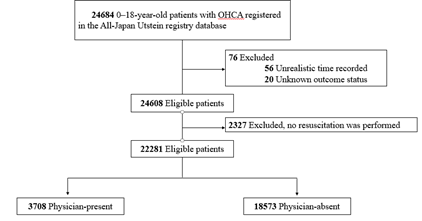 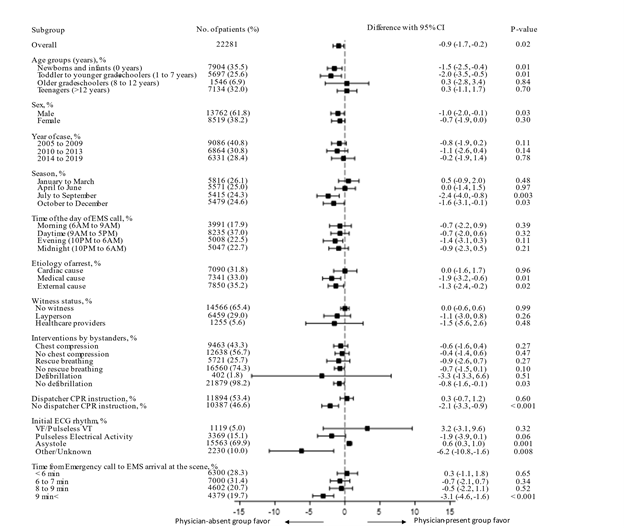 Table 1: Patients' Baseline Characteristics in the ‘Physician-Present’ and ‘Physician-Absent’ Groups.

We investigated the association between physician involvement during pediatric OHCA and patient outcomes using a nationwide prehospital database in Japan. The physician-present group showed lower 1-month neurologically favourable survival rates than the physician-absent group. However, pediatric patients with OHCA and an asystole rhythm showed higher 1-month neurologically favourable survival rates compared to patients with other rhythm. For secondary outcomes, there was no difference in 1-month survival rates between the groups; however, the physician-present group had a higher ROSC rate than the physician-absent group. Compared with previous studies that have focused on adult patients with OHCA, neurologically favourable survival and 1-month survival rates were inconsistent.4–7 Our results can be explained as follows. First, according to the subgroup analysis, fewer instances of dispatcher CPR instructions and longer times from the emergency call to EMS arrival at the scene may have affected our finding that the physician involvement group had poorer outcomes. One possibility is that because a physician was dispatched, the dispatcher CPR instructions might not have been emphasized for patients who would have otherwise required appropriate CPR instruction. Moreover, the extra time required to dispatch a physician to the scene may have delayed the arrival and interventions of other healthcare providers. As a result, the quality of CPR in the group with physicians present may have been diminished. Second, there were differences noted in terms of the etiology of the OHCA. Coronary artery disease is the most common cause of cardiogenic cardiac arrest in adults, whereas congenital heart disease is reported to be the most common cause in pediatric patients [23,24]. After resuscitation, acute coronary syndromes can be treated with percutaneous coronary intervention; however, treating congenital heart disease is very challenging. The resuscitation rate is high with early intervention by physicians; however, for this reason, the prognosis of OHCA at 1 month may not be satisfactory. Third, oxygenation is less important for resuscitation in patients with ventricular fibrillation/pulseless ventricular tachycardia than for those in asystole as sufficient oxygen may remain in the blood; therefore, chest compressions and defibrillation are effective during CPR [25-27]. However, in the case of patients in asystole, there is insufficient oxygen in the blood, and establishing a secured airway and administering oxygen may be necessary for resuscitation. Physician involvement in patients with asystole showed higher neurologically favourable survival rates. A similar finding was observed in a study concerning the relationship between ECG waveforms and adrenaline administration [28]. The effects of adrenaline differed depending on the initial waveform. Individualized medical interventions using ECG waveforms are expected in the future. Our study has several implications for improving the outcomes of physician involvement in OHCA in future. First, it is recommended that a dispatcher provide CPR instructions, even when physicians are being sent to the scene. Second, it may be advisable to establish an EMS that reduces the time to physician arrival at the scene. Third, in future, if technology enables the detection of ECG waveforms immediately after the occurrence of OHCA, it may be desirable to develop within the EMS the ability to choose whether to prioritize dispatching a physician or arriving at the scene earlier with the emergency team only. This study had several strengths. First, this is the first study to evaluate the association between physician involvement during pediatric OHCA and patient outcomes. Second, we adjusted for patients’ backgrounds using a generalized linear model with several prehospital information variables. Third, we performed overlap weights for the sensitivity analysis and confirmed the robustness of the analysis. The results were found to be the same as those of the main analyses. This study had some limitations. First, the database did not include information regarding patients’ backgrounds, such as past medical history, comorbidities, and socioeconomic status. Second, we could not determine why a decision to dispatch a physician was made in each case. Third, because of the nature of this prehospital database, there was no information on in-hospital care. Fourth, we could not evaluate the quality of prehospital care. These limitations could have affected patient outcomes.

This study was approved by the Institutional Review Board of the International University of Health and Welfare, Narita Hospital, Japan (approval number: 21-Im-043, September 28, 2021). The requirement for informed consent was waived due to the use of anonymized data.

Availability of Data and Materials:

This research received no specific grant from any funding agency in the public, commercial or not-for-profit sectors.

We thank all the EMS personnel, the participating physicians, and the Fire and Disaster Management Agency for their generous cooperation in establishing and maintaining the database.