The Association of Dobutamine and Ivabradine in Heart Failure and Circulatory Choc: A Case Report and Narrative Review

The authors take the opportunity to present a narrative review on the combination of dobutamine and ivabradine.

The treatment of choice for low cardiac output syndrome (LCOS) is dobutamine, which has a powerful positive inotropic effect by stimulating more beta than alpha adrenergic receptors, resulting in a decreased afterload. The major drawback of dobutamine is its positive chronotropic effect responsible for tachycardia which can compromise the benefit of its inotropic effect. On the one hand, tachycardia reduces the filling time and can reduce the ejection volume despite an increase in the strength of the myocardial muscle. On the other hand, dobutamine increases oxygen consumption which can be harmful in the event of an imbalance in the oxygen use [1]. Dobutamine is an independent risk factor for mortality in cardiac surgery [2, 3]. The aim of the authors is to show, through a case report, a means of countering this tachycardia induced by dobutamine with the expected benefits of this type of association.

A 50-year-old Caucasian male patient was admitted to intensive care for a septic shock induced by a severe pneumonia empirically treated with moxifloxacin by his general practitioner. After fluid administration of two times 30ml/kg of crystalloids, norepinephrine was started and raised to 0.30 μg/kg/min. Piperacillin-tazobactam 4g as loading dose and then 12g through continuous IV infusion was started associated with a one-time dose of 25mg/kg of amikacin. Increased hypoxia induced orotracheal intubation and mechanical ventilation one the end of the first day. On day two, severe hypotension induced a rise in norepinephrine up to 0.54 μg/kg/min. A cardiac ultrasound was performed showing a decreased cardiac function (Left ventricular ejection fraction (LVEF) of 35% with an sub-aortic Velocity Time Integral (VTI) at 9 cm/sec with high filling pressures). The measured ScVO2 was 48%. In order to optimize cardiac output in this septic shock situation, dobutamine was initiated at 5 μg/kg/min. The hemodynamics was then marked by sinus tachycardia without improvement in blood pressure (Figure 1). Ivabradine was started at 5 mg 2 times daily which improved hemodynamics characterized by a decrease in heart rate to 82/min and an improvement in systolic blood pressure to 125 mm Hg and mean arterial pressure to 95 mmHg (Figure 2). Cardiac ultrasound showed an improvement in left ventricular systolic function (LVEF 45%) and increased cardiac output (sub-aortic VTI at 22 cm/sec) as well as a normalization of filling pressures (E/A ratio at 1.65). The ScVO2 after 24 h of treatment was 70%. Norepinephrine could be reduced to 0.24 μg/kg/min the next day and was stopped on day 5. He was extubated on day 6. The patient continued improvement and was discharged from the intensive care unit on day 10, and from the hospital on day 17. 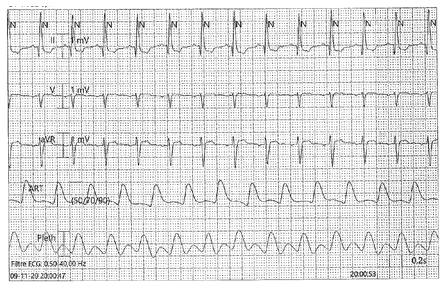 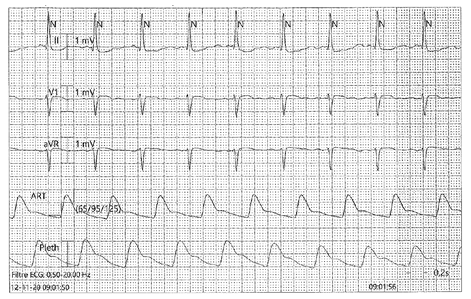 In septic shock, a phenomenon of deep myocardial depression characterized by global hypokinesia and alteration of the systolic function of the left ventricle with a left ventricular excretion fraction (LVEF) below 40% which was reversible between the seventh and the tenth day. This was described for the first time by Parker in1 984 [4]. It was then shown in all patients with septic shock that a left ventricular systolic dysfunction was present and associated with a preload defect [5]. Several mechanisms are associated with the myocardial involvement of sepsis [6, 7] as shown in Table 1. This cardiac component is conventionally taken care of by the administration of dobutamine with the side effect of further acceleration of the heart rate and/or tachyarrhythmias. Dobutamine-induced sinus tachycardia increases oxygen uptake and impairs ventricular filling time and ejection volume despite increased myocardial muscle strength [1]. Ivabradine is a therapeutic agent that inhibits the If channel of the sinus node, which regulates the myocardial diastolic relaxation curve and decreases heart rate without alteration of the atrioventricular and intraventricular conduction, as well as ventricular repolarization as can amiodarone or beta blockers [1]. Beta blockers are currently recommended as a first-line treatment to slow heart rate in chronic heart failure followed by digoxin and amiodarone in case of contraindications [8]. Amiodarone added to dobutamine has shown a benefit in terms of survival in chronic heart failure treated with intermittent course of dobutamine [9]. Ivabradine has been proposed as a new alternative in chronic and acute heart failure [8].

3.1 Dobutamine and ivabradine in heart failure

Adding ivabradine to dobutamine has been observed to decrease heart rate and increase ejection volume in acute heart failure [10]. In a study of 58 patients with acute cardiac decompensation (LVEF <35%), the authors randomized 29 patients to an ivabradine arm and 29 to a control arm. These patients were treated with incremental doses of dobutamine of 5, 10 and 15 μg/kg/min. The doses of ivabradine were of 7.5 mg two times daily. The patients were followed by Holter. The authors observed a significant increase in heart rate in the control group (ANOVA with p <0.001) while there was no change in the ivabradine group (ANOVA with p = 0.439). Several studies such as the CIBIS II study [11] and the BEAUTIFUL study [12] have shown that tachycardia is a risk factor in mortality in patients with chronic heart failure or asymptomatic left systolic dysfunction. The SHIFT study ivabradine versus placebo in heart failure involving 6558 patients showed a benefit of reducing heart rate below 70/min in terms of rehospitalization for cardiac decompensation and mortality [13]. After stabilization of acute heart failure, it was shown that, in 22 patients with a left ventricular ejection fraction (LVEF) <35%, the addition of ivabradine during stress echocardiography significantly increased LVEF by 7.2 ± 4.7% with ivabradine versus 3.6 ± 4.2% without ivabradine (p = 0.002). Each patient being his control in this study [14].

A randomized ivabradine versus placebo study was performed in 47 patients undergoing CABG surgery. Of these 47 patients, 26 developed LCOS and received dobutamine. Nineteen patients developed sinus tachycardia with a heart rate greater than 100 beats per minute. 14 patients received ivabradine and 5 patients received placebo. The primary end point was a reduction in heart rate whose target values were 80 to 90 bpm for at least 30 minutes. The primary endpoint was reached in 93% of patients treated with ivabradine and 30% of patients treated with placebo. The time to reach the target values was 1h [0.5-1.5] in the ivabradine group and 5.7h [5.7-5.9] in the placebo group. Cumulative doses of dobutamine were comparable between the two groups. The authors observed concomitantly, with the reduction in heart rate, an increase in the LV ejection volume and systolic blood pressure [1].

3.3 Dobutamine and Ivabradine in cardiogenic shock

Little data is available on cardiogenic shock [15]. A few case reports have reported a decrease in heart rate with a concomitant increase in ejection volume under ivabradine [16, 17]. An animal study performed on pigs with cardiogenic shock of ischemic origin showed that the combination of dobutamine and ivabradine increased systolic ejection but also facilitated relaxation [18]. A case series of 5 patients in cardiogenic shock defined by a cardiac index below 2.0 l/m2 and an increase in filling pressures were treated with Ivabradine for sinus tachycardia above 100 bpm. The authors observed a significant decrease in heart rate, pulmonary arterial occlusion pressure and right atrial pressure. They also observed a significant increase in mixed venous oxygen saturation and stroke volume [19].

3.4 Dobutamine and Ivabradine in septic shock

Few data exist on septic shock in humans. Some authors have proposed the use of ivabradine in septic shock in induced tachycardia [20]. These recommendations are based only on work in cardiogenic shock. Preliminary work exists as the Scherubel study carried out in vitro on human myocytes showing that the inhibition of the If receptor by ivabradine was preserved in the presence of bacterial endotoxin [21]. Further work in hamsters has shown that ivabradine was effective in reducing microvascular derangements evoked by experimental sepsis, which was accompanied by less organ dysfunction in animals [22]. The benefits of ivabradine are decreased because septic shock is accompanied by endothelial dysfunction on which ivabradine has few effects on. Isolated heart rate reduction by ivabradine in an experimental model of septic shock in rats does not appear to be associated with any effect on the tested parameters like cardiac function or vascular responsiveness to vasopressors [23].

Ivabradine has been shown to be beneficial in acute heart failure and possibly in cardiogenic shock. In the context of septic shock, few data exist. The principles of heart failure seem to apply to demonstrated septic cardiomyopathy but not to septic shock in general which is more complex. All these results are related to pilot studies with few patients or to animal experiments. Larger randomized controlled studies are needed to be able to strongly recommend the combination of dobutamine and ivabradine in such a context.

RA and SR designed the paper. All authors participa-ted in drafting and reviewing. All authors read and approved the final version of the manuscript.

The authors declare that they have no competing interests