The Predictive Role of CD40L in The Development of Abdominal Aortic Aneurysms in A Murine Model: A Pilot Study

The mechanism behind the incidence and the development of infrarenal aortic aneurysm and the factors affecting the rate of aortic dilatation remain largely unknown. The need for a biomarker capable to facilitate the diagnosis and the timed repair of an aortic aneurysm could reduce overall mortality. The aim of this study is to report on the potential predictive role of CD40L in aortic diameter growth and the development of AAA. The study group of 16 Wistar rats underwent a laparotomy and an infusion of porcine pancreatic elastase of the infrarenal aorta under hydrostatic pressure. The control group (n=16) underwent a sham procedure. At an interval of seven days, the animals of both groups underwent a laparotomy and the aortic dimension was measured. Blood samples were obtained at the same intervals. No significant change of the animals’ weight was recorded. AAA was formed in all animals and aortic diameters differed significantly between the two groups. After the intervention, CD40L demonstrated a gradual increase in the study group and CD40L serum levels in this group were significantly higher compared to the control group; in parallel with the trend of aortic dilatation. CD40L could potentially act as biomarkers of the presence and development of infrarenal aortic aneurysms, but further studies with a larger number of animals are necessary.

Abdominal aortic aneurysm (AAA) is a lethal disease affecting a significant percentage of males over the age of 65, while it is rather infrequent in females [1-3]. Aortic dilatation and aortic aneurysm are defined as aortic diameter growths by less or more than 50% compared to normal aortic dimensions, respectively. AAA can lead to aortic rupture, a life-threatening event that even if it is urgently addressed it still carries significant post-procedural morbidity and mortality [4]. At present, AAA rupture is becoming less frequent as surveillance programs and non-invasive medical imaging (e.g. coaxial tomography – CT, ultrasound scan - US) assist in the early diagnosis and elective treatment of AAA or aortic dilatation [5-8]. AAA repair is considered only if the AAA is large (≥55 mm), symptomatic or rapidly growing (≥10 mm per year) [9]. Based on the current guidelines, small asymptomatic aneurysms or aortic dilatations are not subjected to annual follow-up imaging or elective repair, leaving these cases follow the natural course of the aneurysmal disease until they are either symptomatic or large enough to be electively repaired [10,11]. As a result, there is no cost effective and easy method to screen aortic dilatations until their dimensions grow significantly. Blood biomarkers could potentially fill in this role and provide the necessary prediction of significant aortic growth. The term biomarker is defined by World Health Organization as any substance, structure, or process that can be measured in the body or its products and influence or predict the incidence of outcome or disease [12]. To date, no definitive biomarker for AAA growth has been described, despite the rather big number of related studies [13-15]. CD40L is the ligand of the CD40 transmembrane protein and plays a significant role in the stimulation and regulation of the cellular immune response, through T-cell priming and activation of CD40-expressing immune cells. It has a significant role in both the inflammation and the atherosclerotic processes.

The aim of this study is to report on the potential predictive role of CD40L in aortic diameter growth and the development of AAA.

This protocol was approved by the General Directorate of Veterinary Services, National Bioethics Commission, according to Greek legislation regarding ethical experimental procedure, in compliance with the EEC Directive 86/609 and Act 2015/1992 and in conformance with the European Convention ‘for the protection of vertebrate animals used for experimental or other scientific purposes”. This study was performed at the Laboratory for Experimental Surgery and Surgical Research “N.S. Christeas” (European Ref. # EL 25 BIO 005). Animal handling and care was in accordance with the National guidelines for Ethical Animal Research and the Principles of the 3Rs (Replacement, Reduction and Refinement) [11]. All efforts were made to minimize suffering. Animals were housed in a specific pathogen-free environment with ad libitum access to water and food. Lighting conditions mimicked the daily variation of light in nature.

The murine model used in this study is a variant of the experimental in vivo model of aortic aneurysm development with PPE infusion, which was first developed by Anidjar et al. [16]. Our research team has previously published the used variation of the original experimental protocol [17].

Thirty-two wild-type male Wistar rats were recruited, weighted and then equally distributed in two groups: AAA and control (n=16 in each group). In the AAA group, animals were subjected to laparotomy under general anesthesia and their aortas were perfused for 5-15 minutes with a solution of 4.5 U/mL Type I porcine pancreatic elastase (PPE). The perfusion was performed under hydrostatic pressure of 100 mmHg. The aim of the perfusion was to dilate the aorta by maximum 50% of its original diameter and it was defined as T0. In a similar manner, the aortas of the control group were perfused with natural saline 0.9% solution without the effect of hydrostatic pressure. Each animal underwent two additional laparotomies on day 7 (T7) and day 14 (T14). The aim of these laparotomies was measuring the aortic diameter.

Blood sample collection was carried out through orbital sinus at T0, T7 and T14. CD40L serum levels were quantified using the ELISA technique (CD40L ELISA Kit, BluGene, China), and CD40L concentrations are reported as optical density (OD) values. We evaluated the correlation between CD40L and the development and progression of an AAA.

Histological studies were performed to analyze changes in matrix proteins. Van Gieson (VG) that stains collagen in red, nuclei in blue, and erythrocytes and cytoplasm in yellow was used. Aortic segments were removed and preserved in 10% paraformaldehyde before processing for embedding in paraffin blocks for classic histological examination.

Data are expressed as mean ± standard deviation (SD) for continuous variables. The normality of the distributions was assessed with Kolmogorov-Smirnov’s test and graphical methods. Between-group comparisons were performed using student’s T-Test and Mann-Whitney U test, where appropriate. Comparisons between multiple time points were performed using Repeated Measures ANOVA and Friedman’s test with Wilcoxon’s Signed Ranks test for post-hoc comparisons. Pearson’s correlation coefficient and Spearma’s rho were calculated in order to examine relationships between variables. Differences were considered significant if the null hypothesis could be rejected with >95% confidence (two-sided p<0.05).

Table 1: Animals’ weights at different time points for the study and the control groups 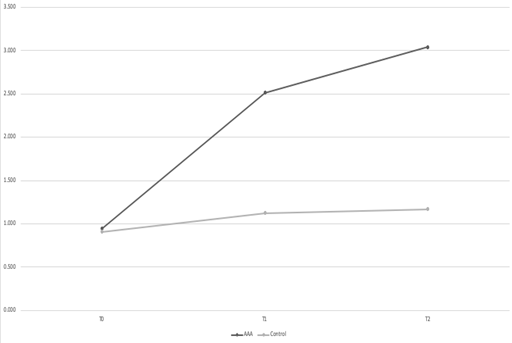 Figure 1: Diameter (in mm) of the infrarenal aorta for the study (AAA) and the control groups.

Figure 2: CD40L concentration of the study (AAA) and the control groups.

At T0, sample staining with EVG, revealed no pathology or structural change of the aortic wall (Figure 3A). A gradual destruction of elastic fibers in the aortic walls starts at T7 and becomes more evident at T14 (Figures 3B,3C). 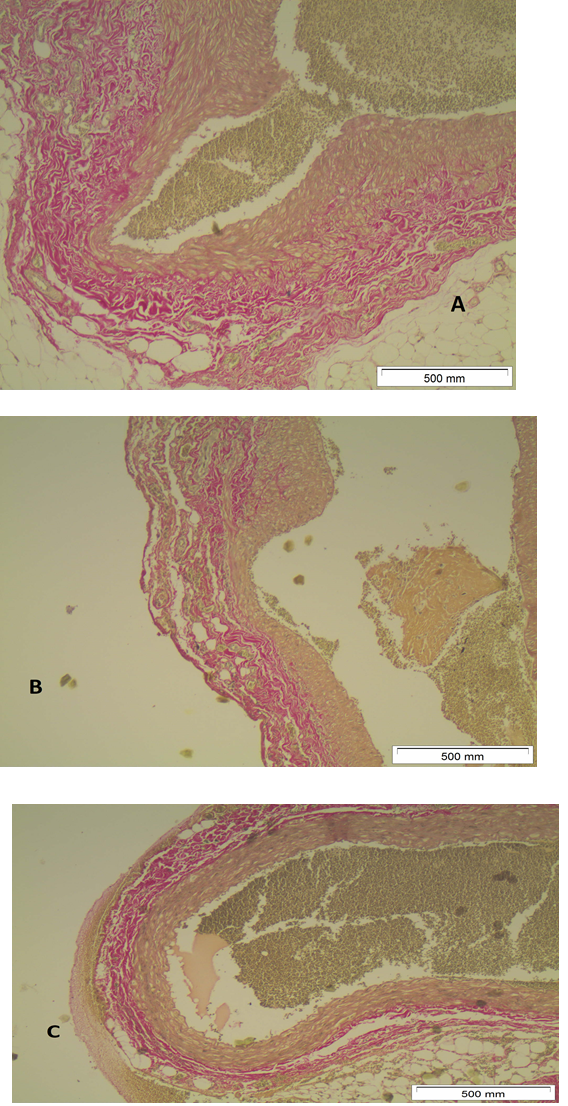 CD40L (also known as CD154) is the ligand of the CD40 transmembrane protein. CD40L plays a significant role in the stimulation and regulation of the cellular immune response, through T-cell priming and activation of CD40-expressing immune cells. CD40L is also a type II transmembrane protein with a molecular mass of 32 to 39 kDa [18]. The soluble form of CD40L preserves the properties of the transmembrane form [19,20]. CD40L is a member of the Tumor Necrotizing Factor superfamily of molecules and it consists of one α-helix loop in between two β-sheets, arranged in a “sandwich” fashion [21,22]. This structure allows CD40L to trimerize; a common property for all TNF ligand molecules. CD40L is mainly expressed on the surface of stimulated T and B lymphocytes, and platelets [23-25]. In the process of inflammation, CD40L is also expressed on mononuclear cells, natural killer cells, mastocytes and basophilic granulocytes [25]. This wide expression of CD40L demonstrates its important role in the cellular immune response. The interaction of CD40 and CD40L leads dendritic cells to mature, produce cytokines, and activate T lymphocytes. It also stimulates the antigen cross presentation by dendritic cells and it promotes antigen-antibody affinity [26,27]. It is well recorded that the CD40/CD40L signal pathway is important for the survival of cells in the presence of inflammation; a role that is affected in autoimmune diseases [27, 28]. CD40L is also involved in immunoglobulin class switching. The expression of TNF Receptor Associated Factors (TRAF) 1, 2, 3, 5 and 6 on the epithelial cells, macrophages and smooth muscle cells is regulated by proinflammatory cytokines, and amongst them by CD40L [29]. These molecules are important for both the normal structure of the blood vessels, but they are also important for the process of inflammation and atherosclerosis. Therefore, TRAF and CD40L signal pathway play an important role in these processes in blood vessels [30-33]. Apart from atherosclerosis, CD40L is also linked to atherosclerotic plaque complications and other atherosclerosis-related pathology, such as aneurysms [34]. It is also reported that the lack of CD40L and the consequent non-activation of CD40 protects individuals from the development of an aneurysm and its deadly complication – aortic rupture [35].

The selected animal model was technically successful, as it produced an infrarenal aneurysm in all the animals of the AAA group. This high rate of aneurysm induction as a result of PPE perfusion is already described in the literature and our results are in line with the published data [36]. At T14, the aortic diameter was significantly higher in the study group compared to the control group. In this group, a steep increase of the aortic diameter during the first seven postoperative days was observed. This increase was in parallel with an increase of the concentration of CD40L in a similar manner. CD40L concentration was significantly higher in the study group compared to the control group at both T7 and T14. The increase of the CD40L concentration between T7 and was statistically significant and it was followed in a similar manner by the aortic dilatation. At the bottom line, the two curves (CD40L concentration and aortic diameter) have a similar course. The fact that CD40L reaches statistical significance at T7 when aortic diameter reached statistical significance at T14 could mean that high CD40L levels may foretell further aortic dilatation. Of course, this is something to be explored further.

From these results, one could assume that CD40L is an analogue to the aortic dilatation and its higher concentration can predict a future aortic dilatation. This can be explained by the key role of CD40L in the mechanism of inflammation and T-cell mediated immune response, and the fact that inflammation of the aortic wall is the base on which the aneurysmal disease lies.

The present study has two weak points. First, the number of animals in each group is relatively small. Therefore, a larger study should follow in order to support our findings. Another weak point is that once a larger study on animals is completed and its evidence supports our findings, a similar study on humans should be undertaken in order to test whether these findings translate to human physiology. These additional studies should also focus on the threshold at which CD40L acquires a predictive role for AAA expansion.