Objective: Gorlin-Goltz syndrome is a rare autosomal dominant inherited syndrome, also known as “basal cell nevus syndrome’’. This rare disorder is caused by mutation in the patched tumor suppressor gene PTCH and located in chromosome 9q22.3q31, which functions as a component of the Hedgehog signaling pathway. It is characterized by multiple basal cell carcinomas, jaw keratocysts, falx cerebri calcification and skeletal anomalies. The syndrome was first described by Gorlin and Goltz in 1960, and has a wide clinical spectrum including ophthalmological, neurological, endocrine and genital pathologies, internal malignancies and mental retardation.

Methods: A 22-year-old male patient presented with a left-side spontaneous pneumothorax. After tube thoracostomy, prolonged air leak developed, and computed tomography was performed because of bullous lung. A patient with Gorlin-Goltz syndrome who developed spontaneous pneumothorax in the contralateral lung during clinical follow-up and underwent surgery is presented. The treatment and follow-up of this case are discussed in the light of literature.

Results: The NGS analysis results were compatible with the diagnosis of NBCCS (Gorlin-Goltz), and a novel heterozygous frameshift mutation c.1659delC(pS554Afs*11) (pSer554Alafs Ter11) in the PTCH1 gene causing a premature stop codon. The case was evaluated as pathogenic with high probability according to ACMG criteria.

Conclusion: This case report; describes for the first time a patient with NBCCS or Gorlin-Goltz Syndrome with basal cell carcinoma caused by a heterozygous frameshift mutation in exon 10 of the PTCH1 gene and was considered highly likely pathogenic according to the ACMG criteria. Therefore, our case; it is important because it is the first presented frameschift mutation in the world, which belongs to Gorlin-Goltz Syndrome.

Nevoid basal cell carcinoma syndrome (NBCCS) or Gorlin-Goltz Syndrome (GGS) is an autosomal dominant disorder with almost 100% penetrance and variable expression, with very rare multi-organ involvement. Gorlin syndrome is characterized by a wide variety of developmental abnormalities and a predisposition to a variety of tumors. In molecular studies, changes can be seen in many genes, especially the PTCH1 gene, where the most changes are sold, and the rate of occurrence varies between 1/50000-150,000 according to regions and races [1, 2].

First, in 1894, Jarisch and White described skeletal, central nervous system and skin findings in these cases [3]. In 1960, it was described as a syndrome by Gorlin and Goltz [4].

There are 5 main findings in GGS. These include bone anomalies, aggressive basal cell carcinomas (BCC), odontogenic keratocysts, ectopic calcifications, and pits seen in the hands and feet, ribs and vertebral bodies observed at an early age [5]. Approximately 60-70% of patients have multiple odontogenic keratocysts, which are characteristic signs of GGS [4].

The Patched 1 (PTCH1;OMIM 601,309) gene is the major NBCCS susceptibility locus and the PTCH1 is located on chromosome 9q22.3 and codes for a large transmembrane protein that regulates the complex sonic hedgehog (SHH) signaling pathway [6].

Hedgehog signaling is important in embryonic development and tumorigenesis, PTCH1 is a tumor supressor gene consisting of 23 exons [7]. As a result, malignancies occur. The main molecular defects associated with the Gorlin syndrome phenotype are due to mutations in the PTCH1 gene (OMIM # 601309) [7, 8].

This case was diagnosed as GGS with clinical, histopathological, radiological findings and genetic analysis and he carries a novel frameshift mutation in the PTCH1 gene. Our case is presented as the first case of bilateral pneumothorax in GGS and second case of GGS and bullous lung in the literature.

A 22-year-old male patient was admitted to our clinic with complaints of dyspnea and pain in the left hemithorax for 3 days. Physical examination revealed decreased respiratory sounds on the left hemithorax and upper zone. There was no history of trauma in the anamnesis.

Our patient's cardiologic examination revealed minimal tricuspid regurgitation, minimal mitral regurgitation and mitral valve prolapse. When the patient's history was questioned, it was learned that an excisional biopsy was performed on his back and anterior region of left thigh 1 year ago and the pathology result was basal cell carcinoma (Figure 1a). It was also learned that the operation was planned for the right mandibular keratocyst. Computed tomography (CT) guided radiographic examinations showed a well-circumscribed cystic appearance in the mandible (Figure 1b).

Figure 1: Pathological images of the patient

Genetic study was performed on suspicion of radiological and skin findings and the result was reported as GGS. The diagnosis is made according to clinical criteria (Kimonis Criteria) (Table1) and genetic ones. Taking advantage of next-generation sequencing technology, we applied whole-exome sequencing, we used a Miseq bench-top sequencer (Illumina, San Diego, CA, USA). The analysis of the whole-exome sequencing showed a novel heterozygous frameshift mutation NM_000264.4, c.1659delC(p.S554Afs*11)(pSer554AlafsTer11) in the PTCH1 gene (Figure 2, Figure 3). It was evaluated as pathogenic with high probability according to ACMG criteria. This variant was not listed in the Leiden Open Variation Database (https://databases.lovd.nl/shared/genes/PTCH1), this result was very important. Null variant (frame-shift), in gene PTCH1, for which loss-of-function is a known mechanism of disease (gene has 268 pathogenic LOF variants and gnomAD Loss-of-Function Observed/Expected = 0.0158 is less than 0.763), associated with Basal cell nevus syndrome (https://varsome.com/variant/hg19/NM_000264%3Ac.1659DELC?annotationmode=germlin).

This frameshift mutation causes premature stop codon that may cause a nonsense-mediated decay. Moreover, the muta­tion was likely a de novo mutation, as his parents were unaffected. 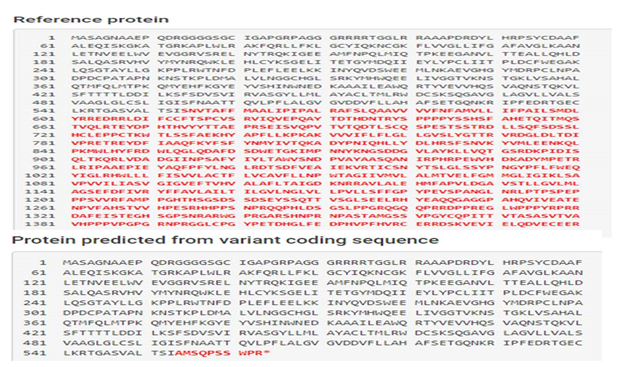 The patient underwent tube thoracostomy. Bulla ligation was performed  due to prolonged air leak and the drain was removed on the 7th postoperative day (Figure 1f). The patient was discharged on the 8th postoperative day according to the clinical and radiological follow-up. There were no problems related to the operation in the routine controls.

The patient was admitted to the emergency department of our hospital again with chest pain on the right 3 months later. Chest X-ray and thoracic tomographi showed partial pneumothorax on the right (Figure 1g). There was an emphysematous area in the apical right upper lobe and no significant bullae structure. After 3 days of oxygen therapy and medical treatment, the lung was completely enlarged and the patient was discharged.

The patient was admitted to our clinic one month after this treatment because of recurrent pneumothorax on his right and operated. He was discharged with no complications. Our patient is being followed without any problem.

Gorlin-Goltz syndrome, which shows autosomal dominant inheritance, is characterized by basal cell carcinomas, skeletal anomalies, odontogenic keratocysts and affects many systems. In addition, occipitofrontal diameter increase, epidermal cysts in the skin, ocular hypertelorism, calcified ovarian fibromas, calcified falks cerebri, spina bifida oculta, rib anomalies, hyperpneumatization of paranasal sinuses are common findings. It is mostly seen between the ages of 5-30 and usually occurs at the beginning of the second decade.The jaw lesions are mostly composed of multiple keratocysts. Therefore, clinical and radiological examinations in the presence of multiple keratocysts, which is one of the first symptoms of the syndrome, will provide early diagnosis and treatment of possible skin tumors [1]. Keratocysts have high recurrence potential (14-65%) [9]. Only marsupialization or enucleation is not sufficient in their treatment and it has been reported that bone curettage should be performed [10].

Cohen et al. (2010) reported that the PTCH1 gene is a member of the protein patched homolog 1, which encodes the Patched family, which acts as a receptor for the hedgehog signaling pathway, and the hedgehog signaling pathway plays a role in many physiological processes during embryonic development, particularly morphogenesis. The PTHC1 gene is a tumor suppressor gene, and Knudson's (1971) two-hit hypothesis also occurs on this gene. The first hit affects the germline cells, while the second hit causes rare somatic mutations and cancer [11]. It has been reported that developmental defects associated with Gorlin Syndrome arise through a two-beat mechanism and result from homozygous inactivation of the gene of interest in an early progenitor cell of the relevant tissue. Mutations involving both alleles of the PTCH1 gene; it occurs as a result of exposure to UV or X rays from environmental factors, chemical carcinogenesis or random genetic changes and causes postnatal sporadic BCC [12]. In the area where our patient lives, there is aspest substance in the soil and we can interpret it as possibly acting as a chemical carcinogen.

In summary, the present report describes, for the first time, an NBCCS or Gorlin-Goltz Syndrome patient with basal cell carcinoma caused by a heterozygous frameshift mutation in exon 10 of the PTCH1 gene and it was evaluated as pathogenic with high probability according to ACMG criteria. Radiological, genetics, dermatological and neurological evaluations are also useful. Genetic tests play an important role in early diagnosis, treatment and follow-up of the disease.

The authors declare that the research was conducted in the absence of any commercial or financial relationships that could be a potential conflict of interest.

Variant information has been uploaded to the LOVD-CDT1 database.