Method: The study was conducted at the Centre of Pneumology in Donaustauf, Germany. Employees that qualified for vaccination against COVID-19 and who were willing to be vaccinated with Cormirnaty® (second dose) were asked to participate in this study. Participants were asked to measure saturation rate three times a day for seven days after vaccination.

Conclusion: A mild but significant decline in satu-ration could be detected. As Cormirnaty® comprises mRNA for encoding peptides of the spike protein the decline in saturation rate might hint that molecular mimicry is an important element of COVID-19.

Until now COVID-19 led to more than 100 million confirmed cases and 2.5 Million deaths. Infection with SARS-CoV2 is in many aspects different from classical respiratory infections. Pathogenesis is poorly understood, but the host immune response is thought to play a major role in the pathophysiological effects of organ failure in COVID-19 patients [1]. Previous corticosteroid use is no important risk factor for a poor outcome [2]; in hypoxemia, dexamethasone even showed to be beneficial [1]. Infection control in health care settings was broadened by the availability of different vaccinations lately [3-5]. Vaccination against SARS-CoV2 plays an important role amid pandemic control. Cormirnaty® was the first available vaccine in Europe that contains mRNA encoding the spike protein of SARS-CoV2 [3].

Interestingly, lately an enormous peptide commonality and thus molecular mimicry between SARS-CoV2 spike protein and human proteins could be demon-strated [6]. Molecular mimicry could be attributable to the SARS-CoV2 associated illness. In the pandemic H1N1 influenza vaccination campaign in 2009-2010 an increased incidence of narcolepsy was seen in many countries [7]. Molecular mimicry between the H1N1 influenza virus and endogenous proteins respectively Pandemrix® and endogenous proteins is suspected to be the reason of this increased incidence [7, 8]. So far saturation rate was not examined in patients who received Cormirnaty® [3, 9]. A decline in saturation rate would be suggestive that main reason for respir-atory failure in patients with COVID-19 is the immune response to the spike protein. To our knowledge no decline of saturation rate was detected after applic-ation of other vaccines. This study was performed to document real-life adverse effects and to examine whether an impact of the vaccination on the respire-tory system occurs.

The study was conducted at the Centre of Pneumology in Donaustauf, Germany. The hospital is a quartiary care provider for pneumology, where patients from the eastern region of Bavaria are seen for specialized care. Employees that qualified for vaccination against COVID-19 and who were willing to be vaccinated were asked to participate in this study. Participants had to fill out a questionnaire about adverse events after the second vaccination with Cormirnaty®, general health information was also obtained. Employees were asked to measure saturation rate three times a day at rest after second vaccination. According to guideline of our local ethics committee at the University of Regensburg no approvement for these kind of observation studies is necessary. The study was cond-ucted between 25.01.2021 and 10.02.2021

149 employees received the second dose of Cormir-naty® during the study period, of these 73.2% (n=109) were willing participate and did submit the results of the questionnaire and the saturation rate. Due to missing values, n=106 participants (84 female, 22 male) were included into the final analysis. Mean age was 49.6 ± 9.1 years, 22 were smokers, pulmonary disease was reported by twelve, eight of them reported to have asthma bronchiale. 61 did receive the seasonal influenza vaccination before. 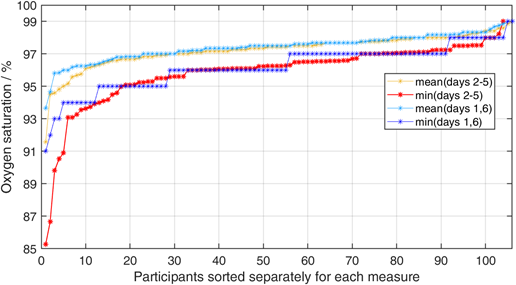 Figure 1: Mean and minimum oxygen saturation in baseline phase (day 1,6; blueish curves) and post vaccination phase (day 2-5; orange/red curves). All curves were sorted in ascending order. The red curve shows the oxygenation drops for each participant during days 2 to 5.

Our study has many limitations. First of all, we had no control group without vaccination and we did only measure saturation rate and not oxygen partial press-ure; furthermore, it is a single center study and the number of employees we examined is rather small; on the other hand, this is the first study at all analysing saturation rate after vaccination with Cormirnaty®.

Low saturation rate is not described in the Phase 1 study of Cormirnaty® and not known as adverse event of other vaccinations. The mild, but obvious decline in saturation rate might be no typical side effect but give a hint to the reason of hypoxemia and pathophysiology in ARDS in SARS-CoV2. Further prospective studies are needed.

According to guideline of our local ethics committee at the University of Regensburg no approvement prior the beginning of this kind of observation study was necessary.

The dataset analyzed during the current study is avail-able from the corresponding author upon reasonnable request.

Dr. Hitzenbichler reports grants from Gilead Sciences and MSD, outside the submitted work.

Dr. Pfeifer, Dr. Loew and Dr. Hinterberger have nothing to disclose.