Methods: We performed a case-control study including newborns admitted in the neonatal intensive care unit. Respiratory syncytial virus related respiratory infections were confirmed by the Respi-strip test. Clinical and biological data were collected from medical records and analyzed with Epi Info7.

Each year 1.5 million children under the age of 5 years die from pneumonia and respiratory syncytial virus (RSV) is the number one cause of bronchiolitis and pneumonia in children under 1 year of age [1, 2]. The preterm newborn is at high risk of developing life-threatening RSV respiratory infections [2]. ?mmaturity of the immune system in premature and very young infants and the smaller caliber of their airways are both thought to contribute to their susceptibility to severe lower respiratory tract infection (LRTI) [3, 4].

Vitamin D plays an important role during neonatal period through direct effects on newborn immune system. Its receptors are widely expressed amongst cells of the innate and adaptive immune system, including dendritic cells and macrophages. When stimulated, these cells produce human cathelicidin protein (HCAP-18), which augments the microbial killing capacity of phagocytes and activates anaphylactoid factors that promote neutrophil and monocyte migration to the site of infection [5]. In addition, vitamin D also suppresses the release of pro-inflammatory cytokines and chemokines such as IL-1β, IL-6, IL-8, and TNF-α [6]. Thus vitamin D deficiency has been hypothesized to be a culprit in the risk and severity of acute LRTI in both adults and children. However, in the literature, there are few studies examining the relationship between vitamin D levels and LRTI-associated sepsis in newborns and without clinical signs of rickets. This study aimed to assess relationship between serum vitamin D level and the occurrence of LRTI among Turkish infants.

This retrospective study was conducted in neonatal intensive care unit. The research procedure was approved by the ethical committe (Report number: 2019.143.09.03). In a case-control study, we included nine infants admitted in neonatal intensive care unit (NICU) between in 2018-2019 with the diagnosis of RSV-related severe LRTI and nine controls who presented similar characteristics but without respiratory diseases.

Statistical analyses were performed using SPSS Statistics version 15.0 (IBM). Descriptive statistics were reported as percent, mean ± standard deviation, median, and ranges (min-max) as appropriated. To compare clinical and biological parameters between cases and controls, we used Fisher exact test, Mann Whitney U and Khi-square tests as appropriate. The relationship between two sets of data was analyzed by Spearman's rank correlation test. All comparative tests were 2-tailed and p ≤0.05 was considered as significant.

Mean age of the 18 patients included in the study was 23.72 d and only 33% were female. The anthropometrical and clinical characteristics were comparable between newborns in the case and the control groups (table 1). The duration of prodromal symptoms was between 1-4 days before admission. In addition to symptoms of upper respiratory infection, cough, wheezing, tachypnea, decreased suctioning, fever, apnea (two cases), hypotonia (two cases) were present. As a source of transmission, there were signs of upper respiratory tract infection in the parents/siblings. The duration of gestational period ranged from 33 to 41 weeks. Two babies were born with low birth weight and two others were born prematurely. All cases were fed with breast milk, and two infants were given supplementation with formula in addition to breast milk. Only 5 babies had passive smoking exposure among the newborns with LRTI. All newborns with LRTI presented vitamin D deficiency and 11.1 % of controls had normal vitamin D status (figure 1). Median serum 25-OH vitamin D level was significantly lower in newborns with severe LRTI than in controls (6.4 ng/ml and 18.3 ng/ml respectively in cases and controls, p <0.01). Table 2 presents the mothers’ characteristics. Median vitamin D level was 7.6 ng/ml (3.8-14.6) in mothers of cases and 21.5 ng/ml (9.9-30.1) for the controls’ mothers. There was a significant correlation between newborn’s serum vitamin D level and the mother’s one among case and control gs (cases: r = 0.88, p = <0.01, controls: r = 0.77 p = 0.02). All newborns had normal calcium, phosphorus, and alkaline phosphatase levels. However, any mother did not receive adequate vitamin D supplementation during pregnancy. However, babies with vitamin D deficiency and their mothers were given vitamin D at the treatment dose. Two patients had Staphylococcus epidermidis in blood culture and one patient had Enterobacter cloaca in tracheal aspirate culture. Interstitial infiltration was detected on chest radiographs of patients with LRTI due to RSV. Echocardiography revealed secundum atrial septal defect (ASD) in two patients and patent foramen ovale (PFO) in one patient. All RSV antigen-positive infants were hospitalized in an isolated room. For the management of patients with LRTI, mechanical ventilation support, oxygen, TPN, iv fluid, antibiotic and b2-agonists were used. Two patients required advanced mechanical ventilation with High-Frequency Ventilation (HFO). Four patients required intubated mechanical ventilation during 3 to 11 days. This duration was inversely correlated to vitamin D level (r=-0.65 ; p=0.02). Nine patients required nasal CPAP and total parenteral nutrition support was given to seven babies. 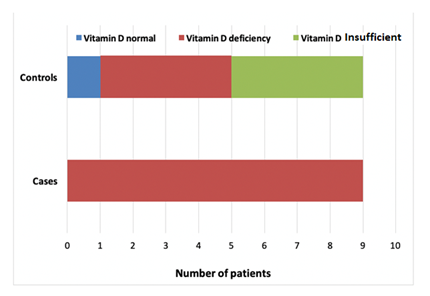 Figure 1: Vitamin D status in newborns with and without low respiratory tract infection

Vitamin D plays a key role in bone metabolism through regulation of calcium and phosphate homeostasis since early life and may also play an important role in immune system regulation. Previous studies had demonstrated association between, 25-OH vitamin D level in cord blood and subsequent risk of developing respiratory infection in infants [7-9]. However, other authors did not find any relationship between vitamin D and LRTI among newborns [4]. In this study, serum 25-OH vitamin D was lower in infants with severe RSV-related LRTI and their mothers. Even though newborns and mothers in the control group had vitamin D deficiency, their serum levels were slightly higher. Also, Beigelman et al. [4] reported a high rate of vitamin D deficiency in infants and mothers with LRTI.

The high prevalence of vitamin D deficiency in our patients was attributed to lack of vitamin D supplementation during pregnancy, the dressing habits of Turkish women and low exposure to sunlight during winter season. Vitamin D deficiency can hamper its immunomodulatory effects through direct effect on cell proliferation, differentiation and apoptosis of T lymphocytes and B lymphocytes [10]. Randolph et al. [11] found that children hospitalized with RSV-related bronchiolitis were more likely to carry the GC1s haplotype, which is associated with higher levels of vitamin D binding protein, and lower available 25-OH vitamin D. This may explain the high incidence of infection in our cases group where all participants had low serum vitamin D level.

Furthermore, a strong inverse correlation was found between the intubation time and vitamin D level of newborns in the case group. Similarly, Fairchok et al. [12] found that babies with vitamin D insufficiency had a significantly longer duration of hospitalization and also required more oxygen support. The World Health Organization recommends vitamin D supplementation because to help reducing incidence and severity of acute LTRI, as well as all-cause mortality in newborns particularly in populations with low exposure to sunlight [13,14]. Camargo et al. [15] reported that the frequency of wheezing decreased in asthmatic infants of whose mothers received vitamin D supplementation during pregnancy and during the first 3 years of life.

Our results suggest that severe LRTI is associated with lower vitamin D levels among newborns admitted in NICU. Therefore correction of vitamin D deficiency with supplementation might have a significant impact on prevention and treatment of postnatal life threatening respiratory infections in newborns. Further interventional studies in larger samples are needed to confirm the efficacy and efficiency of such a strategy.

Ethics approval and consent to participate: The research procedure was approved by the ethical committe (Report number: 2019.143.09.03).

Consent for publication: Not applicable.

Competing interests: The authors declared no conflicts of interest with respect to the authorship and/or publication of this article.

Funding: The authors received no financial support for the research and/or authorship of this article.

ST planned the study, ST and EA collected the data, ST and EA performed the statistical analysis, ST and EA analyzed the literature, EA was a major contributor in writing the manuscript study. Two authors read and approved the final manuscript.