Multiple Myeloma may have extraosseous manifestations in the cranial region. It may be a solitary intracranial tumor (extramedullary plasmacytomas without any other signs of multiple myeloma) or intracranial disease may be a part of generalized disease. We report herein a 65-year-old multiple myeloma patient with the involvement of different regions of brain parancyhma with spontaneous intratumoral hemorrhages. It is an unusual recurrence presentation and unusual situation that intracranial involvements are both with and without dural attachment and all of them have intratumoral hemorrhages.

Multiple Myeloma may have extraosseus manifestations in the cranial region. It may be a solitary intracranial tumor (extramedullary plasmacytomas without any other signs of multiple myeloma) or intracranial disease may be a part of generalied disease [1]. We report herein a multiple myeloma recurrence after first line therapy with the involvement of different regions of brain parancyhme with spontaneous intratumoral hemorrhage.

A 65-year-old man admitted to the department of hematology of our hospital with the complaints of fatigue and dyspnea. His medical history revealed that the patient was referred firstly to a research institute in India in April 2014 with bone pains and weakness. On investigations he was found to have anemia, lytic lesions on skeletal bones and slightly raised serum creatinine level. He was diagnosed with Multiple Myeloma stage 3 based on bone marrow aspiration which showed infiltration of 70% plasma cells and positive M-spike in the serum. The patient then has been started on treatment of Bortezomib and Dexamethasone. He has also received palliative radiation to the involved areas of the bone. After induction treatment he was referred to a transplantation center in Turkey for autologous transplant on June 2014. Bone marrow biopsy performed there and revealed 10-15% infiltration of monoclonal plasma cells so that he has been started Bortezomib, Thalidomide and Dexamethasone treatment.

While he was going on his treatment, the patient was admitted to our department with fatigue, fever and dyspnea on Jan 2015. There is bilateral pulmonary infiltration on chest x-ray and comp?ted tomography (CT) scan (Figure 1). Because of dyspnea, tacypnea and respiratory failure, the patient admitted to intensive care unit and empirical piperacillin-tazobactam and trimethoprim-sulphametoxasole antibiotherapy was started immediately due to suspicion of hospital acquired pneumonia and Pneumocytis carinii infection. Later we demonstrated Meticilin-resistant Staphylococcus aureus (MRSA) in culture of deep tracheal aspiration and started teicoplanin treatment. He clinically improved with these antibiotics. But on 10th day of treatment, we noticed altered mental status, confusion and lower extremity weakness/numbness. We performed brain imaging with CT scan and MRI. The imaging studies both revealed 5 masses with surrounding edema and intratumoral hemorrhages. The diameters were 29x21 mm in right temporal lobe, 31x15 mm in left frontal lobe, 57x23 mm in left parietal lobe, 26x17 mm in left parietal lobe and 15 mm superior to it (Figure 2). Four of them were intraparencymal masses with cranial and dural attachment, one of them without dural attachment. We has started dexamethasone treatment and referred the patient to another center for radiation therapy to the brain. 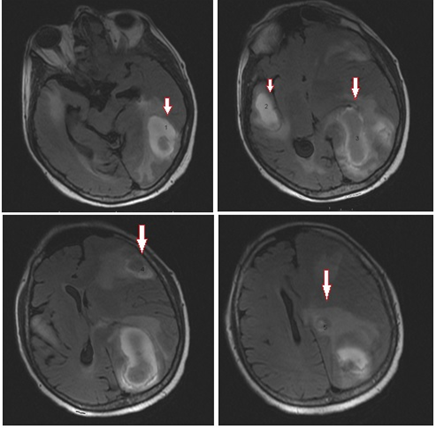 Plasma cell neoplasms account for 1% of malignant tumors, including multiple myeloma, solitary plasmacytoma and syndromes caused by tissue immunoglobulin deposition [2]. Patients with multiple myeloma often have neurologic complications [3]. These include peripheral neuropathies, spinal radiculopathies, cranial nerve palsies, spinal cord compression and metabolic encephalopathies. The course includes vertebral compression fractures, base of skull and other bony involvement, metabolic imbalance, hyperviscosity syndromes and amyloidosis [4]. Invasion of central nervous system in multiple myeloma is rare, either as presumed intracerebral metastases or as Leptomeningeal Myelomatosis [5]. We noticed confusion and extremity weakness as a first sign in our case during antibiotic treatment for pneumonia and then suspected intracranial involvement. This is an unusual recurrence presentation.

A solitary plasmacytoma is a located plasma cell neoplasm that usually affects bone (bone plasmacytoma) and rarely involves other tissue (extramedullary plasmacytoma) [6]. In 80% of cases, extramedullary plasmacytomas are located in the upper respiratory tract, rarely they may affect the gastrointestinal tract, lymph nodes, bladdder and central nervous system (CNS) [7]. Solitary plasmacytomas involving the CNS usually result from the spread of malignant plasma cells from dura mater or skull [2]. Primary intraparenchymal brain plasmacytomas without dura mater or skull involvement have been reported extremely rare [8]. Because plasma cells are not found in the brain tissue in normal conditions, an isolated intraparenchymal involvement is difficult to explain in the absence of contiguous dural or bone lesions [9]. Also spontaneous intratumoral hemorrhage with intracranial plasmacytoma is also extraordinarily rare [10]. We saw all of these extraordinary situations all together in the current case.