1. Introduction
Foreign bodies of the respiratory tract are still one of the most important issues of pulmonology and thoracic surgery. While a big sized food can cause obstruct the trachea and cause sudden death due to talking ol laughing while eating (Cafe Coronary), even a small bread crumb can cause a hypoxic crisis and death due to laryngeal spasm [1]. The great majority of foreign body aspirations, an emergency that can be fatal, are seen in children [2]. Foreign body aspirations can be seen in children, in the elderly, in those who use alcohol and sedative drugs, in neurological disease, epileptic seizures, head trauma, general anesthetized cases, and rarely in healthy adults. Tablet forms of medicines, small metal or plastic parts, foods, teeth, turban needles, tracheostomy cannula are reported foreign bodies in the literature [1,2]. In our country a drug foil aspiration was reported, which was a rare and inserting case [3]. In this case report, we aimed to present an adult patient with foreign body aspiration who received treatment for COPD at an external center and applied to our clinic.

2. Case Presentation
A 44-year-old woman with a history of cough, sputum, shortness of breath that lasted for about 6 months, and recent increase in complaints indicated that she didn’t have any complaint before. The patient aspired her turban needle while holding it between her lips, had a sudden crisis of wheezing, cough and hoarseness, her symptoms settled down after swallowing. She initially did not apply to a doctor. Approximately 6 months later, the patient was given bronchodilator medication for COPD. In spite of long-acting beta-2 agonist and inhaled corticosteroid treatment, she had persistent complaints of breathlessness, wheezing and cough. The patient was evaluated after the referral to our pulmonology polyclinic. Physical examination of the patient revealed a blood pressure of 110/70 mmHg, pulse rate of 75/min, respiration rate of 25 / min, oxygen saturation (room air) of 92% and a fever of 36.7. Localized wheezing was detected trough auscultation in the right lung lower segment. The chest X-ray showed a homogeneous opacity in the lower right section. Hemogram and biochemical findings showed no abnormality other than leukocytosis. Wbc was 13.700. Pulmonary functions tests showed mild obstruction:
FEV1: 1,86 L (64%), FVC:1,99 L (69%), FEV1/FVC: 68,5%, PEF: 3,65 (67%), FEF25-75: 1,55 L (66%). The respiratory function test was planned to confirm patient's pre-existing COPD. Pulmonary function test was evaluated according to Global Obstructive Lung Disease (GOLD) criteria [3]. Results were found to be consistent with COPD. Flexible bronchoscopy was performed for diagnostic purposes. 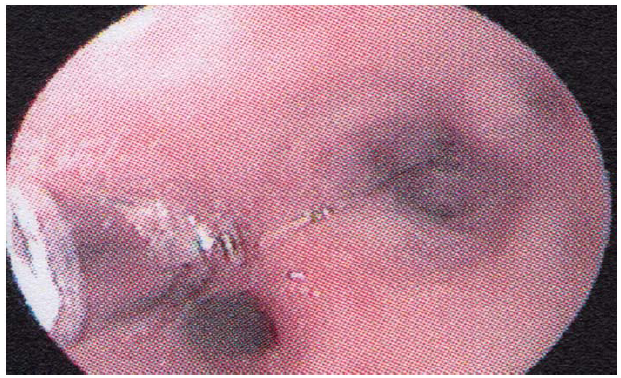