Background: Hepatitis A and hepatitis B are virological diseases which cause serious health problems worldwide and are closely related with social, economic, and cultural status of countries. Their seroprevalences change with varying social conditions. The purpose of our study was to evaluate hepatitis A and B encounter rates and anti-HAV IgG and Hbc IgG serological parameters in patients admitted to our clinic.

Conclusion: Anti-HAV IgG positivity rate in our study was 97.4%. Isolated anti Hbc IgG positivity rate was 3.7%. Both hepatitis A and hepatitis B encounter rates were detected to increase with age. High anti-HAVIgG positivity in our society warrants careful reviewing of our food and water resources. Moreover, informing public about contagiousness of hepatitis and implementing vaccination programs in a controlled fashion are among precautions that should be practiced.

Hepatitis A and hepatitis B are virological diseases which cause serious health problems worldwide and are closely related with social, economic, and cultural status of countries. it is accepted that the clinical picture of viral hepatitis was first defined by Hippocrates. HbsAg (Australia antigen) was defined by Blumberg in 1963 and hepatitis A was defined by Finstone in 1973 [1, 2].

Hepatitis A is a nonenveloped, positive polarity RNA virus from Picornaviridae family with a size of 27 nanometers and it has a capsid in protein structure [3, 4]. Hepatitis A virus stays alive for a month in a humid environment at 25-42°C. its incubation period is 15-50 days and main transmission way is fecal-oral route [4]. Hepatitis A was grown in cell culture in 1979 and since then various vaccines have been produced [4, 5]. Since 1992 safe and effective inactive hepatitis A vaccines have been used worldwide, especially in developed countries [6]. World Health Organization (WHO) classifies countries as very low, low, medium, and high endemic regions according to hepatitis A seroprevalence and recommends hepatitis A vaccination in very low, low, and medium endemic regions [5]. Annually, 1.5 million new cases of hepatitis A are reported worldwide and our country is considered medium endemic regarding hepatitis A [5, 6]. Hepatitis B is an enveloped virus from Hepadnaviridae family, which has a double helix, circular DNA and a diameter of 42 nanometers. it causes infection only in human hepatocytes. Worldwide around 400 million people are thought to be chronically infected with HBV [7]. Hepatitis B core antibody igG (anti-Hbc igG) is considered to be the most sensitive indicator of a previous HBV infection [8]. For Hepatitis B infection, HbsAg and anti-has negativity and anti-HBc igG positivity in serum samples is called 'isolated anti-HBcigG positivity [9]. introduction of effective Hepatitis B vaccines since the early 1980s has been very important to reduce cirrhosis and hepatocellular cancer risk due to hepatitis B in regions where hepatitis B is high or medium endemic [7]. in our country, every newborn is routinely vaccinated for hepatitis B virus since 1998.

To see the differences in hepatitis A and hepatitis B prevalences along with changing social conditions. The purpose of our study was to evaluate encounter rates for hepatitis A and B in patients admitted to our clinic, according to age and sex and report data about our region. in addition, we wanted to evaluate whether anti-HAV igG and anti-Hbc igG positivity which are lifelong indicators for encounters with hepatitis A and hepatitis B are only innocent indicators or they have effects that can be associated with inflammation. To answer such questions we tried to reveal the values of liver transaminases in patients with anti-HAV igG and isolated anti-Hbc igG positivity.

Biochemical tests of the patients included in our study were studied using Mindray BS2000M autoanalyzer and Mindray kits in accordance with instruction manual of the producer company. ELiSA tests (HbsAg, anti-Hbs, anti-Hbc igG, and anti-HAV igG) were studied using Cobas 6000 e601 autoanalyzer and Roche kits with chemiluminescence method in accordance with the instruction manual of the producer company. For numerical analyses in the study SPSS v22.0 software was used. independent variable t-test or one-way ANOVA method was used in the comparison of continuous variables. The Z-test was applied for the comparison of the percentages between the two groups.

Table 1: Viral serology parameters in a 6 month period between February to July 2017.

The patients were evaluated by dividing into ten-years age groups. Over the age of 40 anti HbcigG positivity rate increased to 14.1%. Anti-HAV igG positivity was 92.1% in 16-29 age groups while it was achieving 100% over 50 years (Figure 2 and Figure 3). 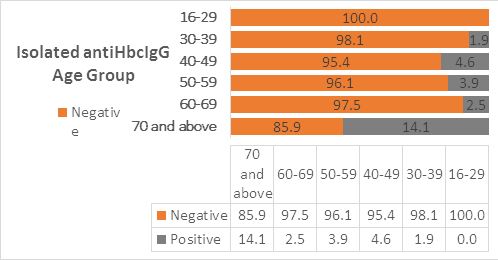 Evaluation of liver transaminases and cholestasis enzymes according to anti-HAV igG and anti-Hbc igG positivity (Table 2).

Table 2: Evaluation of liver transaminases and cholestasis enzymes according to anti-HAVigG and anti-Hbc igG positivity.

7. Ethics Approval and Consent to Participate