HNL Dimer- A Specific Biomarker of Neutrophil Activity - In Sepsis and Antibiotics Monitoring. A Mini-Review

Sepsis is a major burden to society and our health care systems. Early detection and treatment are keys to the improvement of the outcome of patients with sepsis with lower morbidity and mortality. We show in this review the potential usefulness, and superiority to current biomarkers, of plasma measurements of HNL Dimer in the monitoring of antibiotics in patients with sepsis. Future studies should be initiated to confirm this important aspect of sepsis management.

Sepsis is a major burden to society and our health care systems. The global incidence is estimated by WHO to be about 50 million/year with 11 million deaths [1]. In the USA and most other developed countries sepsis is the costliest disease with estimated annual costs in the USA of about 24 billion $US [2] and in Great Britain of about 11 billion £ (WHITEWATER CHARITABLE TRUST The Cost of Sepsis Care in the UK Final Report, 2017). Early detection and treatment are keys to the improvement of the outcome of patients with sepsis with lower morbidity and mortality. Early detection relies on the demonstration of bacterial growth and partly on the detection of raised concentrations in blood of biomarkers such as CRP, Procalcitonin, Heparin-Binding Protein and others. However, none of these biomarkers fulfil the expectations of the caring doctor since the discrimination between sepsis and other systemic inflammatory disease (SIRS) mostly is inadequate with great overlap in plasma concen-trations and hence specificities and sensitivities in the range of 70-80% at the most [3-8]. Other important aspects of sepsis care are estimation of prognosis and the monitoring of adequate antibiotics treatment [9-13]. The latter is a great challenge since the septic patients very often are multi-sick having other complicating diseases that may affect biomarker levels. Also, the pathophysiology of sepsis is comp-lex although the key player is the neutrophil granulocyte and its role in the eradication of the causing agent when the sepsis has a bacterial cause, which is the case in the vast majority of sepsis cases.

On activation neutrophils secrete a number of granule proteins, which can be measured in bodily fluids. One of these proteins is HNL (Human Neutrophil Lipocalin) also known as NGAL (Neutrophil Gela-tinase Associated Lipocalin) and Lipocalin 2. HNL exists in several forms i.e. the monomeric form with a molecular weight of 22 kD, a dimeric form of 45 kD and as heteromeric forms at >90 kD of which one form is a complex between HNL and MMP9 (Gelatinase) [14, 15]. The origins of these forms are neutrophils and/or epithelial cells. The neutrophil produces and secretes all of these forms whereas epithelial cells only produce and secrete the monomeric form. Thus, the presence of the dimeric form in any human material, blood, urine, feces etc. indicates the presence and activation of neutrophils. We developed an HNL ELISA based on two of our monoclonal antibodies, a combination of antibodies that theoretically only recognizes epitopes in the dimeric form of HNL. This assumption was confirmed by the fact that the ELISA only detected the purified dimeric HNL and not at all purified monomeric HNL (Figure 1), hence the name HNL Dimer ELISA.

The HNL Dimer ELISA has been used in several studies to indicate the activation and involvement of neutrophils in the particular process. In a recent study on COVID-19 patients the assay was used to investigate the role of neutrophils in the development of AKI (Acute Kidney Injury) [16]. Indeed, the activities of neutrophils as measured by the HNL Dimer ELISA were closely related to the outcome of the COVID-19 patients in terms of severe AKI and survival. Thus, the relative risk of acquiring severe AKI was 8.99 (95% CI 2.91-31.81) times greater in those patients having plasma HNL Dimer above 13.2 mg/L at admission to the ICU as compared to patients with concentrations below the cut-off. The relative risk of 30-day mortality was 4.60 (95% CI 1.39–16.91) times higher in patients above that cut-off. A close relation of increasing plasma concentrations of HNL Dimer to increasing SOFA scores further emphasized the predictive potential of this biomarker in patients with SARS-CoV-2 infections.

In order to reflect the involvement of neutrophils in sepsis we measured plasma concentrations of HNL Dimer in the Bio-x [17, 18] and PEAK [19-21] studies. We show in figure 2 the distribution of HNL Dimer in plasma of Bio-x patients with sepsis at admission to the hospital but before antibiotics treatment. On average the concentrations were 5-10 times higher in patients with sepsis when compared to the concentrations found in healthy people. The distinction of plasma concentrations of HNL Dimer between bacterial sepsis and viral pneumonia/influe-nza is shown in the figure. The overlap in HNL Dimer concentrations was low, which is also reflec-ted by the very high AUC ROC of 0.95 and the sensitivity and specificity given by the Youden index of 13.9 mg/L of 81% and 94%, respectively. The diagnostic performance, however, was very similar to plasma concentrations of PCT, but somewhat higher than those of CRP. The distinction between sepsis and other serious bacterial infections such as bacterial pneumonia is also shown in the figure. Here we see a somewhat greater overlap and translated into ROC analysis the AUCs were 0.81 and 0.80 for HNL Dimer and PCT, respectively. In this regard the performance of CRP was clearly inferior (0.65).

In the Bio-x study the results were from patients with microbiologically confirmed diagnosis only and samples were obtained before start of antibiotics treatment. These are important points in the evalu-ation of the diagnostic and predictive performances of the biomarkers, since the neutrophil biomarkers in particular, as will be shown below are very sensitive to antibiotics treatment and will normalize rapidly by adequate treatment. Therefore, the evaluation of the diagnostic or predictive performances days after start of antibiotics treatment will most likely underes-timate the performances of such biomarkers. From the Bio-x study we conclude that the diagnostic performances of HNL-Dimer and PCT are quite similar when estimations are based on admission data and samples from antibiotics naïve patients. The PEAK study followed, twice daily during the length of their stay, a large number of patients (n=198) admitted to the ICU [19]. Of these patients, 144 were allocated to the infection-group of which 59% were diagnosed as having sepsis and the rest (41%) as having SIRS (Systemic Inflammatory Response Syndrome). The plasma concentrations of HNL Dimer were highly raised at admission day to the ICU in the whole cohort as compared to healthy people (p<0.0001), but with a significant difference (p=0.02) between patients with SIRS and sepsis. Similarly, the PCT concentrations were highly raised as compared to healthy people, but with a larger difference between SIRS and sepsis (p=0.0005).  The SOFA score is a much-used score for the prediction of outcome of sepsis. As shown in figure 3 the plasma concentrations of dimeric HNL in sepsis patients with SOFA score of more than 7 at sepsis day 0 were significantly higher (p=0.03), whereas PCT and CRP concentrations were not statistically significantly related to the SOFA score. Thus, the association to outcome in sepsis of HNL Dimer seemed somewhat higher than for the other two biomarkers. 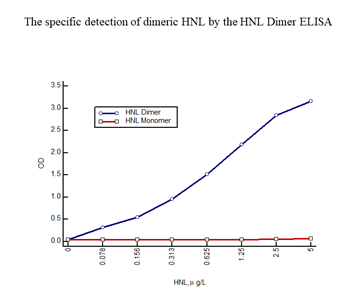 Figure 1: The measurement of purified native HNL by the HNL Dimer ELISA. Only the dimeric form of HNL was detected. 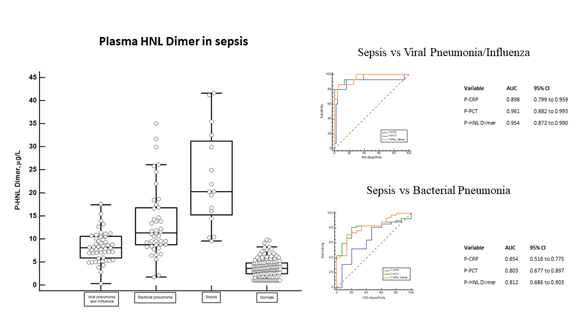 Figure 2: The left panel shows the plasma concentrations of dimeric HNL in sepsis as compared to the concentrations in plasma from patients with viral pneumonia/influenza, bacterial pneumonia and healthy non-infected controls. The top right panel shows ROC curves of sepsis vs viral pneumonia/influenza and the AUCs of the respective biomarker. The lower right panel shows the ROC curves of sepsis vs bacterial pneumonia and the AUCs of the respective biomarker. All samples were obtained before antibiotics treatment and the diagnosis was verified and confirmed by microbiological and clinical results. 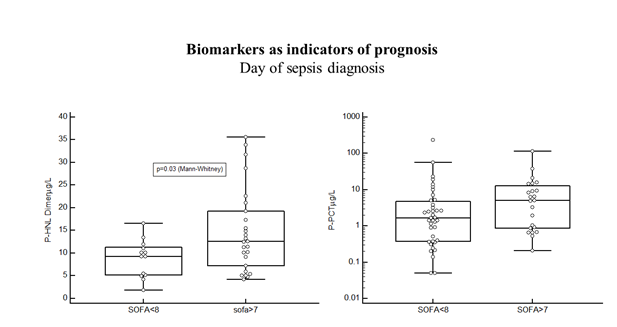 Figure 3: The figure shows the relationship between HNL Dimer and PCT to SOFA score in patients with sepsis. 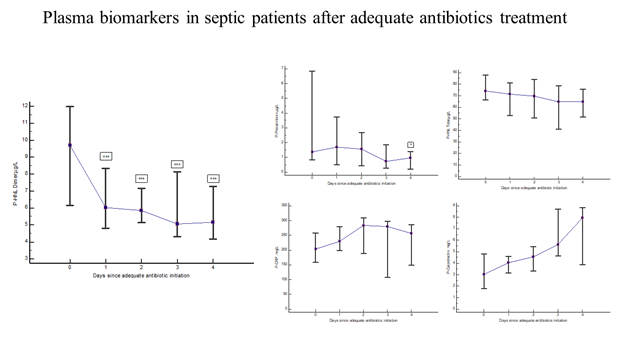 Figure 5: The figure shows the change from before antibiotics to day 2 of adequate antibiotics treatment in HNL Dimer and PCT concentrations in plasma in patients with sepsis.