Identification and characterization of NAGLU mutations in a Sanfilippo B syndrome patient with a novel genotype (p.Y140C/p.R297X)

Background: Sanfilippo B syndrome, or mucopolysaccharidosis type IIIB (MPS IIIB), is a rare lysosomal storage disorder resulting from mutations in NAGLU, which encodes for the enzyme α-Nacetylglucosaminidase (NAGLU). Patients afflicted with this disease experience mild somatic disease symptoms, but severe and ultimately lethal neurodegeneration. Patients often succumb to their symptoms in the first two decades of life. Sanfilippo B syndrome is a molecular heterogeneous disorder, in which nonsense and missense mutations frequently result in a genetic compound genotype, leading to the disease phenotype.

Case Report: We report a novel compound heterozygous genotype (p.Y140C/p.R297X) in a Sanfilippo B patient. The level of NAGLU activity assayed from cultured skin fibroblasts was 0.6% of normal, confirming the biochemical diagnosis of Sanfilippo B syndrome. Immunoblot analysis using an anti- NAGLU antibody showed that the amount of NAGLU protein present was about 50% of normal.

Conclusion: We have identified a novel genotype p.Y140C/p.R297X in a patient with Sanfilippo B syndrome that results in near zero NAGLU enzyme activity. We postulate that the nonsense mutation p.R297X produces either an unstable mRNA transcript or truncated protein that is rapidly degraded, whereas the missense mutation p.Y140C results in a stable but catalytically defective enzyme with near zero residual NAGLU activity. We conclude that the p.Y140C/p.R297X genotype is likely to result in a poor prognosis due to a detrimental biochemical phenotype.

1. Introduction
Mucopolysaccharidosis IIIB (MPS IIIB; Sanfilippo B syndrome; OMIM #2529520) is a rare lysosomal storage disease that results from mutations in the α-N-acetylglucosaminidase (NAGLU) gene mapped to chromosome 17q21, where this disease follows an autosomal recessive manner of inheritance and has
been shown to have a prevalence of 1:250 000 live births [1,2]. NAGLU, a lysosomal hydrolase, is necessary to break down sulfated glycosaminoglycans (GAG), namely heparan sulfate. More than 100 different mutations, including insertion/deletions, nonsense, and missense mutations as well as splice site variants in NAGLU,have been shown to produce the disease phenotype, with symptoms including hyperactivity and behavioral issues, coarse facial features, skeletal defects, and neurodegeneration, where the latter lends to the severity of the disease [3,4].

Patients with Sanfilippo B syndrome usually succumb to the disease within the first two decades of life. Although both the p.R297X (c.889C>T) and p.Y140C (c.419A>G) mutations in patients with Sanfilippo B syndrome have been reported previously, p.Y140C/p.R297X is a novel compound heterozygous genotype [2,5]. The homozygous form of p.R297X, as well as a compound heterozygous form p.Y140C/p.R674C, have been shown to result in severe phenotypic expression of disease symptoms with neurological implications [2,5,6]. p.R297X, one of the more common NAGLU mutations, has been previously reported by Weber et al. with an allelic frequency of 12.5% (10 out of 80 alleles) [6]. In this case report, we describe the identification of the aforementioned novel compound heterozygous genotype p.Y140C/p.R297X in a Sanfilippo B patient with near zero NAGLU activity. We also performed immunoblot analysis to study and correlate the genotype to the biochemical phenotype of NAGLU at the protein level. Lastly, restriction fragment length polymorphism (RFLP) analysis using mismatch polymerase chain reaction (PCR) amplification and HpyCH4III restriction endonuclease digest was established to genotype the p.R297X mutation and efficiently identify this mutation in future patients.

2. Materials and methods
2.1 DNA sequence analysis of NAGLU
Sanfilippo B skin fibroblasts, cell line WG 0421, was obtained from McGill-Montreal Children’s Hospital Cell Repository (Montreal, QC). The cell line was submitted by Dr. Hayato Kihara from the Department of Psychiatry, UCLA. The  clinical history  of the  patient is  unavailable  as Dr.  Kihara  died  in  2007, and subsequently the patient’s record was lost despite efforts to retrieve this information. Fibroblasts were cultured in Dulbecco’s modified eagle medium supplemented with 1% (v/v) non-essential amino acids and 10% (v/v) fetal bovine serum (Life Technologies, Carlsbad, CA) on T-75 flasks. Adherent fibroblasts were disassociated from the T-75 flasks using 0.025% Trypsin-EDTA and genomic DNA was extracted from the fibroblasts using the DNeasy Blood and Tissue Kit (Qiagen, Baltimore, MD). NAGLU exons 1-6 were PCR amplified using primers adapted from Schmidtchen et al. [7] on a Bio-Rad S1000 thermal cycler (see Table 1). The thermal cycling conditions for exons 2 and 5 (595 bp and 434 bp amplicons harboring p.Y140C and p.R297X mutations, respectively) are as listed: initial denaturation at 94°C for 10 mins, 37 cycles of denaturation at 94°C for 0.5 mins, annealing at 55°C for 0.5 mins, and elongation at 72°C for one min, and a final elongation at 72°C for five mins (Table 2). DNA amplicons were purified using the QIAquick PCR purification kit (Qiagen, Baltimore, MD). Sanger sequencing of these amplicons was performed by Eurofins Genomics (Louisville, KY).

2.3 Immunoblot analysis
Human fibroblasts were lysed using Mammalian Protein Extraction Reagent (M-PER®; Thermo Fisher Scientific, Rockford, IL). The total protein concentration of the cellular lysates was determined via a Bradford protein assay [8]. Total protein concentration of each cellular lysate was standardized prior to immunoblot analysis and 8.5 µg of total protein was loaded and separated on a 10% SDS-PAGE gel followed by an anti-NAGLU immunoblot for visualization of NAGLU. The apparent mass of NAGLU was calculated relative to a pre-stained protein standard (Bio-Rad, Mississauga, ON).

3. Results
PCR-amplification of exons 2 and 5 resulted in 595 bp and 434 bp amplicons, respectively, and Sanger sequence confirmed the p.Y140C/p.R297X genotype (Figure 1). DNA sequence analysis of exons 1, 3-4, and 6 showed normal human NAGLU sequence (data not shown). WG 0421 and control DNA amplified using mutagenized primers (see Table 1) were analyzed by HpyCH4III RFLP. Resulting products were run on an 8% PAGE and yielded a 142 bp amplicon corresponding to the normal allele (Figure 2: B) and a 142 bp amplicon, and two fragments of 122 bp and 20 bp, corresponding to the p.Y140C and p.R297X alleles (Figure 2: C; 20 bp fragments omitted). 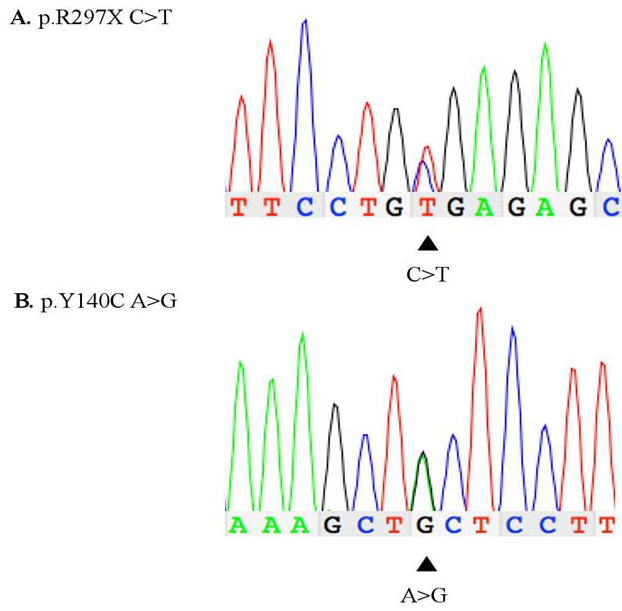 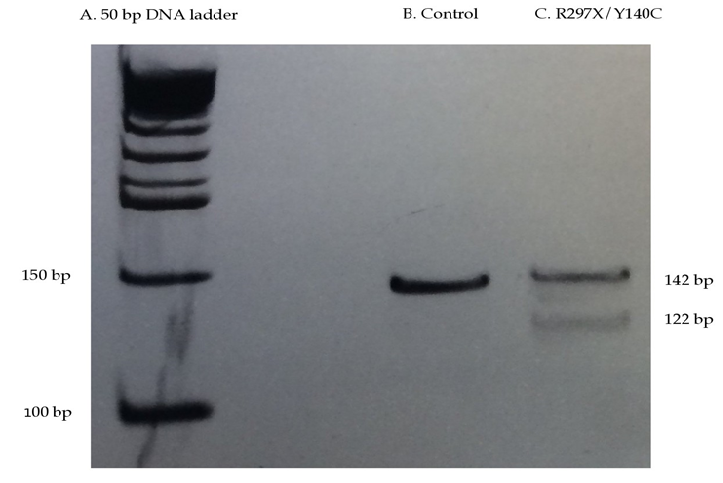 Figure 2: RFLP analysis for the genotyping of NAGLU mutation p.R297X in patient WG 0421 on an 8% polyacrylamide gel electrophoresis at 50-60 V for ~ 3 hours. A: 50 bp ladder (New England BioLabs) B: Control DNA amplicons and C: WG 0421 DNA amplicons. Amplicons (B and C) were generated using a mutagenized forward primer that creates a cleavage site for the enzyme HpyCH4III when the p.R297X mutation is present, and a null site when the normal sequence is present. WG 0421 has a compound heterozygous genotype (p.Y140C/p.R297X), thus creating a cleavage site for HpyCH4III digestion due to the p.R297X-mutated allele (122 bp and 20 bp fragments; 20 bp fragments not shown) and a null site due to the p.Y140C-mutated allele (142 bp band). Amplicons (1 µg DNA) were digested using HpyCH4III restriction enzyme for 1 hour at 37°C, followed by a 65°C inactivation period.

Figure 3: Total cellular protein harvested from confluent WG 0421 (A) and control (B) fibroblasts and separated on a 10% SDS-PAGE gel followed by an anti-NAGLU immunoblot for visualization of NAGLU. A total of 8.5 µg of protein were applied per lane. Both primary and secondary antibodies were applied at a 1:2000 dilution. Lane A: total protein lysate from patient WG 0421 fibroblasts (p.Y140C/p.R297X genotype). Lane B: total protein lysate from control fibroblasts. NAGLU-specific banding is shown in both lanes, corresponding to an apparent 70 kDa product. Relative protein banding intensities (A vs. B) were quantified and compared using ImageJ software. A pre-stained protein standard (Bio-Rad, Mississauga, ON) was included with the SDS- PAGE and used to mark the membrane, where ladder bands denote protein size ranging 10-250 kDas (not shown) and where the apparent NAGLU protein band fell between 50 and 75 kDas.

4. Discussion
We report a novel Sanfilippo B syndrome compound heterozygous mutation, p.Y140C/p.R297X, which results in about 50% of normal NAGLU protein level and 0.6% residual NAGLU activity, compatible with Sanfilippo B syndrome.  This low residual  NAGLU activity suggests that p.R297X and p.Y140C both contribute to a severe form of Sanfilippo B syndrome, and we propose that the allele harboring the p.R297X stop codon mutation results in either an unstable mRNA transcript, or the production of a truncated protein that is rapidly degraded. The allele harboring p.Y140C is proposed to produce a catalytically inactive NAGLU protein, thus resulting in approximately 50% of normal NAGLU protein levels. Comparatively, a study by Yogalingam et al. aimed to characterize the compound heterozygous mutation p.R297X/p.F48L (nonsense/missense mutation) through NAGLU cDNA expression in Chinese hamster ovary (CHO) cells to
determine the role of both mutations in producing the patient’s observed attenuated phenotype [9]. p.R297X was shown to result in undetectable NAGLU activity and a truncated 34 kDa NAGLU polypeptide, which was rapidly degraded [9]. Expression of the F48L mutation produced an 80-kDa precursor with 3.75% residual NAGLU activity, which was eventually degraded as well [9]. In the current study, NAGLU immunoblot analysis indicates the apparent size of NAGLU to be 70 kDa, which falls within range of previously reported NAGLU size (67-83 kDa), where this range is likely due to tissue-specific protein modifications [10-13]. In order to confirm the role of the p.Y140C/p.R297X mutations, expression of both the p.R297X and p.Y140C alleles separately from each other is necessary. Although phenotypic data is not available for patient WG 0421, it is speculated that this patient presented with a severe, not attenuated, form of Sanfilippo B syndrome due to the near zero (0.1 nmol/mg/hr) residual NAGLU activity detected. In a previous study by Piotrowska et al. [14] on the correlation between severity of mucopolysaccharidoses (Hunter and Sanfilippo A and B syndromes) and the residual enzyme activity and efficiency of GAG synthesis, it was postulated that a severe Sanfilippo B phenotype is observed in patients lacking residual NAGLU activity, regardless of GAG synthesis efficiency. Based on the study by Piotrowska et al., the near zero residual enzyme activity measured in the current study is likely to result in a severe phenotype in the patient 14]. In a recent study to discern attenuated and severe Sanfilippo B syndrome phenotypes based on biochemical assays in fibroblasts, Meijer et al.determined an optimal cut-off of 0.58 nmol/mg/hr, thus placing our patient (at 0.1 nmol/mg/h) below the cut- off for an attenuated form of the disease [15].

Disclosure
The author reports no conflicts of interest in this work.

Acknowledgements
This work is funded by a research operation grant from the Sanfilippo Children’s Research Foundation to F.Y.M.  Choy. The authors thank Brandon Chow for his technical assistance, and Dr. Arvan Fluharty at UCLA for his attempts to track down patient clinical history.