Background: Radiation-induced skin reactions often lead to itching and pain. While many cytokines bind and activate nociceptors to initiate pain and the precedent itch upon radiation-induced skin desquamation, little is known that radiotherapy-induced itch can arise from the activation of Notch signaling. With regard to the enhanced ransactivation activity of Notch after irradiation and the Notch-induced intense scratching of mice, we anticipated that a downstream effector of Notch mediates the itch sensation.

Aim: The purpose of this study was to investigate the role of Notch receptor in mediating radiation-induced itch. Methods: Primary human keratinocytes, HEK293T/17, and A549 cells with or without NICD (Notch intracellular domain) overexpression were applied for analytical assays, including qRT-PCR, SDS-PAGE, immunoprecipitation, and luciferase assays, for delineating the relationship between Notch and Cathepsin Sas well as the effect of Cathepsin S on the itch-inducing stimulus, thymic stromal lymphopoietin (TSLP).

Conclusions: This study validates that Cathepsin S is a downstream target gene of Notch and mediates itch by upregulating TSLP. The found mechanism may be targeted for improving patients’ quality of life during radiotherapy.

Radiation-induced skin reactions experienced by patients treated with radiotherapy often incur sequential radiation effects, i.e. itch, pain, delays in treatment could subsequently decrease in patients’ life quality [1]. While many cytokines bind and activate nocireceptors as well as drive the degeneration of the nervous system to initiate pain upon radiation-induced skin desquamation, a sensation of precedently accompanied itch are usually suppressed by scratches and antagonized by pain sensation. Preventive methods of radiation-induced skin reactions, however, have not yet completely diminished itch sensation.

In response to radiation, a multitude of signaling pathways in and between cells are either activated or suppressed for cell survival or the best cell-fate choices. Among all regulated pathways, Notch signaling is often activated to confer cellular radioresistance [2,3]. A series of relevant studies also reveal that impaired Notch ubiquitination and lysosomal degradation can lead to intense scratching and an autoimmune disease in mice [4-7]. In this respect, we investigated the role of the Notch receptor in mediating itch sensation.

Cathepsin S, a cysteine protease, appears to involve in radioresistance and cause itching [8,9]. As a member of the papain family, Cathepsin S is important for intracellular and extracellular degradation and the presentation of antigens on immune cells [10,11]. Kempkes C et al. has shown that Cathepsin S evokes itch through the activation of PAR2 (protease-activated receptor 2) in human skin [12]. In mice, researchers have shown that Cathepsin S activates MrgprC11, a member of Mas-related G-protein-coupled receptors, and evokes receptor-dependent scratching [9]. Nevertheless, it is unknown whether Notch-induced itching can be mediated by Cathepsin S.

There are four Notch receptor paralogs, i.e., Notch 1, 2, 3 and 4, and all the four paralogs have been associated with radioresistance under different pathological circumstances [13-15]. In the normal physiological condition, Notch receptors as transmembrane receptors are activated upon enzymatic cleavage and nuclear translocation of the Notch intracellular domain (NICD) to control a broad spectrum of cell-fate decision [3,16]. The NICD carries nuclear localization signals, which enable it to directly participate in a transcriptional complex and drive Notch-dependent transcription [16]. Here we describe a novel mechanism by which Notch activation induces itching through the upregulation of Cathepsin S and an epithelial-derived cytokine, TSLP (thymic stromal lymphopoietin).

2.3 Luciferase Reporter Assay
Human Cathepsin S promoters with different length (a full 2.8-kb fragment with a CBF binding site, a 2.6-kb or a 1-kb fragments without the CBF binding site) were cloned into the vector pGL-4-14 luciferase (Promega; Madison, WI, USA) using XhoI and HindIII restriction sites. The human genetic DNA was purchased from life technology as a template to clone Cathepsin S promoter region. Human Cathepsin S promoter was generated through PCR using Pfu polymerase (Stratagene; La Jolla, CA, USA) and cloned into the luciferase expression vector pGL4-14. The forward primer sequence, 5’-GCGCTCGAGGGAGGCTGAGG TGGGCAGATTACCTATGGT-3’, was used to generate an XhoI cutting site. The reverse primer sequence, 5’-GCGAAGCTT-GCGGGATCCTTCAAAGCAACAAGGAG-3’ was applied to create a HindIII site. pGL4-14 was cut by both XhoI and HindIII while the ligations were performed as described previously [20]. The 2.6-KB Cathepsin S-luciferase construct was amplified by a forward primer with the sequence of 5’-GCGCTCGAGA AATAAAATAAGATTGGCCATGTACTGATCATTGTTGAAAC-3’, which gave rise to an EcoRI cutting site along with the above mentioned reverse primer. The 1.0-KB Cathepsin S-luciferase construct was amplified with a forward primer in the sequence of 5’-GGGGGTACCCCCCACACCT CCCACAAATCACTAAGAAAATGCAACAATAC-3’, which generated an XhoI cutting site along with the above mentioned reverse primer. Luciferase assays were performed according to the manufacturer’s (Promega; Madison, WI, USA) protocol as previously described [20].

2.5 Transfection
Primary human keratinocyte epithelial and A549 cells (in the density of 106 cells on a 60-mm-diameter plate) were
transfected with 2?g HA-NICD1, HA-NICD2, or HA-NICD4 expression vector, individually with or without using Lipofectamine 2000 reagent (Invitrogen; Carlsbad, CA, USA) according to the manufacturer’s instruction.

2.6 Co-Immunoprecipitation of PAR-2 with Cathepsin S
HEK 293T/17 cells were transfected with plasmids encoding Flag-tagged PAR2 and/or Cathepsin S expression vector(s). After forty-eight hours of transfection, cells were treated with 30?M MG-132 for 5 hours. Co-Immunoprecipitations were performed on cell lysates with an anti-FLAG antibody, and protein interactions were monitored by SDS-PAGE (sodium dodecyl sulfate-polyacrylamide gel electrophoresis) as described in the following section.

2.9 Statistical Analysis
Quantitative data were represented as the mean value of at least three independent experiments. Statistically
significant differences between groups were determined by the Student-t test. Analytical results of p-values less than 0.05 were considered statistically significant and indicated in the figures with asterisks (*).

3.1 Notch 4 Activation Upregulated Cathepsin S
To determine whether NICD1, 3 and 4 can upregulate Cathepsin S expression, primary keratinocytes were transfected with individual HA-tagged Notch intracellular domains and were characterized by RT-PCR and SDS-PAGE assays (Figure 1 A & B). NICD1, 3 and 4 increased both the mRNA and protein levels of Cathespin S to different extents, compared with those of the control (Figures 1A and 1B). Correspondingly, an 8.6-fold upregulation of Cathepsin S was found in mammary tumors expressing MMTV (mouse mammary tumor virus)-NICD4 (Table 1) compared with that found in large T -/- & BRCA1-/- mammary tumors. These results indicate that Cathepsin S can be upregulated by Notch activation, particularly Notch4 activation. 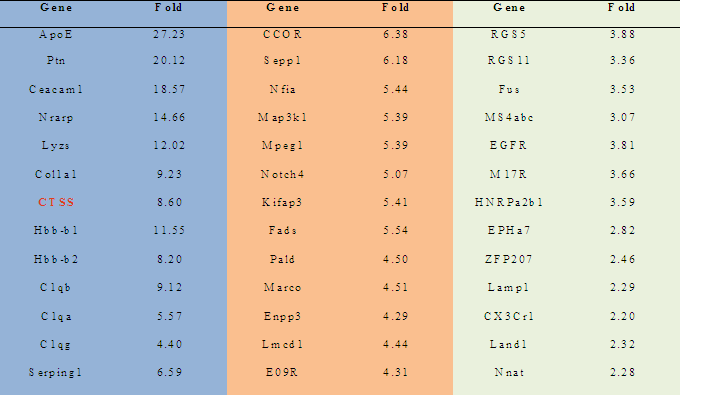 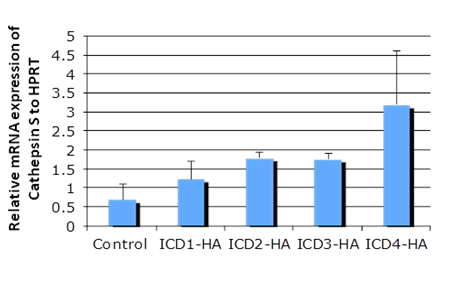 3.3 Cathepsin S Upregulated TSLP
To interrogate whether Cathespin S interacts with protease-activated receptors, HEK293T cells were transfected with pCMV-EGF-PPAR2-FLAG-His plasmids in the presence or absence of Cathepsin S overexpression for a co-immunoprecipitation assay. By pulling down Flag-tagged PAR2 with the anti-FLAG antibody, Cathepsin S was co-precipitated and immunoblotted along with PAR2 (Figure 3). Since Cox2 is a target gene for PAR2- activation [22], we checked if Cathepsin S upregulates Cox2 expression. As shown in Figure 4, trypsin, an agonist for PAR-2 signaling, increased Cox2 expression to a greater extent than that of TSLP expression. In contrast, Cathepsin S and the PAR2 agonist, SLIGRL (a peptide expressed in mice) could not upregulate Cox2 but TSLP, indicating that Cathepsin S-mediated itching may be triggered through the activation of TSLP receptor on peripheral afferent neurons [23].

Figure 4:Cathepsin S upregulated TSLP but not Cox-2. Lysates extracted from primary human keratinocytesthat were treated with PAR-2 agonist (the 2nd lane), trypsin (the 3rd lane) or Cathepsin S (the 4th lane) were blotted for Cox-2 and TSLP protein expression.  In comparison with the effect of SLIGRL (a PAR-2 agonist), Cathepsin S markedly triggered TSLP upregulation on normal human epidermal keratinocytes. The effect of Cathepsin S was also differed from that of trypsin by expressing Cox-2 at the basal level. Abbreviation Cath S: Cathepsin S; PAR2:  protease-activated receptor 2.

Radiation-induced cell signaling can be elicited through the activation of protein receptors. Notch signaling, for
example, confers breast cancer resistance upon cell irradiation [22]. Concurrently, radiation stimulates G protein-coupled receptors (GPCRs) and results in inflammation via the activation of transcription factors [23]. In this study, we elucidated a crosstalk mediator of Notch signaling in evoking itch sensation via the stimulation of PAR-2 receptor. As a G protein-coupled receptor, PAR-2 can be cleaved and subsequently activated by proteinases, such as trypsin and Cathepsin S [24,25]. Nevertheless, Cathepsin S cleaves the N-terminus of PAR2, which hence exposes a tethered ligand, KVDGTS, different than that resulting from trypsin cleavage [25]. This may explain the observation that Cathepsin S led to an expression ratio of TSLP to COX2 larger than that caused by the trypsin or the hexapeptide, SLIGRL.

It has been reported TSLP, as a pruritogen and an itch-inducing stimulus, activates dendritic cells to react to infection and tissue stress [26-28]. Radiation-induced expression of TSLP can be resulting from Cathepsin S- or PAR-2- independent pathways, such as JNK, ERK or Mas-related G-protein-coupled receptor signaling [9,29]. Therefore, the findings of this study are limited to the mechanism of TSLP upregulation through Notch-Cathepsin S-PAR2 pathway with regard to a wide panel of radiation-induced itching mediators. As many cytokines and inflammation factors can also mediate radiation-induced itch sensation, the impacts of TSLP upregulation and Notch inhibition on itching using animal models are required to be further evaluated with radiation.

In conclusion, this study demonstrated a new target gene of Notch. Cathepsin S expression was found along with the expression of many other genes, elevated in the Notch4 ICD transgenic mammary tumor. Mechanistically, we identified the role of Notch from the interaction between NICD4 and the CBF binding site of Cathepsin S promoter as well as Cathepsin S-mediated TSLP upregulation in the Notch-Cathepsin S-PAR2-TSLP signaling pathway. This work potentially identified molecular mechanisms by which Notch may induce itching in irradiated skin and may shed a light onto new methods for ameliorating itch sensation.

The authors thank Dr. Ethan A Lerner and Dr. Vemuri B Reddy from the Massachusetts General Hospital, Harvard Medical School as well as Dr. William Lowther and Dr. Robert Callahan from the National Cancer Institute of USA for technical support.