Kartagener syndrome is a monogenic inherited disorder in the heterogenous group of primary diseases of the cilia, with pulmonary and ENT (ear/nose/throat) involvement, situs inversus, and infertility. The condition is characterized by the clinical triad consisting of bronchiectasis, situs inversus, and chronic sinusitis. Most cases result from biallelic mutations in DNAH5 and DNAI1 genes, which encode the outer dynein arm, responsible for microtubule movement in cells. We are reporting a 14-yearold male patient who underwent genetic testing at 14, despite recurring sinus and ear infections from a very young age. A recently performed CT scan revealed dextrocardia, and further imagistic investigations showing situs inversus and genetic testing defined a compound heterozygous genotype for the DNA11 gene as Kartagener syndrome was confirmed. Heterozygous pathogenic variants were identified in both parents and the patient’s brother. The case report provides details regarding the patient's diagnosis, the medical particularities of the case due to genotype-phenotype associations, and the psycho-emotional impact related to the diagnosis of a rare genetic disease. Potentially relevant family history is also discussed. This is the first patient with Kartagener syndrome to be reported and published in Romania.

Kartagener syndrome (MIM#244400) is a rare genetic disorder with autosomal recessive inheritance, characterized by primary ciliary dyskinesia. The clinical triad which defines the condition consists of situs inversus, chronic sinusitis, and bronchiectasis [1]. Due to the impaired motility of the cilia, patients are predisposed to developing recurrent ENT (ear/nose/throat) infection, chest infection, and infertility caused by immotile spermatozoa in males and ciliary dyskinesia in the fallopian tubes in female patients [2]. Kartagener syndrome is most commonly the consequence of defects in DNAH5 and DNAI1 genes, which encode the heavy, intermediate chain of dynein, a protein responsible for microtubule movement in cells. Although the mechanism is based mainly on axonemal impairment, the phenotypic presentation of the syndrome is highly heterogeneous.

We are reporting a 14-year-old male patient who presented in the Pneumology Department with recurring sinus and ear infections associated with coughing and excessive nasopharyngeal secretions. We mention that the patient comes from pregnancy with no complications; he was born at full term and did not present fetal distress or postnatal pathological clinical manifestations. In the first year of their life, he showed recurrent ear and nose infections, treated with non-steroidal anti-inflammatory drugs and antibiotics. Multiple allergies were investigated, and immunology, pneumology, and ENT investigations were performed, but no accurate diagnosis was established. During childhood, symptomatic treatment was alternatively administered depending on the severity of the recurrences, more severe respiratory episodes often necessitating withdrawal from school activities. During the past year, the patient's symptoms have worsened as he experienced decreasing tolerance to effort and persistent coughing throughout the day, affecting essential daily and social activities and altering his quality of life. Due to the epidemiological context and being diagnosed with Covid infection, the patient underwent a CT scan, and two bronchiectasis lesions were discovered along with dextrocardia. Interestingly, the mother mentioned that the maternal grandfather also had dextrocardia, but he was asymptomatic until he was 80. No other family members presented with dextrocardia or ENT-related symptoms, except for the mother, who had a mild form of chronic rhinosinusitis. The pneumologist suspected Kartagener syndrome, and the patient was addressed for genetic counseling. Given the suggestive clinical and imaging findings, after informed consent was obtained from both the patient and the parents, a comprehensive molecular panel was performed using an NGS combined with MLPA techniques which detect structural anomalies and deletions/duplications in 174 candidate genes for primary ciliopathies. The result revealed two pathogenic mutations in the DNAI1 gene, c.1612G>A (p.Ala538Thr) and c.180G>A (silent) variant. Genetic testing was recommended for both parents and the patient’s five-year-old brother, who were diagnosed as carriers of a mutant gene variant. The mother is a carrier for the c.1612G>A (p.Ala538Thr) variant and the father for the silent but disruptive, c.180G>A variant of the DNA11 gene, so we concluded that the patient inherited the mutations on different alleles of the gene and therefore he is a DNA11 compound heterozygous, which genetically defines Kartagener syndrome. The patient’s brother carries the same pathogenic variant as the father, who is an asymptomatic carrier of the disease. Furthermore, a complete MR imaging was performed to evaluate other topographic anomalies in Kartagener syndrome, and situs inversus was described. 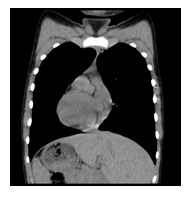 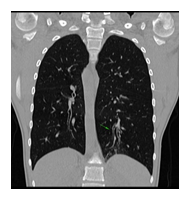 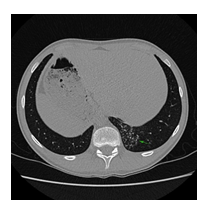 The patient and his family received genetic counseling and the necessary information to understand the disease and its implications. The patient was referred to a multidisciplinary approach with experience in the clinical management of primary ciliary dyskinesia. A primary care pneumologist, a respiratory rehabilitation nurse, and a general practitioner will monitor the evolution of the patient, together with a fertility specialist, if infertility will represent an issue for the patient in the future.

Before the NGS technology development, the diagnosis of Kartagener syndrome was solely clinical and based on the typical triad represented by recurring sinusitis, bronchiectasis, and situs inversus [3]. As for most rare genetic disorders, primary ciliary dyskinesia is associated with various lung pathologies like cystic fibrosis or asthma [4] or is used as an exclusion criterion [5], especially in countries where molecular testing is still a luxury tool [6]. Most affected individuals present symptoms from early childhood, a period when ENT infectious recurrences are common due to social interaction. Recurring sinus and ear infections can lead to complications such as hearing impairment, deviated septum, nasal polyps, or severe allergies [7]. All these manifestations have been previously reported as common signs in ciliary disorders [1,3]. Among our patient's most disturbing symptoms are chronic refractory rhinosinusitis, bronchitis episodes, productive coughing, and thick, mucoid rhinorrhea, which became more severe in the past year and severely affected his quality of life. Although there were early signs of the disease, genetic testing was recommended only after dextrocardia was documented in a CT scan to investigate potential pulmonary involvement due to Covid-19 infection. Interestingly, the patient’s family history involves dextrocardia in the maternal grandfather, which did not cause any clinical manifestations. The grandfather did not undergo genetic testing for mutations that might be associated with primary ciliary dyskinesia. Recurring sinusitis was also present in the patient’s mother, who carries a pathogenic variant of the DNAI1 gene. While studies do not demonstrate a clear association between Kartagener syndrome and positive family history of recurring sinus infections or dextrocardia, it could represent an aspect worth evaluating. Although ciliopathies are monogenic, Mendelian disorders [8], the phenotype can be influenced by many non-Mendelian factors like locus heterogeneity, copy number variants oligogenic, multiple allelism, transposon-mediated mutagenesis, epigenetics, and of course, environmental factors [9].  An essential aspect of rare genetic diseases is the genotype-phenotype association, which can provide valuable information regarding the clinical features, evolution, and possible complications of various pathologies. An even more critical element in primary ciliary dyskinesia is its being characterized by significant clinical heterogeneity. Our patient presents two different pathogenic variants in both alleles of the DNAI1 gene. Together with the DNAH5 gene, DNAI1 represents the most affected gene in Kartagener syndrome [3]. A recent review on PCD revealed that patients with DNAH11 mutations had significantly better respiratory function with higher FEV1 values at diagnosis than patients with mutations in any of the other genes [10]. In our patient, upper airway manifestations prevail the clinical phenotype, such as recurrent rhinosinusitis and otitis, both present from early childhood. Currently, the respiratory function seems to be preserved; the functional respiratory examination is within the normal range for his age. To our knowledge, there are no published cases of Kartagener syndrome with c.1612G>A (p.Ala538Thr) / c.180G>A DNAI1 compound heterozygosity. The c.1612G>A variant is classified as pathogenic and reported as homozygous in Kartagener. The c.180G>A variant was considered until recently a variant of uncertain significance due to its silent change of amino acid structure. Still, algorithms developed to predict the effect of nucleotide changes on RNA splicing suggested that this variant may alter RNA splicing [11]. The compound heterozygous genotype may explain the phenotype dominated by ENT manifestations with a variant with moderate penetrance. Kartagener syndrome is invariably associated with infertility due to a lack of mobility in spermatozoa or obstructive azoospermia [12]. Studies show that patients with this diagnosis can achieve viable pregnancies with assisted conception consisting of intracytoplasmic sperm injection. Sperm motility can be enhanced with the help of pentoxifylline, or the process can involve random selection of sperm and fertilization using assisted oocyte activation [13,14]. Being able to assure biological fatherhood is an important issue. Although confirming the diagnosis helps improve patient management, pediatric genetic testing raises ethical concerns. Genetic counseling and family planning are essential in avoiding further pregnancies with the same condition as the affected family member [15]. Predictive testing can identify the genetic findings that imply a predisposition towards developing certain diseases and allow necessary prophylactic measures. Nevertheless, we cannot oversee the emotional impact a diagnosis of a rare illness means for both the pediatric patient and his family [16]. It is always possible that genetic testing reveals some secondary findings than the initial suspicion, so it is essential that the parents and the child, especially in the teenage years, understand all the possible results and outcomes of performing diagnostic genetic testing [17]. As for most rare genetic diseases, early diagnosis of primary ciliopathies like Kartagener syndrome is essential for preserving pulmonary function, assuring a better quality of life, and providing the necessary emotional support.

Kartagener syndrome is primary ciliary dyskinesia with autosomal recessive inheritance. The clinical trial is characterized by bronchiectasis, chronic sinusitis, and situs inversus. Infertility also represents an issue for Kartagener syndrome patients, but assisted conception can help achieve viable pregnancies. The patient we are reporting is a 14-year-old male who presented recurring ENT and pulmonary infections from the first year of his life. Nevertheless, pulmonary function is still preserved. When undergoing a CT scan searching for potential lung damage caused by Covid-19 infection, dextrocardia was observed, along with bronchiectasis lesions in the lower left lobe. Further imagistic investigations show situs inversus. Genetic testing, performed using a combination of the NGS and MLPA techniques, revealed two pathogenic mutations in the DNAI1 gene: c.1612G>A (p.Ala538Thr) and c.180G>A (silent) variants. Both the patient’s parents and brother are heterozygous carriers of a pathogenic variant. The patient’s family history shows that the mother suffers from chronic sinusitis. The maternal grandfather is known to have dextrocardia, but he did not undergo genetic testing. As potential complications can occur due to recurrent clinical manifestation, a multidisciplinary approach is required to ensure our patient’s a better quality of life. Rare genetic disorders and their implications have a significant emotional impact on pediatric patients and their families, so psychological counseling must be included in case management.

Ethics approval and Consent to Participate

The patient gave consent to publish the case details and associated images.

The datasets used during the present study are available from the corresponding author upon reasonable request.

AC performed genetic consults and counseling; EC has seen and confirmed the raw data’s authenticity; MSM interpreted the genetic test results. AFC and CP had clinical and imaging evaluations. All the authors have read and approved the final manuscript.