Background Introduction: Endocarditis is an uncommon condition in developed countries. Incidence rates range from 4 to 7 cases per 100,000 individuals a year. The incidence of simultaneous double valve endocarditis is extremely low.

Objectives and Aims: This is a case study detailing a 67-year-old Caucasian male who was admitted for suspicion for endocarditis of which Duke Criteria were fulfilled for multi-valve endocarditis. We wish to demonstrate the usefulness of utilizing Duke’s Criteria for management of endocarditis in patients with multivalve involvement. Materials and Methods: Medical records were obtained from Trios Health and Sacred Heart Medical Center after permission was obtained. All documentation and acquired articles were obtained and reviewed.

Results: The patient presented to the emergency department complaining of shortness of breath and cough. Evaluation in the emergency department resulted in a suspicion for endocarditis. He was subsequently admitted to the medical floors for management. A transesophageal echocardiogram was conducted, which demonstrated a peri-prosthetic valvular abscess on the aortic valve along with vegetations on the mitral valve. Due to positive Duke criteria for multivalve involvement, he was transferred to a tertiary referral center where he underwent surgery for valve replacement. Surgery noted an abscess with the destruction of the aortomitral continuity but no evidence of infection of the mitral valve.

Conclusion: We recommend treatment for multivalve endocardidits when Duke Criteria is satisfied. Our patient may have had a resolution of the abscess prior to surgical intervention, which can be attributed to his vigorous treatment schedule.

Our patient is a 67-year-old Caucasian male with underlying hypertension, hypercholesterolemia, bilateral carotid bruit with non-obstructive disease, diabetes mellitus type II, obesity, and a Medtronic bioprosthetic porcine aortic valve replaced nine years prior to presentation. In addition, the patient had a pacemaker implanted two months prior to unexplained complete heart block further complicated with Streptococcal bacteremia that was treated initially with Vancomycin/Keflex and switched to Augmentin. The patient presented to the emergency department (ER) complaining of acute shortness of breath and non-productive cough for three days. 15-20 days prior to presentation, the patient noted that he seemed to have a ”flu-like illness” with a productive cough and shortness of breath. He was treated at an urgent care facility during that episode and was diagnosed with an upper respiratory tract infection. He was given azithromycin, tessalon pearls, Nasonex, and Zyrtec. The patient stated that his course improved until three days prior to admission when his shortness of breath increased requiring evaluation. The patient also reported having a prosthetic heart valve, placed 10 years prior and a pacemaker placed eight weeks prior to presentation. In addition, the patient states he had lost 15 pounds the week prior to presentation. He denied a history of illicit drug use, smoking, as well as alcohol cessation two years prior. Lab work drawn at the emergency room was significant for a proBNP = 4148, hematocrit = 38.8, hemoglobin = 12.6, glucose =200, BUN = 28 and eGFR = 59. Blood cultures were collected as well. A chest x-ray was significant for small bilateral pleural effusions with atelectasis or possible infiltrate. A cardiology consult from the ED resulted in a suspicion for diastolic heart failure, bioprosthetic valve stenosis, and endocarditis. Blood cultures where ordered and orders for a TEE was also ordered. He was subsequently admitted to the medical floors for further management.

After admission, A transesophageal echocardiogram was conducted which demonstrated a peri-prosthetic valvular abscess on the aortic valve along with vegetations on the mitral valve that measured to be 3.2cm by 0.3cm on the mitral annulus. Both masses were initially thought to be infective in nature. The cardiologist on duty requested a surgical consult in a tertiary care center for prosthetic valve replacement. Blood cultures demonstrated growth for pan-sensitive Streptococcus sanguine and Streptococcus salirius. Infectious disease recommended a treatment regimen of ceftriaxone 2 grams daily, vancomycin 2 grams q12, kept in trough 15 to 20, as well as gentamicin 5mg/kg at 450mg QD, and rifampin 900 mg QD were started. Repeat blood cultures three days into admission demonstrated no growth. In addition, the patient’s pacemaker was interrogated for issues. There was evidence for intrinsic AV conduction, which led the cardiologist to turn off the VIP and AV delay search was started. As a result, the patient then had normal conduction natively with sinus rhythm and PAC’s as well as T wave inversions. On the fourth day of hospitalization, the patient had displayed episodes of hypotension and tachycardia during his initial hospital course. Though the patient had improved and stated he felt much better, a mild drop in hemoglobin and an increase in bilirubin was seen that was thought to be due to hemolysis. It was deemed that there was a reasonable chance of the patient decompensating and requiring immediate valvular surgery, which required transfer to a tertiary care setting for surgical valve repair. 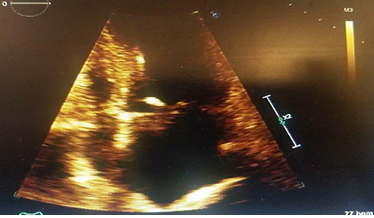 Figure 1: Image of patient’s mitral valve with abscess noted from an initial echoardiogram 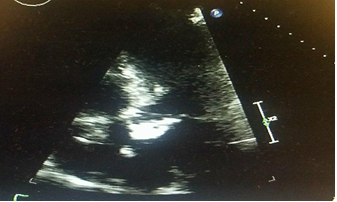 The patient was assessed at the tertiary center for surgery and stayed for a total of five days. The patient was cleared for surgery and kept inpatient for observation for four days while waiting for surgery. On his ninth day, the patient underwent surgery for an aortic valve replacement along with an aortic root replacement using a homograft with coronary artery bypass grafting x1 with a vein to the left anterior descending artery. In addition, the patient had his infected pacemaker removed. Intraoperatively, the surgeon noted an abscess and space with the destruction of the aortomitral continuity, along with a collection of fluid underneath the septum, which the surgeon attributed to causing the conduction delay. In addition, the surgeon noted that the coronary artery to be calcified, no evidence of stenosis was present. The patient’s mitral valve was inspected but no evidence of infection was noted. He was eventually discharged with six weeks of ceftriaxone (2 g IV q24h).

Multiple valve endocarditis is an uncommon pathology in that this disease process has limited treatment guidelines and poor survivability. Endocarditis usually involves a single valve, but triple or quadruple valve involvement is extremely rare. Mortality rates increase in patients with two or more valves as well as do symptoms [3]. In addition, the majority of patients with the multi-valve disease was thought to be seeded by IV drug abuse with S. aureus being found to cause 48% of multivalvular endocarditis in one group of patients with multivalvular disease [3]. Viridians group Streptococcus was seen in this same group to be the cause of 36% of multi-valve endocarditis, the second most common etiological agent. In addition, the same group found congestive heart failure to be a common complication as seen in 64% of patients. Congestive heart failure was more common in multivalvular patients than in uni-valvular patients.

In our patient, it was postulated that the patient's lack more severe symptoms were likely due to previous treatment 2 months earlier with Keflex and Augmentin for oral infection. In addition, due to his transfer to a tertiary care center, further outcomes where unavailable at the time of writing this case report. Our patient also reported he had never used IV drugs, which resulted in suspicion that his pacemaker and respiratory tract infections were potential origins of the infection. Our case is unique in this sense in that it brings awareness to providers of the potential for multivalvular infection in seemingly less symptomatic patients. We recommend treatment for the multivalve disease when Duke Criteria comes back positive, even with the seemingly negative disease on gross pathology. Though Duke Criteria has a sensitivity of 76% [4], we feel our patient may have had a resolution of the abscess prior to surgical intervention, and his treatment schedule may have helped in the treatment of his aortic valve disease.