Autism spectrum condition (ASC) or autism spectrum disorder (ASD) is primarily identified with the help of behavioral indications encompassing social, sensory and motor characteristics. Although categorized, recurring motor actions are measured during diagnosis, quantifiable measures that ascertain kinematic physiognomies in the movement configurations of autistic persons are not adequately studied, hindering the advances in understanding the etiology of motor mutilation. Subject aspects such as behavioral characters that influences ASD need further exploration. Presently, limited autism datasets concomitant with screening ASD are available, and a majority of them are genetic. Hence, in this study, we used a dataset related to autism screening enveloping ten behavioral and ten personal attributes that have been effective in diagnosing ASD cases from controls in behavior science. ASD diagnosis is time exhaustive and uneconomical. The burgeoning ASD cases worldwide mandate a need for the fast and economical screening tool. Our study aimed to implement an artificial neural network with the Levenberg-Marquardt algorithm to detect ASD and examine its predictive accuracy. Consecutively, develop a clinical decision support system for early ASD identification.

Guha et al. [7] used gesticulation data to measure atypicality variance in facial expressions of children with and without ASD. Six facial reactions were securitized using information theory, statistical analysis and time- series modeling. Recently researchers have engrossed in refining and implementing data analytics as a diagnosis tool for ASD. Being an efficient computational tool machine learning has disclosed its potential for classification in the various domain [8-9]. Therefore, some literature has employed machine learning methods to identify neural [10] [11] or behavioral markers [12-13] responsible for discriminating individuals with and without ASD. Stahl et al. [10]  studied the influence of eye gaze to classify infant groups with a high or low risk of getting ASD. Computational methods such as discriminant functions analysis with an accuracy of 0.61, support vector machine with an accuracy of 0.64, and linear discrimination analysis with an accuracy of 0.56 were implemented. Bone in 2016  [14] retrieved data from The Autism Diagnostic Interview-Revised and The Social Responsiveness Scale and applied SVM machine learning classifier to a significant group individual with and without ASD and obtained promising results and demonstrated that machine learning could be used as a useful tool for ASD diagnosis. Grossi et al. employed artificial neural networks (ANNs) to develop a predictive model using a dataset comprising of 27 potential pregnancy risk elements in autism development [15]. The artificial neural network produced a predictive accuracy of 80%. Their study supported and encouraged the use of ANNs as an excellent diagnostic screening tool for ASD. The highest classification accuracy obtained so far is 96.7% using SVM.

With the aim of developing a clinical decision support system, we implement artificial neural networks with the Levenberg-Marquardt algorithm on data set that contains ten behavioral and ten personal attributes of adults with and without ASD.

2. Methodology
This study does not involve any participation of human subjects. We extracted the data from the UCI library. The data and data description is provided with this paper. It consists of 20 predictors (ten behavioral and ten personal attributes), one response variable ad 704 instances.

The methodology designed for this study can be divided into (a) data preprocessing, (b) designing the model, and (c) fitting and evaluating the model.

2.1 Data preprocessing
Data preprocessing is one of the most critical steps in all machine learning application. In this study, we did not use missing data points and partitioned the dataset into training, testing and selection instances. The following pie chart (figure 1a) details the uses of all the instances in the dataset. The total number of instances is 704, that contains 424 (60.2%) training instances, 140 (19.9%) of selection instances, and 140 (19.9%) of testing instances. The following pie chart includes all the missing values. 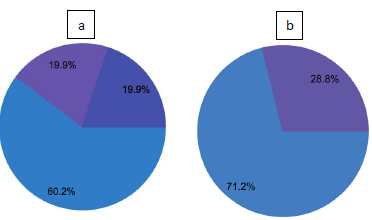 Figure 1: (a) Shows the partitioned data; (b) Shows the number of instances belonging to each class in the dataset.

2.2 Designing the model
In this step we calculated the suitable training algorithm for our dataset and determined the complexity of the model, that is the optimal number of neurons in the network.

2.2.1 The levenberg?marquardt algorithm: Kenneth Levenberg and Donald Marquardt developed The Levenberg?Marquardt algorithm (LM) [16-17] that generates a mathematical solution to a problem of minimizing a non- linear function. We used this algorithm because in the domain of artificial neural-networks it is fast and has stable convergence. The LM algorithm approaches the second-order training speed without calculating the Hessian matrix. It holds good when the loss function has the arrangement of a sum of squares. LM is an optimization algorithm that outperforms simple gradient descent and conjugate gradient methods in a diverse assortment of problems. LM algorithm follows equation 1 as shown below.

where J is the Jacobian matrix, T stands for transpose, k is the index of iteration, e is the training error and w is the weight vector.

The following table 1 shows a brief description of the parameters used for this algorithm. 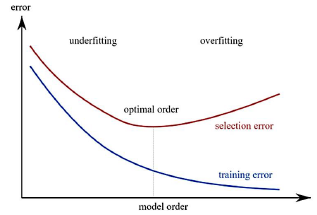 Figure 2: Effect of model complexity on Overfitting and Underfitting.

3. Results
Implementing the Levenberg?Marquardt algorithm and incremental order selection enabled the proposed model to produce a classification accuracy of 98.38%. The following table 2 shows the training results obtained by the Levenberg-Marquardt algorithm. They include final states from the neural network, the loss function, and the training algorithm. The number of iterations needed to converge is found to be zero, which infers that the training algorithm did not modify the state of the neural network.

Table 2: The result obtained from the Levenberg-Marquardt algorithm.

The optimal number of neurons was calculated to be 1. The figure 3 displays the loss history for the different subsets during the incremental order selection process. The blue line represents the training loss, and the red line symbolizes the selection loss. 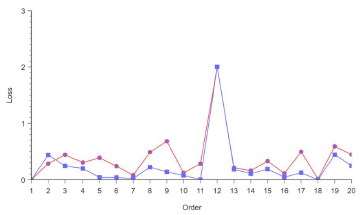 3.1 Testing errors
This task measures all the losses of the model. It considers every used instance and evaluates the model for each use. The table 4 below shows all the training, testing and selection errors of the data.

3.2 Confusion table
This section shows the correct and miss classifications made by the model on the testing dataset. The table 5 below is termed as a confusion matrix. The rows in the table denotes the target variables, whereas the columns represent the output classes belonging to the testing dataset. The diagonal cells depict the correctly classified, and the off-diagonal cells indicates the misclassified instances.

Classification accuracy was then calculated from the confusion matrix using the following equation 2:

The following part of this section will evaluate the model’s performance based on ROC, Cumulative gain, Lift plot and Loss index.

3.3 Receiver Operating Characteristic
A good way to analyze the loss is by plotting a ROC (Receiver Operating Characteristic) curve which is a graphical illustration of how good the classifier distinguishes between the two dissimilar classes. This capacity for discrimination is measured by calculating the area under the curve. ROC was found to be 1 with an optimal threshold of 0.882. The figure 4 below shows the ROC curve obtained and the blue shaded region is the AUC. 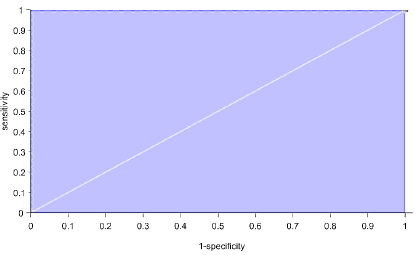 3.4 Cumulative Gain
The cumulative gain analysis is a pictorial representation that illustrates the benefit of implementing a predictive model as opposed to randomness. The baseline represents the results that would be obtained without using a model. The positive cumulative gain which shows on the y-axis the percentage of positive instances found against the percentage of the population, which is represented on the x-axis. 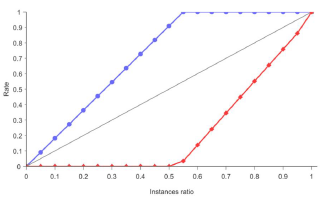 The maximum gain score of a cumulative gain is obtained by the computing the maximum difference between the positive and the negative cumulative gain, i.e., it is the point where the percentage of positive instances found is maximized, and the percentage of negative instances found is minimized. If we have a perfect model, this score takes the value 1. The next table 6 shows the score in this case and the instances ratio for which it is reached.

3.5 Lift plot
A lift plot provides a visual aid for evaluating a predictive model loss. It consists of a lift curve and a baseline. Lift curve represents the ratio between the positive events using a model and without using it. Baseline represents randomness, i.e., not using a model. The figure 6 below shows the lift plot obtained for this study. The x-axis displays the percentage of instances studied while the y-axis displays the ratio between the results predicted by the model and the results without the model. 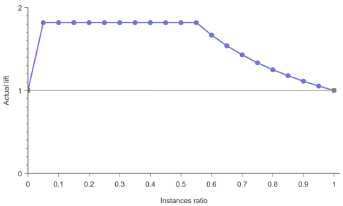 3.6 Loss index
The loss index plays an essential role in the use of a neural network. It delineates the errand that the neural network is designed to perform and provides a gauge of the quality of the desired learning. The loss index varies with different applications. We implemented the weighted squared error as the error method which is especially useful when the data set has unbalanced targets. That is, there are too few positives when compared to the negatives, or vice versa. The following table 7 shows the exponent in error between the outputs from the neural network and the targets in the dataset.

Table 7: Exponent in error between the output from the ANN and the target variable.

4. Conclusion
To our knowledge, this is the first attempt to examine identification of autism using the Levenberg-Marquardt algorithm and incremental order selection in the field of artificial neural networks. Moreover, our model produced the highest classification accuracy of 98.38%. Through this study, we highlighted the importance of the training algorithm, order selection algorithm and selecting the required loss index to deal with unbalanced data. Based on the observations and evaluation of the proposed model, it can be inferred that Neural network with the Levenberg-Marquardt algorithm and incremental order selection is an appropriate tool for diagnosing ASD and can be deployed as a clinical decision support system.