Oxidative stress results from an imbalance between reactive oxygen species production (ROS) and the abilities of biological systems to eliminate them. In that context, reduced glutathione (GSH) is the central redox agent in most aerobic organisms and a fundamental player in the fine regulation of oxidative stress. GSH is involved in numerous vital functions such as detoxifying electrophiles, scavenging free radicals, maintaining the thiol status of proteins, providing cysteine, modulating DNA synthesis, microtubular-related processes, nitric oxide homeostasis, and the activity of neuromodulators as well as immune functions (reviewed in [1]). As a result, GSH plays important roles in cell metabolism, differentiation, proliferation [2] and apoptosis. Disturbances in GSH homeostasis are implicated in numerous human diseases, including cancer, pathologies associated to aging, cardiovascular, inflammatory, immune degenerative diseases [3]. Although GSH is present in the extracellular fluid, it cannot be directly uptaken by cells [1, 3]. It is degraded by cells expressing the ectoprotein γ-glutamyl transpeptidase to produce dipeptides and free amino-acids uptaken by cells and used for de novo GSH synthesis. GSH is a tripeptide (γ-L-glutamyl-L-cysteinylglycine) synthesized by two cytosolic ATP dependent enzymes: glutamate cysteine ligase (GCL) leading to the production of γ-glutamyl-cysteine from glutamate and cysteine and glutathione synthetase (GS) involved in the ligation of γ-glutamyl-cysteine to glycine to produce γ-glutamylcysteinylglycine. Cellular redox regulation are crucial in cell-matrix interaction [4]. Adhesion between cells and extracellular matrix is under the control of integrins. They have been identified as a target of redox-regulation by ROS [5]. Indeed all integrins contain a large number of cysteine residues in their ectodomains. The protein disulfide isomerase (PDI) regulates integrin-mediated activities, including adhesion. Blocking PDI inhibits adhesion [4, 6, 7]. Redox agents such as glutathione were shown to regulate the function of integrins [8, 9]. Integrins connect the extracellular matrix to the actin cytoskeleton. It has been suggested that integrins serve as cell volume sensors [10, 11]. Despite the described effects of redox on integrins, the effets of reduced glutathione on cell volume has never been reported so far. The present study relates experimental results pointing out the effect of reduced glutathione on cell volume, using different methods. Implications of such a new effect of reduced glutathione will be discussed in the light of recent data from the litterature.

Reduced glutathione, buthionine sulfoximine (BSO) and TRITC-phalloïdin were purchased from Sigma-Aldrich. BSO is an effective and specific inhibitor of γ-glutamylcysteine synthetase, the enzyme of the first step in glutathione synthesis [12]. Zombie Red was purchased from Ozyme (Saint-Cyr L'Ecole, France). Intracellular concentration of glutathione was measured using the GSH-Glo™ Glutathione Assay from Promega. Pro-GA (Funakoshi Co., Ltd) is a new, pro-drug type inhibitor of γ-glutamylcyclotransferase (GGCT, EC 2.3.2.4), is part of the gamma-glutamyl cycle, which catalyzes the degradation of (5-L-glutamyl)-L-amino acid into 5-oxoproline + L-amino acid. 5-oxoproline is a precursor of glutamate, essential for intracellular production of glutathione.

2.3.1 Real-Time Cell Analysis of Impedance: Real-time cell analysis xCELLigence biosensor (RTCA, Agilent, Santa Clara, USA) measures cell surface occupancy (i.e. by impedance measurement), expressed as cell index. It takes into account cell number, cell size and adhesion force. Cells were grown until cell index reached around one (i.e. linear proliferative phase), which may take between 48 to 72 hours. Then culture medium was replaced by a fresh one containing either reduced glutathione and/or different inhibitors. The impedance was recorded every 15 min in a standard 37°C cell culture incubator with 5% CO2.

2.3.3 Cytometry: For cell toxicity assay, at the end of experiments, living cells were incubated during 15 min at 37°C in the presence of Zombie Red (1/1000) according to the manufacturer's procedure (Ozyme) then trypsinized and fixed in PBS with formalin 3% (Sigma Aldrich). For F-actin quantification, at the end of experiment, cells were trypsinized then fixed with PBS/formalin 3% and incubated with PBS/Triton 0.1%/TRITC-phalloïdin 1 μg/mL (Sigma Aldrich) during 5 min. Cell count and fluorescence analyses were performed onto a Novocyte cytometer (Novocyte flow cytometer, Acea Biosciences, San Diego, USA) on at least 4 replicates.

2.3.4 Measurement of Oxidative Stress: After treatment cells were trypsinized and fixed with formalin 10% (Sigma, Saint-Quentin Fallavier, France). After 20 min incubation at 4°C, cells were centrifuged at 1000 rpm for 5 min (Eppendor 5910R, Hambourg, Germany). The pellet was dissolved in 100 μL of dihydrorhodamine 123 (DHR) 1x diluted in PBS Triton 0.1%. The cells were incubated with the DHR solution for a minimum of 15 min at room temperature in the dark. After incubation, cells were analyzed with FACS (Novocyte flow cytometer, Acea Biosciences, San Diego, USA). Data were collected using the Software NovoExpress (Acea Biosciences, San Diego, USA) and manually analyzed using Excel.

3.1 Effect of Increasing Concentrations of Reduced Glutathione on Cell Index

Figure 1 shows the effect of increasing concentrations of GSH on the cell index of lung epithelial cell A549. Cells showed a dose-dependent decrease of cell index in response to increasing GSH concentrations (Figure 1A). Exposure to increasing NAC concentrations also induced a dose-dependent reduction of cell index, although reduced compared to the effects of GSH (Figure 1B). The xCELLigence biosensor system allows the continuous measurement of cell index which is in fact an impedance, it depends on cell number and surface occupied by cells, and on adhesion strength of cells to the substrate. Significant decrease in cell index may sign cell death or cell adhesion reduction. To further understand the effect of glutathione, we observed whether glutathione decreased cell number. A 24 hour image acquisition showed that 10 mM glutathione did not induced cell death. Figure 2A shows micrographs obtained before and 8, 16, 24 hours after exposure to 10 mM GSH. No cell death was observed but instead a marked cell surface reduction over time is obvious at 8, 16, 24 hours (Figures 2A). Furthermore, cell labeling with Zombie Red, a fluorescent marker of cells with permeable cell membrane related to cell death induction, confirmed that glutathione did not altered cell integrity even at high concentrations (Figure 2B). 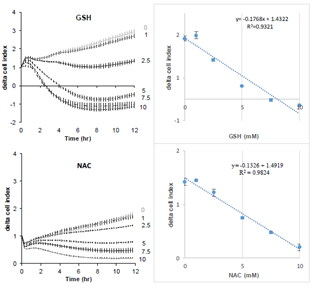 Figure 1: Real-time evolution of delta cell index in response to increasing concentrations of reduced glutathione (top) or NAC (down) on A549 pulmonary cells. Cell index was normalized at the time of treatment. Data are presented as mean cell indexes ± SEM during time (left panel) and correlation curves 8 hours after treatment (right panels), n=8 replicates.

Figure 2: Morphological changes induced by GSH in A549 cells. A: Contrast phase photomicrographs at times 0, 8h, 16h and 24h of a time-lapse in presence of 10 mM GSH. No image of dead cell is visible. Compared to time 0, cell surfaces were reduced at times 8h, 16h and 24h. Scale bar represents 100μm. B: Cell permeability to Zombie Red analyzed by fluorescence quantification in cytometry 2.5 hours after treatment, in a dose-dependent response to GSH (mM). Data are presented as mean of fold changes in Zombie Red fluorescence intensity in GSH treated cells versus control media (n=4). 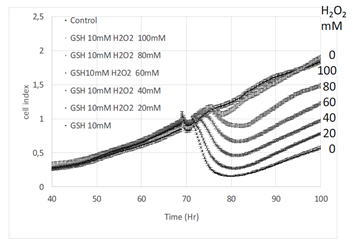 Figure 4: Effect increasing concentrations of glutathione either oxidized (1, 2.5, 5, 7.5 and 10 mM) or reduced (10mM) on real-time cell index evolution of A549 cells (left panel). Delta cell index (final-initial values of cell index after 24 hours) following addition of glutahthione. Addition of oxidized glutathione did not decrease cell index of A549 cells compared to control. Results are presented as mean ± SEM (n=8). Stars indicate significant difference compare to GSH at p<0.05. When not visible SEM are smaller than the symbol.

3.2 Effects of Increasing Concentrations of GSH on Cell Volume

3.3 Inhibition of Intracellular Synthesis of GSH did not impair its Extracellular Action

In the next experiment, buthionine sulfoximine (BSO, 10mM), the inhibitor of γ-glutamylcysteine synthetase was added during 24 hours to A549 cell culture (Figure 6). The inhibitor alone did not change cell proliferation. It had no effect on GSH action since the same inhibitory effect was observed in response to 10 mM in presence as well as in absence of BSO. Indeed, cell index reached values close to zero after GSH addition despite the presence of BSO. The fact that the inhibitor of γ-glutamylcysteine synthetase did not alter the response to GSH is of importance, since it demonstrates that the increase in intracellular GSH concentration is not required to reduce the cell index. This is confirmed by the measure of intracellular concentration of GSH which was significantly decreased after BSO (Figure 6C). Decreased intracellular GSH concentration by BSO did not hampered its effect on cell index when added in the culture medium.

Figure 6: Realtime analysis of the effect of GSH (10 mM) in presence of γ-glutamylcysteine synthetase specific inhibitor, buthionine sulfoximine (BSO) on 549 cells. A549 cells were pre-incubated with BSO (10 mM) during 24 hr. Then GSH 10 mM was added either alone or in presence of BSO. A: the graph shows a similar response between cells pre-incubated with BSO or not, suggesting that the decrease in cell index is not dependent of the intracellular concentration of GSH. Similarly, BSO had no effect on control. B: histogram of delta cell indexes of control cells or cells exposed to BSO alone or GSH + BSO. C: Intracellular GSH con-centrations after 24 hours exposure of A549 cells to GSH or NAC (10 mM) or 24 hours to BSO (10mM) and then 24 hours to BSO+GSH or BSO+NAC. Results are presented as mean ± SEM. Different letters indicate significative differences after one way ANOVA followed by Fisher PLSD at p<0.05.

Figure 7: Effect of ProGA, a γ-glutamylcyclotransferase inhibitor (GCCT) involved in glutathione metabolic cycle. The inhibition of GGCT decreases the intracellular concentration of GSH. ProGA (100 μM) has no effect on control, GSH (A) or NAC (B). Data are presented as mean delta cell indexes +/-SEM (n=8).

Pro-GA is a pro-drug type of N-glutaryl-L-alanine, which penetrates into cells and inhibits the γ-glutamylcyclotransferase (GGCT) which catalyzes the chemical reaction (5-L-glutamyl)-L-amino acid to produce 5-oxoproline and L-amino acid. 5-oxoproline is a precursor of glutamate. The inhibition of GGCT decreases the intracellular production of GSH. Results show that the ProGA has no effect on delta cell index either in control or on the effect of GSH or NAC (Figure 7) on cell index.

Figure 8: Realtime analysis of GSH effect on A549 cell adhesion. A549 cells were loaded at 5000 cells/cm2. Results are presented as mean delta cell indexes ± SEM (normalization to time of loading) during 2.5 hours (left panel). Corelation curve presented in right panel indicates a strong corelation between GSH concentrations and the decrease in adhesion measured by the cell index (n=8).

3.5 Effects of Increasing Concentrations of GSH on Cell Cytoskeleton

The decreased cell adhesion by GSH may reflect intracellular modifications such as actin polymerization. To test that hypothesis we used phalloïdin, the toxin found in cap mushroom, known to bind specifically at the interface of F-actin subunits. FACS analysis of A549 cells labeled with fluorescent TRITC-phalloïdin shows a decreased incorporation of fluorescently labeled molecule following 24 hour GSH treatment in A549 cells attesting a decrease in F-actin (Figure 9). 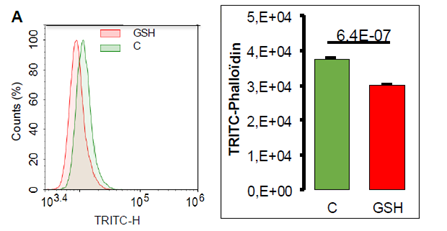 Figure 9: Quantification of TRITC-phalloïdin by cytometry in A549 cells exposed to GSH 10 mM during 24 hours. A- Representative histogram of cell number repartition according to fluorescence incorporation. B- TRITC-phalloïdin fluorescence quantification according to treatment (mean values +/SEM, n=4) with significant Student t-test p-value (p<0.05).

3.6 Effects of Exposure to Increasing GSH Concentrations on Oxidative Stress and its Intracellular Concentration 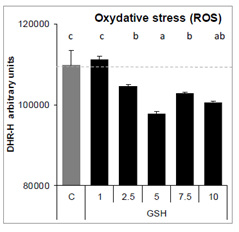