Background and Objective: It is important to make risk stratification for patients with non ST segment elevation MI to reduce mortality, reinfarctions and to improve prognosis. Through the echocardiographic parameters; ejection fraction does not reflect diastolic functions. Tei index is a new parameter representing both left ventricular systolic and diastolic functions at the same time. The aim of this study is to determine the relationship between Tei index and prognosis in patients with non ST segment elevation MI.

Method: Fifty patients (mean age: 60.1±11) with non ST segment elevation MI were included to our study. All the patients were given standard care and managed according to well accepted guidelines. Clinical and laboratry data were collected during hospitalization. Echocardiographic examinations were done on the hospitalization day and 3 months after discharge. Tei index and other echocardiographic examinations were evaluated.

Conclusion: It is concluded that Tei index can be used as a predictive tool for adverse cardiac events in patients with non ST segment elevation MI.

Risk assessment is important to prevent myocardial infarction (MI), recurrent coronary events or death, and to improve prognosis in patients suffering acute coronary syndrome (ACS) with non-ST-segment elevation. Systolic and diastolic dysfunction frequently coexist in MI, even though both isolated systolic and isolated diastolic dysfunction can be identified. The development of congestive heart failure (CHF) after acute MI has been shown to be significantly related to both left ventricular (LV) systolic and LV diastolic dysfunction (1-4). The duration of diastole is an important determinant of myocardial perfusion (5), and the ratio of the diastolic to the systolic pressure-time index is used to assess a relationship between subendocardial oxygen supply and demand (6). Ejection fraction (EF), which is an indicator of systolic function, has been the most studied and accepted parameter among the echocardiographic parameters used for risk assessment. However, EF is inadequate to evaluate systolic and diastolic functions together.

The Tei index, which is measured with Doppler echocardiography, is used to evaluate both systolic and diastolic function. It is and not affected by the geometric structure of the ventricle (7).

The data associated with the Tei index in patients who developed CHF and other complications during and after hospitalization due to acute ST-elevation MI are contradictory and there are publications suggesting the prognostic value of Tei index (8-9).

Our aim in this study is to perform echocardiographic Tei index measurements in patients admitted to our clinic due to non-ST-segment elevation myocardial infarction (NSTEMI) and to investigate the relationship between the Tei index and mortality, CHF, ventricular dilatation, and prognosis during and after hospitalization.

2. Materials and Methods
2.1 Patient Inclusion
We included 50 patients who admitted to the emergency department and evaluated at the department of cardiology of the Mersin University Hospital with the diagnosis of NSTEMI. The patients did not have a history of previous MI. The diagnosis of NSTEMI was based on the presence of typical angina pain that lasts at least 30 minutes and a troponin level of >0.1 ng/mL. Patients with ST-elevated MI or other diagnoses were excluded after serial ECG evaluations. A group of 30 healthy volunteers without previously known cardiovascular disease was included in the study as the control group.

The approval for the study was obtained from the local ethics committee. All individuals participating the study were informed about the procedures and their consents were obtained.

The first part included the findings of physical examination and ECG during the admission to the hospital along with the questions about basic clinical features such as age, sex, and the risk factors for coronary artery disease (CAD).

The second part included the medical treatments given in the hospital, the laboratory parameters such as the highest troponin and C-responsive protein (CRP) levels, and the data related to the echocardiographic examinations.

The fourth section included the echocardiographic parameters measured after 3 months. 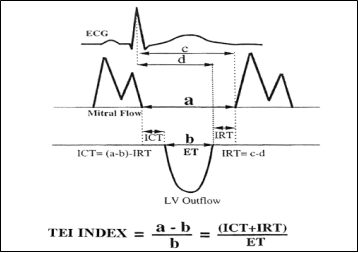 Figure 1: The calculation of the Tei index

To trace mitral flow, the recordings were obtained by placing the “sample volume” as perpendicular to the tip of the mitral valve as possible in the apical four-chamber view. The long axis images were used to calculate the left ventricular diameters.

2.4 Statistical analysis
Statistical analyses were performed using SPSS (Statistical Package for Social Science) for Windows 13.0. Statistical summary tables were prepared to present means and standard deviations for the variables included in the analysis. The Shapiro-Wilk test was used to confirm whether the measured values had normal distribution or not. Corresponding parametric or non-parametric tests were used for the comparisons of the values that do or do not fit the normal distribution. Student’s t-test was used to compare the normally distributed values in two independent groups; Mann-Whitney U test was used for those that were not normally distributed. Paired-samples t-test and Wilcoxon Sign test were used to evaluate the differences between the first and 3rd-moth echo data of the subjects based on the distribution pattern. Chi-squared (?2) analysis was used to analyze categorical data. The statistical significance was set at p<0.05.

3. Results
A group of 50 patients (35 male (70%) and 15 female (30%)) with acute NSTEMI diagnosis were included in the study along with 30 healthy individuals (67% male) without any known cardiovascular disease. The characteristics of the patient and control groups are presented in Table 1.

Table 1. Demographic characteristics of the patient and control groups.

Table 2. Echocardiographic characteristics of the patient and control groups.

There was no difference between the medical treatments given to the patient group (Table 3).

Table 3. Comparison of the medical treatments given to those in the patient group (in terms of the Tei index).

Table 4. Comparison of Tei index, the EF, and the EDT for the surviving patients and the deceased patients.

Table 5. Comparison of the Tei index and the EF in patients who developed MACE and those who did not.

Previous studies have shown that patients with Tei indices above 0.60 are more likely to develop heart failure and have a worse prognosis (10-12). 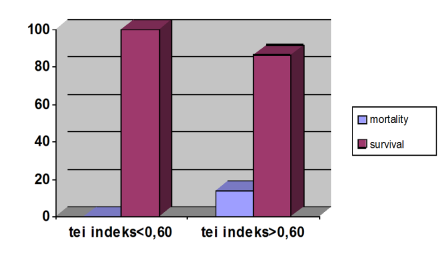 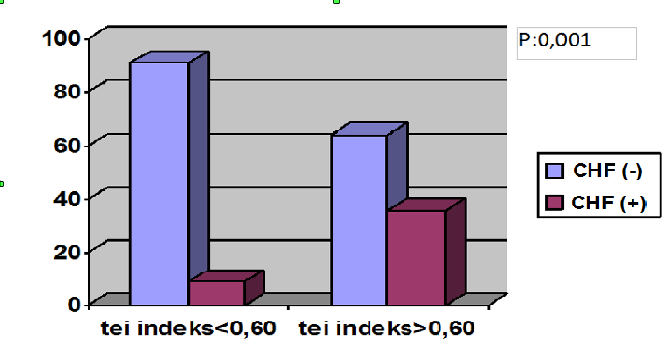 Figure 3. Comparison of the incidence of heart failure in patients with Tei index <0.60 and ?0.60. 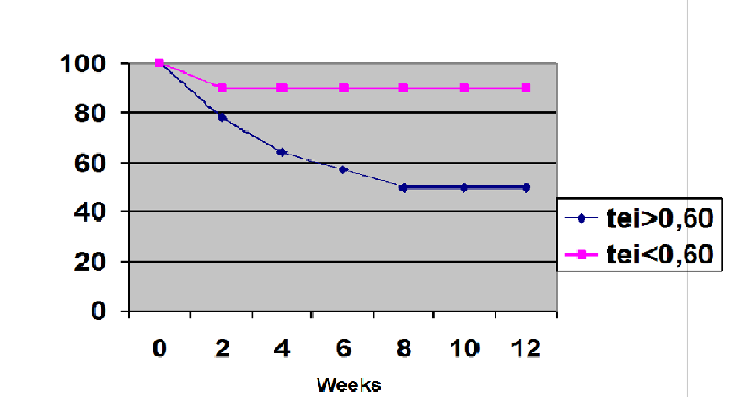 Figure 4. Tei indices by the percentage of cardiac event-free survival in the follow-up.

Figure 5. The change in Tei index during follow-up.

Several studies have shown that the ejection fraction (EF) is a powerful guide in the selection of the appropriate treatment for patients who had a myocardial infarction (MI) and in the prediction of MI-related complications (13,14). However, only the systolic functions can be evaluated with this classical evaluation method. Given that the systolic and diastolic dysfunctions frequently coexist, using a method that can assess both systolic and diastolic functions, rather than a parameter that evaluates them individually, may be more realistic in identifying a general cardiac dysfunction.

The Tei index has been shown to be a powerful, independent predictor of all-cause mortality in patients with MI. Adverse events are rarely seen in patients with a Tei index <0.46 (15). The Tei index was identified as one of the independent determinants of the composite endpoint that include cardiac death, emergency cardiac transplantation as a result of decompensated CHF, and hospital admission in CHF patients with ischemic or dilated cardiomyopathy (16). In patients with severe LV systolic dysfunction (LV EF <30%), those with higher Tei index have a higher overall incidence of clinical conditions such as death from any cause and need for urgent heart transplantation (17).

In one study, when Tei index values of 0.49 and above were determined as the threshold, cardiac dysfunction with combined systolic and diastolic dysfunction together was detected with 96% sensitivity and 86% specificity (18).

In one study, Tei indices on the first day of admission to the hospital and at the first year were higher in the patient group compared with the control group, and in patients who developed CHF or died compared with those who did not have CHF or survived (19). Compared with patients who did not develop CHF, patients who developed CHF in the hospital after acute MI were found to have a significantly higher Tei index (20). The multivariate regression analysis in that study showed that the Tei index values of 0.45 and above were the strongest independent determinant of CHF development in the hospital following acute MI (20).
In addition, the Tei index is an easy and reproducible measurement, as it is not affected too much by parameters such as age, heart rate, and preload.

Of the 50 patients included in our study, 4 died and 12 developed CHF symptoms. We found that Tei indices of patients who died or developed CHF were higher than those survived or did not develop CHF. In light of this finding, it may be suggested that the Tei index can be used as a predictor of mortality and CHF. In a study by Moller et al., one-year life expectancy was 37% among patients with a high Tei index while it was 89% among the patients with low Tei index (21). In our study, the mean Tei index of the patients who died was 0.73 while it was 0.58 for those who survived. No death was observed during follow-up in the group with low Tei index, while a mortality rate of 14% was found in the group with high Tei index. In our study, the mean Tei index was found 0.59 in the patient group while it was 0.39 in the healthy control group; this difference was statistically significant.

In another study of 60 patients by Poulsen et al., the EFs, deceleration times, and Tei indices of acute anterior MI patients were examined on the 1st, 5th, 90th, and 360th days and the relationship between these parameters and cardiac events were investigated (22). It was suggested that Tei index, just like EF, is a parameter that can be used in the evaluation of prognosis (22). In previous studies, 0.60 was used as the threshold value for Tei index. We also separated the patients into two groups with the Tei index below or above 0.60 in our study, based on the echocardiographic measurements performed. The CHF developed at a rate of 35.7% in the group with high Tei index (>0.60) while the rate was 9% in the group with low Tei index (<0.60). These results are in line with the previous studies.

Of the 50 patients included in our study, 12 developed CHF (24%) while 10 were found to have an EF <50% (20%). The symptoms of CHF developed in 2 patients although their systolic functions of the left ventricle were preserved (EF>50%). The Tei indices were calculated as 0.69 and 0.70 for these two patients. This suggests that the symptoms of heart failure in these two patients were due to diastolic dysfunction.

In a study by Poulsen et al., echocardiographic examinations were performed on 64 patients being followed with acute MI diagnosis, and their EF and Tei index values were compared in terms of predicting the development of heart failure in the first week after the infarction. All of the patients who developed heart failure were found to have above-normal Tei index; 5 of these patients had left ventricular EF of more than 50%. Despite the preservation of left ventricular systolic function in these 5 patients, the symptoms of heart failure developed due to diastolic dysfunction (23).

As a result of their study on 799 MI patients, Moller and colleagues found that the left ventricular systolic function was preserved in 33% of the patients who died while overall only 9% of the patients with preserved left ventricular function (Tei index <0.45) had died during follow-up (15). The Tei index and a mitral flow deceleration time of less than 140 ms were found to be important in predicting cardiac mortality but there was no correlation between wall motion score index and mortality.