Should All Scorpion Stings be Followed Up in the Intensive Care Unit?

Aim: In Turkey, as throughout the world, the incidence of scorpion sting cases and the wide-ranging clinical table, extending from local symptoms to death have not been previously estimated. Therefore, through an examination of patients followed up in the Intensive Care Unit (ICU) and the complications, the aim of this study was to evaluate the indications for acceptance of these cases into ICU.

Method: A retrospective examination was made of 59 patients admitted to the ICU of Adiyaman Training and Research Hospital because of a scorpion sting between 2013 and 2016.

Results: All the patients had a unilateral extremity sting, presented at the Emergency Department within 8 hours and were administered anti-venom. In respect of local or systemic complications, thrombus developed in the proximal of the extremity in only 2 patients. With the exception of these 2 patients, all the other cases were discharged within 2 days without complications.

Conclusion: Although the most poisonous scorpion in the world can be found in our region, no case admitted to the ICU in this 3-year period experienced any systemic complications. This is thought to be due to the early presentation at ED within the first 8 hours and that antivenom is produced in our region. In conclusion from this study, it can be recommended that patients with no requirement for the equipment of ICU should not be admitted and patients with local symptoms only should be monitored on the ward.

Scorpions generally inhabit tropical and subtropical climates, living in particular in forested regions, deserts, and stony, rocky regions. Although more than 1500 scorpion species have been identified throughout the world, only about 30 of these are poisonous. Cases of scorpion poisoning in Turkey are seen most often in the South-east Anatolian region [1]. The most poisonous scorpion in the world, the Leiurus quinquestriatus has been determined in the province of Adiyaman and surrounding areas in South-east Anatolia [2]. Furthermore, the poisonous Mesobuthus nigrocinctus (black spotted yellow scorpion) was identified for the first time in the world in Adiyaman and inhabits the area surrounding Mount Nemrut (Ehrenberg 1828, Crucitti & Vignoli 2002).

Although the frequency of scorpion stings remains high, cases of death have rarely been reported [3]. The development of severe toxicity in adults is at the rate of 0.9% [4]. When cases of scorpion sting present at the Emergency Dept, the symptoms are carefully evaluated, the necessary supportive treatments are given, and in the monitoring of symptoms, follow-up can be monitoring in the ED and when necessary transfer can be made to ICU.
Therefore, the aim of this study was to evaluate patients followed up in ICU for a scorpion bite in respect of the indications for admittance to ICU and complications which developed.

A retrospective examination was made of 59 patients admitted to the ICU of Adiyaman Training and Research Hospital between 2013 and 2016 because of scorpion sting and local symptoms. Data were retrieved from the electronic records system and patient files and the patients were evaluated in respect of age, gender, hematological and biochemical values.

The analyses of the variables were applied using SPSS 22.0 (IBM Corp. Armonk, NY, USA) and PASS 3 (Hammer, ∅, Harper D.A.T, Ryan P.D. 2001. Paleontological statistics) software. The conformity to the normal distribution of single variable data was evaluated with the Shapiro Wilk test and of multiple variables with the Mardia test (Dornik and Hansen omnibus) and variance homogeneity with the Levene test. In the comparison of quantitative data of independent groups, the Independent -Samples t-test was used together with Bootstrap results and the Mann-Whitney U (Exact) test with Monte Carlo results. For the comparison of 2 repeated measurements of dependent quantitative variables, the Wilcoxon Signed Ranks test was used with Monte Carlo simulation results and to examine the interaction according to the groups of repeated measurements of the variables, the General Linear Model-Repeated Anova test was used. After controlling the age and gender factors of the variables, the Partial Correlation test was used to examine the correlations between the variables. Quantitative variables are stated in the tables as mean ± standard deviation (SD) and range (minimum-maximum). Categorical variables are shown as number (n) and percentage (%). The variables were examined at a confidence interval (CI) of 95% and a value of p<0.05 was accepted as statistically significant.

Table 2: Comparison of some laboratory values of the patients on the 1st and 2nd days. 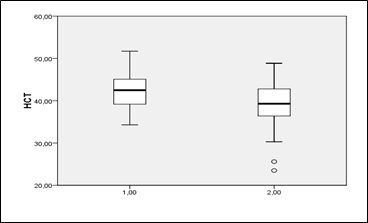 Figure 1: Evaluation of the change in total hematocrit at first and second days

All the patients in the study had been stung once in the extremity. All the patients had presented at the Emergency Dept (ED) within the first 8 hours of the sting and scorpion antivenom had been administered because of complaints of local oedema, hematoma, redness, pain, sensitivity and local numbness in some cases. Admission to ICU was recommended as the local symptoms did not recede during the follow-up. For the patients admitted to ICU with local symptoms, treatment was started of antibiotics, non-steroid anti-inflammatory drugs (NSAID), low molecular weight heparin (LMWH) and IV hydration. Only 2 patients were followed up for more than 2 days in ICU. These were a male aged 54 years with affected right lower extremity and a female aged 56 years with affected right upper extremity and in both cases, circulation problems were experienced due to increased oedema starting in the distal section of the extremity. On Doppler USG the development of widespread thrombus as far as the proximal of the stung extremity was seen and supportive treatment was applied with follow-up for a period of 9 and 12 days respectively. No respiratory or cardiac problems were experienced in the continued follow-up in the ward and both patients were discharged from there.

Scorpion poison is a toxin causing local, systemic and neurotoxic effects within the first 24 hours of the sting. While the poison of some species only causes symptoms such as fatigue and aches, with some other species, death may occur within hours. Although this difference can vary according to the species of scorpion, age, size, amount of venom, nutritional characteristics, climate conditions, whether the poison has reached the venous system or tissues, and the patient’s age, where the patient has been stung can also make a difference [4, 5]. The number of stings of the scorpion and that the person is the first to be stung is important in terms of the effect of the amount of toxin [6]. If the poison is injected into the tissue, distribution around the body will occur in 30-60 mins, whereas if injected into the venous system, it will spread around the body in 4-7 mins. Mixing into the blood circulation causes a worsening of symptoms [7, 8]. Scorpion toxicity usually leads to local reactions and more rarely to systemic symptoms [9].

The fall in the Hb and htc values of the patients on the 1st and 2nd day is hought to be associated with the intravenous hydration applied from the time of admittance. That no significant difference was found in the thrombocyte and RDW values during follow-up of the patients suggested that there was no consumption coagulopathy.

Not all scorpion stings may be poisonous. However, treatment must be planned on the assumption that all scorpion stings cause toxicity. Treatments applied for scorpion stings consist of fluid electrolyte treatment, antibiotics in some cases, tetanus injecton, scorpion antivenom and analgesics [15]. In Turkey, a polyvalent scorpion antiserum is used which is produced in our province obtained from horses stung with the Andractonus crassicauda species scorpion venom. The application of scorpion venom is still a controversial subject. While some authors consider that correct management of the treatment in scorpion poisoning will remove the need for specific antivenom, there are also authors who recommend not administering antivenom [16-18].

Application of the antivenom at the correct time and application of the necessary supportive treatment have been shown in previous publications to significantly reduce morbidity and mortality [20, 21]. In the current study, all the cases presented within the first 8 hours, all were administered with antivenom and no systemic symptoms or mortality were seen in any case. Consistent with previous reports in the literature, all of the current study cases presented in the spring or summer months with a sting on one extremity [22, 23]. All the patients accepted into the ICU in this study were patients who presented in spring or summer, had been stung once on an extremity, had presented at ED within the first 8 hours and had been administered with tetanus and antivenom prophylaxis. That no serious systemic complication developed in any of these patients can be considered to be associated with the time of presentation at hospital and that antivenom treatment was applied. Therefore, there can be considered to be a need for ICU admittance only if systemic symptoms develop in the follow-up of patients monitored in ED, and thus there will be no unnecessary loss of workforce in ICU. Scorpion sting is an event which can cause organ dysfunction and can have a mortal course. With a thorough evaluation of patients presenting at the ED with scorpion sting, timely decision-making and the application of correct treatment, morbidity and mortality can be reduced.

It can be recommended that patients with no requirement for the equipment of ICU should not be admitted and patients with local symptoms only should be monitored on the ward.

Authors are sincerely thankful to the support provided by Dr. Ruslan Abdulayev.