We present a case of tacrolimus intoxication with an achalasia-like esophageal motility disorder in a long term-term renal recipient, who was admitted to hospital because of an acute on chronic kidney transplant injury and newly onset dysphagia. Esophageal manometry secured the diagnosis. Unfortunately despite recovered kidney function the clinical outcome of our index patient was fatal. He deceased in consequence of an extensive esophageal rupture. Our case demonstrates a rare but potentially serious complication of post-transplant patients on calcineurin inhibitors. Calcineurin inhibitor-induced achalasia should be considered in this population when newly onset dysphagia occurs with otherwise negative workup.

Presentation of the Case

Endoscopy ruled out common causes of dysphagia, such as peptic or malignant stenoses, infections or eosinophilic esophagitis. However the lumen of the esophagus was enlarged and the lower esophagus sphincter (LES) was only passable by application of slight pressure. High resolution esophageal manometry revealed hypertensive contraction of the LES (quantified mean resting pressure of 152mmHg [normal range <5-18mmHg]) with inadequate relaxation after swallowing of liquids (mean integrated relaxation pressure [IRP] of 35,5mmHg [normal range <15mmHg]) (Figure 1). The peristalsis of the tubular esophagus was nearly completely absent. The diagnosis of hypertensive LES with transition to achalasia type I due to tacrolimus-intoxication was made. The most likely reason being false tablet intake regimen. Besides intravenous fluid substitution tacrolimus administration was paused until the original target levels of 4-7ng/ml were attained. Kidney function recovered to prevalues. Balloon dilatation was planned as next therapeutic step, however the patient ingested a large amount of food at a family celebration and experienced acute retrosternal pain. An emergency esophagogastroscopy revealed esophageal rupture (Figure 2), which was also confirmed by computed tomography (Figure 3), with extending to the esophagogastric junction. Due to the patient will, an operation was not performed and he deceased. 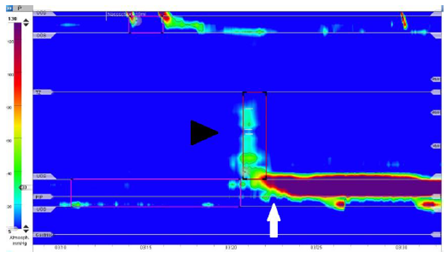 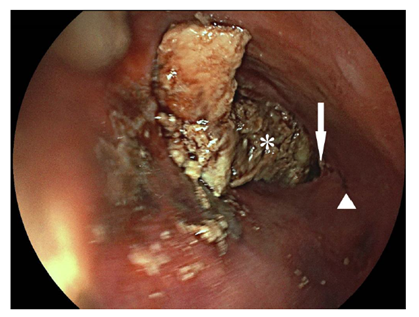 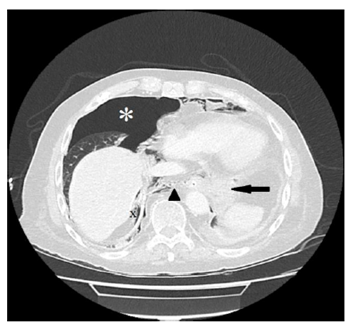