An Intraoperative Dilemma: Absent PL with Abnormal Insertion of FCR

Little known variations in hand anatomy may pose an operative challenge to a hand surgeon. Palmaris longus tendon is commonly known to be absent in the forearm. Abnormality in the insertion of flexor carpi radialis (FCR) tendon is scarcely documented. We present a previously operated case of flexor pollicis tendon repair that was preoperatively planned for an ipsilateral palmaris longus (PL) tendon graft. Intraoperatively the palmaris longus tendon was absent with an abnormal attachment of the Flexor carpi radialis tendon, mimicking the palmaris longus. Pre-planned procedure to use a tendon graft was abandoned and the flexor digitorum superficialis was rerouted to the distal phalanx of the thumb. Even with the known and documented variations in hand anatomy high level of suspicion is required intraoperatively, to prevent untoward complications.

Variations in anatomy is a normal occurrence in any aspect of the human body. Expecting an intra operative variation in anatomy is something a surgeon should be aware and accept in any surgery. Similarly variations in anatomy exist in hand [1] and should be expected by any hand surgeon. Absent palmaris longus or any of its variation is one of the most frequently occurring anatomic anomalies in the upper limb [2]. An absent Palmaris longus has also shown an ethnic variation [3]. In an Indian population the unilateral absence of the palmaris longus tendon is 16 % whereas it is absent bilaterally in 3.3 % of the cases [2]. So, if the patient has an absent Palmaris longus tendon on one side, the chances of it to be absent on the other side are less though not unexpected.

Palmaris longus tendon is a well-developed tendon in the mammals. It is a small slender tendon with a width of 3 to 4.5 mm [4], commonly used for tendon grafting for various indications without any major functional loss. It originates from the medial epicondyle of the humerus and gets attached via the flexor retinaculum to the palmaris fascia. At the level of the wrist it lies between the flexor carpi ulnaris and radialis medially and laterally respectively. Abnormalities in the wrist flexors have been little documented, variations in insertion are unknown [5].

A 35-year-old right-handed male came to us with history of a sharp cut injury to the left thumb with Indian kite flying thread at the level of the thumb metacarpophalangeal joint with inability to flex the thumb. Patient was operated initially in another institution where Flexor Pollicis Longus (FPL) tendon was primarily repaired. Patient was started with flexion exercises next day following which patient felt a snap and was again unable to flex his thumb. Patient had presented to us after 5 days of injury with inability to flex the thumb and edema of the hand. Patient was started on IV Antibiotics and measures to decrease the edema of the hand. He was evaluated before surgery. On examination all movements at the small joints were intact except that of flexion of thumb. He also had loss of sensation on the radial aspect of the thumb. A preoperative plan of tendon graft was made using the PL of the hand was made. The palmaris longus could not be evaluated on the ipsilateral side because of pain and edema. It was found to be absent on the opposite side on clinical examination.

Patient was operated on the 7th day of injury under supraclavicular block under tourniquet. The wound over the thumb was extended to visualize the cut Flexor Pollicis Longus tendon. The distal end of this tendon was seen in the operative field in the thumb but the proximal end could not be seen. The previously explored and sutured incision on the forearm for finding the proximal end of the Flexor Pollicis tendon was used again. This incision was extended proximally for better exploration. The proximal end of the FPL tendon was found in the distal wrist. The tendon ends were found to be frayed and not amenable to primary repair (Figure 1). Decision for tendon graft for FPL reconstruction was then proceeded with. Tendon thought to be the Palmaris Longus tendon was dissected completely. This tendon was more towards the midline and it was a stout tendon supposedly at the site of palmaris longus. 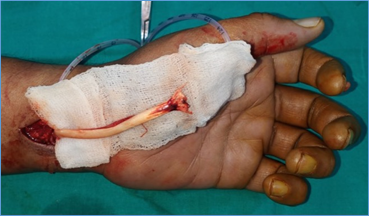 As the thickness of the said Palmaris longus tendon was not in accordance with normal variation and an absent tendon on the opposite site exploration done of the wrist to see for the Flexor carpi radialis and ulnaris tendon. The flexor carpi ulnaris tendon was in its normal anatomical region. The FCR was found to be the initially explored and thought Palmaris Longus tendon but with a misplaced insertion (Figure 2). The FCR being the main stabilizer of the wrist it was of course not touched. Decision was taken to reroute the Flexor Digitorum superficialis tendon of the ring finger to the Flexor Pollicis longus tendon. 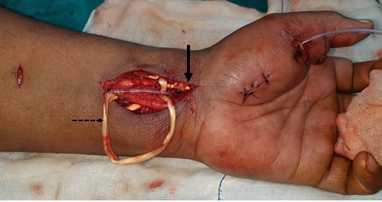 Figure 2: Exploration showing the flexor carpi radialis tendon mainly attached to the third metacarpal (Thick arrow). The dotted arrow shows the ring finger flexor digitorum sublimus being rerouted to the thumb. Also, can be seen an exploratory incision to rule out absent palmaris longus, proximally in the forearm.

Flexor Digitorum Superficialis was rerouted using an Infant feeding tube by rail roading technique to bring it into the thumb. The distal end of the FPL tendon was dissected out. Using a ‘pull out suture over button’ technique the tendon was attached to the distal phalanx of the thumb through a slit in the FPL end. Tension adjustment was done with wrist in slight extension and flexion in the thumb at the IP joint. The radial digital nerve of the thumb was repaired. All incisions were closed and tendon integrity assessed using tenodesis effect (Figure 3).

Post-operative patient was mobilized with a dorsal blocking splint and thumb in palmar abduction for 5 days after which active extension exercises were started. After 2 months patient has developed independent flexion of the thumb though he has some limitation in terminal extension. Patient is on gradually increasing load bearing exercises for developing thumb strength.

The palmaris longus is considered as a retrogressive muscle type with many types of variation including agenesis, variation in shape and for, aberration in origin and insertion, duplication and triplication et cetera [6]. In a somber study The PL tendon has been confused with median nerve and used as a tendon graft [7, 8]. Thus, median nerve is known structure to be commonly confused with Palmaris longus tendon. But there is no record of flexor carpi radialis being mistaken for the former. Variations in the flexor carpi radialis muscle have been documented in very few studies. The variations documented are mainly in the origin, type of muscle belly and length [9]. Insertion of the muscle is mainly on the 2nd and 3rd metacarpal bases via two slips Insertion to only the third metacarpal base and via accessory slips to the palmaris fascia have been reported [10]. Flexor carpi radialis attached mainly to the third metacarpal and accessory slips to the palmar fascia above the flexor retinaculum may present a confusing picture of the tendon being palmaris longus (Figure 2). It takes great suspicion on part of the operating surgeon to exactly identify the correct tendons.

The Flexor carpi radialis tendon is a stout circular tendon with a diameter of 0.42 ± 0.12 cm range (0.3-0.7)5 as compared to the palmaris longus tendon which has a diameter of 4.2 ± 0.8 mm [4, 11]. Though not much difference is seen in the diameters the tendon widths have been measures in maximum cross-sectional areas. The palmaris longus is a flattened tendon [6] whereas the Flexor carpi radialis tendon is a stout circular tendon with multiple accessory slips. This crucial point of difference is to be kept in mind especially when such anatomical variants are encountered while operating to prevent untoward incidences like cu ``````````````````````tting the Flexor carpi radialis tendon. Another method of differentiating the tendons at the wrist in view of any confusion is by tugging the tendons and watching distal movements in the joints. In this case as the variation incurred was presence of an accessory slip between the flexor retinaculum and the flexor carpi radialis tendon the tug test becomes difficult to interpret at the first go. Thus, to conclude known variations can be easily kept in mind and a solution can be preplanned before surgery while operating hand cases. It is only with high level of suspicion and experience can various unknown or undocumented variations can be ruled out and a life boat prepared intraoperatively to prevent jeopardizing complications.

This study was approved by our institutional review board.

Statement of Human and Animal Rights

This article does not contain any studies with human or animal subjects.

There is no identifiable information about this patient in the case report.

The author(s) received no financial support for the research, authorship, and/or publication of this article.