Clinical Utility of An Implantable Cardioverter-Defibrillator Lead With A Floating Atrial Sensing Dipole: A Single-Center Experience

Background: Single-chamber ICD systems with the ability to sense the atrium have been developed. We describe the operation characteristics, atrial and ventricular sense performance of the lead, atrial and ventricular tachyarrhythmia recordings, and appropriate and inappropriate shock treatments in patients who receive a single lead ICD with a floating atrial sensing dipole in our center.

Methods: We retrospectively analyzed the data of 58 patients (44 male, 59.3 ± 4.41 years) who were implanted with a Lumax 540 VR-T DX device with a Linox Smart S DX lead. The pacemaker records of the patients were analyzed monthly for 12 months. All of the recorded tachyarrhythmia episodes were examined by 2 cardiologists and atrial/ventricular discrimination was performed. We also compared with SMART algorithm.

1. Introduction
Implantable cardioverter defibrillators (ICDs) are known to prolong survival by reducing the risk of sudden death in high-risk patient groups. Particularly, there is a debate about whether a single or dual chamber pacemakers should be implanted in patients who do not need a pacemaker. In the majority of patients with ICD implants, single chamber systems are preferred [1]. However, inappropriate shocks seen in single-chamber pacemakers affect patients' quality of life negatively. In previous studies, inappropriate shocks from supraventricular tachyarrhythmia have been reported in approximately 11.5% - 17.4% of patients with ICD implants [2,3]. An atrial sensing mode that can differentiate supraventricular tachyarrhythmia (SVT) from ventricular tachyarrhythmia (VT) will reduce the risk of inappropriate shocks [4-6].

Furthermore, continuous monitoring of the atrium may provide very useful information in terms of atrial arrhythmias. Atrial fibrillation is the most common arrhythmia in patients with heart failure and AF has been detected in 1/3 of patients without atrial arrhythmia within 3 years after ICD implantation [7]. Early detection of AF is useful in two ways. The first is to identify the most important cause of improper shocks, AF, and to prevent inappropriate shocks [3,8,9]. The second is to identify the patients with AF, to start antiarrhythmic therapy in these patients and perhaps more importantly to prevent thromboembolic events by starting anticoagulant treatments [10].

However, a lead should also be placed in the atrium to monitor the atrium. Placing an extra lead in the atrium prolongs the procedure, increases cost, and increases complication rates [1,11-13]. In a previous study, the peri-procedural complications and the risk of in-hospital mortality were increased with dual chamber devices compared to the single chamber devices [11]. Similarly, Peterson et al. showed that dual chamber ICDs had a twofold  increased risk for cardiac tamponade and mechanical complications compared to single chamber ICDs [1].

Therefore, single-chamber ICD systems with the ability to sense the atrium have been developed. The system with Linox Smart S DX lead has been shown to be safe and effective [14-18]. In this article, we describe the operation characteristics, atrial and ventricular sense performance of the lead, atrial and ventricular tachyarrhythmia recordings, and appropriate and inappropriate shock treatments in patients who receive single lead ICD with atrial dipole in our center.

2.2 Biotronic DX ICD System and SMART Algorithm
The lead is a ventricular lead [7,8] with atrial bipolar sense, and there are 2 electrode rings at 150 mm distance to the lead tip (Figure 1). Atrial electrodes are in the atrium and are not in direct contact with myocardium (Figure 2). Geometric area of each atrial electrode is 24.5 mm2 and they are coated in porous form. This coating facilitates the detection of intracardiac signals by expanding the electrochemical active surface area 1000 times [19]. DX ICD devices do not have an atrial pace feature, but can be operated in VDD mode if desired. To prevent the loss of atrial signals, DX devices use an amplifier that increases the atrial gain by 4 fold (Figure 3). High-gain atrial signals are then filtered to distinguish them from signal frequencies outside the atrial signal ranges (30-70 Hz).

2.3. Implantation Procedure
Implantation procedures were performed according to the standards of our center. Implant location, lead position and X-ray duration were recorded. Post-procedure electrical measurements such as P and R wave amplitudes, pacing threshold values and impedances were recorded. A standard VT or VF zone was not set.

2.4 Follow-up
The pacemaker records of the patients were analyzed monthly for 12 months. All of the recorded tachyarrhythmia episodes were examined by 2 cardiologists and atrial/ventricular discrimination was performed. Also, they were compared with SMART algorithm. Inappropriate shocks have been identified. 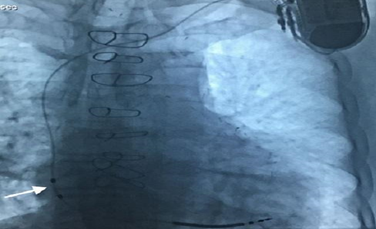 Figure 2: A patient with the Linoxsmart S DX lead implanted. Note the floating atrial dipole is positioned in the high-mid right atrium (arrow). 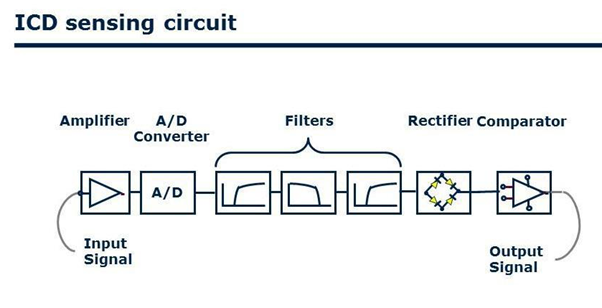 Figure 3: The schematic shows atrial signal processing in the Biotronik DX ICD system, which includes a dedicated atrial input stage with up to 4-fold signal amplification and noise filtering. 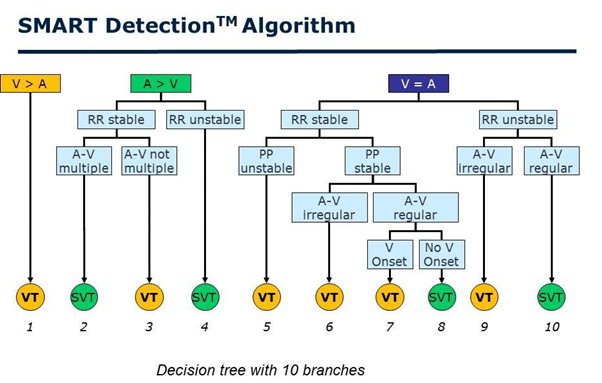 2.5 Statistical analysis
The data were analyzed as mean and standard deviation. Linear mixed model analysis was used to compare the impedance measurements with the P-wave and R-wave changes in the follow-up. The SAS program MIXED procedure (version 9.4) was used for statistical analysis.

3.2. Implantation
The mean duration of fluoroscopy was 3.81±0.76 minutes. The left subclavian region was the preferred ICD implant site for all patients. In 56 (96.6%) of the patients, the lead was placed in the apical position. During implantation of the device, P wave amplitude was 3.54±0.74 mV; R wave amplitude was 12.8±2.11 mV; ventricular pacing threshold was 0.79 ±0.13 V; ventricular pacing impedance was 561 ± 54.8 Ohm; and the shock impedance was 73.9 ± 9.76. Implantation information is summarized in Table 2. Amplified P wave amplitudes also showed differences during follow-up, but no statistical difference was observed. No change was observed in R wave amplitudes and threshold values.

3.3 Arrhythmia Analysis
A total of 24 tachycardia with rapid ventricular response were detected in 7 patients. Since 3 of them were in the VF zone, they were treated by ICD appropriately without using the SMART algorithm. In one of the patients who were treated with this shock, it was detected that the shock was given inadequately as a result of over-perception of high-frequency non-physiological signals. Nine of 21 tachycardia episodes were evaluated as VT by SMART algorithm. The remaining 6 episodes (3 episodes were non sustained VT) were treated according to the treatment programmed by the device. The visual analysis performed by cardiologists showed that VT attacks were detected correctly by the algorithm. Twelve tachycardia episodes were evaluated as SVT by the algorithm, based on parameters such as equal atrial and ventricular velocity, stable atrial and ventricular rhythm, and constant PR interval. The device did not apply treatment. It was confirmed in visual analysis.

3.4 Atrial Arrhythmia Analysis
A total of 38 atrial tachycardia episodes were detected in 8 patients. Of these, 23 AF episodes were evaluated in 3 patients without previous AF history. It was confirmed by visual analysis that these attacks were correctly detected by the SMART algorithm and not treated.

4. Discussion
In this article we shared the experience of our center with a single-lead ICD system with atrial sense ability. In fact, this concept was introduced in the 1980s with the insertion of VDD pacemakers to protect AV synchronicity in patients with complete AV block and preserved sinus node function [21]. However, instabilities in the atrial sense lead to the loss of AV synchronicity, and currently less than 1% of pacemakers implanted in the USA is in this mode [22]. However, the majority of ICD patients does not need a place during implantation and the risk of symptomatic bradycardia is also low [23]. In a recently published study, only 7% of patients undergoing subcutaneous ICD required a pace [24].

It has been shown that dual-chamber devices are better than single-chamber devices to distinguish supraventricular arrhythmias, but this benefit has not been clearly demonstrated for inappropriate shocks [25]. Despite the advantages of recognizing and distinguishing tachycardias, the increased risk of complications of second lead, the risk of mortality and morbidity, and the use of dual-chamber devices remain limited [11,26,27]. The LinoxSMART S DX system which was designed and developed for this purpose has efficacy similar to dual chamber systems, with complication rates as low as single chamber devices [28].

Since a separate lead was not placed in atrium, the duration of the procedure and the duration of total fluoroscopy were low (3.81 ± 0.76 min]. This duration is similar to the one in previous studies conducted with this lead [16,18]. It is also shorter than 6.25 minutes measured in single-lead dual-chamber ICD systems [29].

The main problem in single chamber systems is that there is not enough atrial sense. In our study, the mean P wave amplitude was 3.54±0.74 mV during the process. During the follow-up, the P waves amplified by the device were checked and no significant decrease in the amplitudes was detected. Stazi et al. have shown that atrial signals can be amplified up to 4 folds [17]. Other studies using the DX ICD system have also found that the stability of atrial signals is acceptable [18,30]. In the study by Iori et al., daily P wave measurements were made using the Biotronic Home Monitoring system and a mean value of 4.2 ± 1.9mV was obtained during the 200 day period. The measured R waves were stable over time [30].

In the ADRIA study, 249 patients were randomized to DX ICD and conventional dual chamber ICD systems [16]. Both arms were found to be similar in terms of discrimination of supraventricular arrhythmia. The specificity in discrimination of supraventricular tachycardia was 61.8% in the DX arm and 66.2% in the other group. The published clinical experience with the new generation of DX is limited. A total of 88 spontaneous tachyarrhythmia episodes were detected in 23 patients in the Linox DX study. All 15 ventricular attacks were detected and successfully treated. In 74% of non-ventricular tachyarrhythmias, treatment was stopped appropriately [18].

In our study, all but one of the ventricular tachycardia and ventricular fibrillation attacks were correctly detected and treated by the device. In the patient with improper shock, it was found that the overperception of high frequency non-physiological signals resulted in improper shock. It seems that there is a lower rate of inappropriate shocks compared to other studies [18,31]. Twelve of episodes with high ventricular rate were evaluated as SVT by SMART algorithm based on parameters such as equal atrial and ventricular velocity, stable atrial and ventricular rhythm, and constant PR interval. Previous studies have shown that the SMART algorithm succeeds in VT discrimination at high ventricular rate [30]. It has been determined that DX ICD can successfully distinguish supraventricular tachycardia in our study. Paroxysmal AF attacks were detected in 3 patients who were not previously diagnosed with AF. Anticoagulant treatment was initiated and the risk of thromboembolism was reduced in these patients. In the ASSERT study, 10.1% of patients developed atrial tachyarrhythmia during a 3-month period [7]. Daily assessments with remote monitoring systems has proven impact on the early recognition of atrial tachyarrhythmia and the risks, and the effectiveness of treatment [10,32-35]. Especially diagnosis and treatment of subclinical AF patients at an early stage significantly reduces mortality and morbidity [36].

In this study, a small number of patients and arrhythmia events were retrospectively investigated. However, the number of patients is higher than other studies in the literature. The ability of the DX ICD system to distinguish arrhythmia has not been specifically investigated in this study. No special programming has been done to reduce inappropriate shocks. There is a need for further work on improper shocks. Perhaps the most important limitation is that home monitoring is not used in the measurement of P waves in patients.

5. Conclusion
Single lead ICD systems with atrial dipole provide reliable atrial recordings during sinus rhythm and arrhythmias. The specialist can have the necessary knowledge that can discriminate SVT/VT and detect early AF without placing a second lead. In addition, procedural difficulties and subsequent complications brought about by a second lead are avoided.

Disclosure and Conflict of Interest
None