Objective: To evaluate diabetogenic and lipid profiles among subjects with or without vitamin D deficient male subjects.

Subjects and methods: From a target population of adult male patients selected after several exclusion, we had a final total sample size of 133, which were evaluated among two groups formulated based upon whether having vitamin D deficiency or otherwise. We further compared diabetic and lipid indices including fasting plasma glucose, glycated hemoglobin (HbA1c), total cholesterol, fasting triglycerides, LDL cholesterol and HDL cholesterol among the vitamin D deficient group and vitamin D non-deficient groups by using Independent sample t-statistics.

Recent evidence have highlighted a link between diabetes mellitus and vitamin D deficiency, which has promoted researchers to explore vitamin D as a treatment prospects for diabetes mellitus, especially type-2 diabetes mellitus [1]. Though the functional role of vitamin D as immune modulatory agent and anti-proliferative agents are not well-documented but still the association between the two under evaluation categories is yet debatable [2]. The data with reference to vitamin D is so much prevalent on pubmed and other search engines that vitamin D seems like a panacea for multiple diseases beyond mineral or bone metabolism [3-5]. This approach has not only resulted in overambitious use of both vitamin D diagnostics, which are expensive but also exuberant use of vitamin D with most drug prescription without realization of the effects of hypervitaminosis D [6-8].

Diabetes mellitus is one such metabolic disorder which have been associated with deficient vitamin D associated in multiple studies [9,10]. Alongside there is also contrasting evidence which does not conclude an association or beneficial effect of vitamin D supplementation for diabetes mellitus [11,12]. More importantly, it seems pertinent here to quote the viewpoints of Institute of medicine (IOM) and the Endocrine Society which not only differ on the reference ranges for vitamin D, but also the former group suggest otherwise to vitamin D as potential factor for causation of type-2 diabetes mellitus [13,14]. Contrary to IOM’s stand point the Endocrine Society suggests the evidence from various observational studies to be enough for suggesting vitamin D as a as treatment modifier in type-2 diabetes mellitus [14].

Moreover, the major source of vitamin D is ultraviolet rays from sunlight, which are dispersed differentially across the globe depending upon you live in tropics or away from the equator. Similarly, the major initiator step in vitamin D metabolism is the skin where different races tolerate and utilized vitamin D different for obvious physiological and morphological differences [15]. Regional data suggests varying results as people have differential exposure to sunlight; however few studies have shown vitamin D deficiency with diabetes [16].

This study was carried out at the department of pathology PNS HAFEEZ hospital, Islamabad after formal permission from hospital’s “ethical review committee” approval from Jan-2018 to Nov-2018 among male subjects. The sampling technique was based upon “non-probability convenience based method”. Male diabetic patients who had who of age greater than 30 years without associated ischemic heart disease or any other acute or co-morbid medical or surgical condition taking any other medicine other than anti-diabetic medication, were included in the study. Alongside age-matched male patients without any history of medical or surgical disease visiting hospital as part of executive clinical and laboratory screening were also recruited in the study. Bothe categories of patients were explained about the nature of the study, type of testing and consequent study data utilization following a written signature with a mandatory requirement for formal participation into the study. Subjects who did not further volunteer, were not in exact medical fasting status, were taking other medications including pain killers or vitamin supplements or suffering from any chronic or acute health conditions were excluded form study. After formal consent all subjects regardless of patients or controls were interviewed according to a formatted pattern, anthropometric parameters were measured as per WHO criteria. Blood was collected in Sodium fluoride, EDTA, plain gel tubes for measurement of biochemical parameters and vitamin D. Analysis of glucose and other biochemical parameters were carried out on random access clinical chemistry analyzer (Selectra proM) and vitamin D and HbA1c was analyzed by Chemi-luminescent Microparticle Immunoassay (CMIA) on ARCHITECT I system supplied by Abbot diagnostics. Glucose was measured using GOD-PAP method, while cholesterol and triglycerides were analyzed by CHOD-PAP and GPO-PAP method on Selectra-ProM clinical chemistry analyzer. LDL-cholesterol and HDL-cholesterol were measured by direct enzymatic, selective end-point method using selective detergent and direct enzymatic, selective end-point method using accelerator selective detergent method on Selectra-proM clinical chemistry analyzer.

All data was entered into SPSS- program. Descriptive statistics for age, time spent during outdoor exercise and major dietary choice were evaluated by SPSS>analyze>descriptive statistics. Independent sample t-test was employed to measure the differences for various anthropometric, diabetogenic and lipid parameters among vitamin D deficient and non-vitamin D deficient subjects. A p-value of 0.05 was considered as significant. 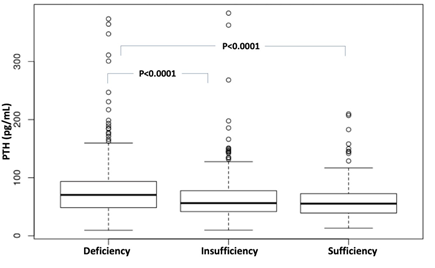 This study has demonstrated that vitamin D deficiency is associated with diabetogenic tendencies. This patterns was clearly demonstrated for glycated hemoglobin where a clear rise in levels was observed among with vitamin D deficiency. Similarly, fasting plasma glucose results also showed lower values for subjects with higher vitamin D to ones with either insufficient or deficient vitamin D levels. Review of literature linking diabetes and vitamin D deficiency shows mixed data where both for and against notions our findings can be found. Our results, however are in accordance with most available research data [9,10,13,17]. Though supporting data, including ours is available to show a link between vitamin D and diabetes, still multiple studies are available in literature where no association was observed [11,12,14,18]. Jorde et al demonstrated in placebo controlled trial that cholecalciferol administration did not prevent type-2 diabetes mellitus even 40000 IU/week for 6 months [19]. Another recent randomized control trial by Gulseth HL et al utilizing 2000000 IU of Vitamin D3 in 62 subjects also were not able to show any improvement in insulin sensitivity or diabetes markers [20]. Pilz et al have reviewed the data on supplementing type-2 diabetic subjects with vitamin D but found them not being useful [21]. The evidence favoring our findings can be presented as: The data from experimental animal models implicate an impaired insulin secretory response in diabetes which was rapidly corrected on vitamin D supplementation [22]. Another important and pivotal finding which support our results could be the discovery of vitamin D receptors (VDR) in extra-renal tissues including pancreatic beta cells, which can signify the role of vitamin D in progression of beta cells downhill course leading towards diabetes [23]. Another physiologically important process linked to insulin secretions is the flux of calcium from beta cells which indirectly helps beta cell integrity of function [24]. Another factor linked to calcium metabolism is the cytosolic protein calbindin which apart from its calcium homeostasis maintenance in cytosol have also been associated with synthesis of insulin beta cells [25]. Moreover, other factors like the renin-angiotensin aldosterone system (RAAS) have also been demonstrated to have been affected indirectly by vitamin D to reduce insulin resistance [26]. Finally, evidence is also there about vitamin D protecting the beta cell from cytokine caused apoptosis, thus helping optimal beta cell life in time of high inflammatory presence of the TNF-alpha and NF-kB [27]. Thus the aforementioned shared physiology and supporting studies referenced above emphasize further the importance of our results [9,10,13,17,22-27].

We did not demonstrate statistically significant difference in various lipid parameters and vitamin D based groups but still worse lipid levels were observed for total cholesterol, LDL-cholesterol and triglycerides. In this regard some data in literature review may not augment our findings as highlighted by Jiang et al and Wang et al [28, 29]. Nonetheless there data supportive to our findings as highlighted by Ponda et al where lipid parameters were not improved even after vitamin D supplementation [30].

We feel certain to our study needs to be acknowledged: Firstly, we believe our study had small sample size due resource availability, hospital setting, cross-sectional design and lack of funding, so possibility of type-2 statistical error remains a possibility for lipid studies. Furthermore, we anticipate regional differences to be very pertinent as distance from equator may affect vitamin D levels uptake by skin differing between races [31]. Moreover, we also feel that a regional and race wise reference values are needed by planning an epidemiological study.

We believe our original data has got significant implications as we were able to establish an association between low vitamin D levels and indices of diabetes. Further RCTs and data may be planned therefore, to assess if pharmacological addition of vitamin D to diabetes treatment may reduce diabetes incidence and severity in known diabetic patients.

Ethical approval: The project “Comparison of diabetogenic and lipid profile among vitamin D deficient and non-deficient male subjects: A study from Islamabad” was approved by PNS HAFEEZ hospital’s ethical review committee. All subjects signed informed consent written consent Performa after they were explained regarding study project.

Availability of data and materials: SPSS data outputs are available for review from corresponding author, if requested.

Consent for publication: Sign written consent was taken from all study participants.

Data funding: The study had no funding source to disclose.

The authors acknowledge the work of Mr. Amin, Lab technician Ibrahim for the support and help.