Diagnosis and Management of Hyperkalemia

Potassium (K+) is the most abundant intracellular cation. Intracellular K+ concentration is around 150 mEq/l, while its extracellular concentration is 3.5-5 mEq/l. Serum K+ is determined by intake, excretion, and transcellular distribution. The kidneys and the adrenal glands regulate K+ excretion. Hyperkalemia is mainly seen in patient with impaired renal function (acute kidney injury or advanced chronic kidney disease) or in patients with decreased mineralocorticoid (aldosterone) activity. Certain medications can result in hyperkalemia in patients with impaired renal K+ excretion. Aldosterone is the key regulator of renal K+ excretion. Hyperkalemia (serum K+ ≥ 5.5 mEq/l) has multiple manifestations; however, cardiac arrhythmias are the most serious. Detailed history and basic laboratory tests are required to diagnose hyperkalemia. Hyperkalemia is treated medically; hemodialysis is reserved for severe and emergency cases.

Hyperkalemia is defined as serum K+ concentration ≥ 5.5 mEq/l. K+ physiology including homeostasis and renal transport has been described in detail in a recent article by the author [1]. The average intake of K+ in individuals on a western diet is 60-140 mEq/day. The kidneys excrete 90% of K+ and the rest is excreted in the stool [2]. Figure 1. K+ excretion in stool increases in stage 4 and 5 chronic kidney disease (CKD) and in patients on renal replacement therapy (RRT). K+ homeostasis is maintained by the kidneys [3]. Large shifts in extracellular K+ do not occur because K+ moves into or outside the skeletal muscles maintaining extracellular K+ within a tight range. Insulin, catecholamines (via β2 receptors) and alkalemia result in intracellular shift of K+. Increase in serum osmolality and normal anion-gap hyperchloremic metabolic acidosis result in extracellular K+ shift. After a meal, hyperkalemia is prevented due to insulin secretion which shifts K+ intracellularly until it is renally excreted. 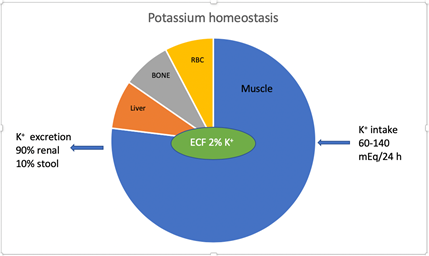 There are two types of K+ channels in the cortical collecting duct [5]. Table 1.

Table 1: Types of K+ channels in the cortical collecting duct.

There are four major factors that determine K+ secretion in the collecting duct [6]:

Increased intake of K+ can rarely result in hyperkalemia in absence of a renal or adrenal abnormality because of the ability of the normal kidneys to adapt and excrete K+. It has been shown that urinary K+ excretion can rise to almost 400 mEq/24 h to match increased oral intake of K+ with only a small rise in serum K+ [10]. The focus of the differential diagnosis is on impaired renal K+ excretion due to renal disease, decreased mineralocorticoid (aldosterone) activity, and certain medications. Transcellular shift of K+ is seen in some conditions, while pseudohyperkalemia is uncommon. It is important to know that several factors can simultaneously contribute to hyperkalemia, for example, hyperkalemia in a patient with stage 5 CKD due to diabetic nephropathy with underlying hyporeninemic hypoaldosteronism syndrome, who is on an angiotensin converting enzyme inhibitor (ACEI) and spironolactone. Table 2.

2.2.1 Pseudohyperkalemia: Pseudohyperkalemia is seen in patients with thrombocytosis (platelets > 500 x 109 /L), and severe leukocytosis (>75 x 109/L). It can also be seen due to release of K+ from RBCs due to trauma resulting from tourniquet application and specimen transportation [11].

2.2.2 Hyperkalemia due to transcellular shift of K+: As mentioned above an increase in serum osmolality (as in hyperglycemia) and normal anion-gap hyperchloremic metabolic acidosis (mineral acidosis) can result in transient hyperkalemia due to extracellular K+ shift. High anion-gap (organic) metabolic acidosis does not result in significant hyperkalemia. Therefore, hyperkalemia in diabetic ketoacidosis (DKA) is the result of insulin deficiency which shifts K+ extracellularly by reducing the activity of the Na+-K+-ATPase pump, impaired renal K+ secretion due to reduced kidney function associated with volume depletion and hyperosmolality [12]. The role of organic acidosis (ketoacidosis) is minor. Severe transient hyperkalemia can result from cell damage as in tumor lysis syndrome, rhabdomyolysis [13] and severe hemolysis [14]. Hyperkalemic periodic paralysis results in transient hyperkalemia and subsequent severe muscle weakness or paralysis. Attacks last less than 24 h (usually < 2 h) and is more common in the morning and after ingesting K+ rich food products. Most patients are young (< 20 years old). The cause is a mutation in the sodium (Na+) channel gene SCN4A [15].

2.2.3 Hyperkalemia due to impaired renal excretion:

Acute kidney injury (AKI): hyperkalemia is common in AKI [16] especially in oliguric patients and in patients with cell damage such as rhabdomyolysis and tumor lysis syndrome [17]. Hyperkalemia results from direct injury to the principal cells in the collecting tubule.

Hyperkalemia has multiple manifestations, of which cardiac conduction abnormalities are the most serious.

The association between serum K+ and mortality is U-shaped. A study based on medical records review of  > 900,000 patients showed that adjusted all-cause 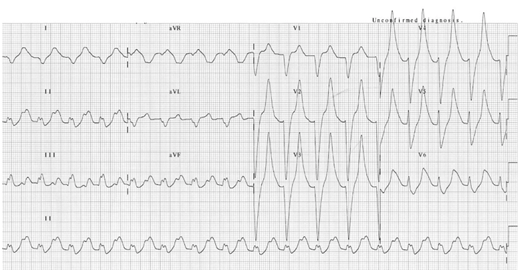 Figure 3: ECG in a patient with a serum K+ of 9.3 mEq/l. It shows peaked T waves and wide QRS complexes. ECG is courtesy of #FOAMed Medical Education Resources by LITFL is licensed under a Creative Commons Attribution-Noncommercial-ShareAlike 4.0 International License. Based on a work at https://litfl.com. 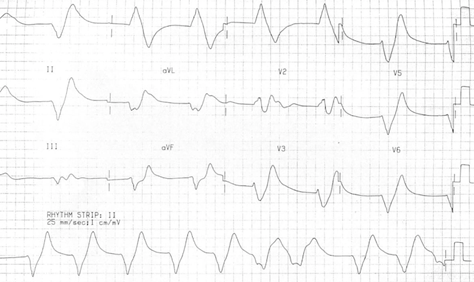 Figure 4: Sine waves in a patient with K+ 9.9 mEq/l.  ECG is courtesy of #FOAMed Medical Education Resources by LITFL is licensed under a Creative Commons Attribution-Noncommercial-ShareAlike 4.0 International License. Based on a work at https://litfl.com. 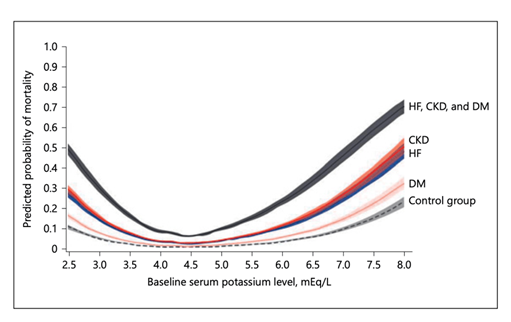 Figure 5: Serum K is a continuous variable with all-cause mortality. Courtesy of Am J Nephrol 2017;46:213–221 DOI: 10.1159/000479802 This article is licensed under the Creative Commons Attribution- NonCommercial-NoDerivatives 4.0 International License (CC BY- NC-ND) (http://www.karger.com/Services/OpenAccessLicense).

When approaching a patient with hyperkalemia, the following principles should be kept in mind:

The clinician should distinguish between hyperkalemic emergencies and nonemergent hyperkalemia.

Myocardium membrane stabilization: This is the first priority in patients with ECG changes. It is achieved by giving calcium gluconate 10 ml of 10% solution over 5-10 minutes [42]. This will antagonize the effect of K+ on myocardial cell membrane but will not shift or eliminate K+. Onset of action is immediate with a duration of 30-60 minutes. Intravenous calcium should be avoided if the patient is on digitalis due to several case reports of sudden cardiac death in this patient population [43].

Elimination of K+: Loop diuretics can be utilized to eliminate K+ in patients with adequate urine output [42]. K + free intravenous fluids can be given simultaneously to prevent volume depletion and facilitate further K+ elimination. Hemodialysis (HD) is the definitive management option for severe and recalcitrant hyperkalemia [48]. K+ elimination starts immediately in HD. The above treatment options should precede HD due to the logistics related to obtaining dialysis access (if the patient is not already on chronic HD) and preparing the HD machine. K+ binders may be used in addition to the measures mentioned above. Time of onset can be hours. K+ binders should never be the sole treatment in hyperkalemic emergencies. Until further data is available, K+ binders should not be used in hyperkalemia in the immediate post-operative period. Other important considerations include treatment of underlying causes of hyperkalemia (e.g. insertion of a Foley catheter in a patient with obstructive uropathy, and K+ free intravenous fluids in patients with volume depletion), initiation of low K+ diet, and discontinuation of mediations or supplements that are contributing to hyperkalemia. Serum K+ should be checked every 2 h following the above measures to document adequate reduction. If hyperkalemia persists, the above measures should be repeated, and hemodialysis initiated.

Patients in this category usually have mild and chronic hyperkalemia. The focus is on dietary counseling, medications and supplements review, and the use of K+ binders. Further benefit may be derived from the addition of loop diuretics (thiazide diuretics may be used in patients with eGFR > 30 ml/min/1.73 m2) and oral sodium bicarbonate tablets (in case of metabolic acidosis). Fludrocortisone is a consideration in patients with hyperkalemic RTA, however, hypertension and volume overload limit its usefulness [49].

Low K+ diet: It should be advised to all patients with chronic hyperkalemia. The recommended amount of K+ is 2 g (50 mEq or mmol) in 24 h. Detailed information on how to advise patients on low K+ diet is available [50].

Medications and supplements review: Patients should stop taking K+ containing salt substitutes. K+ supplements such as potassium chloride or potassium gluconate should be stopped as well.

Potassium binders: K+ binders should be considered in patients with persistent chronic hyperkalemia despite dietary interventions and in patients with strong indications for certain medications associated with hyperkalemia. Examples are patients with chronic systolic heart failure who require RAAS inhibition and patients with proteinuric CKD such as diabetic nephropathy who require an ACEI or an ARB. Newer K+ binders (patiromer and sodium zirconium cyclosilicate) are good options for these patients because giving a suboptimal dose of RAAS blockers is associated with increased mortality [51]. Sodium polystyrene sulfonate should not be used on a chronic basis [11].

Sodium polystyrene sulfonate (SPS): SPS is an exchange resin [52]. It exchanges Na+ for K+ and binds K+ and Mg+2. It was approved by the FDA in 1958. Onset takes several hours. It is usually given with sorbitol and can cause volume overload. There are rare reports of colon necrosis [53]; therefore, SPS should never be used postoperatively or in patients with ileus or severe constipation. The dose is 15-30 g orally or 30-50 g as a retention enema. The FDA recommends that SPS is administered separately from other medications by 3 hours.

Patiromer: It was approved in 2015 by the FDA. This nonabsorbed polymer exchanges Ca+2 for K+ and Mg+2. Onset can take several hours. Patients should be monitored for hypomagnesemia. Constipation is the most common adverse effect [54]. Patiromer should be administered separately from other medications by 3 hours. Clinicians should be aware that significant binding occurs with metformin, levothyroxine and ciprofloxacin [55]. The starting dose is 8.4 g daily; the dose is adjusted weekly up to 25.2 g per day to achieve target K+ level. Patiromer was effective in patients with hyperkalemia and diabetic kidney disease on RAAS inhibitors for up to 52 weeks [56].

Sodium zirconium cyclosilicate (SZC): SZC was approved by the FDA in 2018. It binds K+ in exchange for Na+ and H+ [57]. Time of onset is 1 h. SZC should be administered separately from other medications by 2 hours. Volume overload does not seem to be a major concern [58]. The starting dose is 10 g three times a day for up to 48 h. The maintenance dose is 5-15 g daily.