Plasmacytomas can have different clinical presentations. They can be observed as a single tumor mass without bone marrow involvement (solitary plasmacytoma) or in the context over multiple myeloma. In rare instances plasmacytomas are triggered by invasive surgical procedures. These different types of plasmacytomas can be found in the same patient which suggests a special biology of the malignant plasma cell that facilitates the spread outside the bone marrow. Here, we report the unique case of a 37-year-old man with solitary bone plasmacytoma with soft-tissue involvement who progressed to multiple myeloma with a huge mass at the scar of inguinal hernia surgery performed 10 years before. Throughout the course of the disease, he developed extensive multiple paraskeletal and extramedullary plasmacytomas at different locations.

Multiple myeloma (MM) is a heterogeneous disease representing 1% of all human cancers [1]. It consists of aberrant plasma cell proliferation in the bone marrow resulting in bone disease, anemia, hypercalcemia or renal failure [2]. Furthermore, malignant plasma cells can escape the bone marrow microenvironment in form of plasmacytomas that can be classified into two categories according their origin: extramedullary (involving soft tissue or viscera with no contact with bone) and bone related (paraskeletal) [3,4]. Rarely, plasmacytomas can arise from sites that previously had suffered traumatic injury or any other invasive procedure [5].

Here, we report a case with SBP that progressed to MM as extramedullary plasmacytoma arising along the scar from inguinal surgery performed 10 years before the diagnosis of MM.

A 37-year-old male went to the medical consult because of progressive back pain. He had a past medical history of bilateral inguinal hernia repaired by open surgery 10 years before, with no other clinical conditions. His primary care center performed an MRI that showed T6 fracture with posterior wall displacement and a soft tissue mass surrounding the spine cord. There was no evidence of myelopathy or spinal cord compression. The PET/CT showed high metabolic activity in the T6 mass (standardized uptake value – SUV of 3.7) without other relevant findings. In this scenario, a CT guided biopsy showed an infiltration of plasma cells that were positive for kappa light chain in the immunohistochemistry (IHC) study. Given the suspicion of MM, he was referred to his local hematologist and laboratory tests revealed a serum M-protein of 6 g/L. The immunofixation was positive for IgA kappa and serum free light chain (FLC) kappa was 23.8 mg/L (normal range 3.3 – 19.4). Urine immunofixation was positive for kappa light chain. However, there was no proteinuria, and the rest of laboratory parameters were in the normal range. Bone marrow aspirate showed 7% of plasma cells with normal phenotype. With this data, the patient was diagnosed with solitary plasmacytoma of bone. He was treated with radiation therapy (36 Gy fractionated in 12 sessions) and then he was referred to our Myeloma and Amyloidosis Unit for follow-up. Four months later, the PET/CT showed complete metabolic response with persistence of serum M-protein of 8 g/L.

Eight months later, the patient complained of right inguinal pain and a palpable tumor. With the suspicion of recurrence of his past inguinal hernia, a CT scan showed a solid inguinal mass of 10x6 cm. The tumor biopsy showed a plasma cell infiltration with plasmablastic differentiation. IHC revealed CD56+, CD19-, CD117- with kappa restriction and 60% Ki-67 expression. PET/CT showed a mass of 1 cm3 with no contact with bone and high metabolic activity in the right inguinal hernia (SUV 4.8), as seen in Figure 1. The bone marrow aspirate had 10% of plasma cells and 38% of them had abnormal phenotype (CD38+, CD56+, CD19-, CD45-, CD27-, CD81+, CD117-). Cytogenetics by FISH analysis showed no abnormalities. At this time, new laboratory results showed serological progression: M-protein size was 27.9 g/L and serum kappa FLC had increased to 94.1 mg/L. Serum albumin and β2-microglobulin were 41 g/L and 2.1 mg/L, respectively. LDH and the rest of laboratory values were in the normal range. In this context, the patient was diagnosed with stage ISS 1 IgA kappa MM with extramedullary involvement.

The patient was included in the GEM12 trial. It consisted of 6 cycles of VRD (bortezomib, lenalidomide and dexamethasone) induction treatment followed by autologous stem cell transplant (SCT) and consolidation with 2 additional cycles of VRD. He achieved a very good partial response and started on maintenance treatment under GEM14 trial (lenalidomide, dexamethasone and ixazomib) achieving a complete response.

After 15 cycles of maintenance therapy, the disease relapsed with spinal cord compression that required urgent radiation therapy. Serum immunofixation was positive for IgA kappa and the electrophoresis showed an M-protein of 3.4 g/L. Bone marrow plasmacytosis was 11%, 91% of them with abnormal phenotype. Cytogenetic analysis did not show any high-risk abnormality. Given the poor prognosis and disease aggressiveness, he was treated with 4 cycles of D-PACE chemotherapy (dexamethasone, cisplatin, doxorubicin, cyclophosphamide and etoposide). He achieved complete metabolic response regarding extramedullary disease and serological partial response. Then, he underwent an allogeneic SCT from an unrelated donor with non-myeloablative conditioning.

Three months later, the patient had a persistent IgA kappa by immunofixation and 6% bone marrow plasma cells. However, the patient complaint of back pain and PET/CT showed high metabolic activity in multiple paraskeletal tumors localized at vertebrae, pelvis, ribs and scapulae. Additionally, a single plasmacytoma in the liver was observed.

In this situation, he was treated with 3 cycles of Kd (carfilzomib and dexamethasone). The re-evaluation showed that the M-protein size was 4.3 g/L and the bone marrow aspirate showed 3% of plasmacytosis. The PET/CT showed partial response in some of the previous paraskeletal plasmacytomas but development of multiple new paraskeletal plasmacytomas (vertebrae, ribs, pelvis, iliac) and multiple tumor masses in liver and pleura (Figure 2). Daratumumab monotherapy was considered as salvage therapy. After 3 cycles, he achieved a serological very good partial response. Moreover, the PET/CT showed partial response in both paraskeletal and extramedullary plasmacytomas. After 9 cycles of daratumumab, the PET/CT showed normalization of the metabolic uptake in all of them except in iliac plasmacytoma, which significantly increased with invasion of the gluteal muscles with high metabolic activity (SUV 13) Local radiation therapy followed by daratumumab were given for three additional cycles. 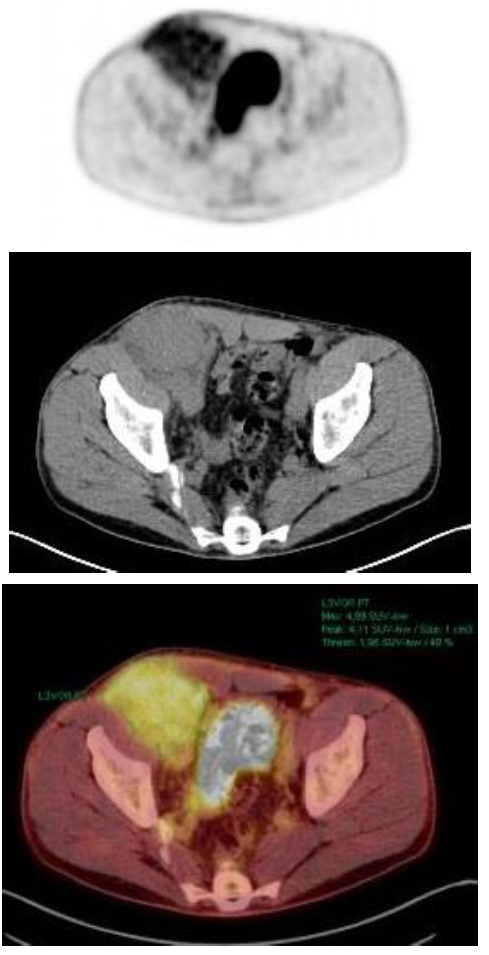 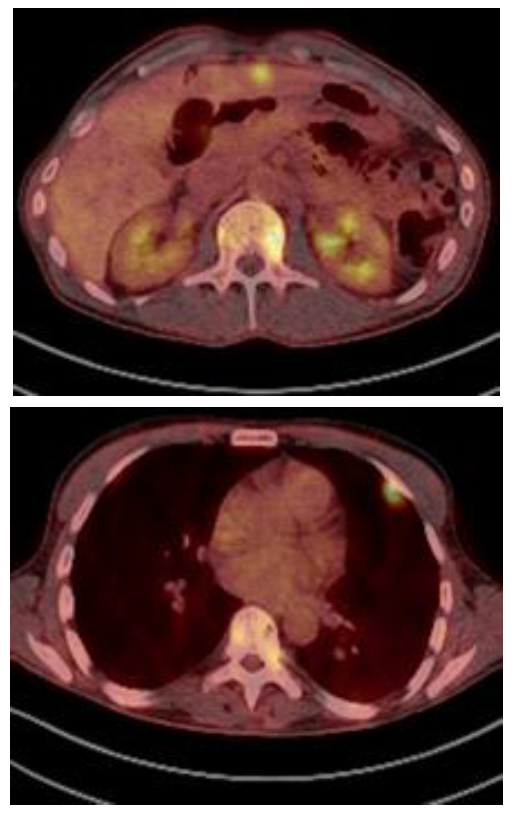 A patient that had SBP at T6 vertebrae with adjacent soft-tissue mass, resolved with radiation therapy, progressing to symptomatic MM with an extensive extramedullary plasmacytoma all along the scar from an inguinal hernia surgery performed 10 years before is described. Throughout the course of the disease, the patient presented successive relapses with paraskeletal and extramedullary involvement and finally died because of disease progression with extensive extramedullary spread.

The risk of progression of SBP to MM described for our patient varies around 65 – 84% at 10 years [6]. This could have been higher in presence of clonal bone marrow infiltration [10], additional lesions in the PET/CT [11] and an abnormal FLC ratio [12]. The patient did not have any of these adverse prognostic factors. However, and despite the good response of T6 plasmacytoma, he was still at high risk because of persistent M-protein of 8 g/L after treatment, as it is recognized that the presence of serum M-protein more than 5 g/L after treatment is a predictor of progression to MM [13,14].

MM is characterized by a proliferation of malignant plasma cells with a strong dependence of the bone marrow microenvironment. However, plasma cells escape the microenvironment influence resulting in extramedullary plasmacytomas. The most frequent are paraskeletal plasmacytomas resulting from tumor masses arising from focal bone lesions that disrupt the cortical bone while the remaining tumors result from hematogenous metastatic spread [4].

Sometimes plasmacytomas can be triggered by surgical invasive procedures performed during the course of the disease, such as laparotomy scars, catheter insertions or bone surgery [24-31]. The mechanisms of this type of relapse remain unclear but it has been suggested that the inflammatory process associated with tissue injury can facilitate the migration of myeloma cells into the skin or muscles and constitute a reservoir of dormant viable myeloma cells able to proliferate [32]. Supporting this hypothesis is a pre-clinical model of cells extracted from extramedullary disease that were injected to fetal bone graft and later developed soft tissue masses [33]. Of interest, the reported cases of extramedullary plasmacytomas in scars are always cases developing over the scars or procedures performed in the context of active MM. Our case is unique because the plasmacytoma grew from an old scar performed 10 years before the diagnosis of SBP. We can hypothesize that resistant plasma cells to radiation therapy migrate to the scar and proliferated resulting in an aggressive behavior. Of interest, this patient had no biology findings such as high-risk cytogenetics or CD56 negative plasma cells associated with extramedullary involvement [34,35].

In conclusion, we present a paradigmatic case of MM with extramedullary disease starting with an atypical plasmacytoma that grew on a scar. Clinicians need to be aware of this unusual disease presentation and more prospective studies are needed to clarify better the tumor biology and optimize treatment options.

There are no conflicts of interests to declare.