Introduction: Haemoglobin estimation is one of the most frequently investigated laboratory tests as it is the primary predictor of anaemia. Anaemia is a major public health concern in places all around the world as it is known to adversely impact energy levels. Aims and objectives of this study were to evaluate the prevalence of anaemia based on haemoglobin measurement among University students who participated in routine medical examinations 2009- 2011.

Method: Two hundred and seventy-two cases were included in a convenient sampling. Blood was collected in the standard K3EDTA purple top tubes. Samples were thoroughly mixed and haemoglobin estimation was done using the HemoQue Haemoglobin System. Commercial controls were run with each batch.

Conclusions: The anaemia prevalence is higher in female than in males, approximately almost twice as high. At the institution where the study was conducted, emphasis is placed on quality nutrition, a likely factor in stemming the prevalence of the more common dietary related anaemias. Nevertheless, more laboratory evaluations will be needed to determine the specific cause of anaemia in the student population whose haemoglobin falls below the WHO age and gender specific cut off points.

1. Introduction
Anemia is a serious public health problem that affects populations in both rich and poor countries. Although the primary cause is iron deficiency, it is seldom present in isolation. More frequently it coexists with a number of other causes, such as malaria, parasitic infection, nutritional deficiencies, and haemoglobinopathies [1]. Anemia affects person of all age, race, and gender, but is more prevalence in pregnant women and young children. There are many causes of anaemia including iron deficiency as a direct result low iron intake or poor iron absorption, increased blood loss due to menstruation, parasitic infections, acute and chronic infections such as malaria, cancer, and HIV. Deficiencies in other micro-nutrients such as Vitamin A and B12, folate, riboflavin, cooper can increase the risk of anemia.1 Iron deficiency is believed to account for approximately fifty percent (50%) of most cases of anemia [2], affecting more than two billion people around the world [3].

Iron deficiency anaemia adversely affects health, cognitive development, school achievement, and work performance [4]. Much of our understanding of human physiology, and of many aspects of pathology, has its antecedents in laboratory and clinical studies of hemoglobin [5]. Haemoglobin is the life-giving substance of every red cell, the oxygen-carrying component of the red cell and is one of the most frequently evaluated laboratory test.

Haemoglobin concentration is the most reliable indicator of anaemia at the population level, as opposed to clinical measures which are subjective and therefore have more room for error. Measurement of haemoglobin is relatively easy and inexpensive [1]. However, haemoglobin levels are affected by factors other than iron deficiency because haemoglobin is a function of RBC production and turnover. Haemoglobin levels therefore lack specificity for categorizing iron status [6].

Anemia may present with varying symptoms relative the immediate cause as well as it can go unnoticed for an extended period secondary to nonspecific clinical signs. Symptoms include paleness, anorexia, irritability, reduced attention span and psychomotor deficiencies. The effects of anaemia are believed to be far reaching than anticipated particularly as it relates to students and it may “be one of the causes of dropping behind in school test performance” [13]. This study was conducted to estimate the prevalence of anaemia among students of a university in central Jamaica who participated in routine medical examinations offered by the University in 2009 -2011.

2. Materials and Methods
Two hundred and seventy-two (272) students’ results were obtained by convenience sampling. One hundred and twenty-three (123) were male and one hundred and fifty-nine (159) were female. Subjects were undergraduate students of Northern Caribbean University aged between 17 and 36 years. Demographic information about the subjects was age and sex. Females who were menstruating as well as samples presenting with hemolysis were excluded from the study.

Following standard phlebotomy procedures, venous blood samples were collected in evacuated tube containing ethylenediaminetetraacetic acid (EDTA) and then thoroughly mixed. Haemoglobin concentrations were evaluated using the HemoCue Haemoglobin system. Disposable HemoCue Haemoglobin cuvettes were filled with one drop of blood obtained from each participant. The cuvette was immediately inserted into the cuvette holder of the HemoCue Haemoglobin System. The haemoglobin level was read directly from the meter display and the results were recorded in the appropriate database. As recommended by the manufacturer, the instrument was calibrated and controls verified.

Table 1: The Prevalence of Anemia by Age group and Sex

Further evaluation of the population deemed anemic (n= 74) saw none meeting the criteria to be classified as severely anaemic. On the other hand less than 1% (n=1) met the criteria to be categorized as moderately anemic while the remainder felt into the category define as mildly anaemic (n=15) (Table 2). The prevalence mild anaemia was higher in female than male, 86.67% and 13.33% respectively.

Table 2: Prevalence and gender distribution of anemia with respect to anemia classification

Using the independent groups t-test the mean hemoglobin for males was compared with that of the females in an attempt to establish if there was a truly significant difference. The difference was considered to be extremely statistically significant (p<0.0001) (Table 3).

Figure 1: Prevalence of anemia by age group and sex

Table 4: The mean Hemoglobin (g/dL) and Standard deviation by Age group and Sex 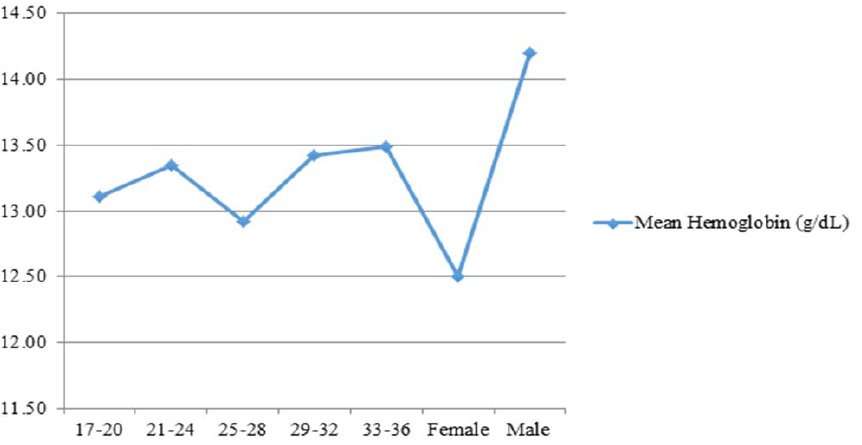 4. Discussion
Anemia prevalence for females in this study population was much lower than the estimated prevalence for college females in another study conducted in the United Arab Emirates (UAE) where the estimated prevalence was 26.8% with 84.6% being mildly anemic, 7.2% moderately anemic and 2.3% severely anemic(n=268) [11]. In a more recent study conducted on female medical students in Tehran (Iran), 144 of 237 participants presented with haemoglobin estimates less than 11.0 g/dL [12]. On the basis of the WHO cut-offs points, in this study, the prevalence of anaemia was 8.8% for the females whereas only 1.6 % of the men were anemic. This can probably be attributed to the 50% higher iron requirements of women than men due to monthly menstrual blood losses [10] as well as decreased energy levels and intake of dietary iron. In addition men require far less iron than women. For the men, the observed haemoglobin values were near the cut off limit established by the WHO. University wherein the study was conducted, aims at meeting the varying taste and nutritional needs of its student population and accomplishes this by providing nutritious meals in the cafeterias located on the main campus. This could be a very important factor in the relatively low prevalence of anaemia when compared to other universities around the world. Moreover, the population established as being anemic may very well comprise individuals whose underline cause of anaemia may be linked to other causes than nutrition example sickle cell disease. This however, can only be determined by further testing.

4. Conclusion
The anaemia prevalence is higher in female than in males, approximately four times as high. Further study is required on a larger sample of healthy university students to validate these findings and subsequently the development of direct educational and nutritional programmes to safeguard the health of these future mothers. In addition, it may be helpful to implement measures to improve nutritional knowledge and overall awareness among mothers and other workers who are potential mothers.