Hair - A Good Source of DNA to Solve the Crime

Most often hairs are picked up at the crime scenes and are used as contributing biological evidences in the crime cases. This can be helpful in determining the perpetrators of the crime and providing more information about what happened during the actual incidence. Hairs are commonly encountered in the forensic investigations and can be the good source of DNA. The optimal quantity of template DNA required for PCR based STR Profiling is about 1 ng and sufficient quantity may be present in the root sheath to prove the crime. In the present case, hairs were found in the fist of the deceased and they proved to be an important evidence that linked to the murderer. DNA was extracted from hair roots and profile was generated using PCR based STR Genotyping technology. The DNA profile obtained from the hair root matched with the DNA profile obtained from reference blood of the accused and proved his involvement in the crime.

When biological material is transferred between a perpetrator and a victim in violent crimes such as murder or rape, the DNA recovered from the crime scene as well as the biological material recovered from the bodies of the victim or accused has the power to potentially identify the perpetrator. Use of sufficient genetic markers enables individualization of the collected samples. The best identification including a high power of discrimination and rapid analysis speed has been achieved with STR (short tandem repeat) DNA markers. STR DNA profiling technology has emerged as the most accurate and trusted scientific method to prove the crime and to get justice for the victims. During analysis of sensitive cases such as murder, rape, theft or burglary, the presence of any biological evidence having a source of DNA helps the investigators to confirm the presence of the perpetrator at the crime scene.

In the crime investigation, hairs are commonly encountered and have proven as an important source of DNA which is helpful in establishing the scope of the crime [1]. Some of the hairs include the hair bulb which is composed of living cells that generate the keratin shaft. The bulb cells contain DNA (Figure 1). This DNA can help connecting the suspect to the weapon and the crime scene. Also, it provides a strong evidence if found over the body of the deceased or the accused. There is major role of crime scene investigator to check the crime scene thoroughly and collect all the evidences that can be used to solve the crime. Medical officers conducting postmortem also have important role of collecting all evidences over or inside the body of the deceased while performing the autopsy. Proper collection, preservation and timely submission of evidences are of utmost important while solving any crime case. Failure to comply with any of these parameters may cause the loss of important evidence and degradation of samples. Moreover, it might pose challenges while proving the case in the court. DNA profiling of the collected evidences provides the gender and genetic information of an individual.  The study of hair morphology provides information as to whether it has been cut or pulled out in a certain way. The amount of DNA within a single hair is often less than the optimal amount required for nuclear DNA markers. Most of the DNA is within a root sheath i.e. bulb with trace amounts of mitochondrial DNA in the shaft. PCR based STR genotyping using nuclear DNA targets highly repetitive DNA regions called microsatellites [2]. The quantity of starting template required for nuclear DNA profiling is 1 ng which may be present in the root sheath but not within the hair shaft. Mitochondrial loci are the preferred targets for hair shafts due to their higher copy number [3]. Analysis of DNA obtained from intact hair roots is now routinely performed in the area of forensic science [4]. Short tandem repeat (STR) analysis is regularly performed for generating DNA profiles from blood, saliva and hair samples encountered as evidence to solve the crime [5-8]. Traditional workflow for generating DNA profiles includes below steps:

Now-a-days, advanced instruments such as AutoMate Express and EZ1 Advanced which work on robotic principle are helpful to minimize the analysis time. Commercially available kits for amplification of DNA allow the faster turn-around time [9, 10].

In the case received in our laboratory (Forensic Science Laboratory, Nashik, Maharashtra), 6 to 7 hair strands were collected from the fist of the deceased male. Our laboratory is routinely performing nuclear DNA profiling on the hair roots. In this case, only two hairs were found with the hair bulbs which were used for DNA profiling and connected the involvement of the female accused in the crime.

A wide variety of methods based on different principles are available for extraction of DNA from the forensic samples. The phenol/chloroform extraction is one of the sensitive methods for recovery of DNA from wide variety of forensic samples. However, this process requires usage of large volumes of toxic phenol and chloroform solutions. Also it is tedious and time consuming [13]. The PrepFilerTM  Forensic DNA extraction Kit (Applied Biosystems, Foster City, CA) enables the isolation of DNA from biological samples that contain small quantities of biological material in such a way that it removes the substances interfering with PCR. Additionally, the extracted DNA is having sufficiently high concentration due to which the volume of extract for downstream analysis is minimal [14].

Quantification of the extracted DNA

DNA Extracted from both the hair and reference samples was quantified using Quantifiler® Duo DNA Quantification Kit [15,16]  on an Applied Biosystems 7500 Real-Time PCR System according to manufacturer recommended protocols. Quantified DNA was taken for downstream application.

The amplified DNA samples were kept at 60.0 ºC for an hour and then at 4.0 ºC till the separation of STRs (Table 2). PCR produces millions of DNA fragments of different sizes. Amplified products were separated and detected using 3500 Genetic Analyzer [19] and analyzed using GeneMapper® ID-X Software V 1.5. The separation of different fragments of DNA molecules on the basis of their sizes was achieved by capillary electrophoresis. Simultaneous amplification of 16 STR Loci was completed and analyzed [20, 21]. DNA profiles obtained were interpreted by comparing with each other. 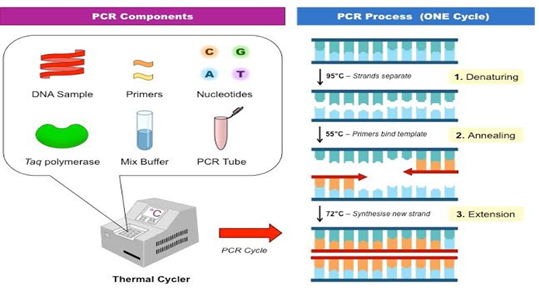 In 1984, Dr. Alec Jeffreys developed DNA fingerprinting technique used to identify the individuals. He found that certain regions of DNA contained repeated DNA sequences. The regions with repeat units that are 2-6 base pair in length are called Short Tandem Repeats. The first STR multiplexes developed was quadraplex created by Forensic Science Services (FSS) that comprises four STR Loci. Now-a-days, there are different multi locus commercial kits available and used by researchers to solve the crimes so as to give justice to the society.

In this case, the police received a call from a villager that an unknown male of about 70 years was found dead under the bridge of a river nearby village of Nandurbar District, Maharashtra. He had sustained head injuries and seemed to be murdered by someone. After observation of crime scene, police registered crime under the section of Indian Penal Code 302. From the mobile found in the pocket of deceased, police called his daughter. She told the police that her father who lived in Gujrat had gone to collect money from a female aged 40 who was residing in the village of Nandurbar district of Maharashtra. They had an illegal relationship. She convinced him to come to her place leaving Gujrat and invest his money in her farm as there was abundant water. He trusted her and gave about 2 lakhs for farming and also supported her relatives by giving loans to fulfill their needs. But later on, when he didn’t gain any profit in farming he asked her to return back his money. Instead of returning the money, she killed him on the bridge of river by hitting a pestle on his head and threw his body under the bridge with the help of her relative. During interrogation, the police asked her about the victim however she misguided them by saying that the victim had gone back to Gujrat. While performing autopsy, the doctors found a bunch of 6 to 7 long hairs in the victim’s fist. Morphologically the hair appeared of the female origin. DNA profiling of the two hair bulbs detected along with reference blood of the accused woman gave the DNA Genotyping Profiles which upon comparison concluded that both the DNA profiles are similar. Use of AmpFlstr® Identifiler Kit helped to get the nuclear DNA profile from trace sample. Thus the DNA profiling proved to be a strong evidence against the accused to get justice for the deceased and his relatives.

When the accused strongly denies the crime and only trace evidence is obtained to solve the mystery, it is skill of the analyst to get the DNA profile from the available biological sample without wasting it. Further, if the sample is received to the laboratory in proper condition, it becomes somewhat easy to perform the analysis. This is one of the most helpful techniques to solve the complicated heinous crimes.

Table 3: The results of DNA typing

We are thankful to the Director General, Legal and Technical, Mantralaya, Mumbai, Home Department, Government of Maharashtra, India for his guidance and encouragement all the time extended to us.